I have a feeling the media in general are getting their knickers in a bit of a twist. Anna Wintour's home is next door to what may turn out to be what Amal is using as an office in Sullivan Street.......

The doorstepping (quite literally sitting on the steps of the place) by the paps suggests to me that this is not their home. Anyone seen a couple of buggies leaving?

I also think that Vogue's May edition must be out any day and I suspect all these photo opportunities  lead to more human rights publicity. No harm done

There are no pictures of George arriving or leaving yet they were out to dinner last night.  We know George can go stealth but he cannot go invisible.  Amal is probably using the Sullivan place for work , it is probably easier for her to have meetings get her work done and go home to them. I also think that their new home is pap safe I don't think they would be allowed
to just hangout in front of that building.

@annemarie wrote:There are no pictures of George arriving or leaving yet they were out to dinner last night.  We know George can go stealth but he cannot go invisible.  Amal is probably using the Sullivan place for work , it is probably easier for her to have meetings get her work done and go home to them.

Here's plenty of pictures Annemarie.  I'm not sure where they are coming from or going.  Date nights continue... 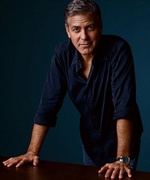 "Stony-faced" indeed!  Well, now we know where Amal's been getting her unusual leather coats from . . .


It has no doubt been something of a stressful week for Anna Wintour, after reports surfaced on Monday that she is set to leave her role as Vogue Editor-in-Chief after 30 years at its helm.
So it should come as no surprise that the 68-year-old fashion icon looked slightly stony-faced as she stepped out in New York on Friday, heading to visit the New York home of friends George and Amal Clooney, just days after the rumors of her alleged departure from Condé Nast were first made public.
But despite her somber expression, Wintour made quite the statement with her look, wearing a bold printed red, white, and navy midi skirt along with a silk patterned blouse. 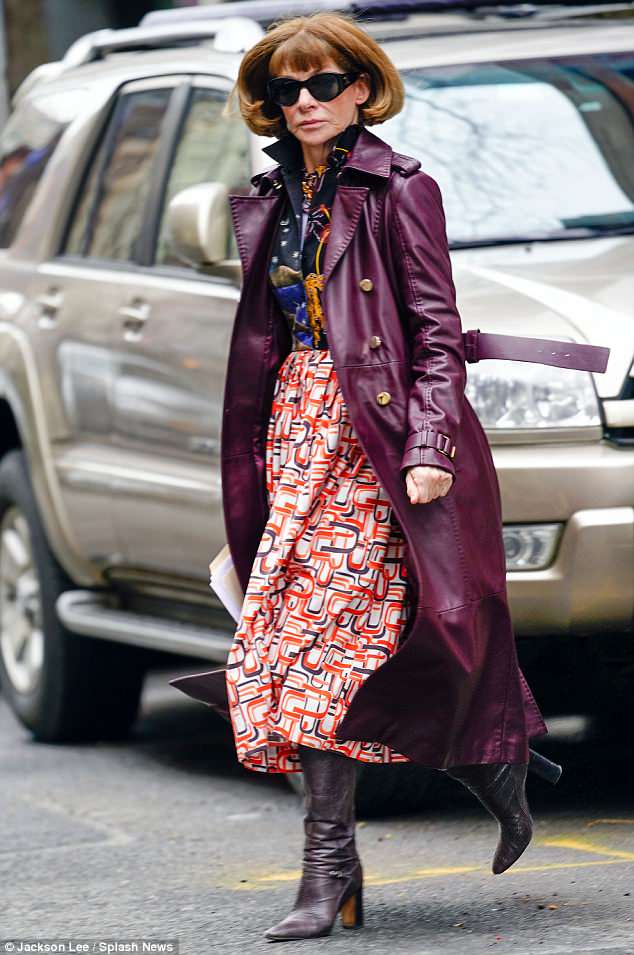 
Straight-faced: Anna Wintour looked rather somber as she stepped out in New York on Friday, days after it was reported that she is planning to leave Condé Nast this summer

Making a statement: Although she looked stony-faced, the 68-year-old's bold and colorful outfit spoke volumes
She topped off the colorful ensemble with a bold purple leather trench coat, matching purple heeled boots, and - of course - a pair of her signature sunglasses, an accessory which has become synonymous with the editrix.
Wintour's hair was styled in her trademark sleek bob, and she was seen carrying a manila folder filled with papers in one hand - perhaps part of the reason that she was paying a visit to actor George, 56, and human rights lawyer Amal, 40.
Although Anna is known to be close to the famously-private couple, and was one of just a handful of guests invited to their intimate Italian wedding in 2014, the meeting may well have been more about business than pleasure.
Earlier this week, it was reported that Amal had invited Vogue into the $14 million Berkshire home that she shares with her husband in order to do a sit-down interview with the magazine, while showing off the changes she has made to her newly-refurbished mansion.
According to The Mail on Sunday, Amal posed up for pictures taken by acclaimed photographer Annie Leibovitz, having borrowed a staggering $9.8 million worth of Cartier jewelry for the shoot.
A source close to the Clooneys told the newspaper: ‘This has been organised for a long while. It is Amal’s chance to do a sit-down interview and show the inside of her house.
‘It will be a really special piece for her. She and George have put blood, sweat and tears into getting their house to be perfect, so it’s the ideal location to do this.’ 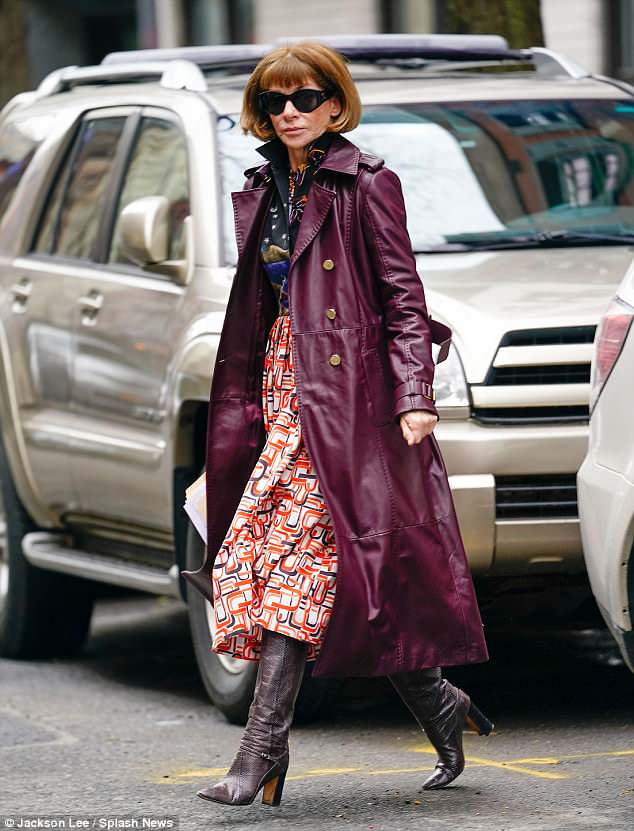 
Style staple: Wintour topped off her look with a purple leather trench coat, purple boots, and her signature sunglasses 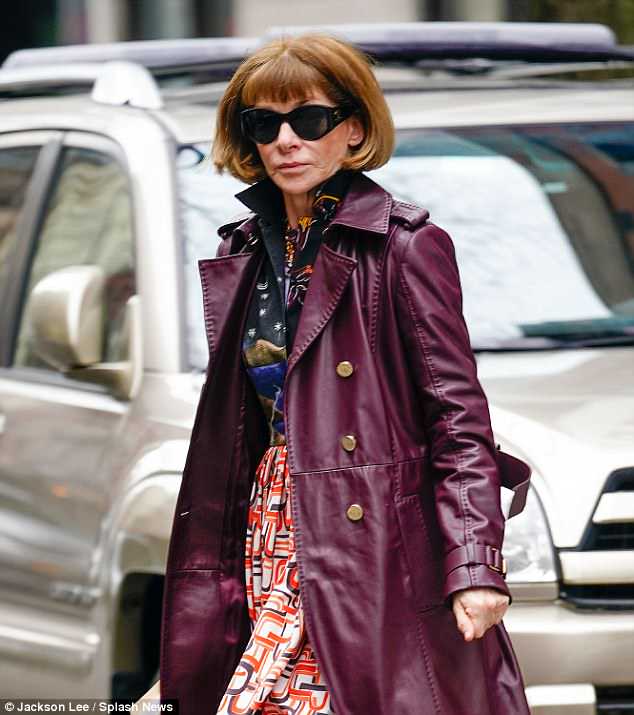 
Friends: Wintour was paying a visit to the New York City home of her close pals George and Amal Clooney 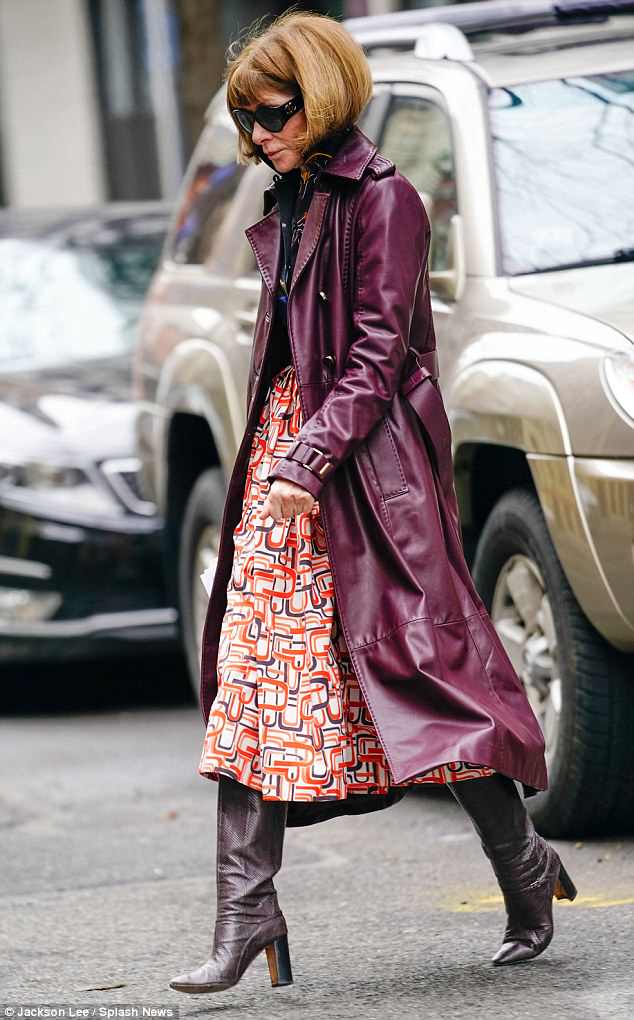 
Business or pleasure? Although the nature of the meeting is not known, it was reported this week that Amal recently posed up for a Vogue spread at her Berkshire mansion

A shoot with the notoriously-private Amal would certainly be a coup for the magazine - and would add yet another feather to Wintour's cap before she makes a departure later this year.
According to Page Six, Wintour will depart Vogue and Condé Nast - where she has served as artistic director since 2013 - after the July wedding of her daughter Bee Shaffer, 30, allowing her to go out in style, ending her time at the company with the publication's iconic September issue.
But while sources insist that Wintour's time at the company is coming to a close, Condé Nast has rebuffed the claims, with a spokesman telling Page Six: 'We emphatically deny these rumors.'
The company's denial has not stopped speculation, however, that it has a replacement lined up for the editrix - whose frosty demeanor earned her a host of less-than-flattering nicknames including 'Nuclear Wintour' and 'fashion's ice queen'.
Sources allege that Vogue UK Editor-in-Chief, and former fashion stylist, Edward Enninful, 46, is a frontrunner to take over the position at the US publication - despite only holding the role at its British counterpart for less than a year.
Page Six reports that there is nobody currently in place to take over her wider role as Condé Nast's artistic director.
Enninful would certainly be no stranger to the task of taking the reigns from a seasoned veteran, however; he was named as the rather surprising successor to British Vogue's former Editor-in-Chief Alexandra Shulman when she left the magazine last year, following a 25-year run at its helm. 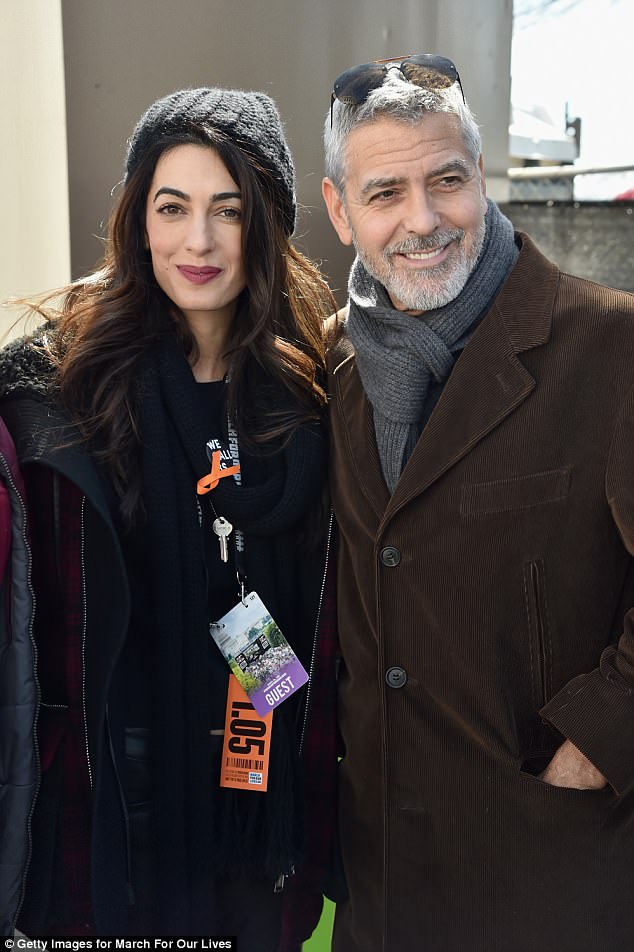 
Happy as can be: According to The Mail on Sunday, Amal opened the doors to her $14 million mansion in order to show off the refurbishments she has made to it 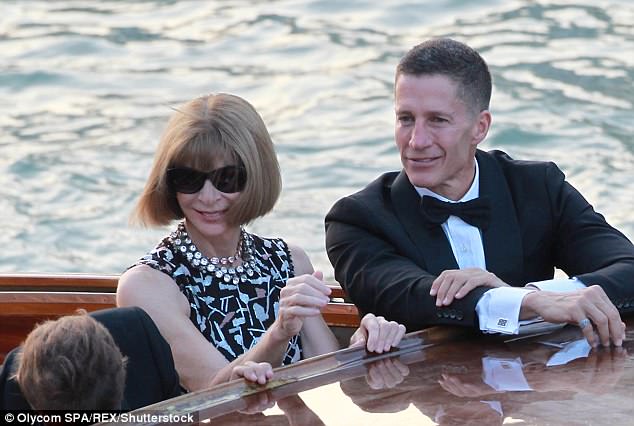 
Happy times: Wintour was one of just a handful of guests invited to attend George and Amal's Italian wedding in 2014 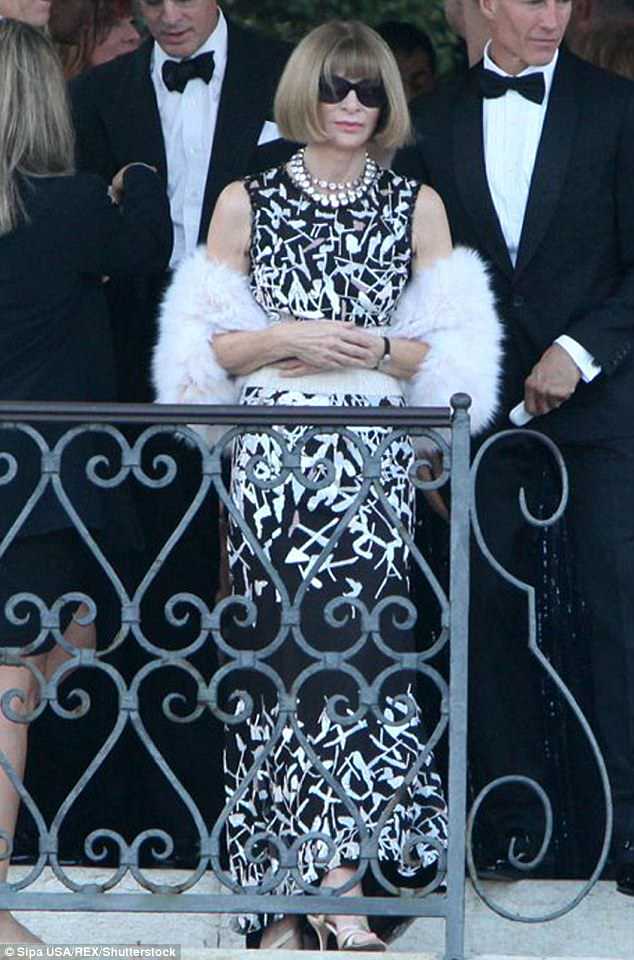 
Success: Landing a shoot with the famously-private Amal would certainly enable Wintour to go out with a bang - should she indeed leave Condé Nast later this year
It was suggested by many that the British magazine needed to be rejuvenated and re-focused as the industry continued to shift towards digital media, and print sales plummeted across the board.
However, sources allege to Page Six that Wintour's ousting may be the work of Jonathan Newhouse, chairman of Condé Nast International.
Newhouse, who is currently based in London with his wife Ronnie Cook, is expected by many insiders to be preparing for a move back to New York City in order to take over as Chairman of Condé Nast after the October death of his cousin Si Newhouse, who held the position for more than 40 years.
Si Newhouse was a long-time fan of Wintour's, and supported her throughout her time at the company, however one insider told Page Six that Jonathan Newhouse 'doesn't like [the amount of power] Anna has' within Condé Nast and is eager to see Enninful take over.
The current British Vogue boss might seem like an odd choice to some, however, given his lack of editorial experience; prior to his appointment at the publication, he had spent decades working as a fashion stylist.
Others say that Wintour, who is the daughter of the late Charles Wintour, former editor of the London Evening Standard newspaper, is hoping to secure a job back in her home England, such as leading the British Fashion Council, which is responsible for organizing London Fashion Week.
It was also reported while Hillary Clinton was running for president that Wintour - an outspoken supporter of the Democratic candidate - had hoped to secure an ambassador position in London if Clinton had won the election. 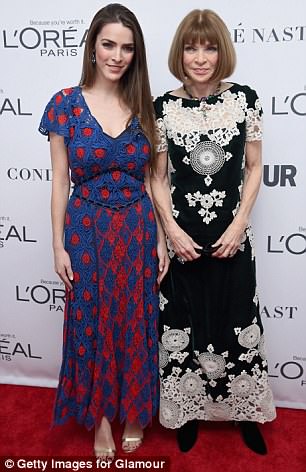 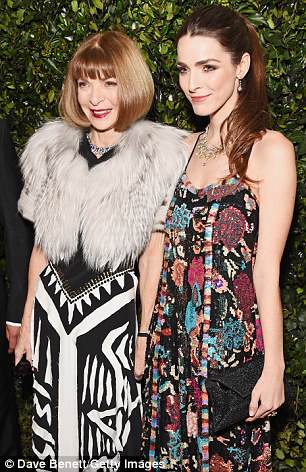 A special occasion: Wintour is said to be planning her departure for the end of July, after the wedding of her daughter Bee Shaffer, 30, to Italian-born director Francesco Carrozzini 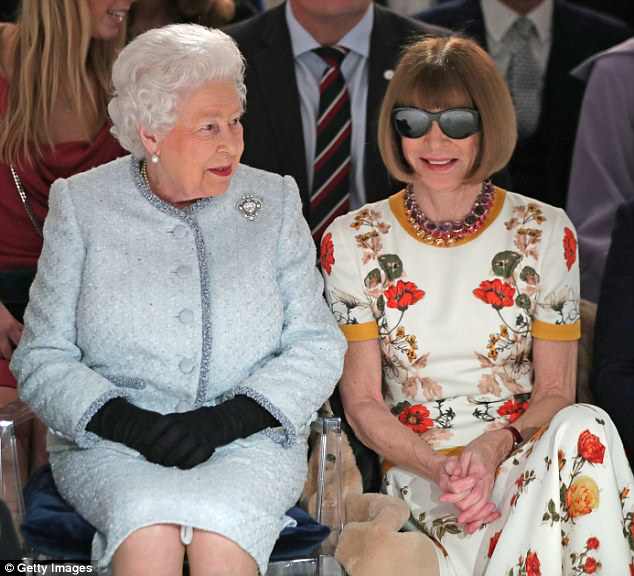 
Style queens: The editrix would certainly be going out with a bang, having sat next to Her Majesty the Queen at the royal's first London Fashion Week show in February 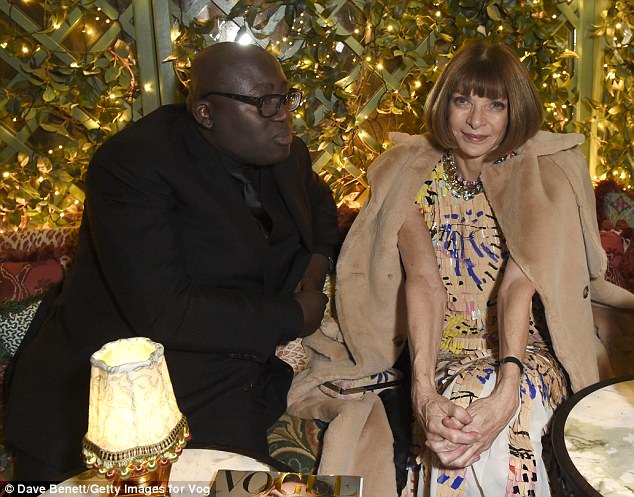 Handing over the reigns? It has been reported that Vogue UK Editor-in-Chief and former stylist Edward Enninful (left) is being lined up to take over the American version of the magazine
A move back to London would certainly see Wintour come full circle as far as her career is concerned; she started out working as an editorial assistant at the UK version of Harper's Bazaar in 1970, before she moved to New York and joined its sister publication in 1975.
She returned to London in 1985 to serve as the editor of British Vogue, a position that she held for two years before heading back to New York City.
However, she has maintained close ties with her home nation; she was made a Dame in the 2017 New Year's Honors, and in February of this year achieved a major victory on British turf when she arranged for Her Majesty the Queen to attend her first ever London Fashion Week show.
Once there, the royal was seated on the front row alongside a beaming Wintour herself.
According to reports, the surprise attendance of the Queen was arranged by Wintour and British Fashion Council chief executive Caroline Rush - a move that allegedly reduced British Vogue Editor-in-Chief Enninful to tears after he was kept in the dark about the royal's attendance.
Further controversy was then caused by the fact that Wintour failed to remove her signature sunglasses during the event, a move which many saw as being incredibly disrespectful towards the Queen. 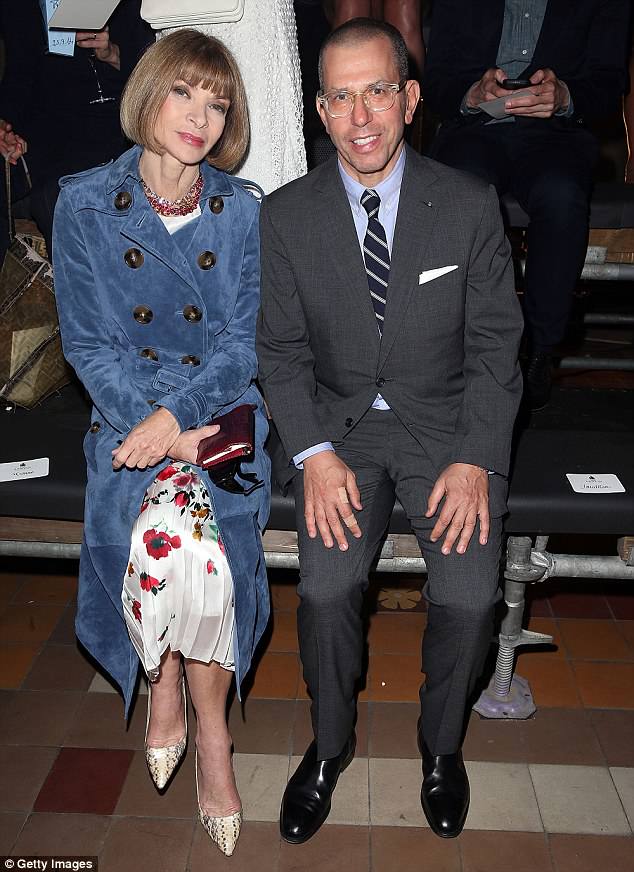 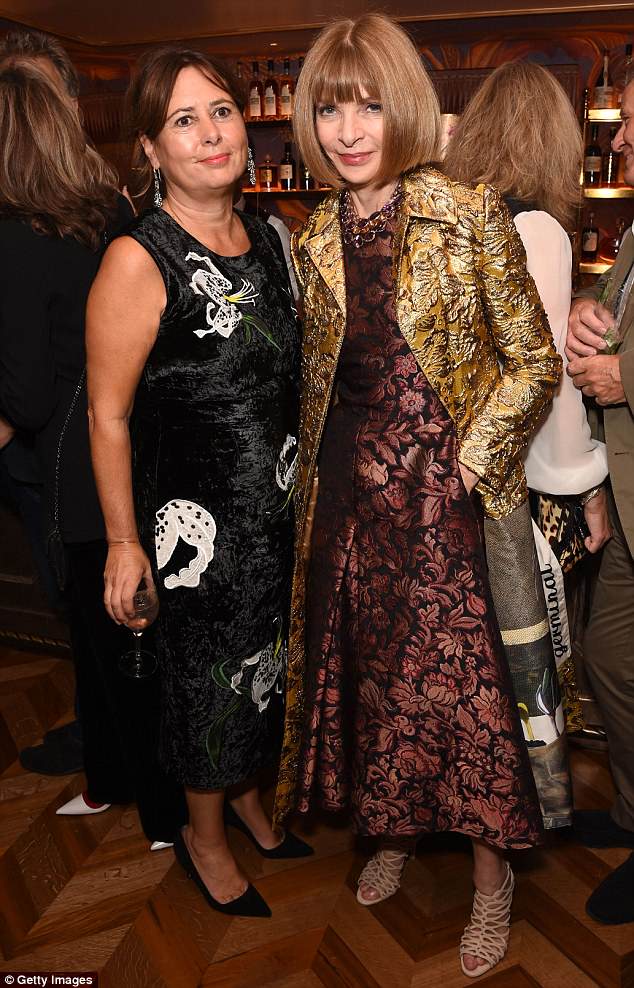 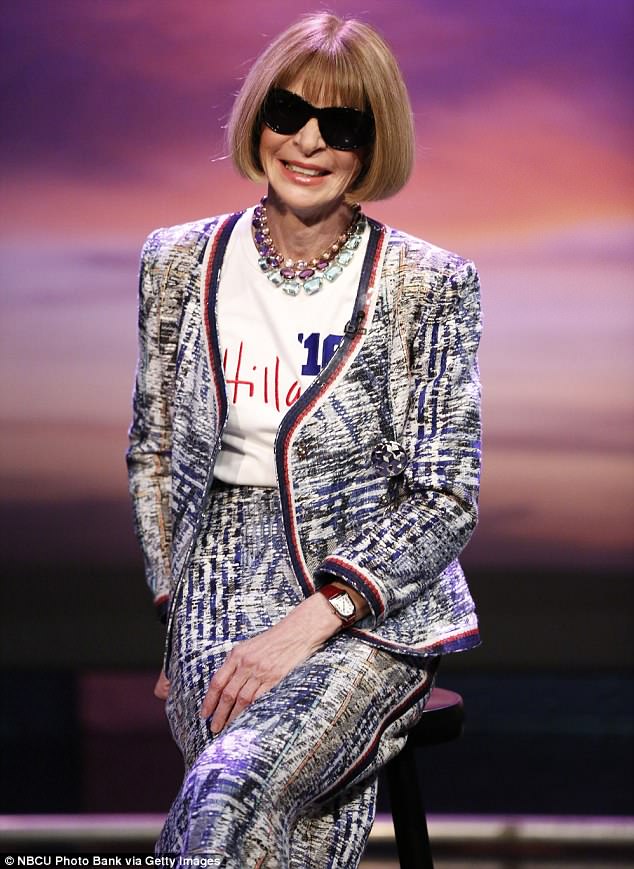 Something new: It was reported that Wintour, pictured in a Hillary Clinton tee in 2016, had hoped to secure an ambassador position in London if Clinton won the presidential election
Wintour's departure is reported to come as Condé Nast is considering a major financial review, with sources claiming that consultants are in the process of reviewing how the company can best move forward in the changing media climate.
Condé Nast has certainly struggled as the industry as shifted, shutting down the print editions of Teen Vogue, Self, and Details in the last year alone. Insiders told Page Six that the company is losing a staggering $100 million a year.
In the UK, Glamour magazine made a move towards a 'mobile-first, social-first' focus, cutting back on its print issues, which are now only published twice a year.
Wintour's exit would also come in the wake of several magazine closures and the recent stepping down of several other long-serving glossy magazine editors, including Vanity Fair's Graydon Carter, who spent 25 years at the publication, Glamour's Cini Leive, and Allure's Linda Wells within Condé Nast alone.
It is even being reported that Wintour's exit interview with the New York Times has already been arranged.
The Times also interviewed Carter and Leive after they left their magazines following decades-long stints. [/size]