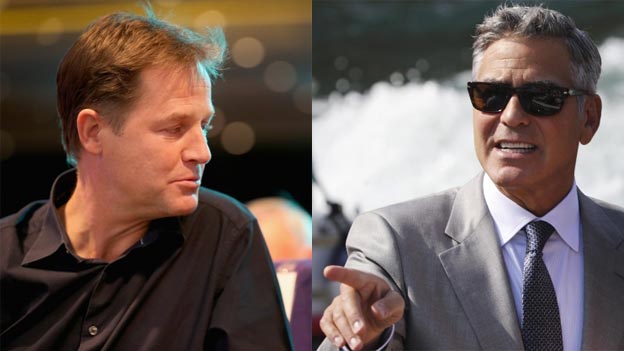 Nick Clegg's wife Miriam has said she would like George Clooney to play her husband in a TV movie about him.

Channel 4 is said to be planning a drama based on the coalition negotiations following the 2010 election, with the Lib Dem leader, who went on to be deputy PM, as its focus.

Actors including Ricky Gervais, Dan Stevens and Benedict Cumberbatch have been linked with the role.

But Mrs Clegg asked on ITV's Lorraine: "Is George Clooney on offer?"

She added that she would prefer "a handsome one" to play her husband who, during those days in May 2010, was at the centre of a phenomenon known as Cleggmania, following his appearances on TV leaders' debates with Conservative David Cameron and Labour's Gordon Brown.

Voters had failed to give any party a majority in the House of Commons, leading to days of negotiations.

The Cleggs were both guests on Lorraine.

There are some domestic similarities between Mr Clegg and Mr Clooney, whose films include One Fine Day, O Brother, Where Art Thou? and The Men Who Stare at Goats. 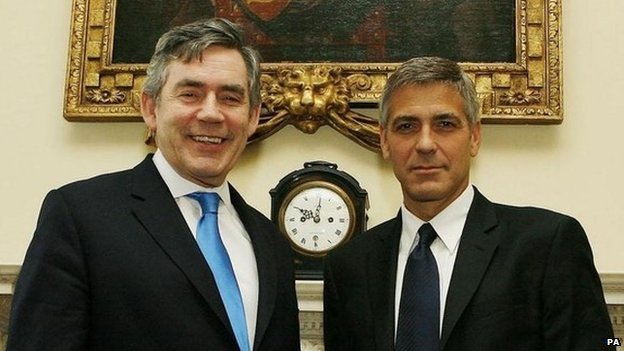 Getting into character? George Clooney visited Downing Street in 2008

The deputy prime minister's wife, who uses her maiden name Gonzalez at work, is a lawyer specialising in trade agreements.

Mr Clooney married London-based human rights lawyer Amal Alamuddin in Venice in September. A political activist himself, he is seen as being on the liberal wing of the US Democratic Party.

Mrs Clegg, who has set up a campaign in which leading women visit schools to inspire girls in their careers, ruled out entering front-line politics herself.

She said: "I hope this doesn't come back to haunt me in the future, but I think you need a lot of emotional strength to be in politics and I don't know if I have it."

Politicians were later asked on BBC Radio 4's World At One programme who they would like to play them in a film of their life.

Lib Dem equalities minister Jo Swinson said: "Given the work that I do to promote the role of women and equality and given the absolutely brilliant speech that she recently made at the United Nations setting out the cause of modern feminism, I think Emma Watson would be magic."

For Labour. shadow health secretary Andy Burnham said: "First thing that strikes me there is how does Nick have a wife who is still so flattering towards him? I can't get my head around that.

"Given that, whenever I appear on TV, I get a lot of people on Twitter saying I look like a Thunderbird, I guess I should probably get a puppet to play me."

This woman sure sees her husband through rose-tinted shades, doesn't she?

Love is a derangement of the brain chemicals, which apparently affects vision.