Re: George and Caoilinn Springall talk to Variety

[size=31]George Clooney and Caoilinn Springall on the Silence of ‘The Midnight Sky’ and Filming in Iceland
The Oscar winner and 7-year-old newcomer discuss shooting on a glacier in 40-below weather.
By Clayton Davis 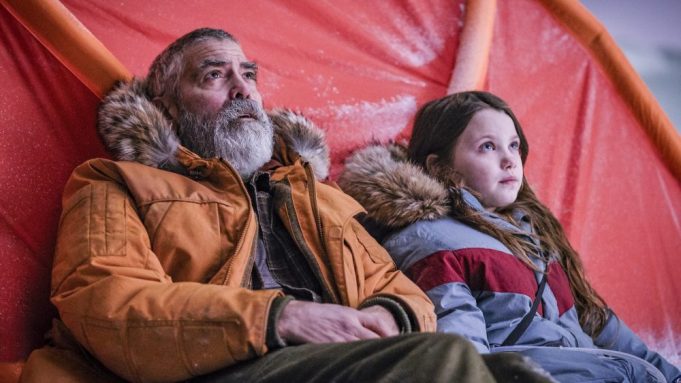 Courtesy of Netflix[/size]
Oscar-winner George Clooney and Caoilinn Springall barely speak in Netflix’s “The Midnight Sky,” but the two were able to convey their emotions. Clooney, who directs, produces and stars, takes on one of the most the most challenging and demanding films of his career, doing a lot of preparation and taking into account many unknowns. One of those unknowns was put to ease when he discovered 7-year-old Caoilinn Springall and cast her as Iris.
When Springall showed up for shooting on a remote glacier in Iceland, she had only seen one previous Clooney film, “Fantastic Mr. Fox,” which the actor jokes is the only film of his that she’s allowed to see.
In a joint interview, Clooney talks about helming the project and shooting in some of the coldest conditions on Earth, and Springall introduces herself to the Hollywood world. 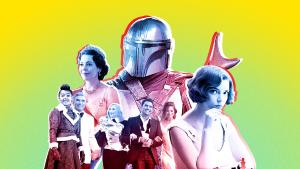 ‘The Mandalorian’: A Hit So Big Even Netflix Can Respect It 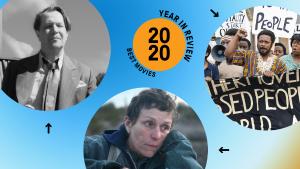 What was it like shooting “The Midnight Sky” in such remote and cold conditions?

George Clooney: The movie is a two-hander. It’s in space, and it’s the stuff with Caoilinn and I. We shot all our stuff first. The very first thing we did in mid-October was we went out to Iceland and went out onto a glacier. We were at the mercy of the weather. We needed bad weather. Sometimes you would get out on that glacier, and there would be perfect blue skies. We’d be watching [the monitors], and you could see this white dust storm coming toward you. We’d all have strings tied to one another. They gave us whistles to blow in case we got lost from one another. I would be holding Caoilinn’s hand, and then all hell breaks loose, and you just can’t see or hear each other. My eyelashes would freeze shut, and Caoilinn had these big goggles on, wrapped up and getting blown over and knocked down to the ground. We were digging ourselves into holes in the ice, and we would walk down to an ice cave. It looks like a set, but that’s a real ice cave, way down, and Caoilinn was a trooper.
Caoilinn Springall: It felt a little bit weird. At first, you’re digging it with a shovel and then just digging with your hand. And then he’s like, “Come on, let’s do the scene, and sit in this hole.” And then we would film it. It was very cold.

How did you find the balance between directing yourself and acting in this harsh place?

Clooney: First and foremost, you have to be really, really prepared. We knew we were going to Iceland in October, so it gets light around 11 a.m., and it’s dark by 3 p.m. And Caoilinn being a certain age, she only has a certain amount of time that you can shoot with her. Then you add the element of chasing weather. We get in a scene, and all of a sudden, it’s too sunny or too nice. Or then we get there, and it wasn’t nice enough. I’ve been doing it long enough now that it’s not as complicated as it feels. It would get 40 degrees below, and then the wind chill factor, 70 m.p.h. gusts. It was the hardest shoot.

How are you doing in regards to the COVID-19 pandemic?

Clooney: We’re all getting by. Certainly, in the United States, we’re still all having these shared experiences. I miss my parents. I miss seeing the people who are dear to me and care very much for and am concerned about. I’m very lucky. I’m here at home with my kids and my wife, and we’re safe.


Springall: At the beginning of the lockdown, I felt a little bit trapped because I couldn’t go outside. And had all my learning on screen, and it was a little bit tricky because sometimes my mom and dad were at work. Sometimes I would ask my sister, and she would not help me.

Caoilinn, how did you get this part?

Springall: We did an audition in London, and I didn’t expect anything. And then we got a phone call to meet George, Grant [Heslov] and the casting director. I was pretty excited and a little bit nervous. I went numb. George told me to do this important scene as Iris, and then we waited a couple of weeks. Then we got the phone call that we’ve got it, and I was jumping up and down. And then I found out that we were going to Iceland, and I was sad that I would leave my family behind, but at least I was going to Iceland.

How did you decide which parent went with you to Iceland? 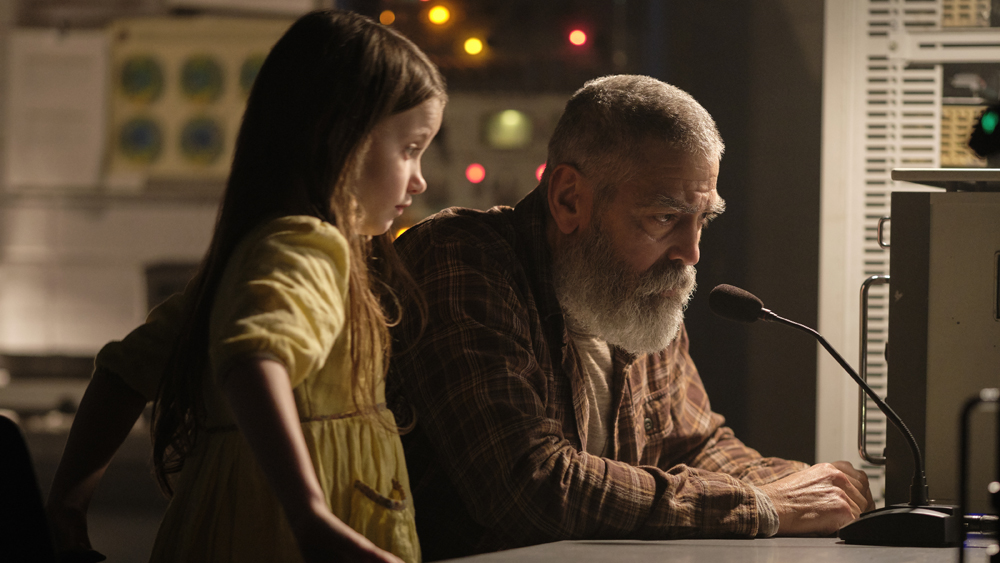 George, a lot of changes have happened for you in the past few years. You’re a father now, and there’s a scene in the film where you are looking for Caoilinn, yelling, “Come to my voice.” I call it the “parent wail,” meaning you can only scream like that if you have kids. Do you think you could have done this role 5-10 years ago?

Clooney: You don’t go through life without being affected by children. I have two three-year-olds. And yes, you’re absolutely right. The sound of that loss was devastating when we did it, and it was devastating to cut it together. In general, there’s a part of this film that is about isolation and our ability to communicate, and our inability to be near the people we love. And that is a very specific example of taking away and losing something you care deeply about. I’m lucky my kids are three, so I don’t have to deal with teaching them trigonometry on Zoom. But it’s a tremendous responsibility, and you understand that nothing matters more than them.

You’re going to be 60 this coming year. This is the largest and most personal film you’ve ever done. What are you seeking at this point in your life, creatively?

Clooney: First, it has to be something that you’re willing to spend a year or two of your life on. It has to start with a story you’re interested in. At the time I was pitching the story, I wanted to do it as a meditation. I didn’t want it to be lots of banging and smashes. I want the silence to be important. I wanted it to deal with things we’re all dealing with today: the denying of science, playing out anger, hatred, and divisions in between the people of the United States, but also divisions that play out in other countries like the Philippines or Hungary. And if you play those out, 30 years from now, it’s not inconceivable that the whole world could look like that. We patterned after the satellite views of California, the wildfires, and then we got COVID. And it became much clearer and changed the way we edited and told the story. Our ability to communicate and be near the people we love, and how deeply that affects us when we can’t, is so deeply important. With the end of it, having some hope, some redemption. It can’t just be all this nihilistic.

Can you talk about working with composer Alexandre Desplat, whose score is probably my favorite of the year?

Clooney: I’ve done eight films or so with Alexandre. We’re really dear friends, and we talked about instrumentation and what we wanted to do. I had a lot more lines, and I started taking lines out because Caoilinn doesn’t speak. And if she’s not going to speak, and I’m taking out lines, I called him and said to Alexandre, “You’re going to write a lot more music than you’ve written for the movie. The score is going to have to tell the story.” I called him and told him there’s a sequence with the astronauts laying inside this room, and I said, “The blood is going to be dancing…moving, like a ballet.” So he’s writing the music in France, and he says, “You want me to write the music for a ballet of blood?” [laughing] And without even being able to see the effects, he wrote this beautiful piece of music for it. He’s just one of the greatest composers in the game ever. And we had to record it in COVID. I’m editing from my room at home. Alexandre couldn’t get into England where we were doing it at Abbey Road. He’s conducting it from Paris via Zoom while recording it with the orchestra in Abbey Road. But they can only do 15 musicians at a time. So I’m here at four in the morning with Grant, watching it live in LA, sitting in a chair, with like three different Zooms going. And we had to piece it together.

Can you talk about Grant Heslov, your long partnership with him and the upcoming “Calico Joe?”

Clooney: We’re working on the script right now. It’s a pretty cool thing. You should read the book; it’s a really easy read. It’s a really great story. We got this call from Bob Dylan saying, “I optioned a John Grisham book, do you want to adapt it?” And I was like, “Work with you? We’d love to.” We’re working on that now. And we’re in pre-production on “The Tender Bar.” So we’re going out to Boston if COVID lets us produce.


It’s always been Grant. It’s a true story, he gave me 100 bucks to get headshots in 1982. He was 19 years old. He had just done a guest spot on “Joanie Loves Chachi.” He was working, and I was sleeping on the floor of a closet of another friend’s apartment. We’ve looked out for each other over the years. We acted in plays in the early 80s, and he said, “I don’t want to rely on being an actor in my adulthood.” And I said, “Let’s make it official and come over and work at Section 8.” We’re a funny pairing. He’s my best friend. We’ve never had a disagreement, much less an argument. He would sit by the monitor when I’m shooting myself. You tend to not do a lot of takes on yourself, just out of modesty. So I would go, “Okay, that’s fine.” Grant will stick his head out and say, “Do another take, schmuck.” And I’ll say okay. We’re lucky.

Caoilinn, what did it feel like to see yourself in a movie?

Springall: It felt a bit weird. My sister saw it, and she said, “Caoilinn, look at your big head.”[/size]