Nice.  First of the 'big' interviews to promote The Midnight Sky is out:

The Oscar winner on recovering from Trump, helping Amy McGrath, and deromanticizing the Confederacy: “You don’t just get to fly that f--king flag.”
BY ANTHONY BREZNICAN
OCTOBER 22, 2020 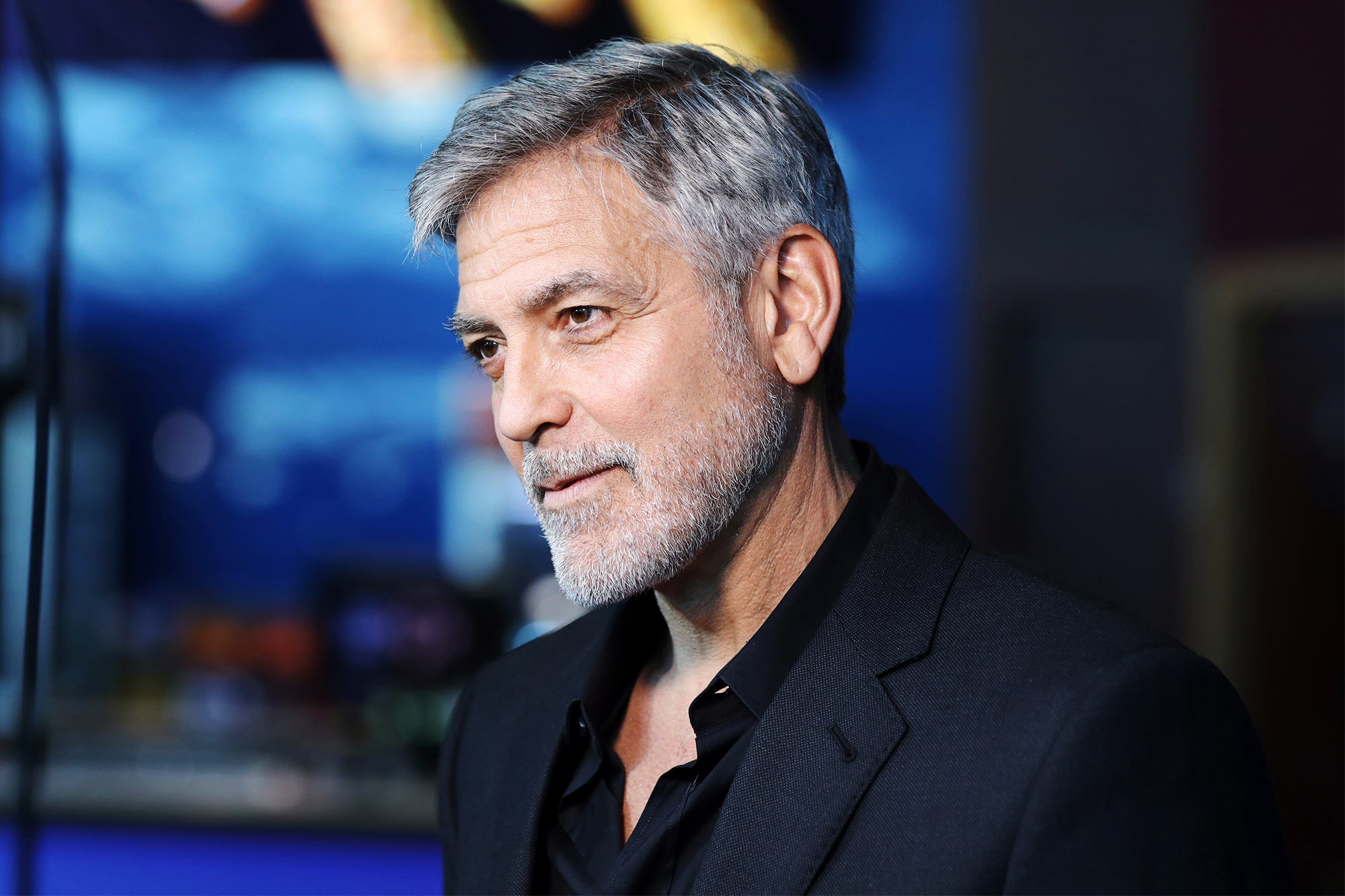 BY GRANT POLLARD/INVISION/AP/SHUTTERSTOCK.
Growing up as a Democrat in Kentucky helped George Clooney get used to fighting impossible battles. With the presidential election fast approaching, the activist and actor says progressives should not give up on fighting for deep red states—even if the challenge seems insurmountable.

In the case of his home state, there’s fierce debate about whether it’s worthwhile to donate to the senate campaign of Democrat Amy McGrath as she seeks to unseat Republican Senate Majority Leader Mitch McConnell. Millions flowed into her war chest after the death of Supreme Court Justice Ruth Bader Ginsburg, whose replacement McConnell is fast-tracking in defiance of his own previously established rules about not holding such hearings in the run-up to an election.

Some pundits have warned that McGrath is too much of a long shot to justify the flood of support. But Clooney said Americans who want to change regions like this for the better have to put in the effort, despite the odds.

“I’ve always been involved in Democratic politics, since I was raised a Democrat in Kentucky. So imagine how much fun it was for me,” said the actor, whose mother was active in city politics while his father ran unsuccessfully for congress in 2004, in an interview with Vanity Fair about his upcoming film, The Midnight Sky.

Clooney compared losing elections to his many years advocating for human rights in Africa.

“Here’s the idea behind supporting someone even though you’re going to lose,” he said. “I’ve been arrested in the Sudanese embassy in Washington D.C. I’ve been fighting to take [former Sudanese president] Omar al-Bashir to the [International Criminal Court] for years. All of those things, every one of them, was futile. I got an award by the Nobel Laureates at one point. There’s the Dalai Lama standing there, handing you this plaque, and my speech was about how we’ve never won. We’ve never succeeded, we’ve never accomplished. People are still dying in Sudan, and Darfur, and South Sudan.”

“Every speech was: ‘We’re not winning, but that doesn’t mean we don’t keep the fight up. It doesn’t mean you don’t keep doing it,’” he said. “Now, a few weeks ago, I saw Omar al-Bashir in the docket, and he’s in jail. Yes, it took 20 years, but guess what—it happened.”


The same principle applies at home. “Of course you fight the losing fights, and of course you go into them fully expecting that you’re going to lose this fight,” Clooney said. “But that’s how democracy works. You fight it, and fight it, and at some point it changes.

Clooney cited Theodore Roosevelt’s 1910 “Man in the Arena” speech as a source of inspiration.

“All he says is: get in. You get your face dirty; you’re going to lose. And when you lose, people are going to stand out there and make fun of you,” Clooney said. “The people out there, doing that [mockery], will never know the agony of defeat, but they’ll never know the great victories. They’ll be the timid souls on the sideline. That’s the truth. You gotta get in; you gotta mix it up.”

“I have always been very involved, politically. I believe in it. I think it’s your civic duty to do,” he added.
Clooney thinks the political situation now is worrisome, obviously, but it can still change for the better.
“It’s going to take a while,” he said. “We always think that every time there is division in the United States, that it’s never been this bad. I say, go watch the documentary about Bobby Kennedy on Netflix. I think it’s six episodes. Just watch how the White House had buses parked around it to protect it from people being able to get up close to it. And people being shot in the streets and on campuses, particularly in ’65 and ’66 and ’68, and how deeply torn and violent and angry we were. Much more so than now, even though we see a lot of anger. And yes, it’s amplified by your ability to do all this on the internet and misinformation you’re getting. There was still a lot of misinformation and still a lot of anger.

“There’s certainly no more anger or resentment than when we actually killed 400,000 Americans in a civil war,” he added.

some Americans are still literally flying the flag of that conflict, something that became increasingly abhorrent to Clooney as he got older. “When I was growing up, I didn’t pay much attention to the Confederate flag,” he said. “Hell, The Dukes of Hazzard had it on the top of their car.

“But the truth of the matter is, if I was Black I would have known exactly what it is,” he continued. “It shows you how different the experiences are. We were big liberals in Kentucky, you know, and still we were missing the point. I wasn’t flying a Confederate flag, for chrissakes, but now you look at it and go, ‘Okay, guys, you’re defending the flag of a group of people, an entire section of this country that were traitors to the country, who went to war against our country and lost. With that flag! And they went to war for slavery—and lost.’ So you don’t just get to fly that fucking flag.”

If good people keep up the fight in this election and beyond, Clooney believes things will get better. “I look at it as this is one of our worst moments. It’s not our worst. We will survive it. We survived the others. In general, what’s going to have to happen is, bit by bit, the most extreme of these groups will fall by the wayside and we’ll get tired of hate, as we do. We have found ways around it.

“I think we need to solve deeply ingrained injustices. There is not a single person that can actually look at facts and think that if you’re Black in the United States, your life, particularly in the justice system, is equal.  Sentences are longer, they’re harsher, the paroles are longer, the arrest rate is higher. There’s no version of it that is equitable. We’re going to have to adjust these things. It can’t just be words.”
But words can worsen things, Clooney said. Especially when spoken by Donald Trump.

“The truth of the matter is, the United States has always been a tinderbox. We’ve always had a portion of the country that has issues, anger, and, in general, we usually have presidents who try not to foment that anger. We try to find common ground and peace,” Clooney said. “[Now] we have someone who is taking a blowtorch to it. You’re seeing 35% of the country getting furious. When we have someone not like that, things will calm down somewhat.”

He said Trump squandered a chance to unite people during the pandemic. “If Trump had come out early on and said, ‘Listen, this is bad. It goes through the air’—which we now know he knew in March—‘everybody should wear a mask.’ If he did it, and everybody did it, there wouldn’t be one single MAGA person in the world saying we shouldn’t wear a mask. They wear seatbelts and they wear helmets on their motorcycles. You can scream, ‘Freedom!’ and smoke until your lungs turn black, but you can’t smoke on the subway, where you fuck somebody else up. You can drink until your liver falls out, but you can’t drive a car while you’re doing it. Your freedoms aren’t allowed to affect everyone else’s freedoms.

“Usually a good president would go, ‘Guys, here’s what we gotta do,’ and you do it. It’d be easy. The dumbest thing about this guy is that he was given this golden opportunity in the pandemic to come out and go, ‘All right, this has never happened before, so we’re all going to join together and do this together, and we’re going to pull this off and save the country.’ And the liberals would have had to side with him. Instead, he did the opposite.”

A rational and intelligent statement. I hope he's putting some of his money behind Amy McGrath. Even if she doesn't win, if it's close enough to scare McConnell he might be a bit more willing to work across the aisle. IMO he's a traitor and even more dangerous than drumpf.

Was there more to the article? Seems like he didn't even mention the movie.

Thanks for that feedback. As a Brit, I have to be honest and say that I've no idea who any of these people are.

There was a separate review of the film, which Annemarie (I think) had already shared in the The Midnight Sky section.

Katie - I wish I didn't know who they were either, but we're stuck with them - at least for now. Mitch McConnell is the longtime  Republican senator from Kentucky and  Democrat Amy McGrath is challenging him in this election. I don't know if she has a chance, but she's doing better than anyone expected and is giving McConnell a run for his money.

I'll check the other thread for the review.