Demonstrators gather in Sudan's capital of Khartoum Friday as the Sudanese protest movement has rejected the military's declaration that it has no ambitions to hold the reins of power for long after ousting the president of 30 years, Omar Hassan al-Bashir. (Anonymous/AP)

By George Clooney and
John Prendergast
April 14 at 7:29 PM

[size=19][size=20]George Clooney and John Prendergast are co-founders of the Sentry.[/size]

For the past decade, governments around the world lined up to legitimize the regime of Omar Hassan al-Bashir in Sudan — even as it continued to attack civilians in Darfur, burn Christian churches, deny food to areas of the Nuba Mountains, provide support to extremist groups, and arrest and torture protesters. Instead of confronting these abuses, the United States, the United Kingdom, the European Union, the African Union, China, Russia and Persian Gulf countries all sought ways to strengthen relations with his government.

Only one constituency stood up to Bashir and his allied generals: the Sudanese people themselves. After years of organizing and resisting, Sudan’s pro-reform social movement catalyzed protests across the country, resulting in a “palace coup ” on Thursday . Bashir was replaced by his ally and defense minister, Awad Ibn Auf, who has been sanctioned for his role in genocidal crimes in Darfur. The next day, he was replaced by another military leader, Gen. Abdel-Fattah Burhan.

This chain of succession is a move straight out of the autocratic playbook, in which a regime perpetuates itself by changing the figurehead at the top without changing the violent, corruption-fueled system beneath.

The protesters were not fooled, and they have continued their mass demonstrations despite warnings and curfews from Ibn Auf and conciliatory appeals from Burhan. Though Burhan has said the military council would name a civilian prime minister and cabinet, he has not committed to installing a civilian president. Allowing the army to oversee a transition to democracy, even in a more limited capacity, would be like having the foxes oversee improvements to the henhouse and could undermine efforts at rooting out corruption and state-sponsored violence, the twin hallmarks of three decades of military rule in Sudan.

The threat of major violence is real. For more than a dozen years, we have traveled together throughout war-torn areas of Sudan, hearing stories of death and destruction. The main perpetrators of nearly every violent assault that survivors described were the dreaded “Janjaweed” militias, government-supported gangs incorporated into the regime’s security services and recently deployed to protester strongholds.

Despite these concerns, Bashir’s removal is evidence of a crack in the foundation of the diseased system. The international community now has a second chance to correct its past policy failures and side with the Sudanese people’s demands. Regime change at the top is not enough: The time has come for systemic change.

World leaders have urged Sudan to respond to the protesters with restraint. The United States, E.U. and African Union are vaguely pressing the regime to support a transition to democracy. But if the international community only urges change without taking action, Sudan could become like Egypt, where the corrupt, military-led system remains in place despite changes in leadership. The international community must instead build leverage to persuade the military to turn over full executive power to a civilian-led transitional government.

Sudan’s generals have a financial vulnerability. Disastrous government policies have left the country in crushing deb t and in need of aid and debt relief. Sudan’s aid lifeline has consisted of emergency donationsfrom gulf countries and European assistance aimed at reducing the flow of immigrants to Europe — a task the regime assigned to some of its brutal militias. Now, all non-humanitarian aid should be suspended until civilian rule is in place and the militias are disbanded.

Additionally, the regime’s quest to obtain debt relief has been blocked for more than two decades by its placement on the U.S. State Sponsors of Terrorism list. In the past year, the United States moved forward with a process to remove Sudan from that list, which would open the door to major debt relief. The State Department announced after Bashir’s removal that it was suspending that process temporarily, and its resumption should be contingent upon the completion of a genuine democratic transition — not simply the announcement of one.

But the most potent form of leverage would be to go after the assets laundered by Bashir and his allies through the international financial system. Bashir’s military and commercial network has been siphoning off the country’s resources for decades, reportedly stuffing bank accounts, purchasing real estate and underwriting shell companies globally. As a result of the documented corruption and lack of adequate anti-money-laundering controls recently highlighted by the Sentry, regime elites are likely expanding their efforts to hide their illicitly obtained wealth outside Sudan.

Pursuing this capital flight would provide real support to Sudanese protesters. The U.S. Treasury Department and other regulators around the globe should issue public advisories to their financial and real estate sectors warning of the risk of asset flight from Sudanese “politically exposed persons” to their jurisdictions. And the United States should use Global Magnitsky Act sanctions against officials responsible for mass corruption and rights abuses.

Sudan’s courageous protesters need more than words: They need strong international action for real change to have a chance.
[/size]

Thank you, Annemarie. Saw this was in the Washington Post but am not a subscriber.. 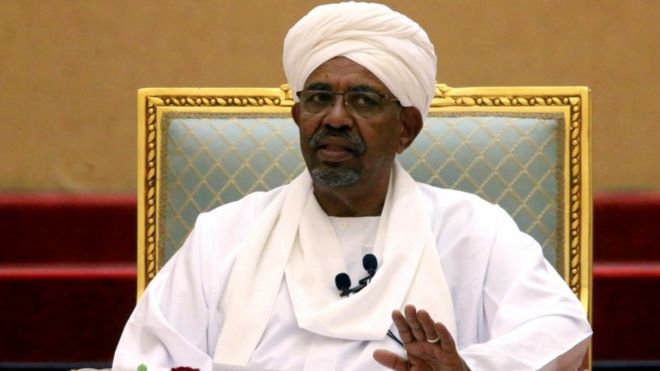 Image copyrightREUTERSImage captionOmar al-Bashir was deposed by the military after months of protests
A large hoard of cash has been found at the home of Sudan's ousted president Omar al-Bashir and he is now being investigated for money laundering, prosecutors say.
Security services found euros, dollars and Sudanese pounds totalling more than $130m (£100m).
The ex-leader was placed under house arrest after months of protests led to his removal.
Reports say Mr Bashir is now being held at the Kobar high-security prison.

A source in Sudan's judiciary told Reuters news agency that suitcases loaded with more than $351,000, €6m ($6.7m; £5.2m) and five billion Sudanese pounds ($105m) were found at Mr Bashir's home.
The source also confirmed Mr Bashir was under investigation, telling Reuters prosecutors would "question the former president in Kobar prison".
A picture carried by the Netherlands-based media outlet Radio Dabanga shows men in army uniforms standing over what appears to be several sacks full of cash. 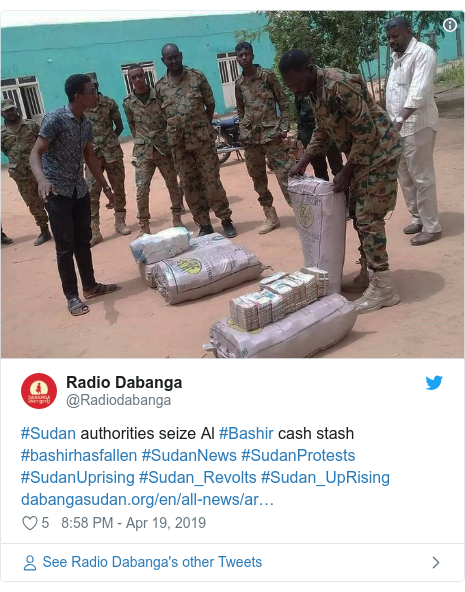 Image Copyright @Radiodabanga@RADIODABANGA
Report
The money, which Radio Dabanga says was shown to reporters, was stuffed in bags designed to contain 50kg (110lbs) of grain.
On Saturday, Sudan's attorney general said a new committee would be set up to oversee anti-corruption investigations.
But despite moves to hold Mr Bashir and others to account, Sudan's army does not appear to have the confidence of protesters demanding civilian rule, BBC Africa correspondent, Alastair Leithead, says. 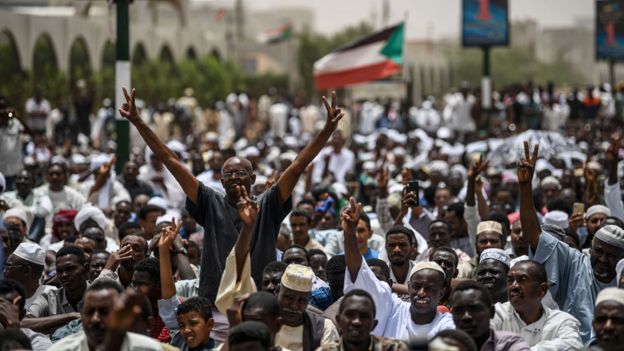 Alastair Leithead, BBC News, Khartoum
The mass sit-in continues in the centre of Khartoum, amid a lack of trust that the military council is committed to handing over power to a civilian transitional authority.
Each day concessions are announced, but there's little proof that what's been promised has been delivered.
There have been no images of the former president in prison, nor any response from the generals over a demand they give up power to a civilian administration.
The general public prosecutor's announcement that Mr Bashir is being investigated for money laundering after cash was found at his home is news the demonstrators would like to hear.

The Sudanese military toppled Mr Bashir on 11 April but demonstrators, led by The Sudanese Professionals Association, have vowed to stay on the streets until there is a move to civilian rule.
Mr Bashir, who ruled Sudan for almost 30 years, is wanted by the International Criminal Court (ICC) for alleged war crimes in the country's western Darfur region.
Sudan's military, however, says it will not extradite him and will try him in the country instead. 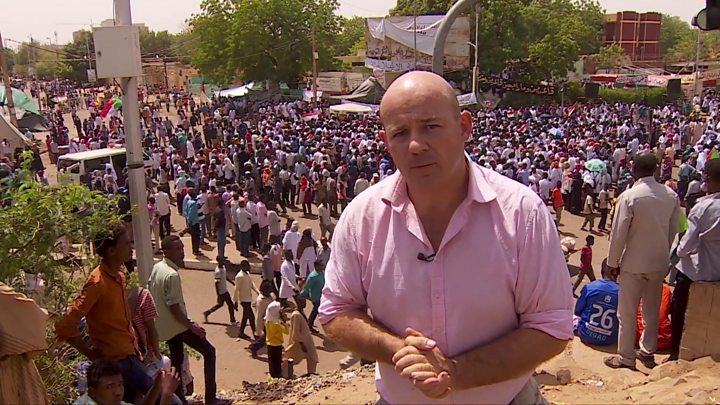 Media caption'Protesters won't move until they get real change'
Uganda would consider offering the deposed leader asylum if he applied, the country's Minister for Foreign Affairs Henry Oryem Okello told Reuters.
Until this week, Mr Bashir's whereabouts since his removal were unknown.
The coup leader at the time, Awad Ibn Auf, said Mr Bashir was being detained in a "safe place".
He himself stood down soon afterwards, with Lt Gen Abdel Fattah Abdelrahman Burhan named as head of the transitional military council.

What's the latest with the protesters?

Demonstrators remain camped out at military headquarters in the Sudanese capital, Khartoum.
Huge crowds braved scorching heat and fatigue for a 14th day on Friday, demanding that the military council hand over the reins of power to a civilian authority.
Plans to unveil a civilian body to replace the military council will be announced on Sunday, the SPA said in a statement.

Ahmed Rabi, leader of the SPA, told The Associated Press that he and others behind the protest movement met the military council on Saturday.
It is the third such meeting between them, with no sign of a breakthrough to end the deadlock.
So far, the SPA has been uncompromising in its demands, fearful of a military-led administration stuffed full of Mr Bashir's allies.
An SPA spokesman previously told the BBC that the group "completely rejected" the transitional military council leading the country, and said protesters seek the dismantling of state intelligence agencies and the "full dissolution of the deep state". 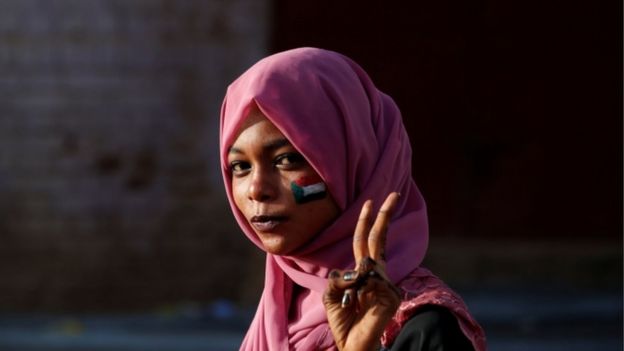 What has the military said?

Military council has announced a raft of new measures, including the end of censorship and new heads of the security forces.
The council has arrested former government members and says it will put in place whatever civilian government and whichever prime minister opposition groups agree.

But while the council promised not to remove protesters from their sit-in, it has also called on them to stop unauthorised roadblocks and "let normal life resume".
"Taking up arms will not be tolerated," military council spokesman Maj Gen Shams Ad-din Shanto said last week.