Yesterday at 16:10 by annemarie

Yesterday at 10:52 by annemarie

» 3 years after George Clooney sold his tequila brand for a billion dollars, people are calling out Kendall Jenner for launching her own tequila company

I don't think we have it yet. In case it's duplicate I merge it later. 
The B.Z. caught Hollywood star George Clooney at noon lunch at "La Banca". There was pasta, water and salad. And after a half an hour the food was already over.

Coffee gave it to the Chancellery. But going to eat George Clooney (54) prefer the Italians. And has a lot of fun ... Here Clooney laughs at Clooney! Even a Hollywood star needs a stinkin 'break ... B.Z. caught Clooney with colleagues at lunch!

Between the interviews for his film "Hail, Caesar!" He allowed himself a lunch at "La Banca" (Hotel de Rome). Clooney lunchte. Laughed. And showed: Even as Hollywood star you are amazed even when your own face is all over the papers!

Barely half an hour took his lunch break. were served pasta, water and salad. Incidentally, last fall was Clooney's pal Matt Damon (45) already in "La Banca" guest. He celebrated Thanksgiving there. Who Clooney recommended the restaurant, so you can imagine ...

After lunch Clooney chatted briefly with film-mate Josh Brolin (48), the next sitting a few tables. And met Tilda Swinton (48) in the lobby. The Hotel de Rome declined to comment to visit the superstars on B.Z. inquiry.

But it is clear: Tilda Swinton remains longer in Berlin. Saturday, 15 am, it is the Haus der Berliner Festspiele her directorial work "The Seasons in Quincy: Four Portraits of John Berger" before.

Here is another pic. thanks to frenchies 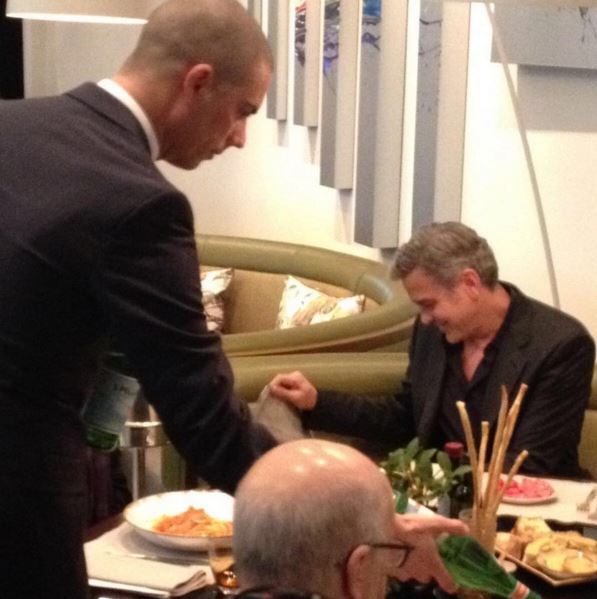 Ahhh, so good to see some restaurants still put those breadsticks upright in a glass. Haven't seen that in ages.

George looks like he's having a great time, and do I detect the glistening of the back of Stan's head there?

yes Stan was there too.