George Clooney interview with The Wrap

George Clooney interview with The Wrap

Talks about Gravity, Monuments and other things:

George Clooney on Oscar Whisper Campaigns, Writing a ‘Gravity’ Scene and Spielberg’s Reaction to the Movie


“I think right now what you have is snarky people on the Internet who just want to debunk anything,” Clooney tells TheWrap

Are you concerned that people are picking apart movies that are based on true stories, like “Captain Phillips”? Are the whisper campaigns in the Oscar race starting earlier?
It’s becoming less effective, I think. This is weird thing starting to go on where everyone is fact checking movies. If you fact check “Lawrence of Arabia,” I’m fairly sure that what T.E. Lawrence wrote wasn’t pure history. He made up battles and characters. “The Great Escape” is just an amalgamation of a bunch of different characters; there weren’t any actual Americans in real life.

I watched “Captain Philips” the other night. First, that guy (director Paul Greengrass) is a great filmmaker. The last act of that movie is as harrowing as anything you’ll see.

“Gravity” is a work of fiction. This notion that Sandy couldn’t have floated from one place to another – it’s called a movie. We’re in a really weird place where we’re focusing on shooting holes in minute details of a film that’s based on a real story. Go through the list of movies that went through best picture – “Patton,” “Gandhi” – I can find things not completely accurate. The point is it’s a film.

Do you think this is a whisper campaign?
It’s too early to think it’s a whisper campaign. I think right now what you have is snarky people on the Internet who just want to debunk anything. There’s a backlash against movies that are unbelievably well reviewed.

Are you worried about this coming up for “Monuments Men,” which is also based on a true story?
No. In doing “Monuments Men” we wanted to give some of these characters flaws, and they’re real people. We’re not going to give a drinking problem to someone who really existed, because that’s not fair. But I wanted to tell a story.

So clarify for us this scene that you apparently wrote in “Gravity”? (Spoiler Alert)
That’s not what Alfonso said. [Ed. note: The actor is referring to an interview director Alfonso Cuaron did with Vulture earlier this week] He said I wrote a piece for him. I didn’t write any scene.That scene was there from the minute I was handed the script.

The problem they were having was afterward. They were struggling with how they tell people Sandy wants to live instead and I said maybe she talks to her little girl, and says, “Mommy loves her.”

Alfonso such a sweet guy. He hands out credit to everyone all the time. I sent him the scene as I was leaving out of London. I said — “Maybe this helps. Maybe this will fix the problem.” He said they shot a version of it.

Are you surprised at how well the film is doing?
We tested this two years ago. We tested it a year ago. There was great deal of concerna at the studio at every level that it would be a very expensive art film. Alfonso just shrugged his shoulders and got to work.

I’d look at him every six months and say, “Are you OK?” It was killing him. It was a very frustrating process for him. He stuck with it. I couldn’t in a billion years dream of doing what he did.


I was talking with Spielberg the other day. He said, “I can’t speak after seeing this movie. What were you guys doing?” I said, “We didn’t know. We were floating with this weird equipment. A computer geek was behind our heads. Alfonso and Chivo (cinematographer Emmanuel Lubezki) were running things — they knew what they were doing, we’d say this was crazy.

How is “Monuments Men” going?
I’m working on the score with Alexandre Desplat. Then I’m going to London to Abbey Road to record with London 100-piece orchestra.

Were trying to do the movie in the vein of war films – but you don’t want it to sound like the “Great Escape.” Done in the ‘50s, ‘60s, they all had own sort of life. You don’t want to do a replica. You have to do new version. It’s been bit of a dance.

If we get the tone right it will be a really fun film. The guys were great. Cate Blanchett is fantastic. We don’t have to do jokes: When you have Bill Murray and Bob Balaban in the frame together, it’s just fun.

In the last scene of movie I have my father play me as an old man.


Do you have thoughts on the government shutdown?

I think at some point in the very near future, cooler heads have to prevail. There are so many good solid Republicans who don’t have any interest in this at all. I think at some point (John) Boehner is just looking for a way out to save some face. Hopefully they’ll find their way.


The last time we had government shutdown we didn’t have bloggers, Twitter for everyone to talk about it. Perhaps now you have all that, it may cause a great deal more, “OMG, the world is coming to an end,” and perhaps our record has never been to default on debt. I feel that in all probability things will get resolved. I can’t imagine anyone wanting to hurt the world economy because of a law they don’t like.

If they don’t like the law, let it go through, let it fail massively.

Are you worried that Obama will cave?
I’m not worried about that. No such thing as caving on Obamacare. I don’t think that’ll happen. Doesn’t make a lot of sense.

It’s all amplified in echo chamber of information. As this goes, cooler heads will prevail.

Worst thing that can happen on Republican side is this health care can work. Most of my friends on the right, and I have many, have no interest in the country or even health care failing. Theyd love it if worked. This is their program.

Did you ever hear from Dan Loeb after chastising him in public?
I never heard from him. I was surprised.

We live in an industry where movies are going to succeed and fail, and it can be as simple as this weekend the playoff games are two major cities, and all of a sudden no one goes to movie. You can have best reviewed film and no one sees it.

There’s no understanding to the biz, except to do the best you can. And the guys who do it for a living are pretty successful. To come form outside and have a solution is ridiculous.

So, that means he hadn't left for London as this interview was today?

Mm, not sure. It was published today, but without a doubt it could have been written a couple of days ago. Add in the time difference when flying, whilst at the same time thinking to yourself how topical the piece was, 'cos he's corrected the story about his 'writing' part in Gravity, talked politics, and referenced the Monuments Men score.........and who knows??

According to the article they spoke with him today/Wednesday.....so maybe he hasn't left LA yet....

Thanks for the article SG, much appreciate it.

Of course, we forget that a lot of interviews happen over the phone too. No telling really, and on that basis, he could be anywhere in the world!!

You are correct PA-N and it may very well have been over the phone but it is as you said a timely article and he does say "going" ....makes me surmise he hasn't left yet for London. JMO

Thanks SG for the artical.

I thought he would be in London by now for the premier. Well, let's see when he is going over there...

OMG, what an experience, sitting in Abbey Road, listening to 100 pce orchestra!!!

Wonder if they still have zebra crossing outside?

Oh, it's still there. And used for endless photo opportunities........

That´s nice interview, true with the fact checking movies - who does that anyway? And why.

Or even books (fiction I mean). Which remains me that I just got Alice Munro´s Dear life...maybe good, it got nobel prize this year...

He didn't go to the premiere in London Sandra was there.

It’s been bit of a dance.

@party animal - not! wrote:Oh, it's still there. And used for endless photo opportunities........

How could you resist; 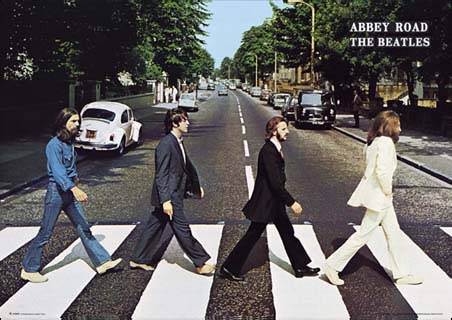