Re: The Midnight Sky

‘The Midnight Sky’ From Director George Clooney Coming to Netflix This Year
Posted on Friday, February 21st, 2020 by Chris Evangelista

That’s a wrap on The Midnight Sky, a new film from director George Clooney. Clooney’s film is headed to Netflix sometime this year, because sooner or later, everyone turns to Netflix. The film is an adaptation of a book by Lily Brooks-Dalton about a scientist trying to stop a group of astronauts from returning home. Clooney, Felicity Jones, and Kyle Chandler star.

[ltr]That's a wrap! THE MIDNIGHT SKY, from director and star George Clooney, is coming later this year.[/ltr] 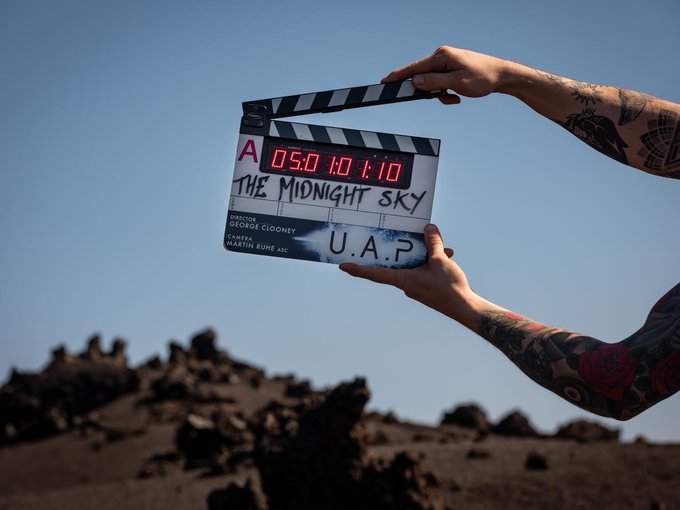 111 people are talking about this


Netflix has approximately 10 bajillion original movies on the horizon, and one of them is The Midnight Sky. George Clooney directs the film, with a script from Overlord writer Mark L. Smith. The streaming service announced today that filming had wrapped on the project, and that it’s set to arrive later this year. The film is an adaptation of Lily Brooks-Dalton’s book Good Morning, Midnight. Here’s the book’s synopsis:

Augustine, a brilliant, aging astronomer, is consumed by the stars. For years he has lived in remote outposts, studying the sky for evidence of how the universe began. At his latest posting, in a research center in the Arctic, news of a catastrophic event arrives. The scientists are forced to evacuate, but Augustine stubbornly refuses to abandon his work. Shortly after the others have gone, Augustine discovers a mysterious child, Iris, and realizes that the airwaves have gone silent. They are alone.
At the same time, Mission Specialist Sullivan is aboard the Aether on its return flight from Jupiter. The astronauts are the first human beings to delve this deep into space, and Sully has made peace with the sacrifices required of her: a daughter left behind, a marriage ended. So far the journey has been a success. But when Mission Control falls inexplicably silent, Sully and her crewmates are forced to wonder if they will ever get home.

Clooney is playing Augustine, while Felicity Jones is Sully (not to be confused with the Sully who landed a plane on the Hudson after some birds tried to fuck him up). Other cast members include Kyle Chandler, David Oyelowo, Demián Bichir, and Tiffany Boone.

This all sounds promising. I mostly like Clooney as a filmmaker – I loved Confessions of a Dangerous Mind and Good Night, and Good Luck, and thought The Ides of March was pretty good. I never bothered to see Leatherheads or Monuments Men, because both were not well received. I did see Suburbicon, however, and thought it was borderline terrible. Hopefully, The Midnight Sky will be Clooney’s bounce-back film.