[size=34]George Clooney and Brad Pitt sign on for upcoming thriller film that's ignited a bidding war between studios... and may land the actors 'paydays of $20 million or higher'[/size]

Frequent collaborators George Clooney and Brad Pitt are currently set to costar in a yet-untitled film.
The longtime friends are involved in the production of a thriller film that will be written and helmed by Spider-Man: Homecoming director Jon Watts, according to The Hollywood Reporter.
The media outlet also estimated that, based on the industry strength and connections of the performers, they are each looking at a potential payout of over $20 million dollars for their work on the project. 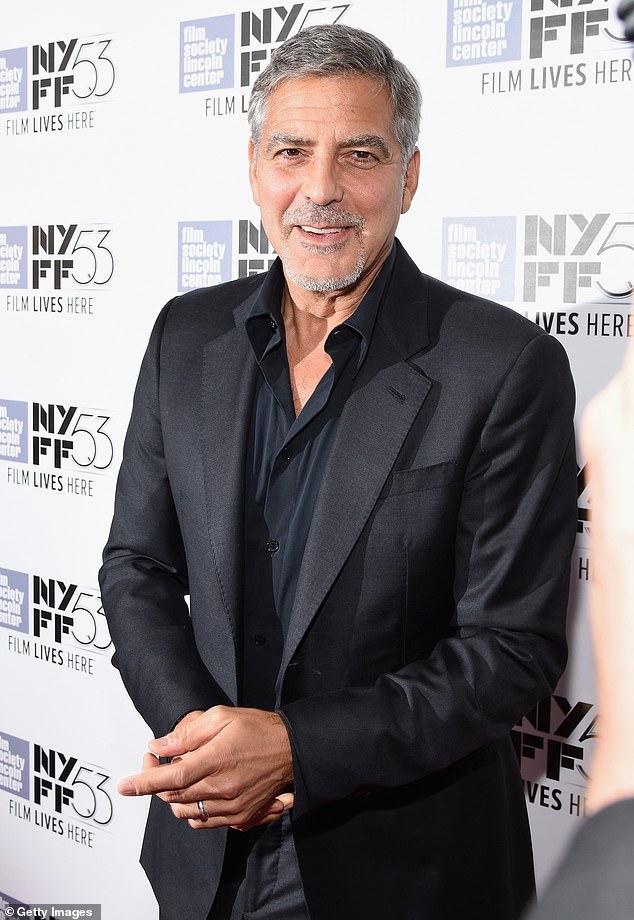 
Future project: George Clooney and Brad Pitt are set to rake in serious paydays after they started a bidding war over their next project; the former is pictured in 2015
Although details on the project are scarce, the film will tentatively be centered on two fixers who are each assigned to the same high-stakes job.

Clooney, 60, and Pitt, 57, will also serve as producers through their respective companies, Smokehouse Pictures and Plan B Entertainment.


Watts is also set to serve in the same capacity for the hotly-anticipated project.
The media outlet reported that Sony, Lionsgate, Apple and Netflix are the frontrunners to take on the film. 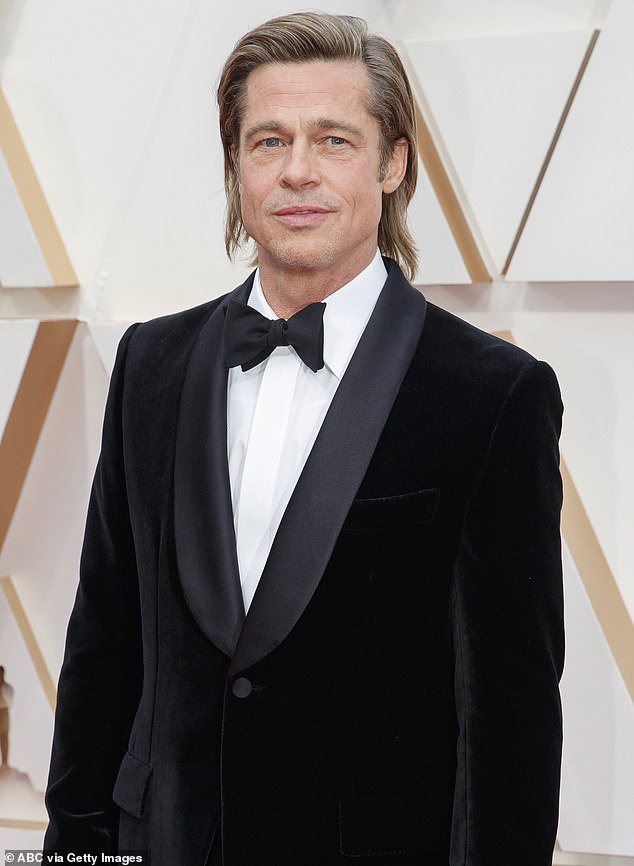 
Storyline: The upcoming feature will be centered around two fixers who are assigned to the same high-stakes job; Pitt is seen in 2020
[size=18]George Clooney reveals all about his pranks on Brad Pitt


Loa[/size]
They also noted that Amazon, Annapurna, Universal, MGM and Warner Bros. are vying for the project's rights as well.
The currently untitled feature does not have a scheduled release date as of yet.
Clooney and Pitt notably collaborated on the well-received series of Ocean's films, which served to popularize the heist genre around the world.
The Steven Soderbergh-directed features were based on the 1960 feature Ocean's 11, which starred several members of the Rat Pack, including Frank Sinatra, Dean Martin and Sammy Davis Jr. 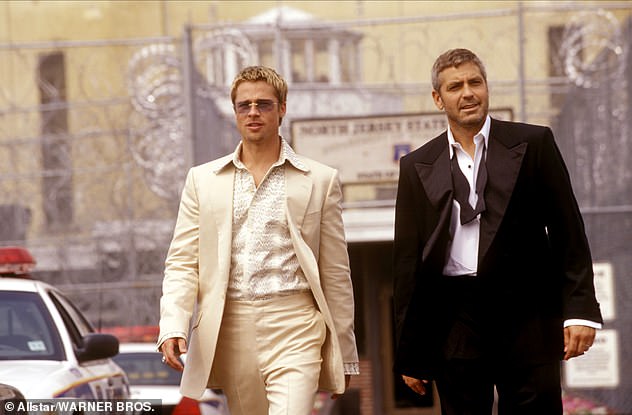 
Doing their thing: Clooney and Pitt notably both starred in the highly successful Ocean's series; the pair seen in Ocean's 11
The Up In The Air star portrayed the series' main character, Danny Ocean, while the Inglourious Basterds lead played his right-hand man, Rusty Ryan, in the franchise's first three films.
The highly successful films all featured ensemble casts that included the likes of  Andy Garcia, Julia Roberts, Matt Damon and Bernie Mac.
Neither of the pair made an appearance in the all-female spinoff flick Ocean's Eight, which was released in 2018.
Clooney and Pitt both appeared in the 2002 spy feature Confessions of a Dangerous Mind, although the latter was only on screen for a brief period of time. 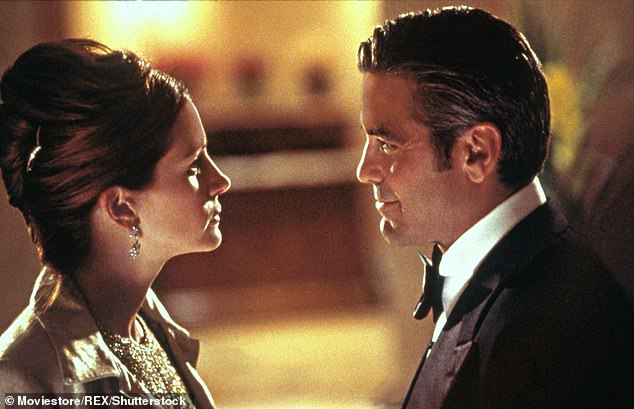 
L[/size]
They also costarred in the 2008 crime comedy film Burn After Reading, which was directed by the Coen Brothers.
The movie was well-received upon its release, and the Once Upon A Time in Hollywood actor was nominated for the BAFTA Award for Best Actor in a Supporting Role for his work on the motion picture.
During an interview with Howard Stern, Clooney spoke about a good-natured prank war that had been running between him and Pitt for several years. 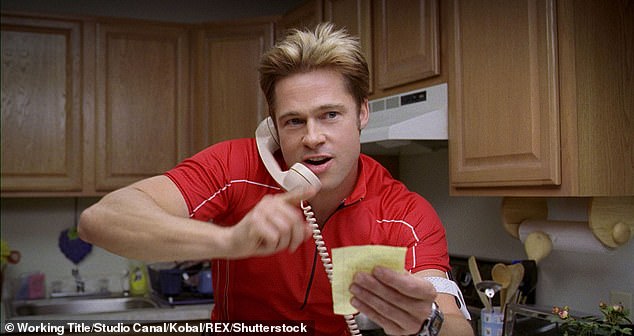 
Back at it: Clooney and Pitt also appeared in the 2008 crime comedy feature Burn After Reading; Pitt pictured
The performer pointed out that, during the filming of Ocean's Twelve, his costar had posters put up around the production area in Como that told onlookers to treat the film's star as if he was constantly in character.
He then noted that Jimmy Kimmel later gifted him stationery that featured Pitt's information on it, and in retaliation for his treatment in Italy, he began sending fake letters to other performers.
Clooney then noted that, after receiving dozens of CDs featuring various accents, he re-sent them to Meryl Streep with his friend's name attached to the package.
The performer also added a letter, supposedly from Pitt, where he noted that the recordings might help her with her impression of Margaret Thatcher for her role in The Iron Lady. 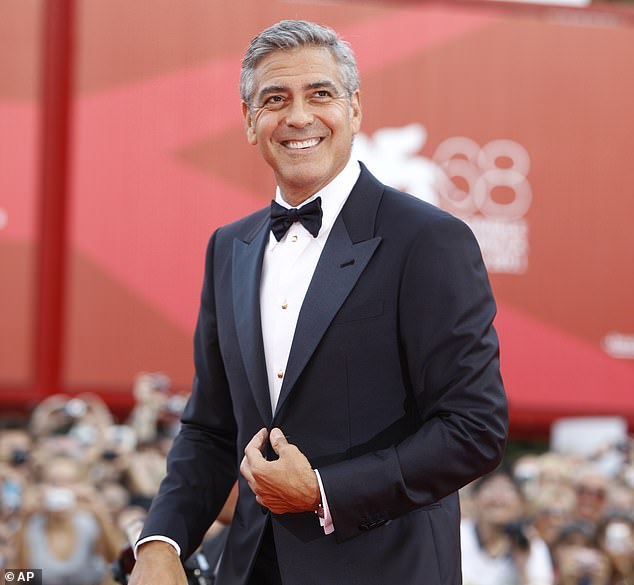 
Messing around: Clooney and Pitt have been involved in a good-natured prank war for several years; the former is pictured in 2011
Read more: