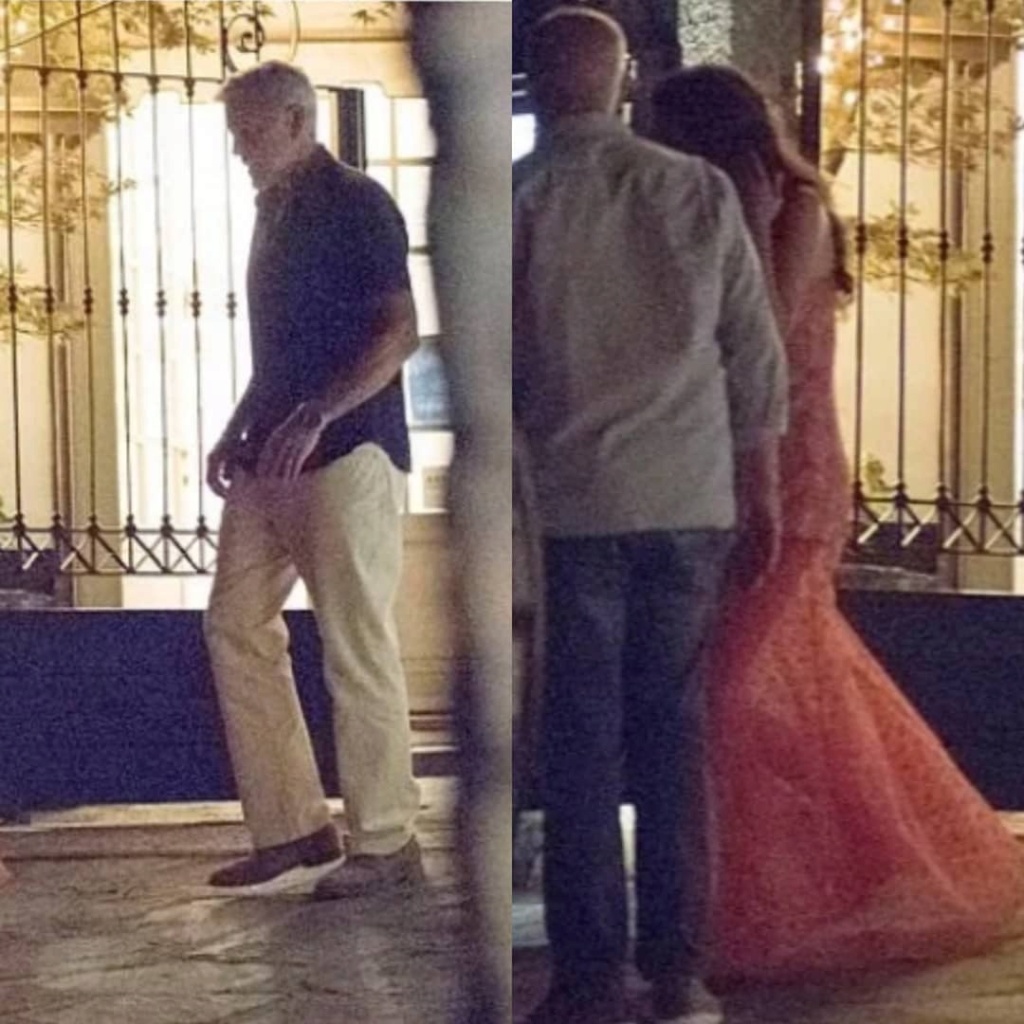 Very disappointing.   George is casual and she's in an evening gown-  sad attempt to get attention.  Look at me! Look at me!  Not her first effort in this department, but obviously it works- she does get attention, lots of press telling us she's sooooooooooo elegant, etc.   Sad. Sad.   Just my humble opinion

It's not so bad really,Pigpen. This is a place just up the road in Laglio, which George is supporting for all the reasons that we know.

Yes, it's not an evening gown it's like a jumpsuit. It's not too formal at all.

You wouldn’t say that if you ever met or got to know a Lebanese woman but I can tell from my experience that dressing up in a very sophisticated way is so normal there. Lebanese women take good care of how they look so the way Amal is dressed is totally fine from a Lebanese perspective maybe George is a bit underdressed. It’s part of their culture. It may sound weird but again who wouldn’t appreciate the effort his/her partner puts into looking good & dressing well

In one of her interviews Baria (amal’s mother) mentioned that she’s happy her daughter is admired for having a good sense of fashion and also very proud of all Lebanese women for always looking fashionable.

Overdressed is Oppsite of class, ALWAYS always less is more is the better!
But For fame hungrey who Master in entertainment that is the logical thing.
I do pity lebanese women seeing all the gulf women buy these fancy dresses, jwellery,and... and every thing that they can not afford so they have to marry rich men to break that complex. And never get out of it even For a  dinner.

It looks like some sort of see-through thing over rompers - the kind of thing you'd see at any up-scale resort. I just wonder how she manages to get around without falling. She's always wearing wedges or heels and skirts that hit the ground. Every time she gets on and off a boat I marvel that she doesn't twist an ankle or fall in the drink!

She has had a lot of practice after nearly 7 years. If she fell in george would go with her he is always holding her hand getting on and off boats lol.

It would be a lot easier all around if she just wore flats!

We’ve had this same conversation about nearly every woman George went on public dates with, and I think by now it’s clear that George is the one who is perpetually underdressed on the outings. Maybe it’s a lack of vanity, maybe he just prefers to be comfortable, maybe he figures no one’s going to enforce a dress code for GEORGE CLOONEY, but this is an ongoing issue and it just doesn’t seem possible that *every* woman was deliberately overdressing for attention.

True Missa, George will dress up when it is necessary and he feels liket it . I think it just depends on where they are going.
Amal enjoys looking nice and I'm sure George doesn't mind his wife looking gorgeous.

This one?  Looks like a summer dress to me:

She's wearing a summer dress, that could easily work for either day or evening, and folks, George isn't under-dressed at all!  Remember how he lives in jeans and those cruddy boots?  That's George casual.  Here, he's in pressed trousers and actual shoes.  He's going for the relaxed smart look.  They're pretty much matching in style.

That's it - it's shorts underneath the skirt and Dolce and Gabbana, I think.

You go girl! Everyone should have a dream. I hope yours comes true. (I wouldn't even dare - I'm depressed enough already!)

Hate to brag, but I can fit into something I wore 10 years ago.  Albeit it's a scarf, but it still fits.