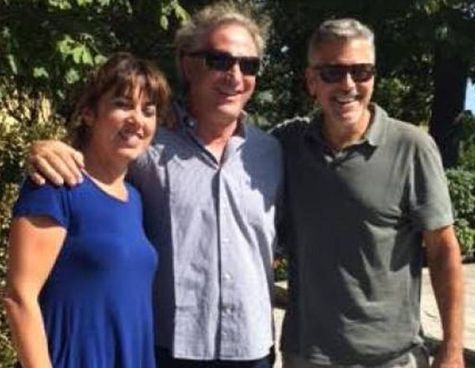 Thanks for the find, Benex!

It appears George was also at Barack Obama's birthday party this week.

George Clooney in Cortona, the Tuscan summer is more and more VIPs
Famous people in Valdichiana: the great actor is back in the Relais dei Baracchi, Morandi guest of Jovanotti. Costacurta and Martina Colombari in Castiglion Fiorentino

George Clooney with Riccardo and Silvia Baracchi
George Clooney with Riccardo and Silvia Baracchi
Cortona (Arezzo), 10 August 2021 - The network of VIPs who have chosen to make a stop in Cortona in this hot summer of restart is growing. After the double walk of Sir Antony Hokpins and that of Robert Downey Jr, here is George Clooney and his wife Amal Alamuddin, who have decided to spend a romantic evening away from the paparazzi by returning to a place dear to them: the Relais il Falconiere. It is not the first time that the Hollywood star and his inseparable wife, a Lebanese lawyer, have made a stop in the city. The last opportunity dates back to 2015 during a holiday in Tuscany. "It was a very pleasant surprise to have them back as our customers", said Riccardo and Silvia Baracchi of the Falconiere. They allowed themselves a dinner without children and then left without sleeping in the relais. "They were extremely affectionate. They hugged us remembering their last visit", Riccardo Baracchi continues. "George remembered our hospitality well. I gave him my book on the history of the falconer, which also talks about him, together with a special 2017 Sangiovese vintage".

But this time no souvenir photos, so as not to disturb the evening. Menu full of delicacies that Silvia prepares in her starred kitchen: aubergine parmigiana decomposed for an appetizer; porcini tortelli with saffron puree of new potatoes for Amal; spaghetti with vermouth, green olives and chopped red prawns as well as tuna in a crusted tomato soup for George. Then a dessert with summer flavors, all washed down with Sangiovese from the Baracchi winery, the couple's favorite. And while Clooney and his wife were relaxing at the relais, in the heart of the historic center, another VIP, this time from our own, was taking a leisurely stroll. Gianni Morandi and his wife Anna gave themselves a Cortona weekend as guests of Lorenzo Jovanotti and his family. Their arrival was immortalized both by the owners of the Osteria del Teatro restaurant (where Jovanotti is at home) who had them as customers, and by the singer himself who posted a smiling photo on Instagram in the company of the guests, of his daughter Teresa and of his wife Francesca. The friendship between the two was further strengthened thanks to "L’Allegria" that Jova wrote for Morandi and which tops the charts.

But it is not only Cortona that appeals to VIPs. Castiglion Fiorentino was the destination of another much loved couple of the star system. They are Alessandro Billy Costacurta and Martina Colombari who took a walk through the streets of the center with their mobile phone always ready to "crystallize" the suggestion of unique views of the medieval city. It is not a casual visit, it is a promise made by the Rossoneri icon of football, today a TV commentator, in April 2019 at an event wanted by the Municipality for sport and to support Mercy. Costacurta on the stage of the theater revealed that he was fascinated by the beauty of the city, promising to return with his wife. Promise kept: Billy and Martina allowed themselves a short stay admiring the masterpieces of art and appreciating the landscape, as shown by the Instagram photo of the TV commentator overlooking the Cassero "belvedere". A telephone greeting to Mayor Agnelli then the tour in Tuscany with his wife continues in Val d’Orcia.

I read in a German news magazine thst Obama cancelled his big birthday party due to the rising numbers of Covid infections in the States. He had a small group of guests, just family members, instead.
Don't know if that's true, but I guess we would have seen at least some of the famous guests flying in Martha's Vineyard. Or were there any pics?

I haven't seen any pictures from the party. Honestly, I haven't been following too closely but from the headlines I saw it seems they cut the guest list down substantially. I did see - I think in the NY Post - that George was there, but no pictures.

There have been long lens pix, mostly of security men - and loads of folks were cut (including      Stephen Colbert who talked about it on his show!).

George was a no-show (according to some - but hosted a similar one in 2012) but it would        have been a very long trip - especially if he was in Cortona in Tuscany). I would imagine they
zoomed!

Just to set things straight, the general impression here is that Obama cut the guest list because of all the negative press he was getting - not because he was concerned about the virus. The huge guest list - whether vaccinated or not - probably mostly unmasked because it was supposed to be an outdoor event - made him look like a hypocrite when most of us are still struggling with how to get back to normal.

I haven't read anything negative about his birthday bash but didn't follow it either. But I can imagine that there was quite a lot of negative press - and to be honest, I think fair comments would be reasonable. We all had to either shorten or cancel parties and are still not able to travel like before Covid, sometimes families and friends haven't been able to see each other for 18 months now. So inviting hundreds of friends from all over the world just wouldn't seem to be fair IMO.

It's also not a good idea when the government is trying to convince people to take precautions and vaccinate because the virus is so serious. Then they see him having this big bash and they think it must not be that big a deal, so they don't do what they should.

The party did go on as scheduled.  Plenty of front page Boston papers condemning the party, before  during and after the date..  George Oprah Steve Spielberg on the guest list.  No confirmation if they were there.  Tom Hanks, Steven Cobert were there.  So far no update if it was/will be a super spreader, but if nothing else, I feel bad for the people who live there- can't even comprehend the disruption this caused.

I would hope most people would have common sense and not be lead by what someone else does. I am glad lthey had the party you turn 60 once and it should be memorable. I am sure they followed the guidelines. Some will be upset no matter what if there were 10 people they would be mad. That party also employed people which is a good thing .