Interview and video with George in Laglio about the floods

Interview and video with George in Laglio about the floods

It sounds like they were very lucky. I'm not surprised to see George out and about checking on the damage in the town. I bet he'll get involved with the clean-up efforts, too.

George Clooney's Italian villa was hit by flooding around Lake Como as the road outside turned to a river and debris blocked his front door.
The 60-year-old Hollywood A-lister was staying at Villa Oleandra, in the hard-hit town of Laglio, with wife Amal and their two children - twins Ella and Alexander, aged four - when flooding caused by three days of torrential downpours hit on Tuesday.
The flood triggered landslides that damaged homes and led to 60 people being rescued - including 30 from Laglio - with Clooney's home also affected.

A large expanse of mud, wood, and debris washed up against the villa and reached a first-flood balcony with the front door also blocked, Italian media reported. 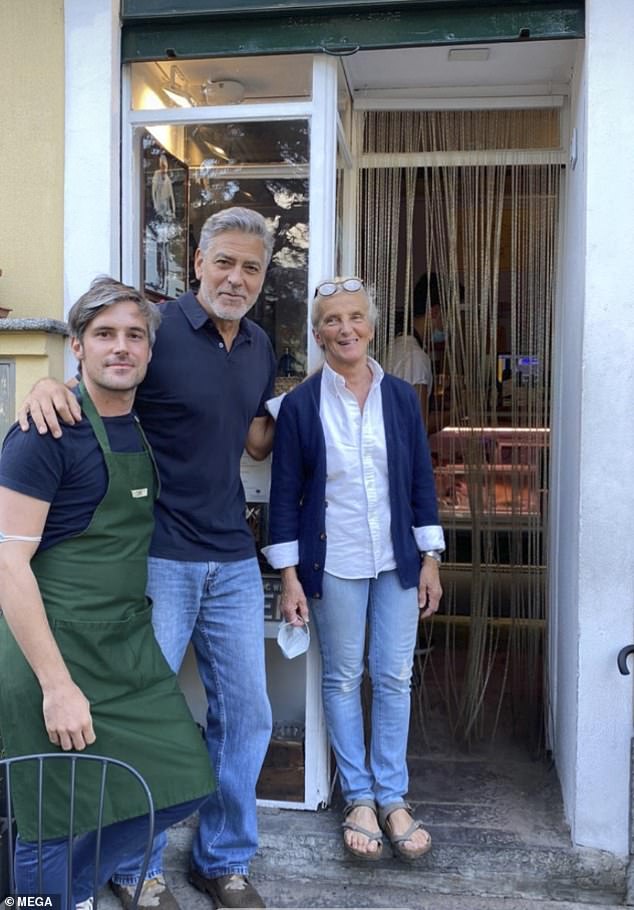 
George Clooney's Italian villa was hit by flooding around Lake Como that led to 60 people being rescued, with debris blocking his front door and reaching a first-floor balcony (pictured, Clooney in the flood-hit town of Laglio with locals) 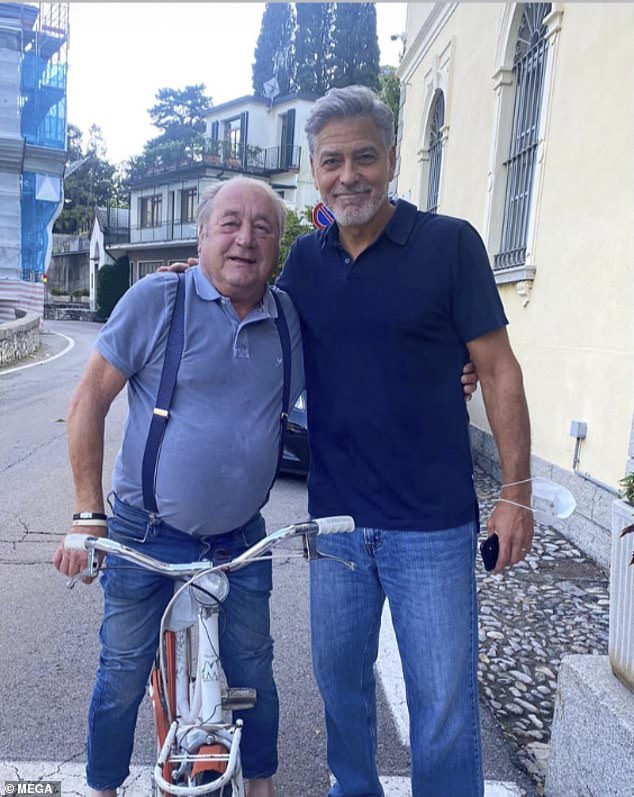 
Clooney was inside the property with wife Amal and four-year-old twins Alexander and Ella when flooding hit, triggered by three days of torrential rains 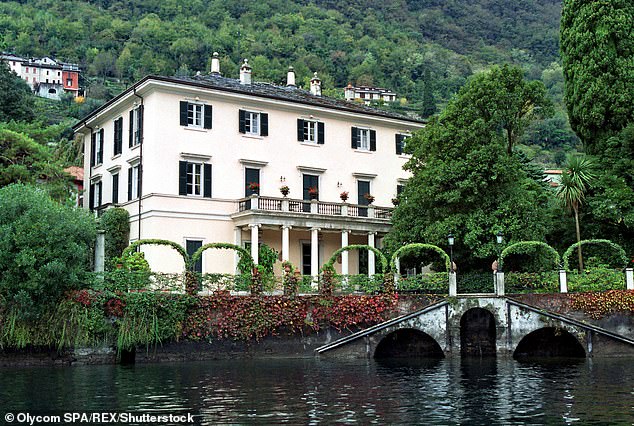 
Clooney and Amal own this property - Villa Oleandra - which sits on the shores of Lake Como in the town of Laglio, which was among the hardest-hit by floods

The 60-year-old actor was seen helping locals clean up the damage in Laglio on Wednesday, and met with mayor Roberto Pozzi at some of the worst-hit spots.
He also shook hands with local business owners, showing support for their plight.
'It's much worse than I thought', he told TV station TG1 in English, apologising for his lack of Italian.
'In Cernobbio the situation is serious. I spoke with the mayor, there will be a lot of work, it will take millions of dollars, but this city is strong.
'It will react and return better than before. This is a very resilient city.'
Flooding around Lake Como is just the latest in a series of extreme weather events to hit Europe, amid increasingly dire warnings from scientists about the impact of climate change.
Dozens of people were killed and hundreds more displaced from their homes earlier this month when extreme rains hit Germany and Belgium, also causing damage in the Netherlands and Switzerland.
Meanwhile forest fires are raging in Turkey and Greece, where temperatures are expected to top 40C in the coming days.
The Lake Como flooding saw firefighters rescue dozens of people from shattered homes, while hundreds more were evacuated as a precaution.
Among those rescued were an elderly woman who was blocked in her home, a person with a disability and a caregiver isolated by a landslide.
Fortunately, no deaths or injuries were reported. 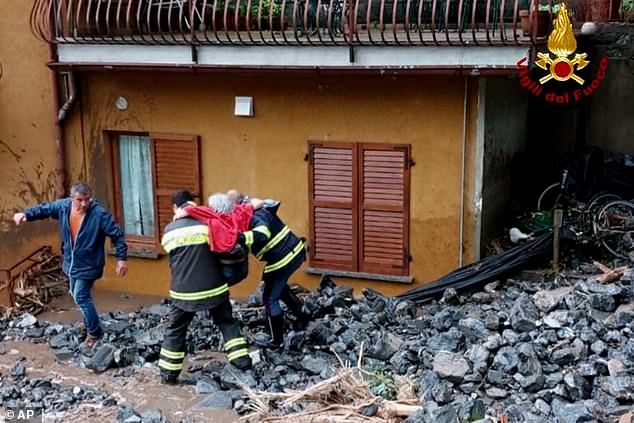 
60 people had to be rescued by firefighters in the flooding, including an elderly woman who became trapped in her home (pictured) 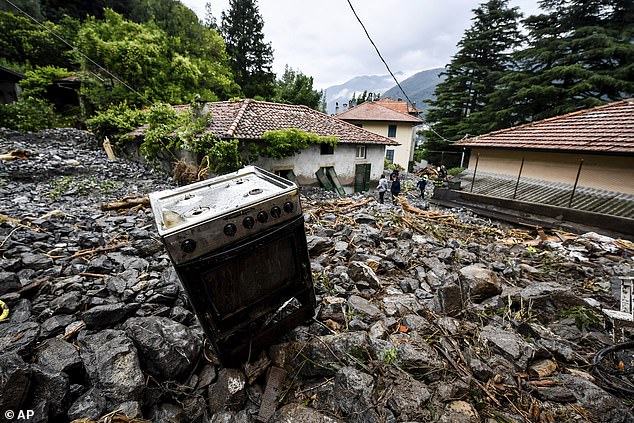 
The flooding triggered landslides which damaged homes and washed tons of debris into the streets, including this cooker which was pictured in the town of Laglio 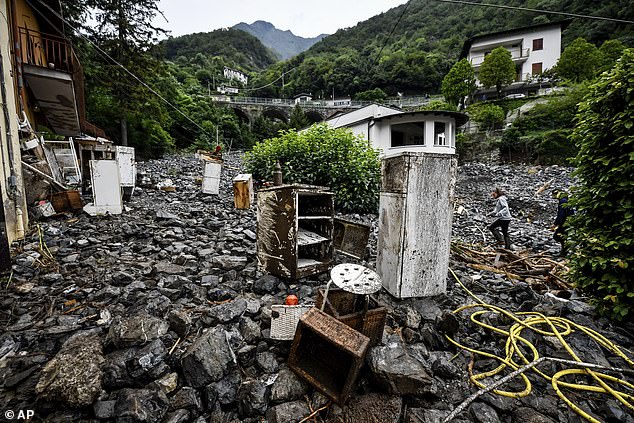 
Home appliances and furniture washed out of flood-hit homes sits in the streets of Laglio, which is where Clooney's villa is located 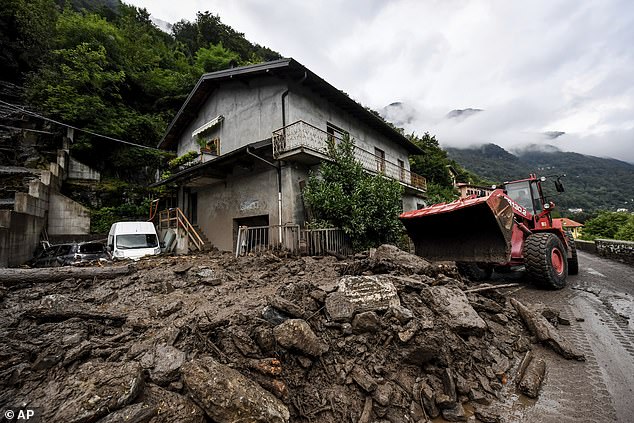 
A digger removes mud and rubble that was washed up against the side of a house in Laglio, on the shores of Lake Como, due to flooding
[size=18]George Clooney and Julianna Margulies reunite for ER reunion


Lo[/size]
In Brienno, on the lake's western shore and the hardest hit town, 50 residents were blocked in their home when a landslide caused a gas leak.
And further south in Cernobbio, firefighters evacuated a condominium threatened with flooding.
'We are facing in Italy the consequences of climate change, with a trend toward tropicalization and the multiplication of extreme events,' Coldiretti said, citing more frequent, sudden and violent storms, short and intense rainfalls and rapids changes from sunny skies to storms.
Coldiretti estimates 14 billion euros ($16.5 billion) of damage over the last decade to agriculture production, buildings and infrastructure because of climate change-provoked events like flooding and landslides.
The storms devastating Lake Como come a day after hailstones the size of tennis balls damaged nearly 100 cars and stalled traffic on a highway near Bologna, in northern Italy.
Video showed cars with windshields shattered by the hailstones pulled over on the side of a highway as stunned drivers and passengers surveyed the damage.
While hailstorms are a common summer feature in Italy's Po River Valley, meteorologist Luca Lombroso told the Bologna daily, il Resto di Carlino, that the strength and frequency of hailstorms this year has made the phenomenon 'unusual.'
Coldiretti said its analysis shows that hailstorms are occurring at the rate of 11 a day this summer, with 386 recorded so far this year.
That compares with a few dozen a year up to six years ago, a rate that grew to 92 in 2018 and 198 in 2019.
'The dimension of the hailstones also has changed, growing considerably in the last years with real ice blocks falling from the sky - even bigger than tennis balls,' Coldiretti said.
Hailstorms can wipe out entire fields or orchards of vegetable and fruit. Coldiretti attributes a 40% drop in peach and apricot harvests and a 50% drop in nectarines to 'this crazy climate.' 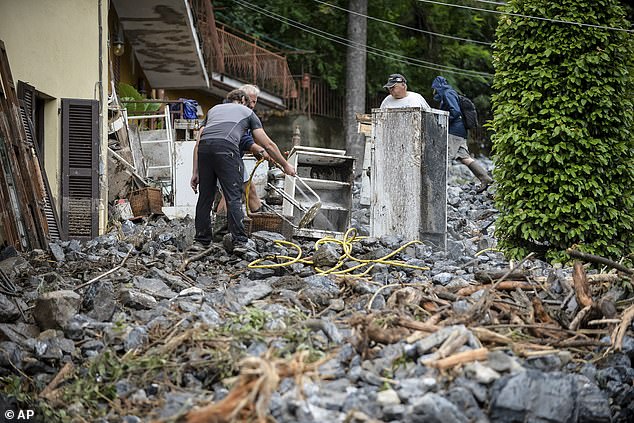 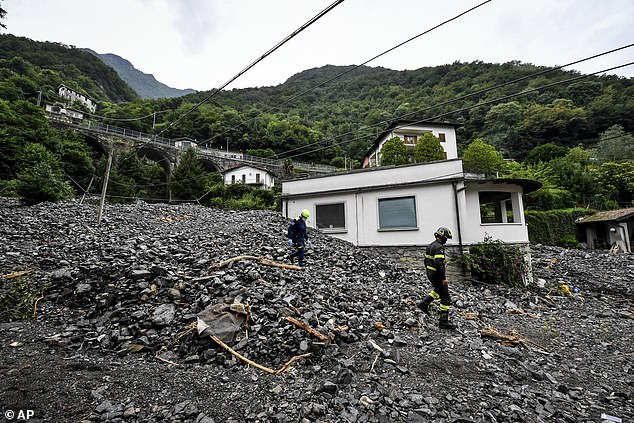 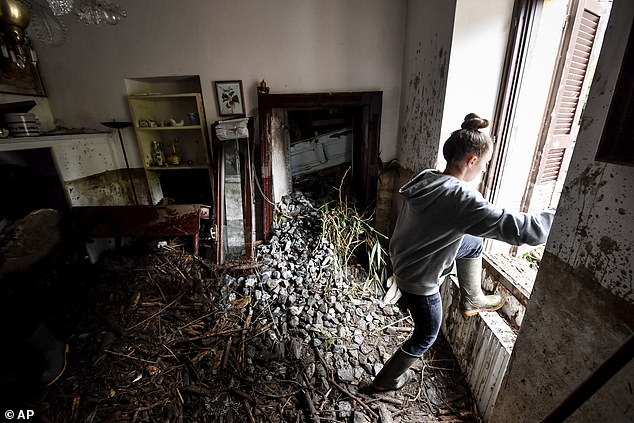 
A woman clears her flooded home following floods in Laglio 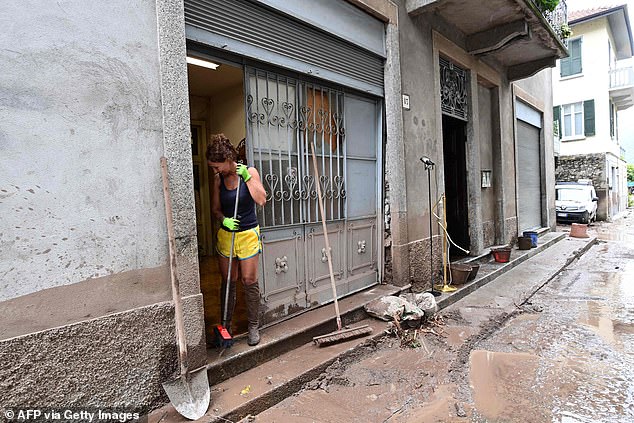 
Aftermath: A woman was seen cleaning the area in the wake of a landslide
Read more:

Well, that's a bit of a change from what we saw yesterday. It sounds like they came closer to real trouble than he let on in his interview. I'm glad they're all ok. It could have been much worse.

Seems like wherever George buys property Mother Nature acts up: flooding in Sonning, landslides in Laglio, smoke and fire in LA. I hope the property in France is luckier.

Yep, Mother Nature seems to be affecting us all, Lizzy - and as the caretakers of the planet we're not doing a great job!

It's really hard to put the distances and places into context. It sounds as if the higher Regina road is open but the lake road is closed because of the debris that has landed at the bottom, but I'm not sure.

Interesting piece from a CBS reporter on the situation in general on the lake:

Poor George - seriously unlucky with flooding in his homes this year!