Ok, it's a rehash article, but still sweet reading. 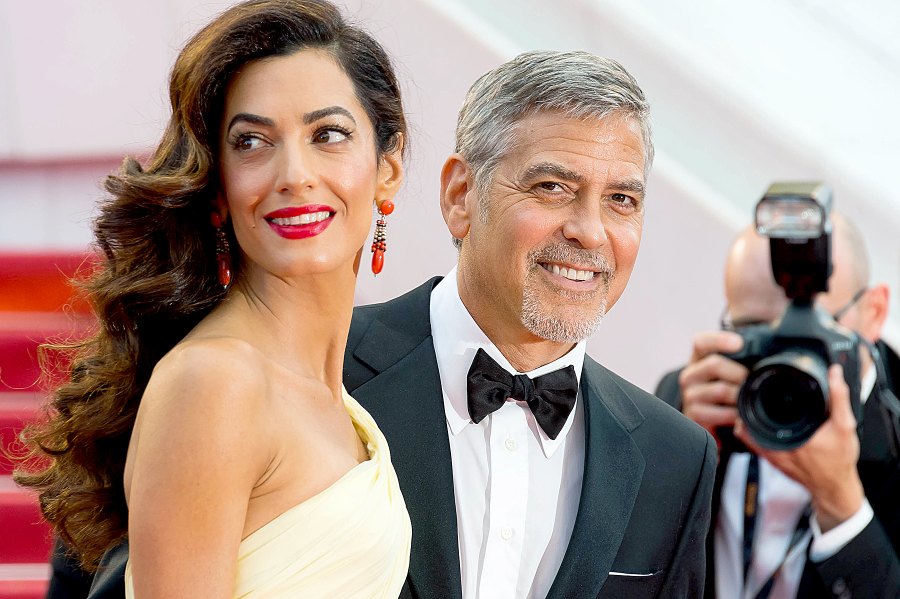 
Proud parents! George and Amal Clooney, who welcomed twins Alexander and Ella in June 2017, have candidly opened up about their kids on multiple occasions.

From jokes about barf to their twins’ first words, scroll through for the couple’s best quotes about parenthood.

Best of the Best

George loves “everything” about fatherhood, he said during a March 2021 Today show appearance. “[It’s given me] a sense of belonging and a sense of home and unconditional love — all the things that you were hoping you could get from a really good career and a dog. You realize that this is a lot more than that,” he explained, adding that he's glad he “found the right person to have them with." 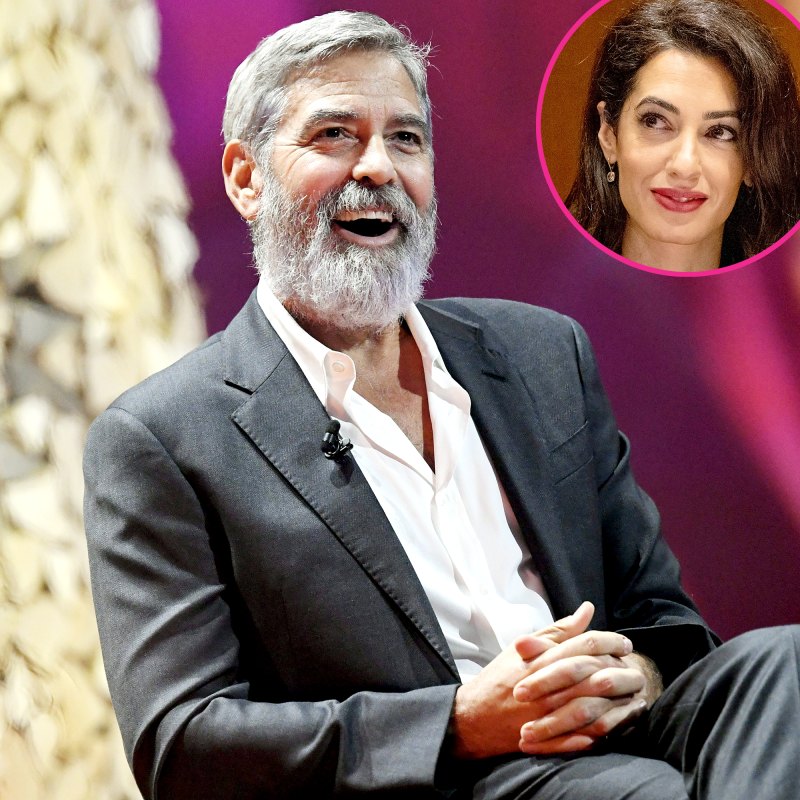 George said in March 2021 that Amal disciplines him instead of their children because he teaches Alexander and Ella “terrible things.” The actor explained in a March 2021 Today With Hoda & Jenna appearance: "I really do enjoy teaching my children to do things that shock their mother. … She's like, 'Really? That's what they learned today?' And I'm like, 'Well, you know.’ The worst thing you can do is leave me alone with them for a long period of time." 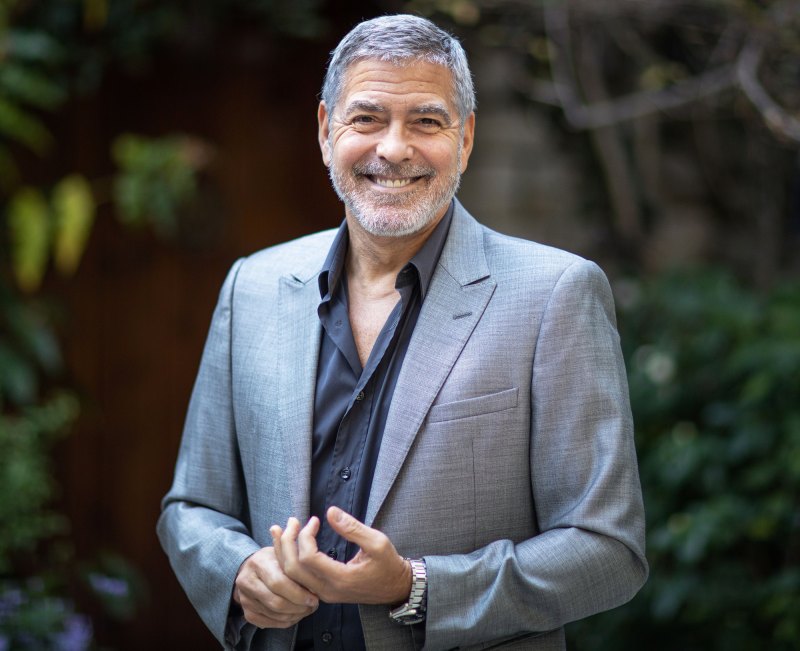 "I'll tell you what I've taken on as a hobby: two or three loads of laundry a day, dishes all f--king day because these kids are all slobs,” George told W magazine in February 2021 amid the coronavirus pandemic. "Apparently, you have to wash your children every once in a while." 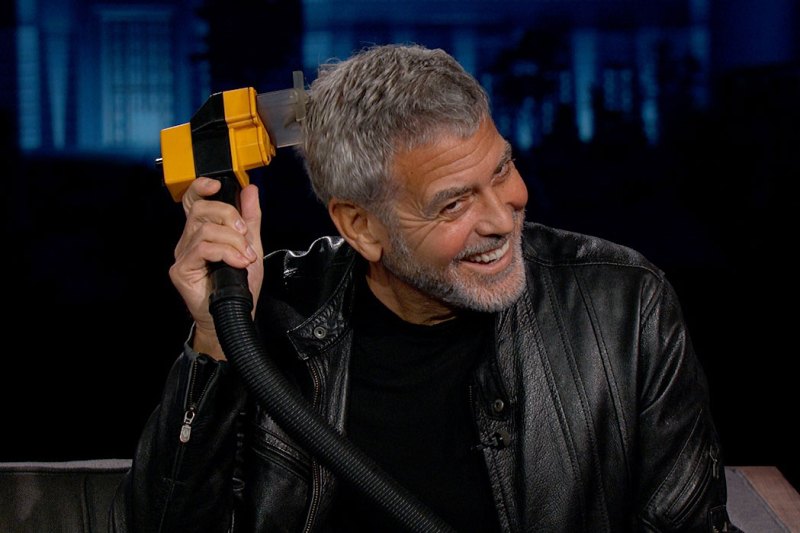 "I haven’t cut my daughter’s hair,” George told W magazine in February 2021. "I’d get in trouble if I did. If I screw up my son’s hair, he’ll grow out of it. But my wife would kill me if I touched my daughter’s hair."

George told Stephen Colbert in December 2020 that he gets his twins to stay “well-behaved” by pretending to be Santa Claus. "When they’re asleep in the morning — they sleep in the same bedroom — they start to make noises, and you can hear the two of them getting at each other," the actor explained. "I stand outside the door and I go, ‘Oh hi Santa!’ And then you hear Santa is there and he’s like, ‘Ho ho ho!’ And I say, ‘What are you doing here, Santa?’ And he says, ‘Oh, I’m just making sure that the kids are being good kids.’ And you can hear them going, ‘We are Santa! We are!’"

George joked in December 2020 that he “drinks, mostly” to "get through" quarantine with his two kids. 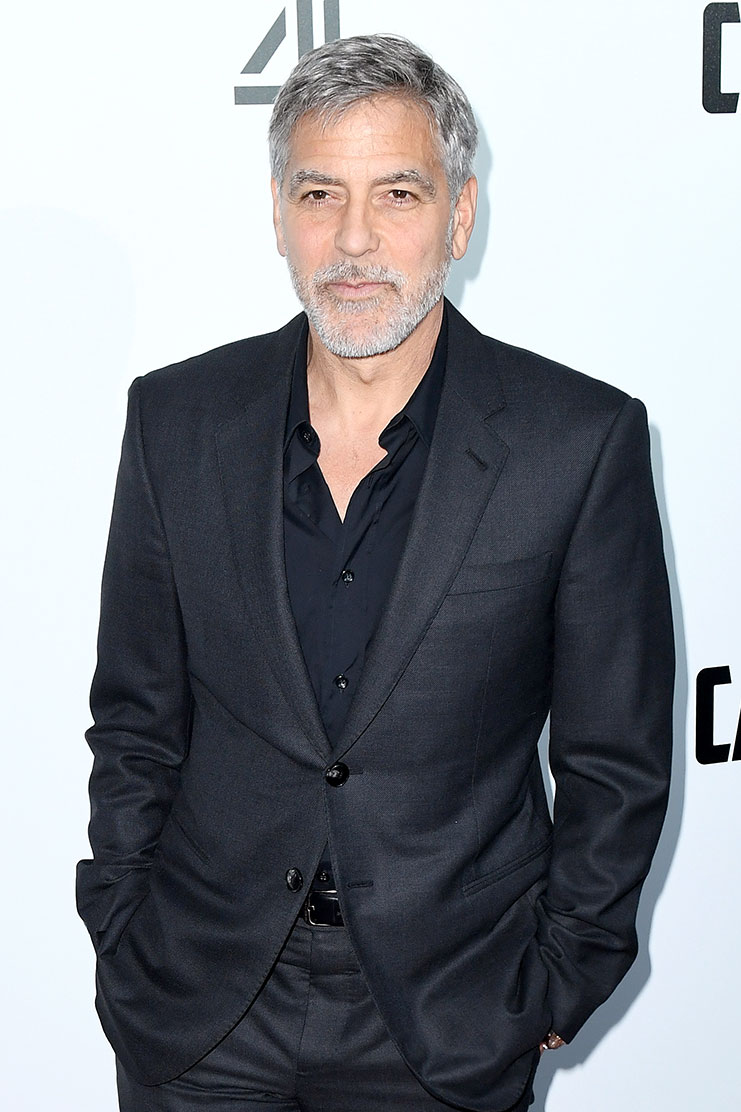 George told The Guardian in December 2020 that his family hadn’t left their property since March amid the COVID pandemic, explaining, “My son has asthma. They say it’s not so bad on young people. But do we know that? We don’t know anything about the long term of this yet.” 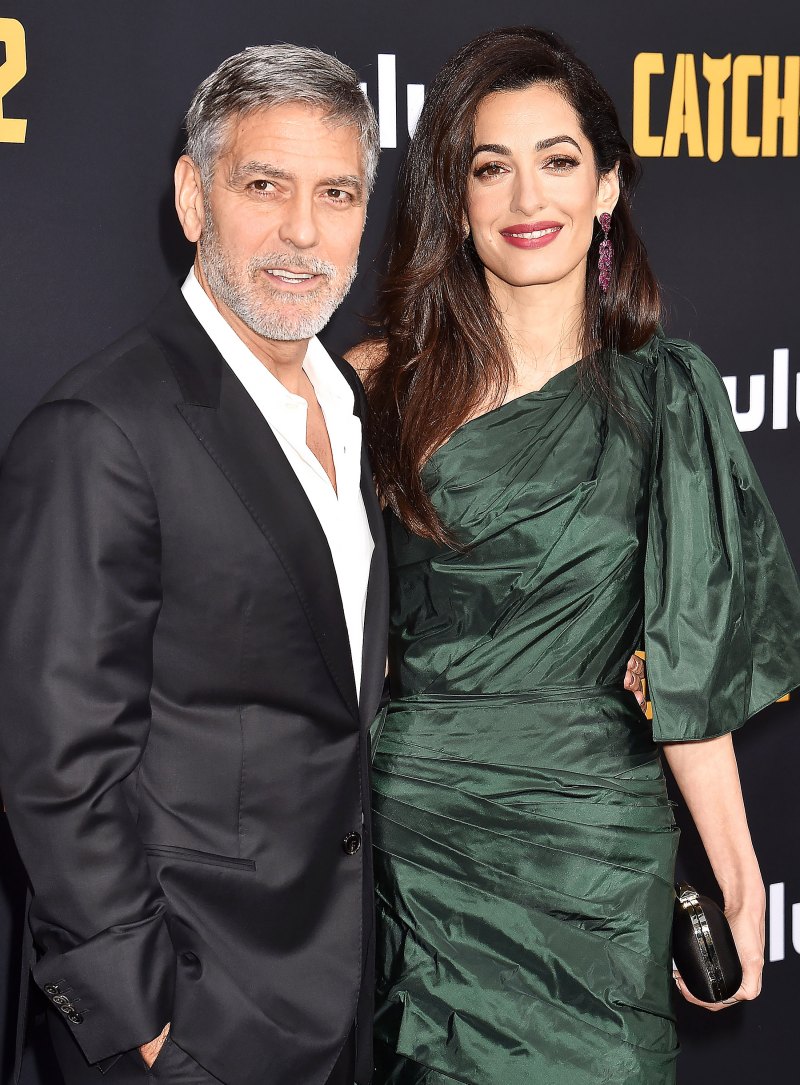 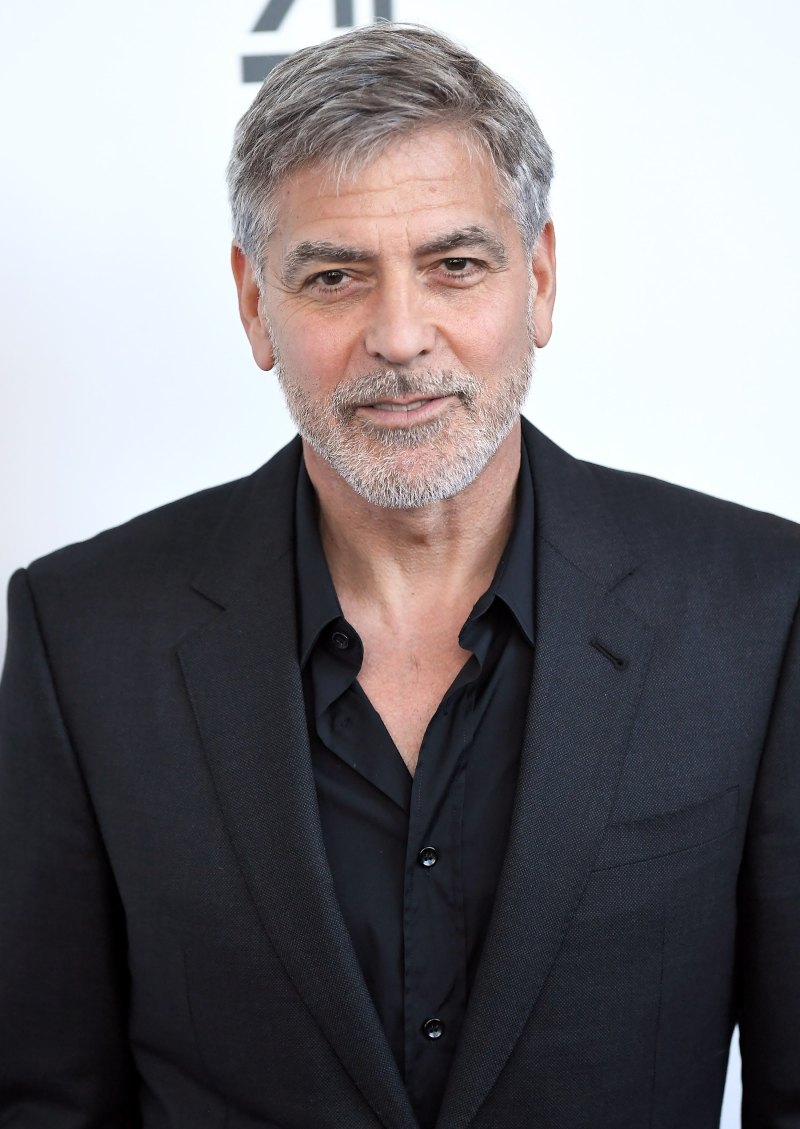 "There are times where [the kids] say, 'OK, now we are going to hop like a frog all the way to bed,' and I am like, 'I will hop a few. I don't know if I can go all of the way to the bedroom,’” Clooney told Entertainment Tonight in December 2020 ahead of his 60th birthday. 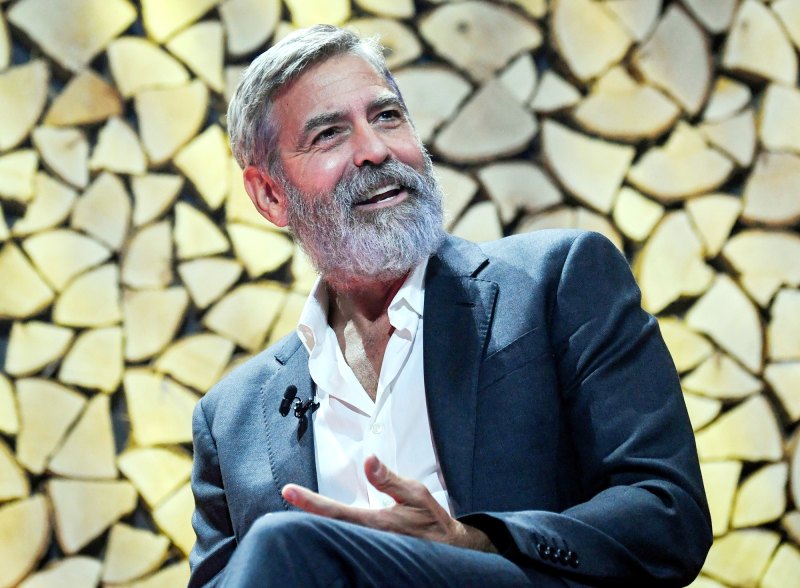 George is “so glad” his two “knucklehead” kids have each other, although he was nervous ahead of the twins’ birth, he said during a November 2020 appearance on CBS Sunday Morning. "I was up for one, you know? Because I'm old. All of a sudden it's, like, two? You know, it's hard to get me to not talk. And I just stood [at Amal's ultrasound appointment] for, like, 10 minutes, just staring at this piece of paper going, 'Two,' silently." 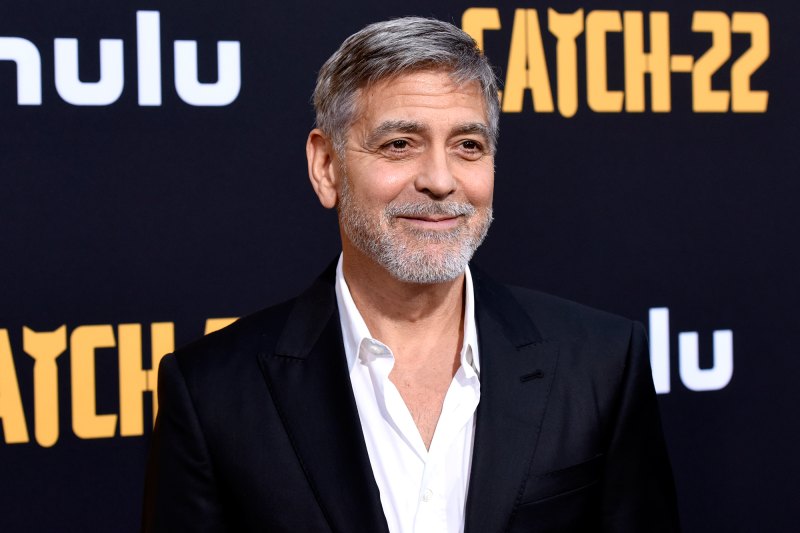 “My daughter is sick, as happens apparently with children, I didn't know this," Clooney joked on Jimmy Kimmel Live! in June 2019. "So at 2:30, she woke us up on my birthday, and then at 4:30 in the morning. So then we put her in the bed, which you have to do because she's crying and she's unhappy. Then she takes over the bed. And then I realized that's no good, so I covered all around the bed with pillows like a bouncy castle in case she falls off, and I went and slept in her nursery." 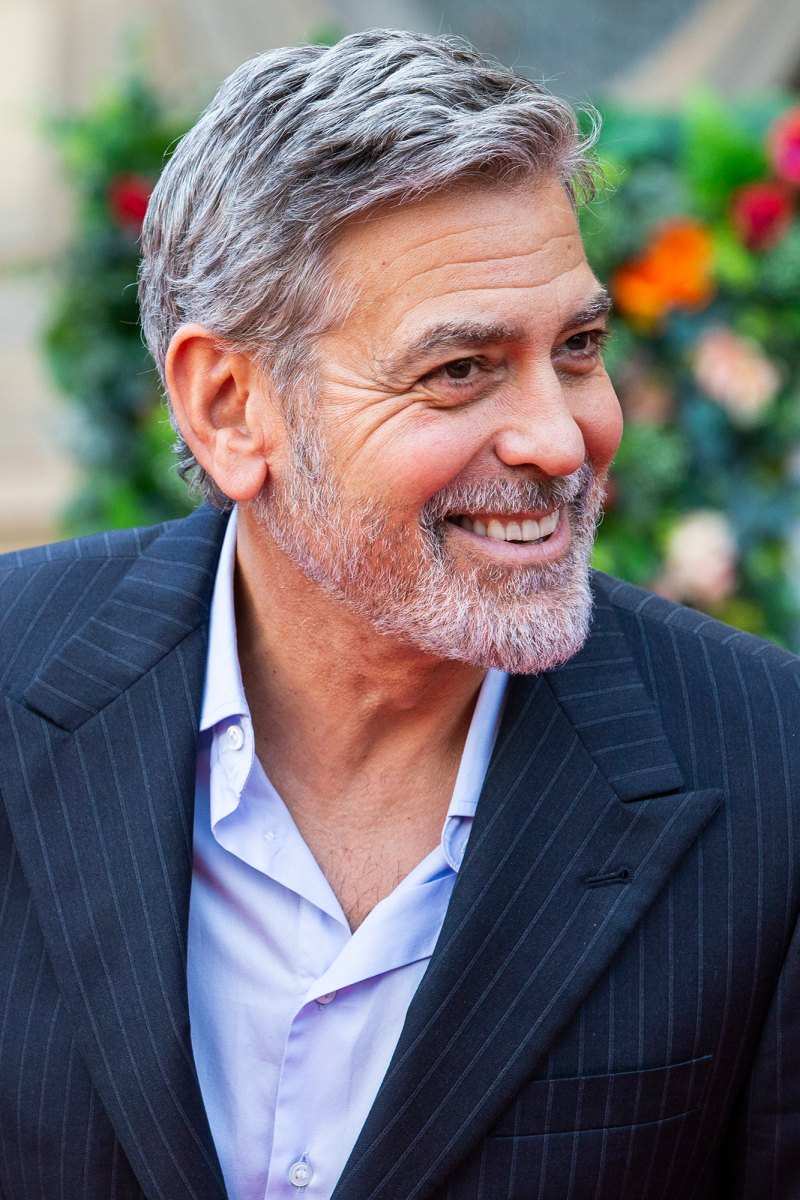 They’ve Got the Looks!

Clooney gushed about his little ones while out to dinner with friends in Los Angeles in June 2018, and even took out his cell phone to show new photos. “George told a funny story about how he and Amal have to keep the toilet seat down for the twins’ sake and then he started showing his friends photos of them,” an eyewitness told Us Weekly at the time. “George teased that the babies are like models and he never has to show them how to pose because they do it so naturally. He seemed like the proudest parent and just couldn’t stop showing photos and talking about how much he loves the kids.” 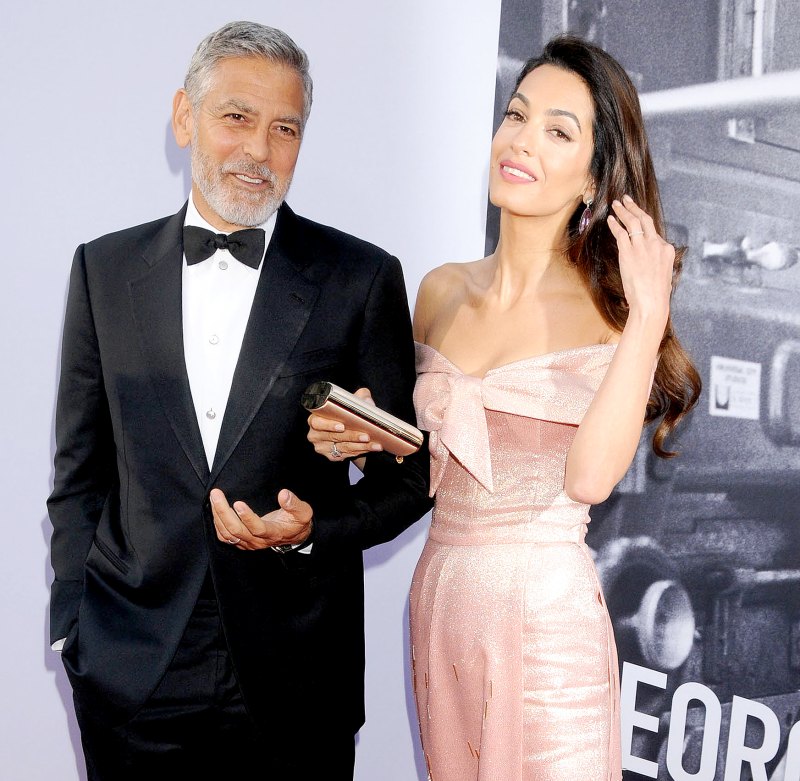 George opened up exclusively to Us Weekly about their twins’ 1st birthday while attending the taping of his AFI Life Achievement Award Tribute special in L.A. on June 7, 2018. “Well, the kids got drunk. I don't know what you guys were doing, but I came home, they had a bottle of booze,” he said. “It was really embarrassing, but they're feeling better today.” 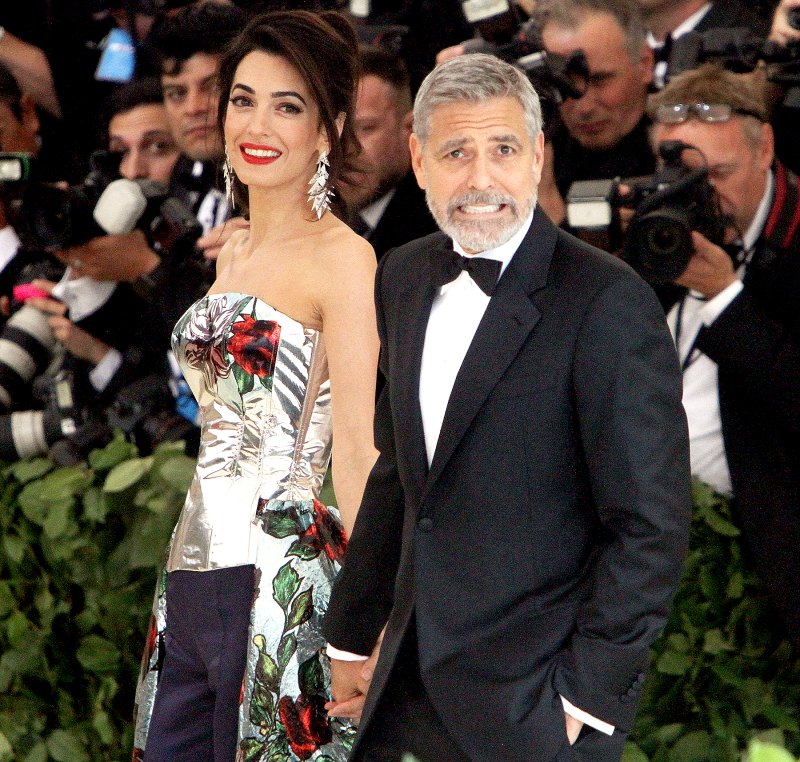 “I just have to clean the barf off of my tux. It used to be my barf but now it’s the twins’ barf. So it all works out,” George quipped to the Associated Press in August 2017. “I really didn’t think at 56 that I would be the parent of twins. Don’t make plans. You always have to just enjoy the ride.”

“Suddenly, you’re responsible for other people, which is terrifying. She’s like an Olympic athlete. She’s doing so beautifully,” the Up in the Air actor gushed to the AP in August 2017. 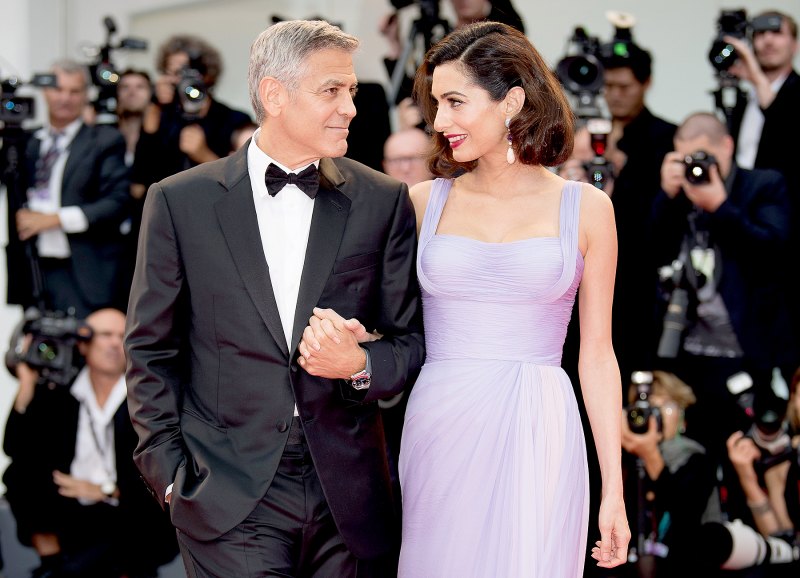 “I’m a very good diaper guy, which I didn’t expect,” the Oscar winner revealed to The Hollywood Reporter in September 2017. 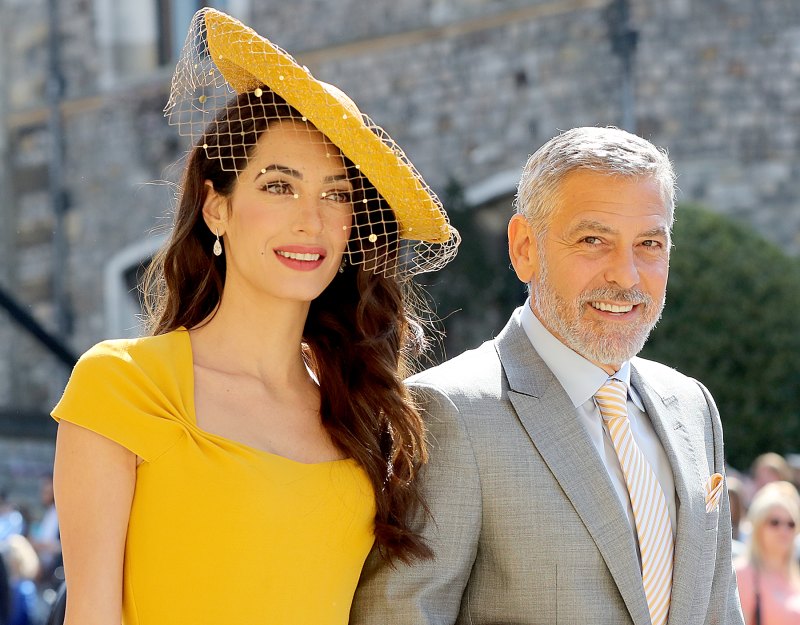 "They start out with a personality right off the bat … [Alexander] is a thug already,” George told Entertainment Tonight in September 2017 of his son, who is two minutes older than his daughter. “You saw him … He's a moose! Literally, he just sits and he eats."

"She's very elegant, and all eyes,” the proud dad raved to ET in September 2017. “She looks like Amal, thank god." 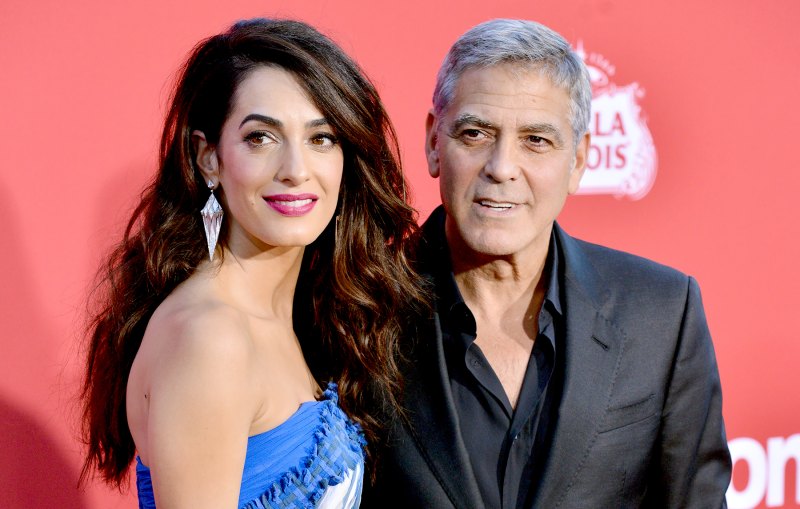 What’s in a Name?

“We just didn't want to have really dumb names …We figured these kids are going to be looked at a lot and watched and [have their] every move sort of judged, and we wanted them to at least have a break with the names,” George explained to ET in September 2017. “So we looked for some sort of normal names. We didn't have any great inspiration. It wasn't Alexander the Great and Ella Fitzgerald." 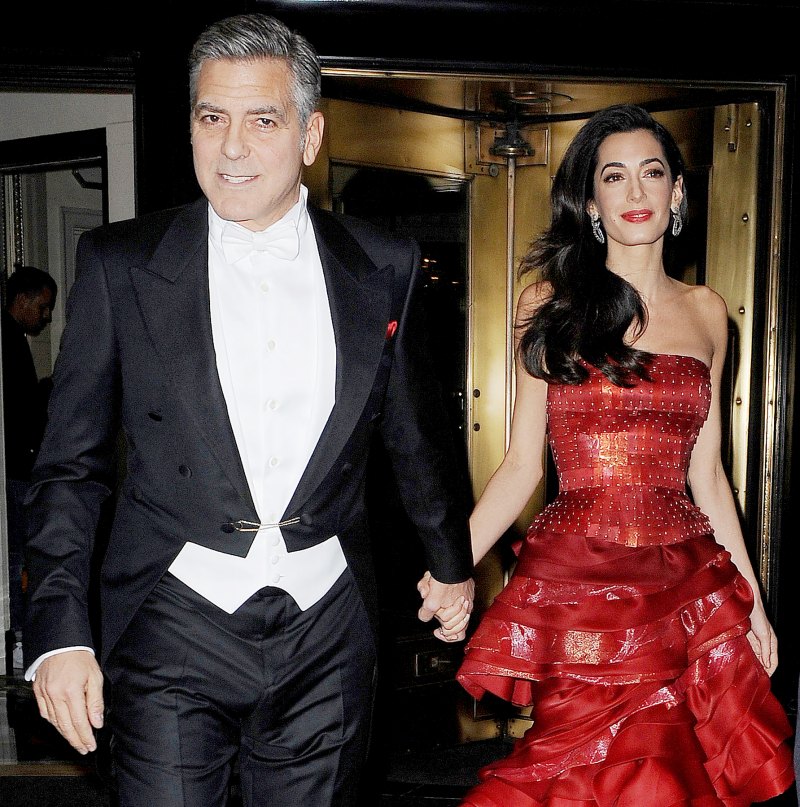 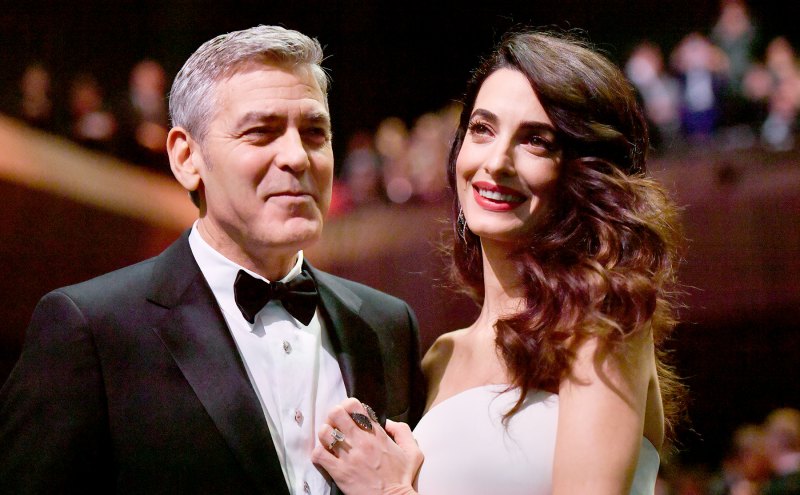 “Ella is very elegant and dainty … [Alexander] laughs louder than anyone in the room, it’s the funniest thing,” George told Extra in October 2017.

"We've had some 'Mamas' and 'Dadas,’” Amal dished to Vogue in April 2018. “George was very careful to ensure that 'Mama' was the first word.” 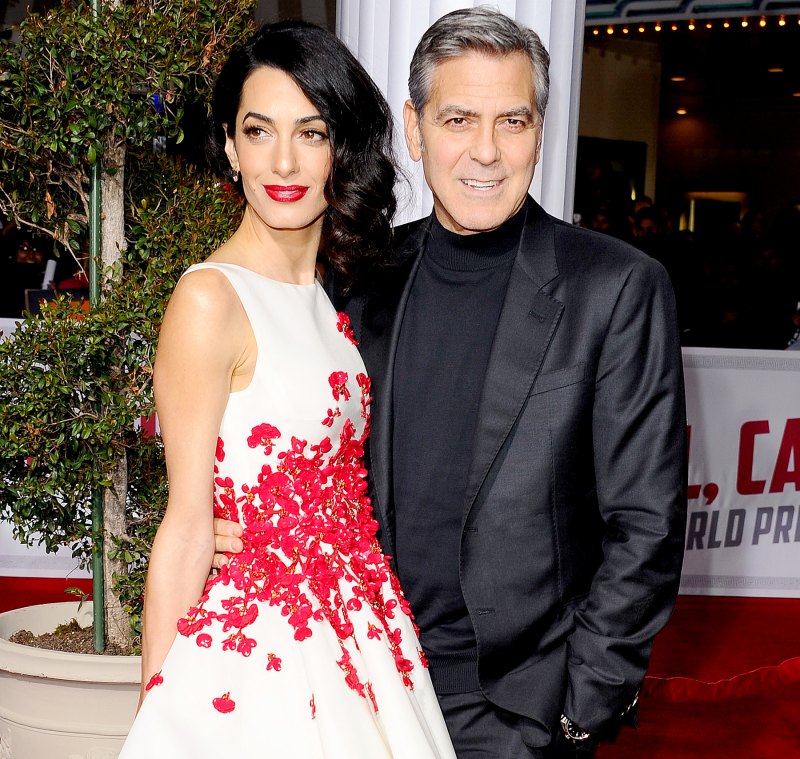 "He's quite a healthy eater … Between six and eight in the morning we get to have them in our bed—I don’t schedule any calls before eight,” the human rights layer told Vogue in April 2018. “When I was nursing, it was much more complicated, because there are two. I had all manner of weird cushions and pillows and machines.”

"They're good kids," Clooney said of Alexander and Ella on the Today show in May 2019. "They're happy kids. They laugh a lot. They do pranks already. Put peanut butter on their shoes, so that it looks like poo-poo on their shoes and stuff, and they think that's funny.”
He added: "They really come out with the personalities that they're born with. They're just completely different personalities, and they're fun and smart. I mean, they already can … do all their ABC’s in Italian and in English, and I can't do that in English.” 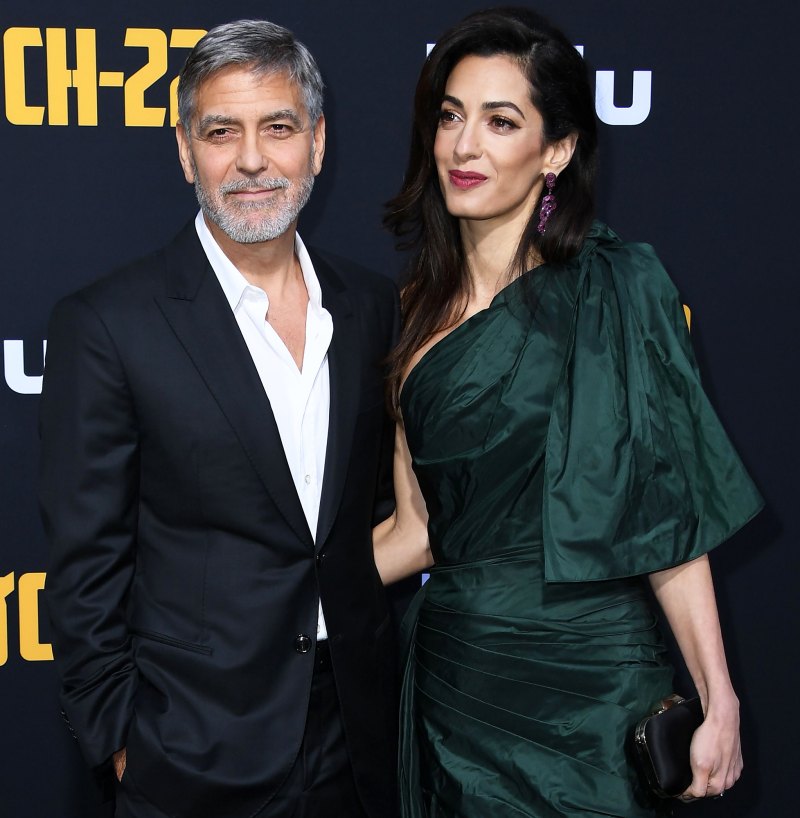 “They have their own personalities,” the Golden Globe winner winner told Ellen DeGeneres in May 2019. “He goes outside and hugs my car. … My daughter’s in my wife’s closet with purses going, ‘Mine,’ so I see this is going to be a fun, fun life for me.”


“I have a pretty good life,” the actor gushed on the “Awards Chatter” podcast in May 2019. “I have a beautiful wife and two beautiful kids, and I get to work on things I want to work on. I have to say, most people don't get to do that. I'm well aware of it.” 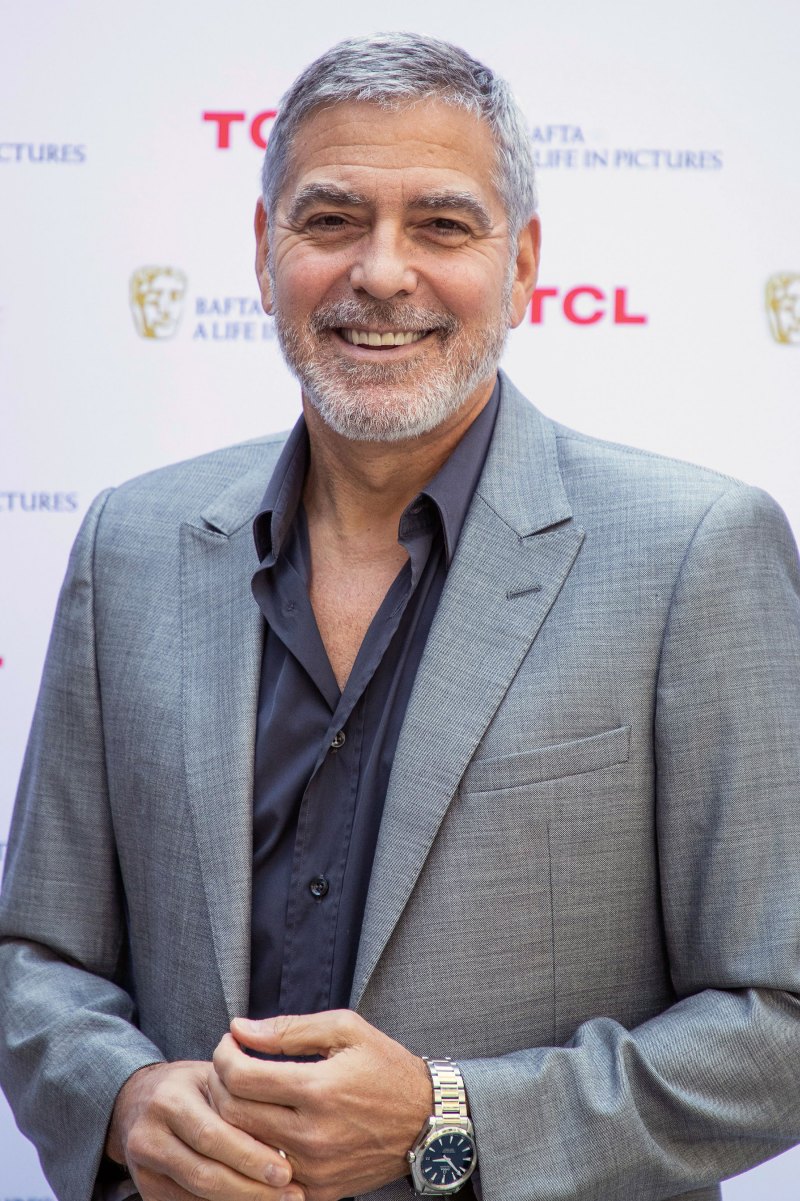 
[size=18]“I didn’t want, like, weird-ass names for our kids,” George told AARP in January 2021. “They’re already going to have enough trouble. It’s hard being the son of somebody famous and successful.” He added that Alexander has an advantage because by the time he starts to feel competitive, his dad will be "gumming bread."[/size]

I hadn't heard the santa story before!

It was from his interview with Stephen Colbert in December! I think it's somewhere on here.