Log in
Latest topics
» The Clooneys are the new owners of Brignoles, Var, Provence

» TALK OF THE TOWN: George and Amal Clooney see red as beach is shut: Officials raise the flag just a stone's throw away from couple's 25-room Italian hideaway because of dirty water

George Clooney keeps it casual while arriving at the Cambridge, Massachusetts set of his upcoming film The Tender Bar

By SAM JOSEPH SEMON FOR DAILYMAIL.COM

George Clooney was pictured arriving to the Cambridge, Massachusetts set of his forthcoming film The Tender Bar on Friday morning.

The 59-year-old actor appeared to be taking it easy as he strolled around the day's filming location, which is currently set at Lesley University.

The director's stroll comes not long after it was announced that Billie Lourd is in talks to join the cast of the upcoming film Ticket To Paradise, which Clooney is also attached to. 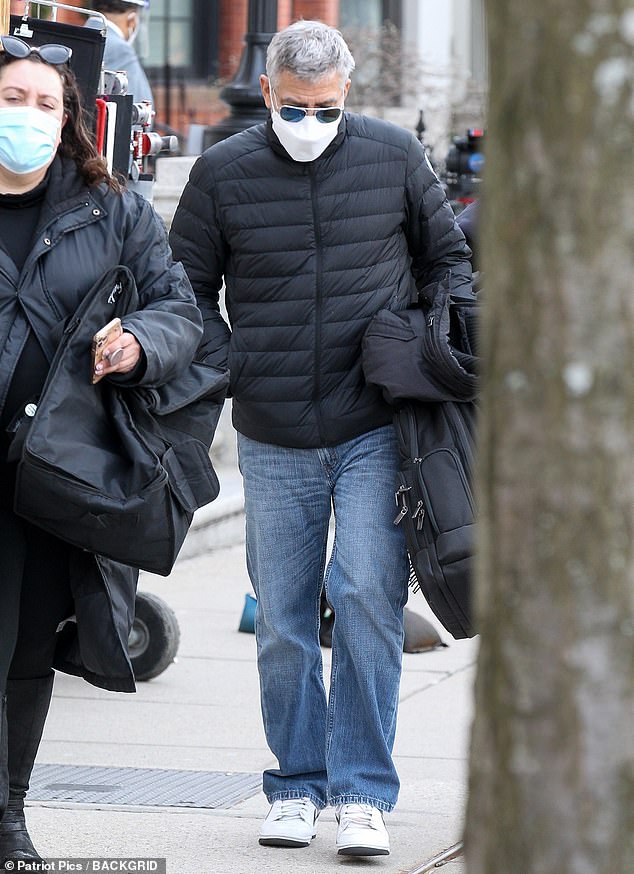 Heading to work: George Clooney was seen arriving at the Cambridge, Massachusetts set of The Tender Bar on Friday morning

The entrepreneur was casually dressed in a puffy black jacket, loose-fitting blue jeans and a pair of white Nike sneakers during his visit to the set.

Although he initially kept his head uncovered, Clooney eventually put on a patterned beanie for extra warmth in the chilly weather.

The Ocean's Eleven actor wore a sizable white facial covering while interacting with the film's cast and crew.
Development on The Tender Bar began in 2020; Sony Pictures was originally set to produce the film, but Amazon Studios picked up the project in July of last year. 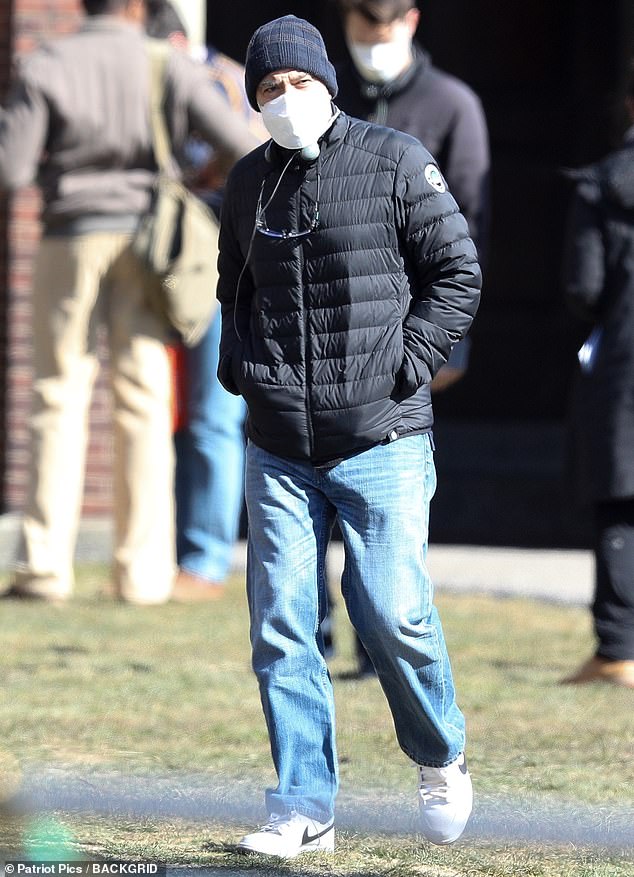 Casual attire: The From Dusk Till Dawn actor was dressed in a puffy black jacket, blue jeans and a pair of white Nike sneakers during his time on the upcoming film's set

The coming-of-age project is based on the 2005 memoir of the same name, written by JR Moehringer.

The screenplay for The Tender Bar was written by William Monahan, who won the Academy Award for Best Adapted Screenplay for his work on the 2006 crime film The Departed.

The From Dusk Till Dawn actor's role as the forthcoming film's director was confirmed in December of last year.
In addition to directing the project, Clooney also serves as one of The Tender Bar's producers. 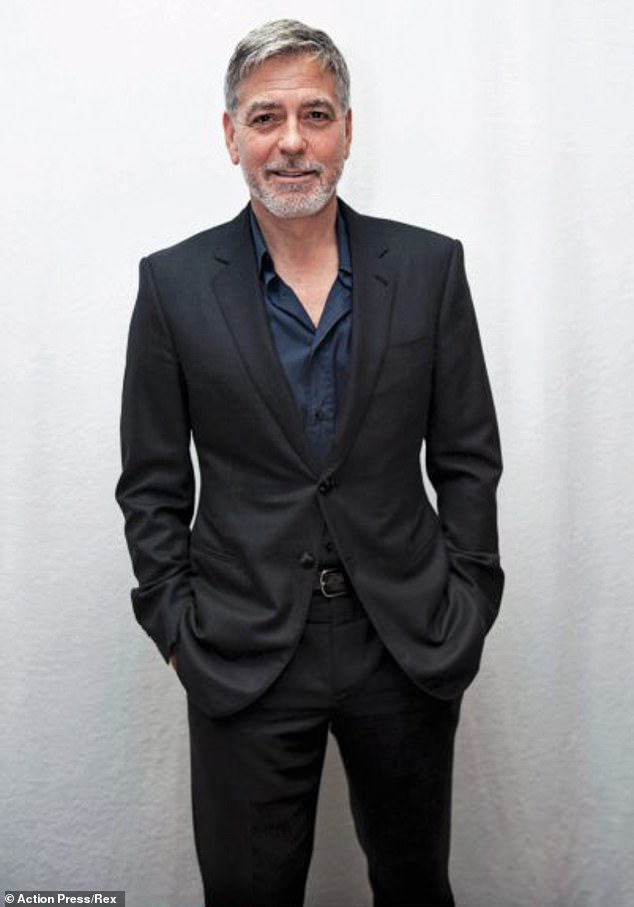 Dual role: In addition to directing The Tender Bar, Clooney also serves as one of the project's producers; he is pictured in 2019 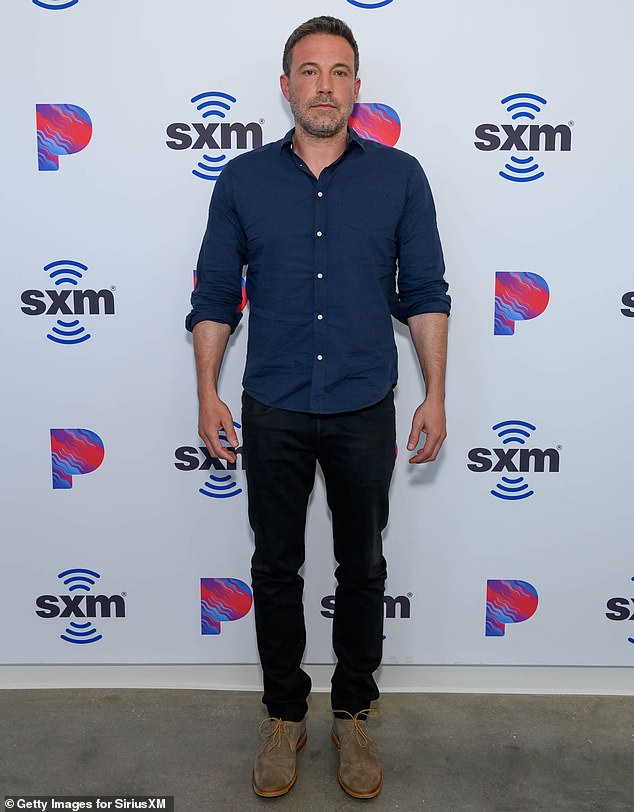 Featured actor: Ben Affleck and Tye Sheridan have been added to the cast of the upcoming film; the former is pictured in 2020

Principal photography on the project began late last month and is scheduled to run until the middle of this year.

On Friday, it was also announced that Billie Lourd was in negotiations to appear in another one of the Clooney's projects, entitled Ticket To Paradise.

The 28-year-old actress is in talks to portray Wren Butler, a college graduate who decides to marry a local during a trip to Bali. 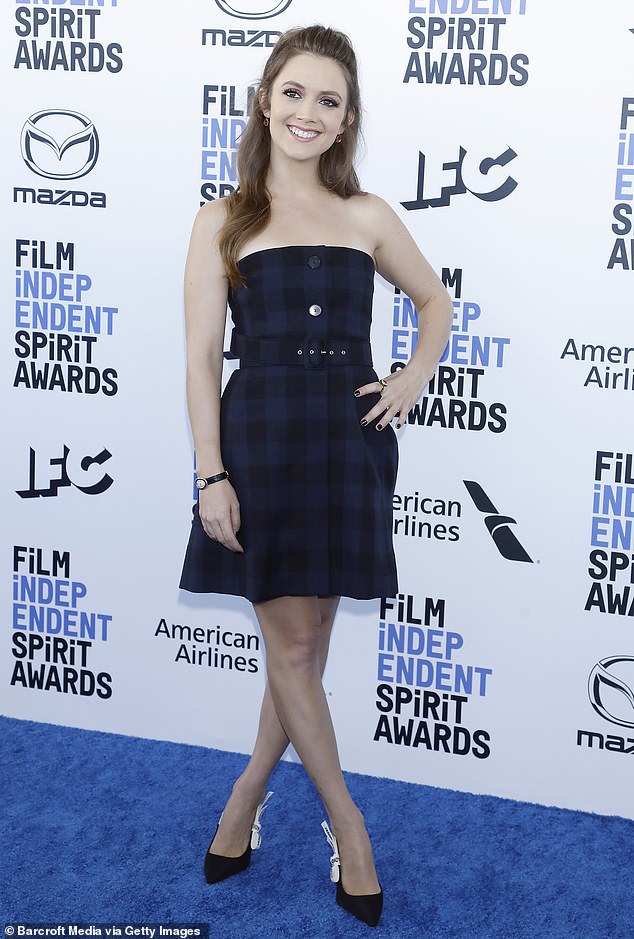 Making moves: On Friday, Deadline reported that Billie Lourd was in talks to join the cast of Ticket To Paradise, which Clooney is attached to; the actress is seen at the 2020 Film Independent Spirit Awards

According to Deadline, Clooney and Julia Roberts star as Butler's parents, who attempt to stop their daughter from making a reckless decision.

Ticket To Paradise is set to begin production later this year; the project will be helmed by Mamma Mia! Here We Go Again director Ol Parker.

Neither The Tender Bar nor Ticket To Paradise currently have set release dates.

Wow, he's got new trainers! Anyone else spot that? And a haircut, too, I think.

Yes he is wearing Nike's he looks good.

Honestly, he can afford to get a pair that fits!

I wonder why they called him the star of FDTD as if that was his most recent movie. He has made a few more since then,