» The Clooneys out to dinner at Gatto Nero restaurant - again

Yesterday at 16:25 by annemarie 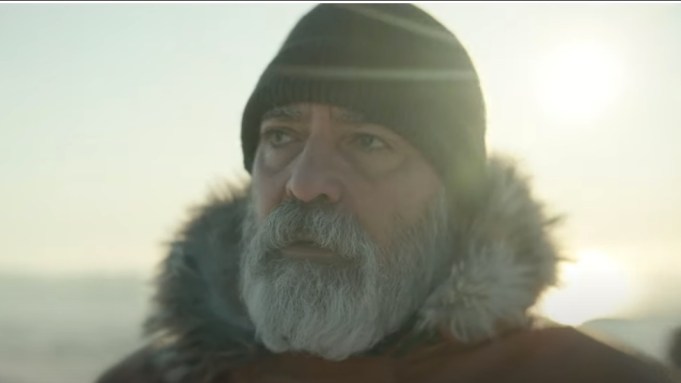 Netflix/YouTube
Netflix’s “The Midnight Sky,” an apocalyptic sci-fi drama starring and directed by George Clooney, offers insight into a possible future where unspecified destruction renders the earth uninhabitable.
In a trailer released on Tuesday, Clooney’s character is searching for a way to warn other survivors against returning to Earth after a global catastrophe. The film, based on Lily Brooks-Dalton’s novel “Good Morning, Midnight,” was shot ahead of the COVID-19 shutdown and before the onslaught of fires seen in 2020, but the calamities Earth faces in the film feel eerily similar.
“It’s science fiction, which unfortunately is less fictional as we move through the days,” said Clooney in an interview with Vanity Fair. “The sickness of hate and the elements that come from that, battles and wars — that has been percolating for quite some time.”


Clooney stars as Augustine Lofthouse, a scientist living in Antarctica who believes himself to be the last man alive on Earth until he finds a child named Iris (Caoilinn Springall). He finds himself obliged to care for the girl as he also takes it upon himself to contact the space crew and inform them of humanity’s demise.
Felicity Jones, David Oyelowo, Tiffany Boone, Kyle Chandler and Demián Bichir round out the film’s list of stars, as the five actors play the small crew aboard the NASA spaceship Aether. The crew’s journey through space in hopes of reconnecting with a radio-silent Earth forms the other half of the narrative.
Despite the tragedy at the center of “The Midnight Sky,” Clooney said he envisions the movie as having a glint of hope.
“I wanted it to be about redemption in a way,” he said. “I wanted there to be some hopefulness in a fairly bleak story about the end of mankind.”
“The Midnight Sky” releases on Netflix on Dec. 23. Watch the trailer below.