Pretty much a straight take from the Empire magazine interview

By DAVID LAWRANCE FOR DAILYMAIL.COM and BRYONY JEWELL FOR MAILONLINE
PUBLISHED: 07:23, 3 October 2020

George Clooney has spoken about how he worked around Felicity Jones' pregnancy for his latest film.

The 59-year-old actor-director told Empire magazine about the moment his 36-year-old star first told him her good news 'about three or four weeks into shooting' The Midnight Sky.

Challenges: George Clooney [R, in 2017] has spoken about how he worked around Felicity Jones' [L in December 2019] pregnancy for his latest film

Clooney said he first tried to shoot around the problem, explaining, 'The first thing we tried to do was shoot her and just do head replacement. Meaning we shoot each scene with her three times: once with her, once with a body double, and once with nothing in it.'

'But we started looking at it and thought, "She's not comfortable."'

It was then that George had the idea to write Felicity's pregnancy into the story of Sully, her astronaut character.

'Then it was really simply sitting down and going, "Okay, so, you know, people have sex! They're going to be in space for a long time and she's pregnant". I think it ends up adding to the story, in a way,' Clooney continued.

'It makes it kind of beautiful by the end.' 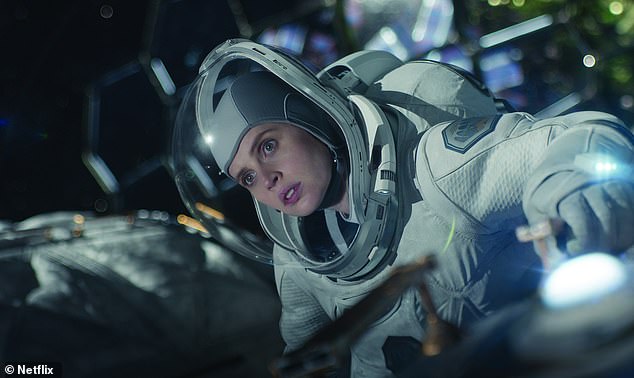 Co-star: Jones, 36, appears in the film as astronaut Sully, with George revealing that he adapted the movie to build in her real life pregnancy 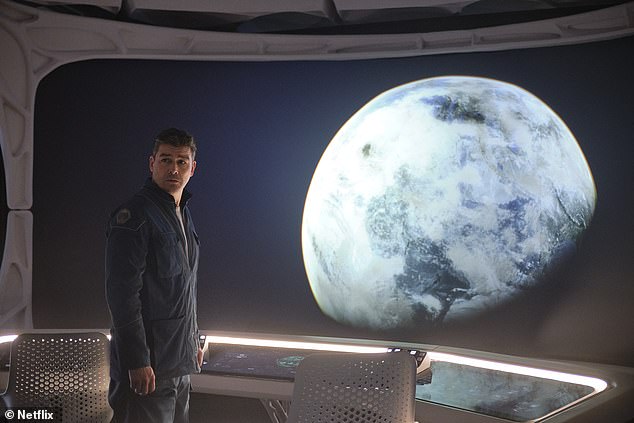 Space: Kyle Chandler also stars in the movie as pilot Mitchell and is seen standing by an image of an almost completely white planet Earth
Meanwhile, the Ocean's Eleven actor has a very different look from his usual suave appearance as he transforms into a 70-year-old scientist in his new movie.
In the first pictures from upcoming Netflix film, the actor is seen sporting a long beard and messily shaved head.

As well as playing character Augustine Lofthouse, George has directed the post-apocalyptic flick which also stars the aforementioned Jones and David Oyelowo. 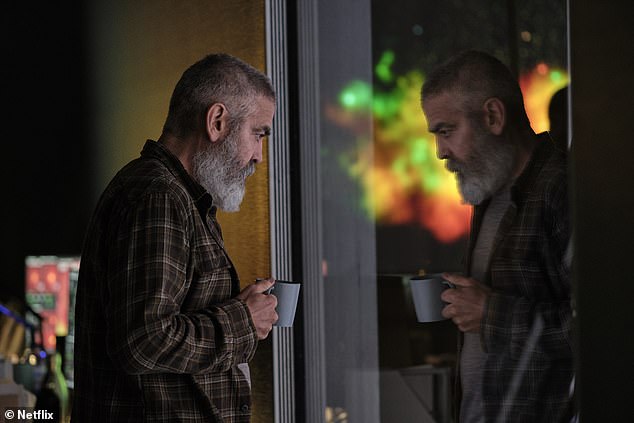 New role: George Clooney transforms into a 70-year-old scientist with a long beard and messy hair cut who lives on a remote arctic research station in new Netflix movie The Midnight Sky

George is barely recognisable in a new picture from the set, with the star having a beard and wearing a checked shirt.
His usually styled locks are also nowhere to be seen. George told Vanity Fair that he shaved his own hair off for the movie, purposely not trying to do a good job.

Speaking about the transformation, he joked: 'I have had a lot of people, the first couple of shots in the movie, not realise it's me... My wife was very happy when I finished shooting this.' 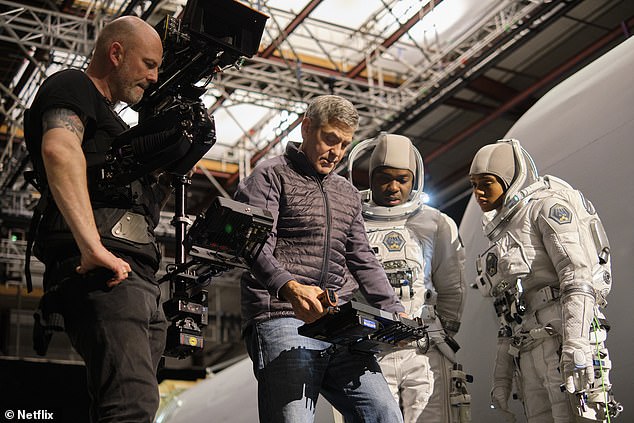 Behind the scenes: As well as acting, George has also directed the post-apocalyptic movie

The actor also revealed he doesn't believe he's keeping his youthful looks as he ages in real life, saying he's looking closer to his character's age of 70 than his 59 years.
Other pictures released by Netflix on Friday also show the Oceans Eleven star working hard behind the camera and his co-stars onboard their space ship.
The Midnight Sky follows Augustine (Clooney), a lonely scientist in the Arctic, as he races to stop Sully (Jones) and her fellow astronauts from returning home to a mysterious global catastrophe.

Sully and her team are on the NASA starship Aether after a journey to explore a moon of Jupiter, with the group discovering it to have a habitable climate. 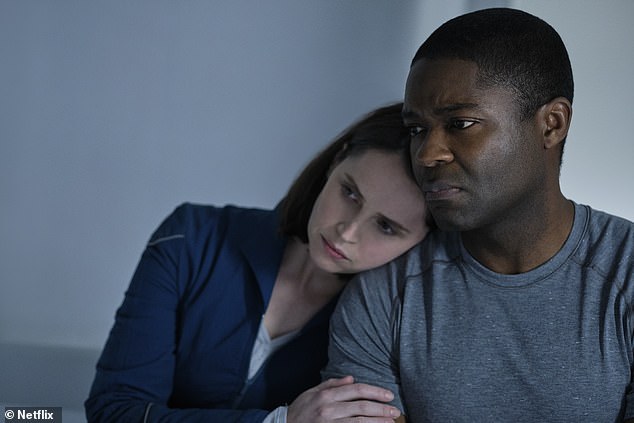 Testing times: The film shows a group of astronauts returning to Earth after a mission to a moon of Jupiter, with Felicity's character falling pregnant on the ship (Felicity and David Oyelowo pictured)

MailOnline exclusively revealed that Felicity had welcomed a baby with her husband Charles Guard earlier in September.

It is not yet known when exactly the actress gave birth. The baby's gender and name have also yet to be publicly revealed.

Touching on the current situation in his interview, George explained he finished filming the film in February before restrictions due to the coronavirus pandemic.
However he acknowledged the plot may be a little eery for some, saying that although it is 'science fiction', things are becoming 'less fictional' as time goes on.
The Midnight Sky, which also stars David Oyelowo, Kyle Chandler, Demián Bichir and Tiffany Boone, is set for release on Netflix this December. 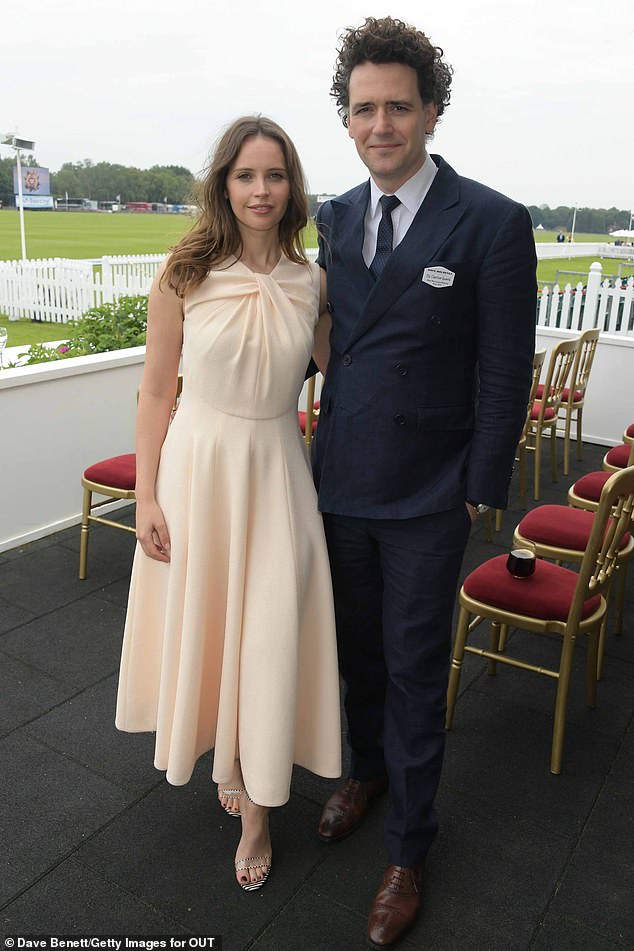 Mr and Mrs: Felicity dated director Charles Guard for two years before he proposed in May 2017. MailOnline revealed they had welcomed a baby in September (pictured in June 2019)