I just wanted to say Happy Birthday to the coolest guy I know.  I hope you have a filled fun and laughter. 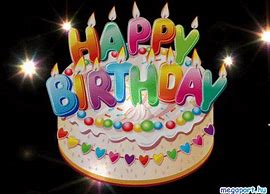 Happy birthday George, I'm sure Amal and the kids will make it a wonderful day for you.

Even though I've never seen George Clooney celebrate with Amal, I'm sure your right Annemarie.

Still a class act after all of these years!  I hope George is enjoying his 59th birthday with Amal and the kids!  Hope there’s cake and ice cream because that’s the best part of the celebration ... at least where kids are concerned.

So true, Donnmarie. A class act, a gentleman, and a guy who continues to fight for the disenfranchised around the world.

Maybe they will show us a glimpse of that on Instagram

Don't count on it. It's  almost always been a private family occasion and I don't see why it would change now. I hope they have a great day!

I think you are right Lizzy.  We probably will NEVER see that.  One can only hope.

As Amal said in response to her interviewer yesterday that he was unlikely to ever see anything from them on social media as they don't do any of it.........

Birthdays are funny ... they make you reflect on what might have been  And hopefully be grateful for what you have...

Nick Elgar/ImageDirect
Wednesday, May 6 marks George Clooney's 59th birthday, and he received a special shoutout from former "ER" co-star Julianna Margulies.
Margulies — who played nurse Carol Hathaway opposite Clooney's Dr. Doug Ross on the hit medical drama — took to Instagram to share a special photo from the set.
RELATED: Julianna Margulies Credits George Clooney With Saving Her Career
"Happy Birthday to my sweet pal George Clooney," she wrote accompanying a vintage photo of her and Clooney.
"This picture was taken right after we filmed our very last scene together in Seattle for #ER," she continued.

Margulies concluded by adding a few pandemic-themed hashtags aimed at President Donald Trump, referencing the recent press conference when he suggested scientists study whether COVID-19 can be treated by ingesting or injecting cleaning products: #staysafe, #dontdrinkbleach, #dontinjectlysol, #listentoscience.
In a 2018 appearance on "Late Night with Seth Meyers", she discussed how she and Clooney reunited in Seattle for that surprise appearance in the final season of "ER".
RELATED: Julianna Margulies Reveals The Parenting Advice She Gave ‘ER’ Co-Star George Clooney
“We did all of that in secret," she explained. "No, I mean, not even the cast and crew knew,” Margulies shared. “They flew us to Seattle, but they flew George on the Warner Bros. private jet. I took commercial.”