Ok then, the wit and wisdom of George Clooney.  Which one(s) appeal(s) to you the most?


The road wasn't always easy.
George Clooney was born on May 6, 1961 in Kentucky. Due to his father's work, he had to move plenty of times throughout his childhood.
Clooney started acting since he was 5 years old, playing characters run by his dad at a local show. Clooney dreamt of becoming a baseball player throughout his childhood, but eventually he went to college (Northern Kentucky University) where he studied broadcast journalism. He dropped out of school in 1981 and worked labor jobs until he was given his first acting role in a film in Kentucky about horse racing. The film was never released, but it gave George Clooney the inspiration to make this is a possible future career.


RELATED: 20 Powerful Mental Health Quotes From Celebrities
Clooney decided to move to Los Angeles to become an actor. Slowly parts came, even if they weren't the kind of roles he truly wanted. Clooney worked steadily in Hollywood, but he had yet to land a role that would put him in the spotlight, but that all changed in 1994, when he had a role in a medical drama called ER.
Clooney appeared in several films during his time on ER like From Dusk till Dawn, One Fine Day, Batman & Robin, and Steven Soderbergh's Out of Sight.

He won a Golden Globe Award. Clooney also joined with Mark Wahlberg for the disaster-at-sea film The Perfect Storm.
George Clooney has had a noteworthy career with many twists and turns. As a man who never end saw acting as a possibility when he was young his life is an example of how you can truly shape yourself into the person, you want to be through hard work.
Here are the best George Clooney quotes from the man People magazine twice named him the "Sexiest Man Alive" that will both inspire you and motivate you to work hard for everything you want in a future career.

1. Art represents who we are. 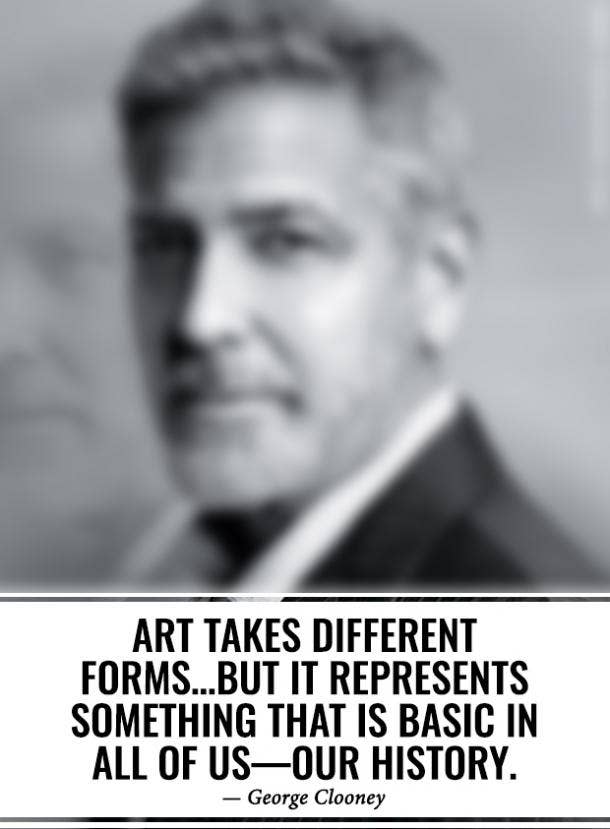 “Art takes different forms… But it represents something that is basic in all of us—our history.”—George Clooney
RELATED: Is Amal Clooney Pregnant? New Rumors She's Expecting Again With George Clooney

3. Be the character of your book.

“You have only a short period of time in your life to make your mark, and I’m there now.”―George Clooney

4. Don’t try to control the uncontrollable.

“The simple truth is everyone has an opinion, everyone has the right to voice it, and they should if they want to.”―George Clooney

“You need to have flopped quite a few times to get a sense of how little any of it has to do with you.”― George Clooney

“If we turn our heads and look away and hope that it will all disappear then they will – all of them, an entire generation of people. And we will have only history left to judge us.”― George Clooney 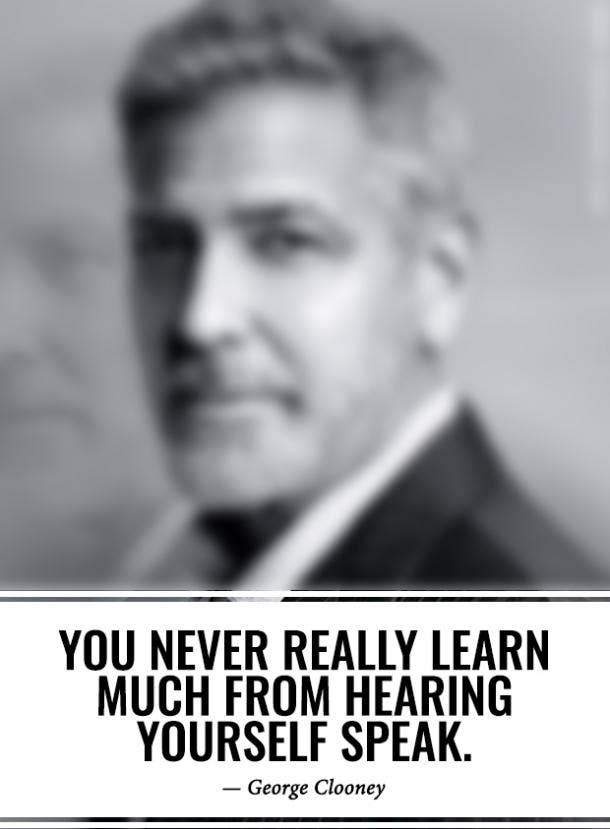 “You never really learn much from hearing yourself speak.”― George Clooney
RELATED: 5 Things That Prove George And Amal Clooney's Marriage Is ROCK SOLID

8 Accept what you can’t control.

“I’m kind of comfortable with getting older because it’s better than the other option, which is being dead. So I’ll take getting older.”— George Clooney

“I had to stop going to auditions thinking, ‘Oh, I hope they like me.’ I had to go in thinking I was the answer to their problem. ”— George Clooney

“The only failure is not to try” ― George Clooney

“Anyone would be lying if they said they didn’t get lonely at times.”— George Clooney

“When you’re young you believe it when people tell you how good you are. And that’s the danger, you inhale. Everyone will tell you you’re a genius, which you are not, and if you understand that, you win.”― George Clooney

“There are quite a few things that the devil could tempt me with… I could be tempted by youth if I was allowed to hold on to all the wisdom that I’ve gotten. In everything, not just sports. In life. In acting. I’d be tempted by youth only so I could continue doing it a little longer.”— George Clooney

15. Everything you do is to better your status. 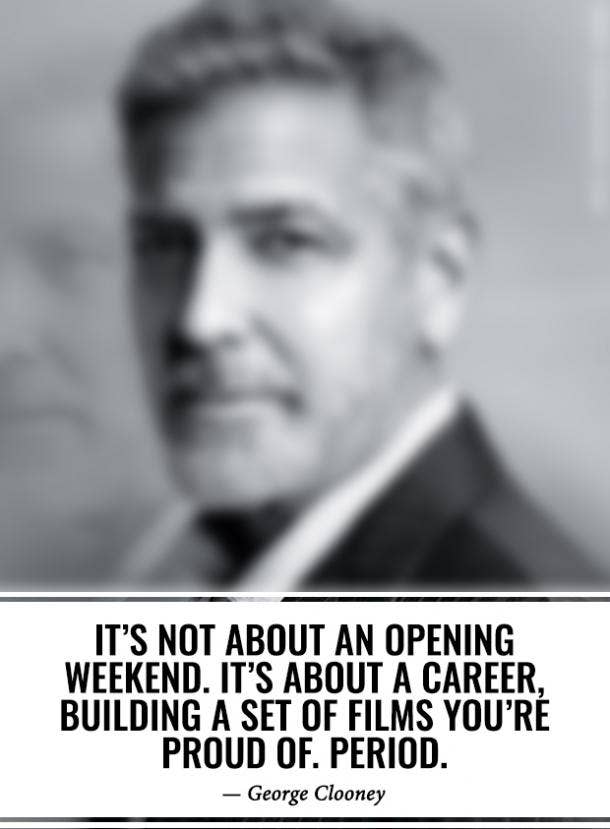 “It’s not about an opening weekend. It’s about a career, building a set of films you’re proud of. Period.”– George Clooney
RELATED: George Clooney Marriage Bet with Michelle Pfeiffer Now at 100,000 Dollars

“Directors are the captains of the ship, and it’s your job as the lead actor to make sure that the rest of the cast understands that by doing whatever he says.”–George Clooney

“It’s possible for me to make a bad movie out of a good script, but I can’t make a good movie from a bad script.”– George Clooney

18. Have a strong work ethic to play the best role.

”In doing the screenplay for ‘Good Night, and Good Luck,’ the most important thing for me was to constantly go back to wherever the opposition would argue. So I had to keep reading all the books and articles about why McCarthy is such a good guy.”- George Clooney

”You can only get so far without discernible talent.”– George Clooney 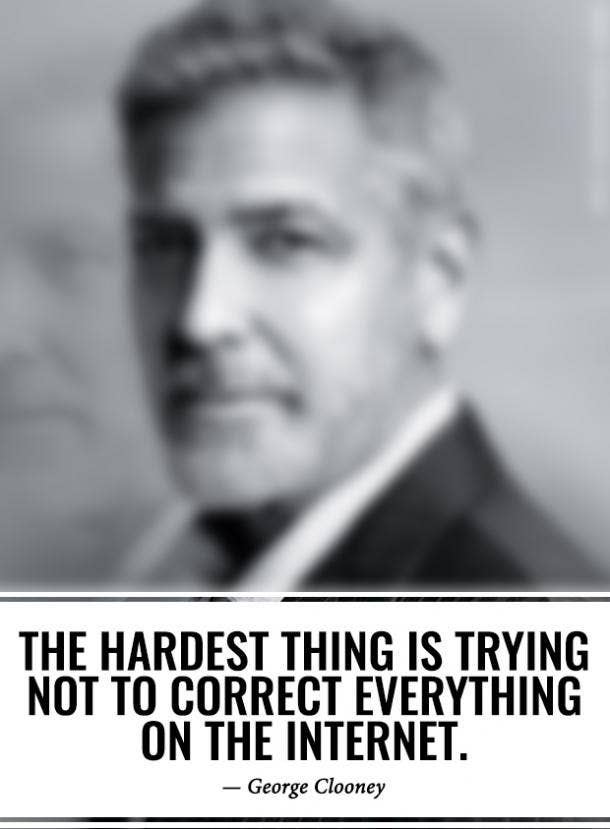 “People know everything about everybody now.”– George Clooney

”Directing is really exciting. In the end, it’s more fun to be the painter than the paint.”– George Clooney

“When you first start out, you are just happy to get a job, any job. And as time moves on, either you move forward or screech to a halt.”– George Clooney

"I think it’s the most responsible thing you can do, to have kids.”– George Clooney

“I find that as you get older, you start to simplify things in general.”– George Clooney

“Growing old on screen is not for the faint of heart.”– George Clooney 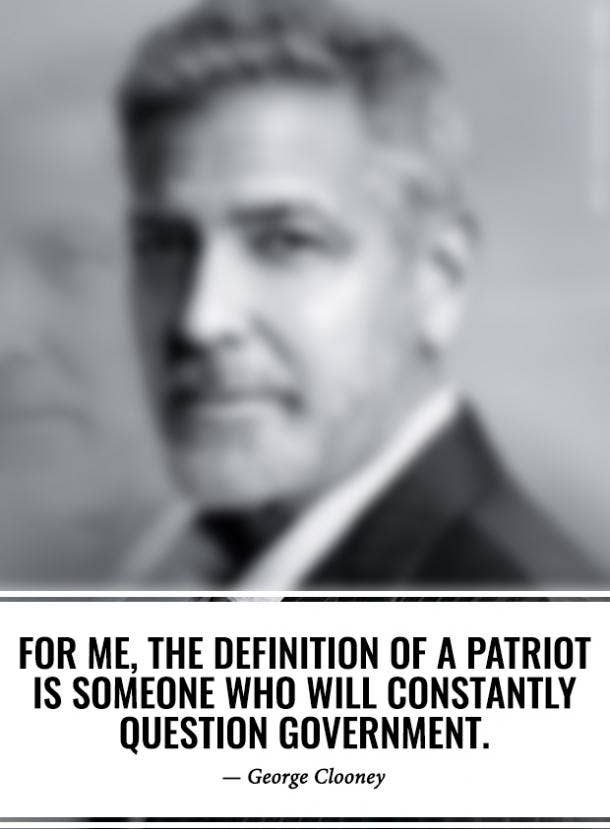 ”For me, the definition of a patriot is someone who will constantly question government.”– George Clooney