They've been enjoying some down time at their lavish Lake Como residence.
And, George Clooney and wife Amal looked more loved-up than ever as they cosied up to watch a 4th of July fireworks spectacular from aboard a boat on the third-largest lake in Italy.
Displaying their romantic sides, the Human Rights lawyer, 41, sat on her husband's, 58, knee as they stared up at the night sky to watch the annual display whilst surrounded by a small group of friends. 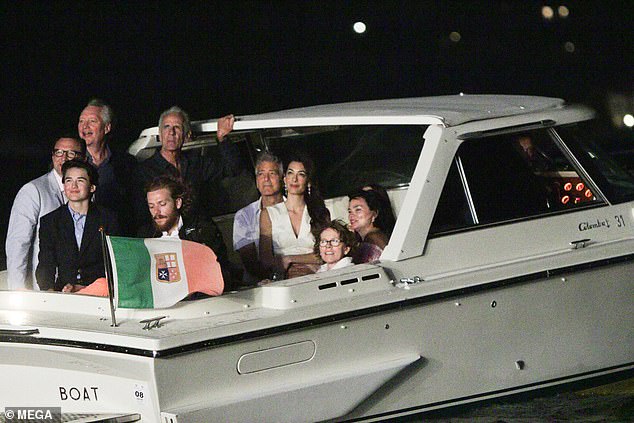 
Couple goals: George Clooney, 58, and wife Amal, 41, looked more loved-up than ever cosied up as they watched a 4th of July fireworks spectacular from aboard a boat on the third-largest lake in Italy
Later in the evening, the pair stayed close together as they strolled through the quiet, lamp-lit streets.

Share
The mother-of-two oozed sophistication in a sleeveless, plunging white top and a coordinated lower-half.
Injecting even more glamour into her chic appearance, the British-Lebanese beauty accessorised with a pair of statement earrings. 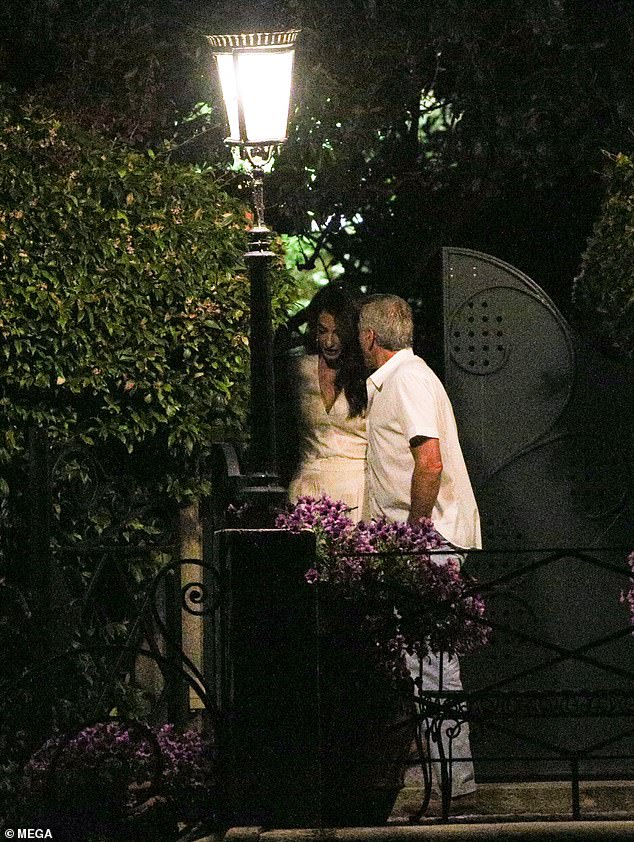 
Romantic evening: Later in the evening, the pair stayed close together as they strolled through the quiet, lamp-lit streets
[size=18]George Clooney offers chance to have date with his wife Amal


[/size][/size]
The couple, who tied the knot in September 2014, enjoyed a night off from parenting duties to their adorable twins Alexander and Ella, 24 months.
George and Amal have no qualms about enlisting help from their friends and their family to raise their little ones while maintaining high-profile careers, according to People.
The Clooney's recently acknowledged the network they've created and are 'very humble when they speak about their family.' 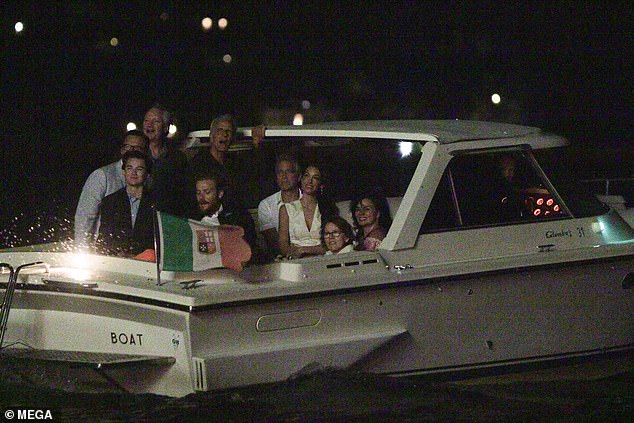 
Sweet: The Human Rights lawyer sat on her husband's knee as they stared up at the night sky to watch the display whilst surrounded by a small group of friends
'They always remind friends that life with kids is easier for them because they have help, but help or not, they are amazing parents,' a source said.
Amal, a human rights lawyer, gave birth to the couple's children in June 2017, three years after the couple wed.
'Despite his success, George has always been a family boy,' an insider revealed. 'He’s having a wonderful time watching the kids play, laugh, grow up and relate to him.'[/size]

The fail is a mess, they aren't strolling through  the streets they are going down the ramp to their boat.

Talk about being romantic! George ClooneyOpens a New Window. and his wife Amal took some time off their busy schedule to celebrate the 4th of July, as the pair was spotted taking in the beautiful fireworks on Lake ComoOpens a New Window.!
The 58-year-old and his love, 41, were seen looking up in awe from a boat in Italy — where they have a home — on Thursday, July 4. The pair were joined by others, as the group all enjoyed the holiday, like many other celebrities didOpens a New Window.. The actor wore a white dressed shirt and slacks, while Amal spent the night in a light colored dress.
The famous couple tied the knot in 2014, and they share two kidsOpens a New Window. — twins Alexander and Ella, 2. However, there may not be another member added to the family in the near future. “Amal says their hands are full,” a friend — who noted that the duo has stated they’re “done” having kids — exclusively told Closer WeeklyOpens a New Window.. “But then they think of the Syrian children that need homes and they get really serious. Bringing home a Syrian refugee child would be a dream fulfilled for Amal.”
Parenthood has also made the happy pair content in unexpected ways. “George has become even more easy going,” the pal said. “Amal has slowed down, too. She’s learned to sit on the floor, play with the babies and be happy.” How sweet!
Scroll on down below to see more photos of George and Amal celebrating America!

MEGA
While the power couple are quite private, they have spoken about their love for each other on numerous occasions. “I met George when I was 35 and starting to become quite resigned to the idea that I was going to be a spinster,” Amal told the audience at the American Film Institute’s Life Achievement Award GalaOpens a New Window.. “Then we met and started hiding out in my London flat and very soon it felt like, no matter what happened, I would never want to be with anyone else.”

MEGA
“I couldn’t sleep when we were apart, and I’m told that I would display a particular grin and head tilt when reading his text messages or the letters he would hide in my bag,” Amal continued. “Five years later, none of that has changed: He is the person who has my complete admiration and also the person whose smile makes me melt every time.”

MEGA
“I’m so proud of you, my love. I also know that when our children find out not only what you have done but who you are, they will be so proud of you, too,” the human rights lawyer concluded, before the Oscar winner was given the AFI Life Achievement Award. 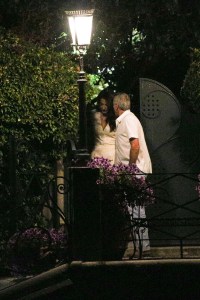 MEGA
“All I know is [marrying Amal] sort of changed everything in terms of what I thought my future — my personal future — was going to be,” the Ocean’s Eleven star once told PeopleOpens a New Window.of his marriage. “I wasn’t always completely optimistic about how [things were] going to work out personally for me. But now I am.”

MEGA
That wasn’t the first time George has gushed about his wife, as he once accepted the Cecil B. DeMille Award at the Golden Globes and said, “It’s a humbling thing when you find someone to love. Even better when you’ve been waiting your whole life. Amal, whatever alchemy brought us together, I couldn’t be prouder to be your husband.” So lovely!

GEORGE CLOONEY and his wife Amal Clooney looked loved-up as they celebrated the 4th of July in Lake Como, where they first met six years ago.

George Clooney, 58, and Amal Clooney, 41, couldn’t keep their hands off each other as they took to the water on Lake Como to watch the fireworks to mark the 4th of July. The Catch-22 actor appeared completely smitten with his human rights lawyer wife as they joined friends for the celebrations. The group were pictured out on a boat, gazing up at the sky for the impressive display. Amal stunned in a delicate white blouse and matching wide-legged trousers which drew attention to her slim figure.

[size]
George, meanwhile, put on a dapper display in pale blue trousers and a casual short-sleeved shirt, which he wore with an open collar.
During the fireworks, Amal sat on her famous husband’s lap as he wrapped his arms around her waist, pulling her in close.


She accentuated her striking natural beauty with smokey eye makeup and a slick of deep pink lipstick, accessorising with drop earrings.

Her dark tresses were styled into a loose down ‘do of gentle waves.
The couple first met in Lake Como back in 2013.
PROMOTED STORY
[/size] 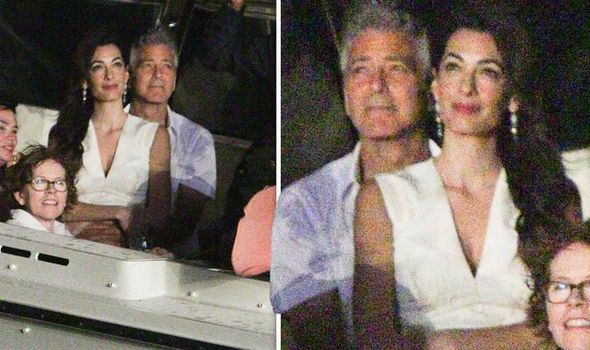 George Clooney and Amal Clooney put on a cosy display for the 4th of July celebrations (Image: MEGA) 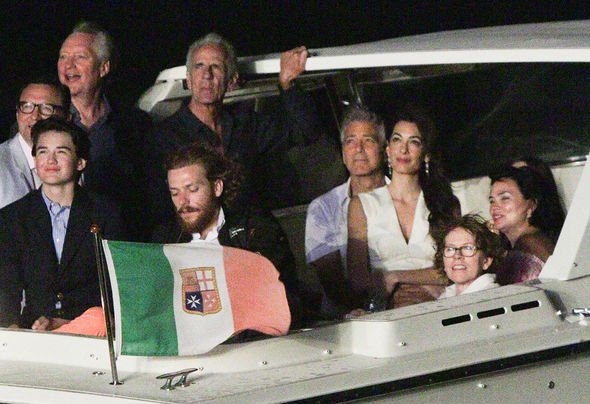 George Clooney and Amal Clooney enjoyed the fireworks at Lake Como where they first met (Image: MEGA)
On the subject of what his now-wife thought of him, he joked she “probably thought I was old”.
The following year, George popped the question and they later tied the knot in Venice, Italy.
George and Amal are now parents to two-year-old twins Ella and Alexander.
Last week, Amal Clooney wowed in white as she was pictured out and about with her husband on their romantic Italian getaway.
Looking characteristically glamorous, she was snapped heading to dinner in a white minidress with an asymmetric neckline. 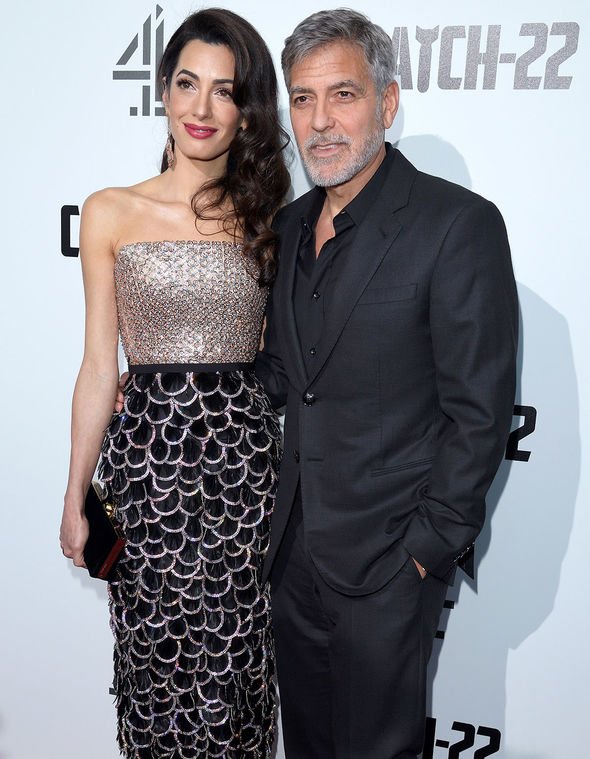 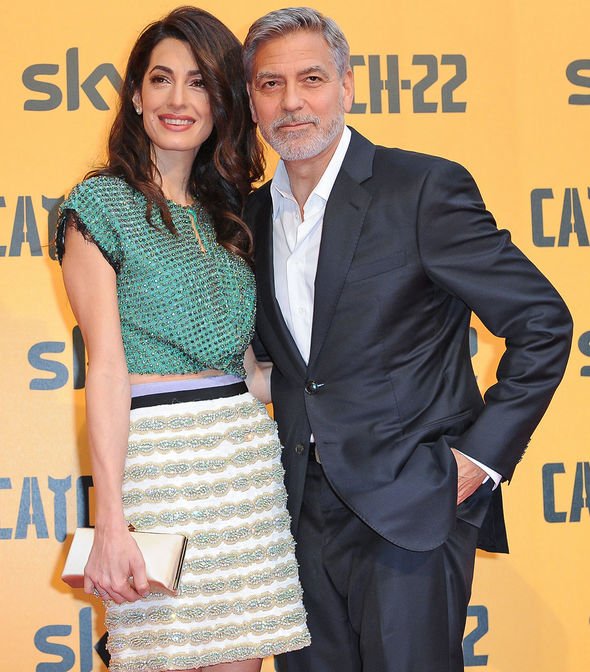 George Clooney and Amal Clooney are parents to two-year-old twins Ella and Alexander (Image: GETTY)
Soaking up the blazing sunshine, she flashed a glimpse of her slender pins in the chic number, which finished just above her knees.
She paired the look with nude heeled sandals, a white bag and an oversized black sunhat.
Accessorising with large dark sunglasses, Amal was seen being helped into a boat by George.
Elsewhere, George’s latest TV show, an adaptation of Joseph Heller’s Catch-22, is currently airing on Channel 4.
In the small screen version of the satirical novel, the Hollywood A-lister plays training commander Scheisskopf.[/size]

Exactly. Thank you Benex and Annemarie.

I see George has quite a few of the 'boys' there - Karen Duffy's husband, Ben Weiss, David Sagal and his wife...

Lysa Heslov sent love to all on social media....