George talks about twins with Amal

George talks about twins with Amal

Just like dad! George Clooney says his twins are already pulling pranks
The "Catch-22" star opened up about how much he enjoys being a dad.

George Clooney's kids are chips off the old block!
The actor, who's notorious for pranking his Hollywood pals, says his nearly 2-year-old twins, Ella and Alexander, are already playing tricks on him. "They're happy kids. They laugh a lot. They do pranks already," he proudly told Savannah Guthrie in an interview that aired Tuesday on TODAY.

"They put, like, peanut butter on their shoes, so that it looks like poo-poo on their shoes and stuff," he shared, laughing. "They think that's funny."
The two-time Oscar winner, who appeared on the show to promote his new Hulu series, "Catch-22," couldn't help sharing how fun it is to be a dad. Clooney says his and wife Amal's twins are "fun and smart."Neil Mockford / GC Images
One thing that's surprised him about having kids is how early their personalities form.
"You can see it, because they're twins. They really come out with the personalities that they're born with, you know?" he said.


"My daughter'll be, like, 'Sit down' ... and then he'll sit down, and you know, they're just completely different personalities," he added.
The former "ER" star, who shares Ella and Alexander with his wife, human rights attorney Amal Clooney, described both his little ones as "fun and smart." "I mean, they already can do all their ABCs in Italian and in English," he boasted, joking, "I can't do that in English."
Watch Clooney gush about his children in the video above! 
George Clooney gushed over his nearly two-year-old twins on Tuesday, claiming that they can already say their 'ABCs in Italian and English'.
Clooney was speaking to Today host Savannah Guthrie with his Catch 22 co-stars Kyle Chandler and Christopher Abbott when he was asked about twins Alexander and Ella.
The pair will be two next month but have already mastered the alphabet in two languages, Clooney said proudly.
'They're good kids, they're happy kids. They laugh a lot. They do pranks already, put like peanut butter on their shoes so it looks like poo poo on their shoes so they think that's funny.

Scroll down for video 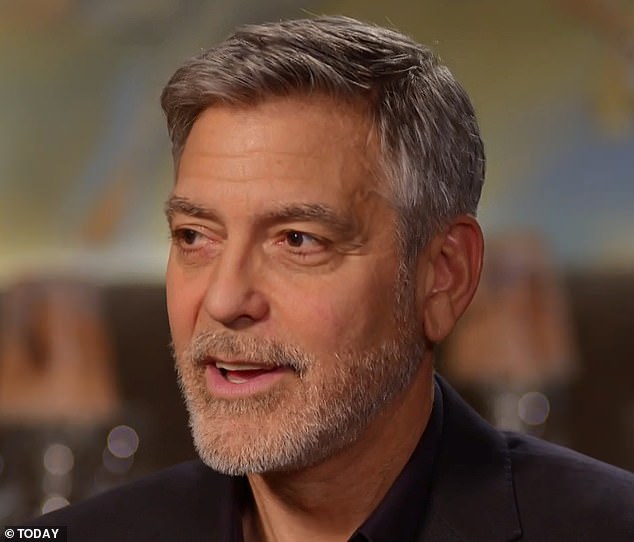 
George Clooney gushed about his family on Tuesday as he revealed that his 'smart and funny' twins, Ella and Alexander, could say the alphabet in two languages 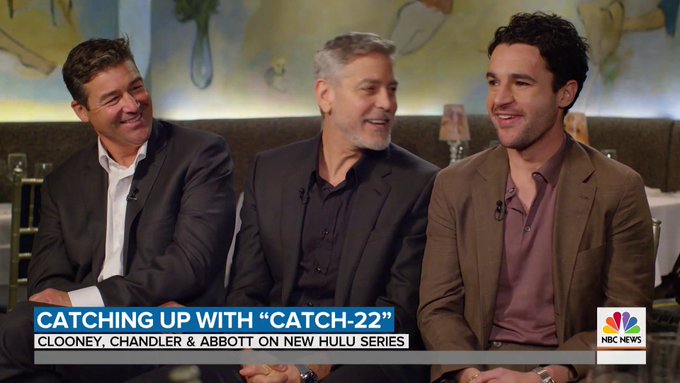 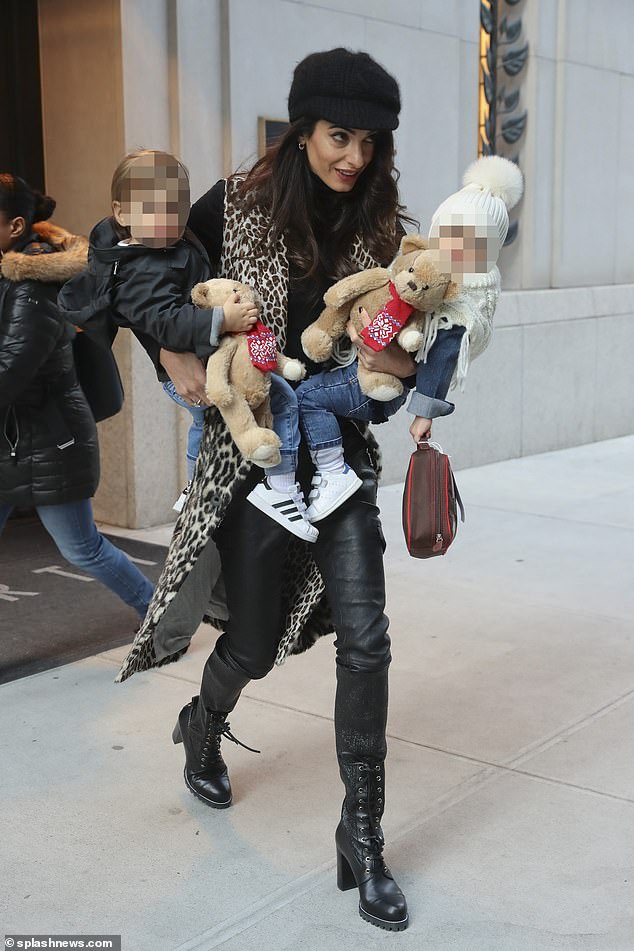 
Clooney and his wife Amal, shown with Ella and Alexander last year, welcomed their twins in June 2017. They will be two next month
'You can see it because they're twins, they really come out with the personalities that they're born with,
'My daughter will be like, "Sit down!" and he'll sit down.
'They're just completely different personalities and they're fun and smart.
'They already can do all their ABCs in Italian and in English. I can't even do that in English!' he said.
He also gushed over his 'incredible' human rights lawyer wife Amal and how she balances her career with home life.
'She's taking ISIS to court for the first time anybody's taken ISIS to court, she's defending the Yazidis for the genocide they experienced, she's working on trying to get the Reuters journalists out of Myanmar, she's doing all that and she's also an incredible mom, like an incredible mom and a pretty great wife too so I feel like I hit the jackpot,' he said. 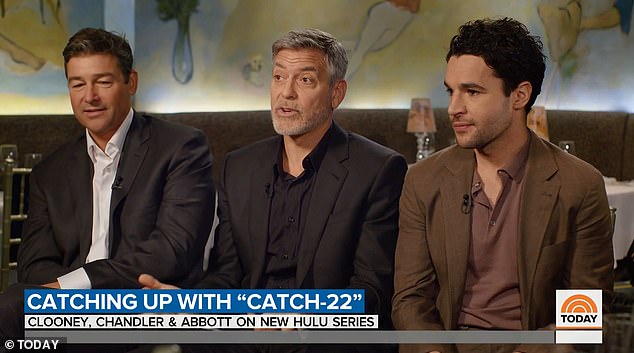 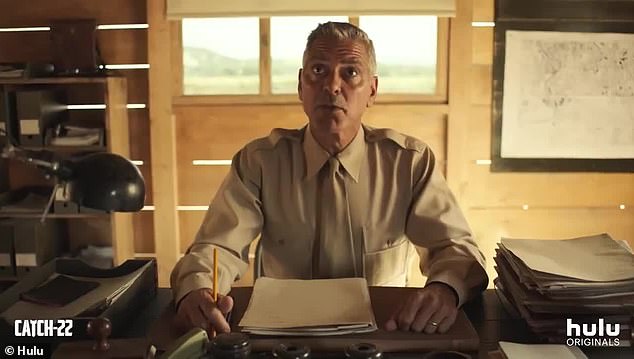 
The pair have been married since 2014 and welcomed their twins in 2017.
Clooney has been fiercely protective of their privacy ever since but has spoken openly about his pride for the pair.
He took part in the interview to promote his new Hulu mini-series, Catch 22, in which he plays Lieutenant Scheisskopf.
He said playfully that it was his 'return to TV' after years of filming only movies.
Elsewhere in the interview he recalled meeting Paul Newman on the Warner Bros studio while he was filming ER and how Newman advised him not to let fame deter him from leading a normal life.
'He goes, "Just dpn't let them keep you inside. Your tendency is to try to hold on to your privacy, so much because it is taken away, your tendency is to pull back and not to do things and he was like, "Get out, don't let that happen."'
He praised Abbott's performance in the series and said he was eager to sign on to the project because of the 'really good' scripts.
Clooney also produces and directs some of the episodes in the series. 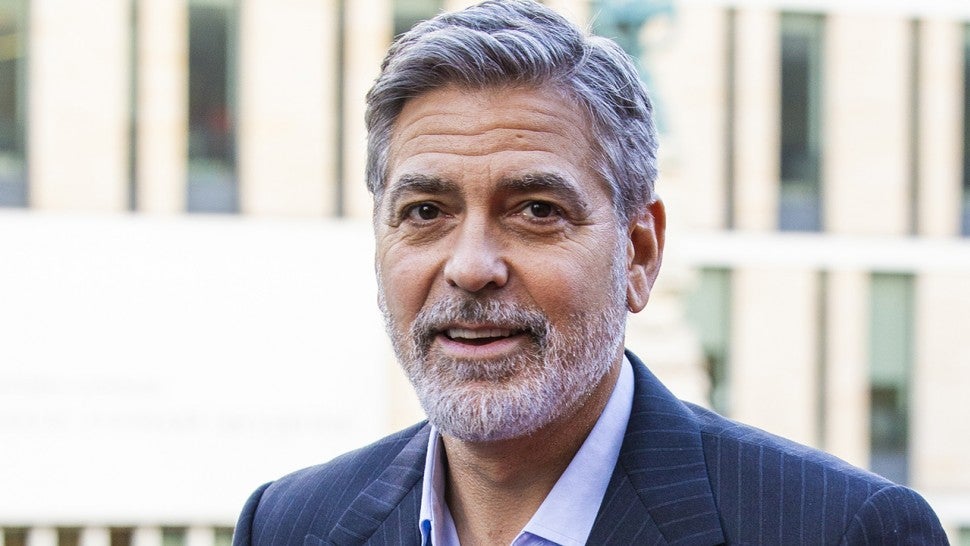 [size=9]Duncan McGlynn/Getty Images
Like father, like twins!
George Clooney, along with Christopher Abbott and Kyle Chandler, stopped by the Today show to discuss their new Hulu miniseries Catch-22, where the leading man revealed that his kids, Ella and Alexander, are already taking after their dear old dad when it comes to getting up to shenanigans!

"They're not terrible twos. They're good kids. They're happy kids. They laugh a lot. They do pranks already," the 58-year-old actor shared. "Put peanut butter on their shoes so that it looks like poo-poo on their shoes and stuff, and they think that's funny."
"They really come out with the personalities that they're born with," he added. "They're just completely different personalities and they're fun and smart, and, I mean, they already can -- you know, do all their ABCs in Italian and in English and I can't do that in English."

While on hand, Clooney also offered an update on how his wife, Amal Clooney, a renowned human rights attorney, is doing.
"She's, you know, she's taking ISIS to court for the first time anybody's taking ISIS to court," he explained. "She's working on trying to get the Reuters journalists out of Myanmar. She's doing all that and she's also an incredible mom. Like, an incredible mom. And a pretty great wife too. So I feel like I hit the jackpot."

In summer of 2018, Clooney spoke with ET about embracing fatherhood and celebrating his kiddos' first birthday, which they understandably slept through.
"Yesterday was their birthday. They are one year," George joked at the American Film Institute's 46th Life Achievement Award Gala Tribute. "They were kind of on Europe time, so they were sleeping during most of the day. We had a cake, [we were] waiting, and we wake them up and show it to them, and then they go back to sleep."
And last Halloween, while attending the second Casamigos Halloween party in a row, he chatted about why he'd missed the previous night with a fatherly anecdote.
"Last night, [Casamigos co-founder Rande Gerber and wife Cindy Crawford] were dressed up as rock stars, and I was dressed up as a guy cleaning crap out of a baby's diaper," Clooney joked to ET. "It was a fantastic costume. Oh, so much fun, you could imagine the fun I had last night."
Catch-22 arrives on Hulu on May 17.[/size]

Today's interview are always terribile. The question are embarrassing. Abbot got asked the same questions three times in a row.