George in Ireland this weekend

George in Ireland this weekend 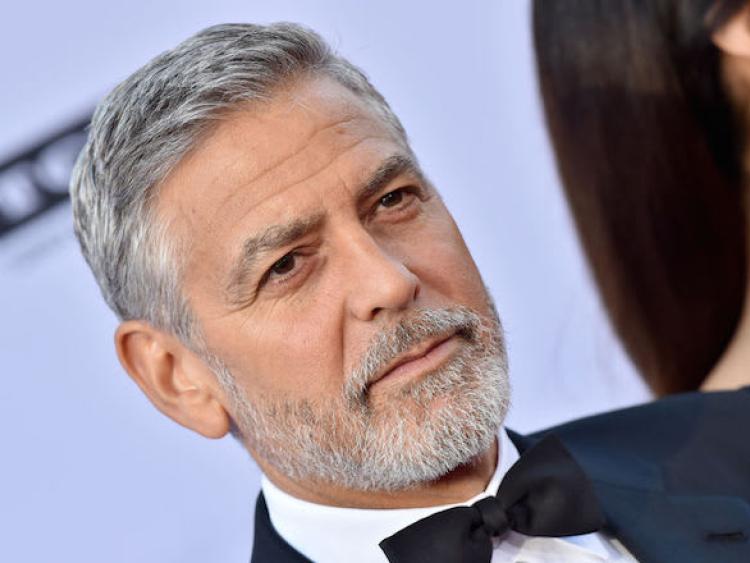 [size=16][size=16]George Clooney is in Laois this weekend.
The actor is on his first visit to Ireland and is understood to be visiting relations.
Abbeyleix man, Andy Ring, the owner of irishheritagetowns.com met with the actor at Ballyfin on Saturday and posted this pic on Facebook.
"The first thing he said when he arrived at Ballyfin House was: 'The Irish Clooneys are doing okay', he’s an absolute Gentleman!!," Andy told the Leinster Express. 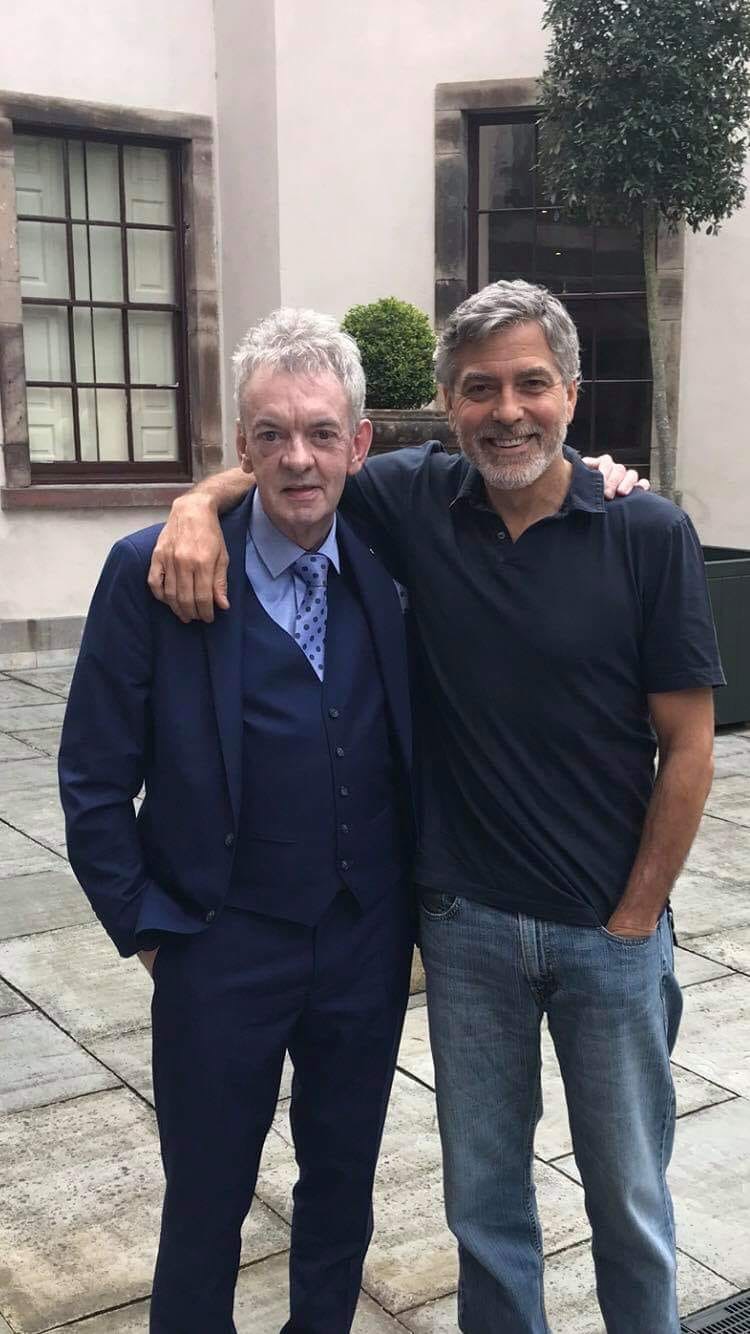 Couple stayed at Ballyfin House for family get together

about an hour ago
Sarah Slater 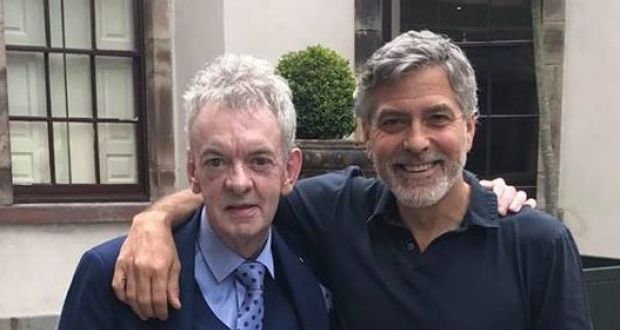 
The Hollywood actor George Clooney, his wife Amal and two children have spent a number of days in Co Laois getting to know his Irish relatives.
They attended a planned family get together which was organised by his parents renowned broadcaster Nicholas (85) and his writer wife Nina (80) who arrived from the US a few days ago.
The couple hosted the family reunion at the five star award winning luxury hotel Ballyfin House in Co Laois. 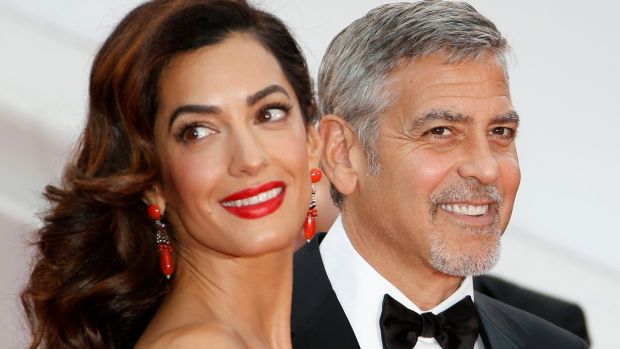 US actor George Clooney and wife, his human rights lawyer Amal Clooney enjoyed a short break for Easter in Co Laois with their family. File photograph: EPA
It was the actor’s first trip to Ireland and he left the country again along with his family on Sunday morning by private jet following their short break.
Andy Ring, a distant cousin of Clooney’s and the owner of irishheritagetowns.com met the actor at Ballyfin. “The first thing he said when he arrived at Ballyfin House was, ‘The Irish Clooneys are doing okay’, he’s an absolute gentleman.”
Another relative of the Clooneys said: “The family have been talking about this get together and I know some of the Irish cousins have been excited about it. They all had a great time.
“He loved the Abbeyleix tourism and marketing website which is run by another cousin and the ballad group Abbeyfolk, who penned the song, Here’s to you George Clooney. He is hoping to bring the group to the States.”
In 2005 an American genealogist discovered George Clooney’s Irish roots in Windgap, Co Kilkenny and Abbeyleix, Co Laois resulting in his parents visiting 12 years ago.
The Clooneys have Irish heritage on both sides of the family, though most significantly on the paternal side.
His father’s great-great-grandfather Nicholas Clooney, emigrated to Kentuckyin the US during the Great Famine of 1847.

Clooney has previously spoken about the intolerance his Irish ancestors experienced in the US when emigrating. He said: “I am of Irish descent and in America a hundred years ago we were refugees, my family. Irish people were treated terribly for a period of time and were not treated well. George Clooney and his wife Amal Alamuddin jetted in to Ireland this weekend and are enjoying a secret romantic Easter break on the exclusive Ballyfin Demesne estate, the Sunday Independent can reveal.

The A-list couple caused a stir among delighted guests yesterday when they quietly checked into the five-star country house in Co Laois.
Recently named the best hotel in the world by Condé Nast magazine, Ballyfin previously hosted honeymooners Kanye West and Kim Kardashian in 2016.
Clooney, whose ancestral home is Windgap, Co Kilkenny, was said to have been delighted at finally reconnecting with his Abbeyleix relatives yesterday, thanks to local man Andy Ring. [size=18]88Amal and George Clooney (Chris Radburn/PA)[/size]
The location was chosen as it is remote and far from prying eyes.
Andy Ring, a cousin of Clooney’s and the owner of irishheritagetowns.com met with the actor at Ballyfin. “The first thing he said when he arrived at Ballyfin House was, 'The Irish Clooneys are doing okay', he’s an absolute gentleman.’
The Hollywood actor, who has previously spoken of his friendship with Bono, was seeing having dinner in Dublin's Coppinger Row last night joined by the U2 front man and his good pal and artist, Guggi.
He dined with his high-flying wife international human rights lawyer Amal (41) with Bono and Guggi undisturbed in the popular Mediterranean restaurant only spotted by some eagle-eyed diners - going unrecognised by others as he had grown out his beard.
Set in the foothills of the Slieve Bloom mountains outside Portlaoise, Ballyfin opened as a country house hotel with just 20 bedrooms after eight years of renovations in 2011.
The Regency mansion stands in 614 acres of secluded gardens where the couple can stroll, horse ride, enjoy coarse fishing on the lake or archery and falconry.
The luxurious hideaway has won numerous awards and Condé Nast readers gave it a score of 99.11.
Each of the suites, including Lady Caroline Coote's four-poster canopy bed, has been individually designed to mirror the unique style of the original house. Wines are carefully selected from 12 vineyards established by Irish exiles - known, inevitably, as the Wine geese.
This weekend calls to Ballyfin Demesne went unreturned.

He finally put on a little bit of weight. He looks great.

So guess who was there last month - and only half an hour down the road?

PAN,
he posted this tweet on St. Patricks Day and talked about his visit back in 2011. But I love the comments on his tweet...