Well, I doubt this 'flood' of George's house was that much of a disaster . . . 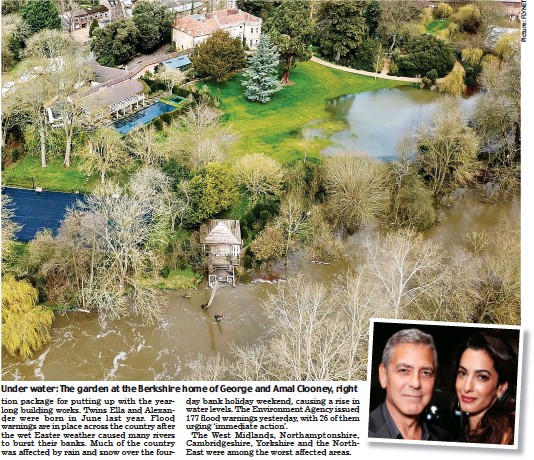 Under water: The garden at the Berkshire home of George and Amal Clooney, right
BEFORE the arrival of their twins, George and Amal Clooney spent £ 12.5million upgrading their Thames- side mansion – including £50,000 for flood defences.
Now, however, they may be wishing they had spent rather more after the Berkshire property suffered its second major flooding in two years, thanks to the Easter downpours.
Aerial photographs show how the swollen river burst its banks and flowed into the extensive gardens of their luxury home.
Luckily for Clooney, 56, and 40-year- old Amal, a human rights lawyer, the dirty brown water stopped short of the Grade II-listed building and their recently built outdoor swimming pool complex.
The garden of the property in Sonning was also deluged in 2016. Flooding can be a frequent problem in the area, where a number of celebrities have their homes.
The Clooneys bought their mansion in 2014 for £ 7.5million, and went on to spend £12.5million having it renovated and secured before their children were born.
The Hollywood actor and his wife famously gave their neighbours a £45,000 compensation package for putting up with the yearlong building works. Twins Ella and Alexander were born in June last year. Flood warnings are in place across the country after the wet Easter weather caused many rivers to burst their banks. Much of the country was affected by rain and snow over the fourday bank holiday weekend, causing a rise in water levels. The Environment Agency issued 177 flood warnings yesterday, with 26 of them urging ‘immediate action’. The West Midlands, Northamptonshire, Cambridgeshire, Yorkshire and the NorthEast were among the worst affected areas.

It didn't even reach the house any thing for a headline.

Too close for comfort, IMO. Their flood protection measures need an upgrade.

They can only do so much , the counsel or whomever has to agree to what they come up with.