» First Look at The Tender Bar - and dates for launch

» George Clooney Asks Jada Pinkett Smith 'How Do You Put Up with Will?' in Funny 50th Birthday Message

Not talking about Spacey. Answering Donnamarie's comments about Twits who tweet ignorant garbage because they have nothing else in their lives.

I’m not giving Spacey a pass by any means.  But too many people act self-righteous in condemning people and spew a lot of crap while trying to make their point.  Yes, Spacey did something despicable.   And he admitted it.  Doesn’t get him off the hook.  And it shouldn’t.  But bottomline I think these tweeters just like to hear themselves talk and say outrageous stuff to get attention themselves.

I point this out because of all the s**t I read about George when the ER actress accused him and the other actors of harassing her with little to no evidence.  Nothing to back up her statements yet people just trashed George.

I don’t use Twitter.  I don’t appreciate it as many others do.

BTW Netflix just pulled ‘House of Cards’ from its lineup next year because of the obvious. I think that’s a good move on their part.

I think there might be something else going on in all the sleaze now - and that is the opportunity for every and anybody to get on the publicity bandwagon for their own few column inches of fame or to reignite their careers. And I'm not talking about assault.........

I'm pretty sure most of us have had to say 'knock it off' to someone during our careers, but it certainly didn't mean that it went any further and that you didn't have control of the situation..........

PAN- I don't know anyone who hasn't had to deal with at least one jerk.

I'm sure there are some women who are seizing the opportunity to get attention. It's relatively safe to say you were abused by someone when dozens - or hundreds - of women are making the same claim. Maybe there was a minor incident you are exaggerating. Chances are you won't have to embarrass yourself in public by discussing the circumstances of the abuse if you are one of many.

The important thing is that the women who really were abused get justice and the men who abused them are stopped.

[size=34]EXCLUSIVE: Spin City actor Richard Kind is concerned that some women tweeting '#MeToo' and accusing Harvey Weinstein and other predators of sexual assault could be using it for 'their own aggrandizement' and 'fame'
[/size]

Hollywood actor Richard Kind says he fears a myriad of leading ladies could be falsely claiming they were abused by Harvey Weinstein and other sexual predators in a bid to boost their careers.
In an extraordinary rant, the accomplished stage and screen star spoke of his concern that some actresses may fake sexual allegations in a bid to garner publicity or for their own 'aggrandizement'.
Kind's comments came as he spoke passionately about how the Weinstein controversy would alter not only the US entertainment industry, but many businesses nationwide.
The 60-year-old - who is best friend's with actor George Clooney who has been equally vocal on the subject - fears that some women who use the social media hashtag 'MeToo' to highlight inappropriate behavior, actually want to boost their own 'fame'.
The #MeToo trend has included dozens of women, actresses and otherwise, who have claimed to have been sexually assaulted or raped by Weinstein and others in the film industry and elsewhere.
Scroll down for video 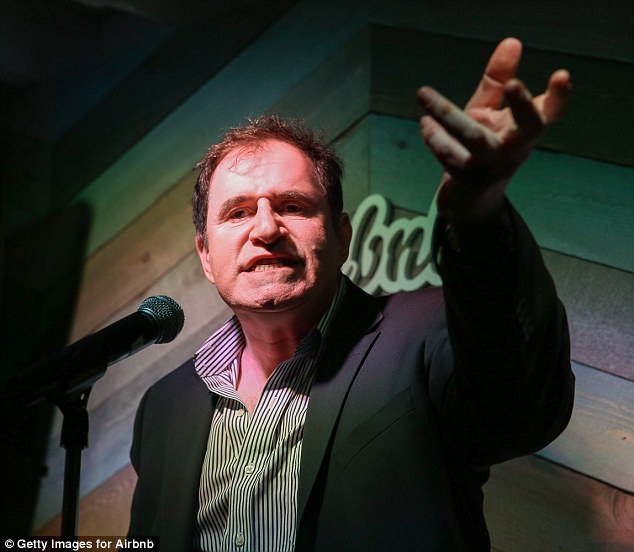 Spin City star Kind told DailyMailTV: 'Rarely does what happen in Hollywood change anything, but this will; not because of Harvey; because some of the princesses of this town - the Angelina Jolies and Rose McGowans - they became human; they became victims, just like the poor kid, oh my gosh. It has equalized them.
'And I think that it is pretty great that nobody is immune no matter how big you are.
'It is what has happened. It has been happening for decades and decades and decades.'
Asked why nothing had been said publicly for three decades about Weinstein's behavior by Hollywood stars, Kind responded: 'It is terrible to say and I hate the word, but rape victims who are put on trial and who have to testify against somebody and they wipe the floor with them.
'They call these women liars, or they say "you are exaggerating or you are looking for money". Now we know that happens.
'But I will tell you it is also going to turn the other way where women who weren't really abused or really didn't get it, are looking for fame or saying 'me too'. I hope that doesn't happen - it could.'
Kind spoke as he walked the red carpet of the 3rd Annual Carney Awards on Sunday, where he was honored for his long term work. 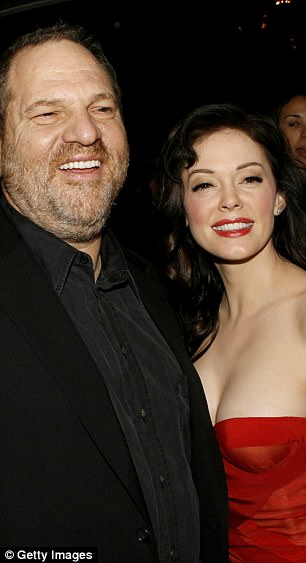 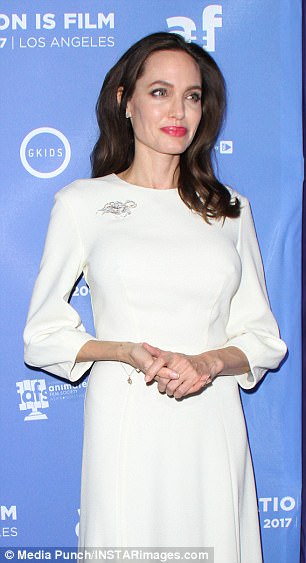 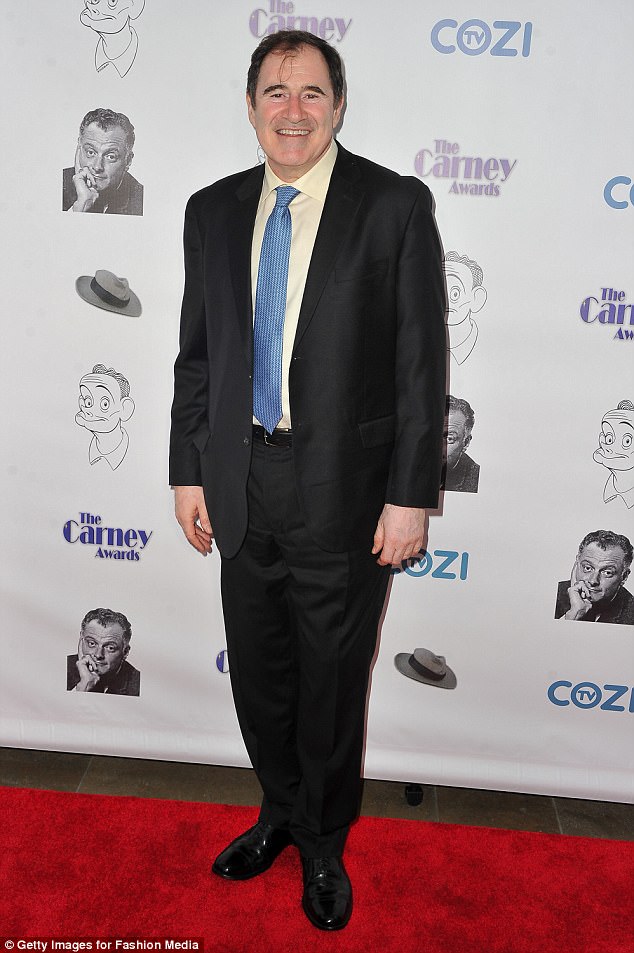 
Kind spoke as he walked the red carpet of the 3rd Annual Carney Awards on Sunday, where he was honored for his long term work
The married father-of-three himself raised the subject of Weinstein after insisting how his negative views of Donald Trump and many other A-listers had no impact on the voting US public.
He felt that the Weinstein exposé, which has seen over 60 women publicly claim to have been abused or raped by the movie mogul, will impact America much more.
When challenged about his comments, and asked if he really believed some actresses would seek out 'infamy'.
He replied: 'Yeah,' adding: 'Look I better not get into it.'
He continued: 'But I just hope that doesn't happen. I hope people don't use it for their own aggrandizement, and to lift themselves.
'But I think in the work place in America it is gonna stop or it will have an effect on it, I pray.'
Last year Kind made headlines when impersonating Donald Trump at the 16th Annual Les Girls Cabaret in Los Angeles.
While he spoke of his concern of Trump running for office, Kind admitted at the Carney event: 'Politically, it did nothing.
'One more example that art does not change our lives. It enhances it and it may entertain us.
'I will tell you what has. And I hate to bring it it up. The whole thing with Harvey Weinstein is despicable.
'He deserves his punishment. What I really hope is that the bank president in Omaha, who used to hit on the new business school graduate that was pretty and in order for her to rise to the top he took advantage of her. That is all going to stop. 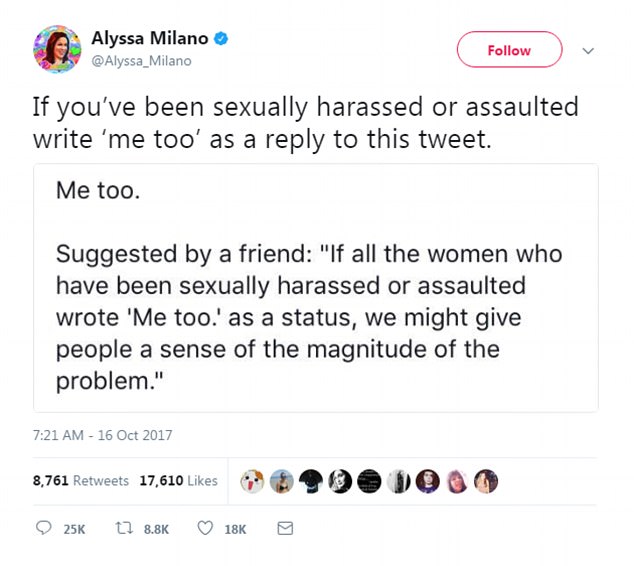 
Actress and co-star of Rose McGowan, Alyssa Milano sparked the viral campaign earlier this month urging people to reply to her on Twitter with 'me too' if they had ever been sexually harassed or assaulted 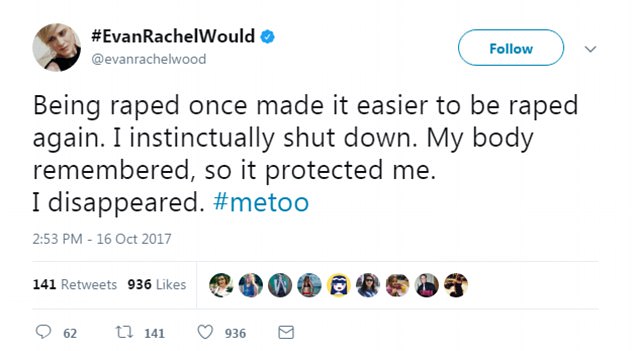 
'We all knew about that in Hollywood, and not just Harvey, it goes back to Louis B Mayer and all of those guys. Now it is going to draw attention to sexual abuse in the work place, and in everybody's work place and I think that is great.'
The 'MeToo' hashtag was started by actress Alyssa Milano, who wanted to show support for friend McGowan.
Kind boasts an extraordinary three-decade career on stage and screen featuring in over 200 productions.
He is regarded as one of the best character actors in the business, having featured in major roles in hits like Gotham, Curb Your Enthusiasm, Spin City, and Mad About You.
He starred in Ben Affleck's 2013 Best Picture Academy Award-winning Argo and has voiced characters in A Bug's Life, Cars and Inside Out.

His stage career has seen him star in the smash hit Broadway musical The Producers, The Tale of the Allergist's Wife, Candide, and Bounce.

Kind was celebrated at the 3rd-Annual Carney Awards alongside Honoring William H. Macy, Wendie Malick, William Fichtner, and Xander Berkeley at the Broad Stage in Santa Monica.
Now in its third year, The Carney Awards honors Hollywood’s leading character actors each year for their outstanding achievements in character acting.
Reflecting on his career and honor, Kind added: 'I like the fact it is recognition. Our five names will be added to the previous names. I see this as a Hall Of Fame.
'When I was a kid all I wanted was awards, now all I want is a job, I want to work. This is a collective of people saying you were good. I like what you did.'