George and Amal and party at Da Ivo Venice tonight

George and Amal and party at Da Ivo Venice tonight

They are currently in Italy for the 74th annual Venice Film Festival.
And proving the event to be a glamorous affair, Amal Clooney, 39, looked sensational as she stepped out to support her actor husband George, 56, on Friday.
The mother-of-two who has been showcasing her incredible post-baby frame, after giving birth just three months ago in June, dazzled in a glittering royal blue bandeau dress.
Scroll down for video 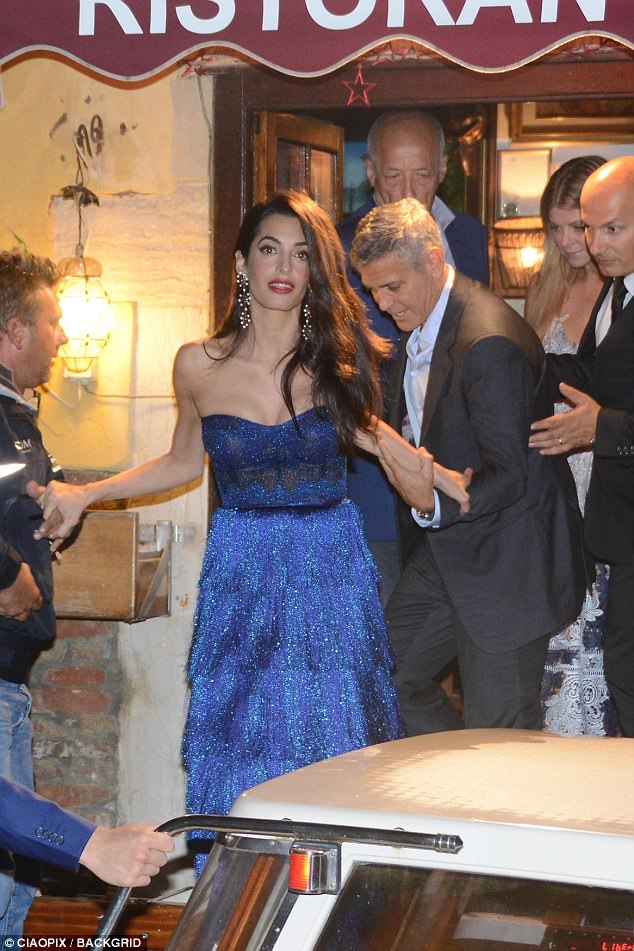 
Beautiful: Amal Clooney, 39, put on a stunning display as she enjoyed dinner with husband George, 56, in Venice, Italy on Friday evening
Amal's stunning frock was certain to turn heads as she made her exit from Ristorante Da Ivo in the Italian city - where she and George had previously wed in 2014 - after dining with her beau and his A-list pals, Matt Damon and his wife Luciana Barroso.

It also boasted a layered frilled skirt that reached down to the starlet's feet, with Amal adding height to her ensemble in a stylish pair of bronze cut-out heels.
She accessorised with a pair of jewelled statement earrings, sweeping her long glossy locks over to one side while ensuring to keep them on show.
Her tresses were styled into soft glamorous waves and Amal completed her evening look with a slick of bold red lipstick across her lips. 
All eyes on her: The Oceans Eleven star appeared to be overshadowed by his elegant wife who stole the show in a head-turning glittering blue bandeau dress
The barrister appeared in high spirits as she headed home with her Ocean Elevens star spouse, with a suit-clad George making sure to clutch onto his wife's arm to aid her exit.
Their appearance together in Venice comes as George is busy preparing for the October premiere of his new thriller Suburbicon which he is directing, which stars Julianne Moore, Matt Damon and Oscar Isaac.
Suburbicon peers into the dark racial tensions of 1950s suburbia, which the actor believes is deeply relevant to Donald Trump's America.
Referencing his new role as a father to his twins, George joked that he was dusting off his tux as he told Associated Press: 'I just have to clean the barf off of my tux. It used to be my barf but now it's the twins' barf. So it all works out.'
George addressed the life-changing three months he has had since welcoming his brood, as he added: 'Right now my job is changing diapers and walking them around a little bit. I really didn't think at 56 that I would be the parent of twins.
'Don't make plans. You always have to just enjoy the ride!' 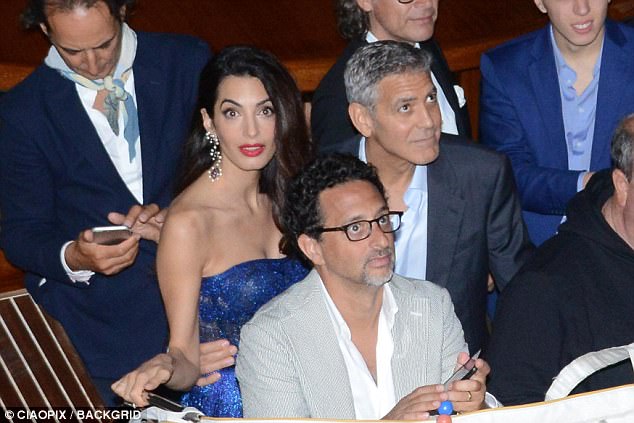 
Star-studded: The couple had enjoyed dinner at Ristorante Da Ivo in the Italian city, alongside Matt Damon and his wife Luciana Barroso 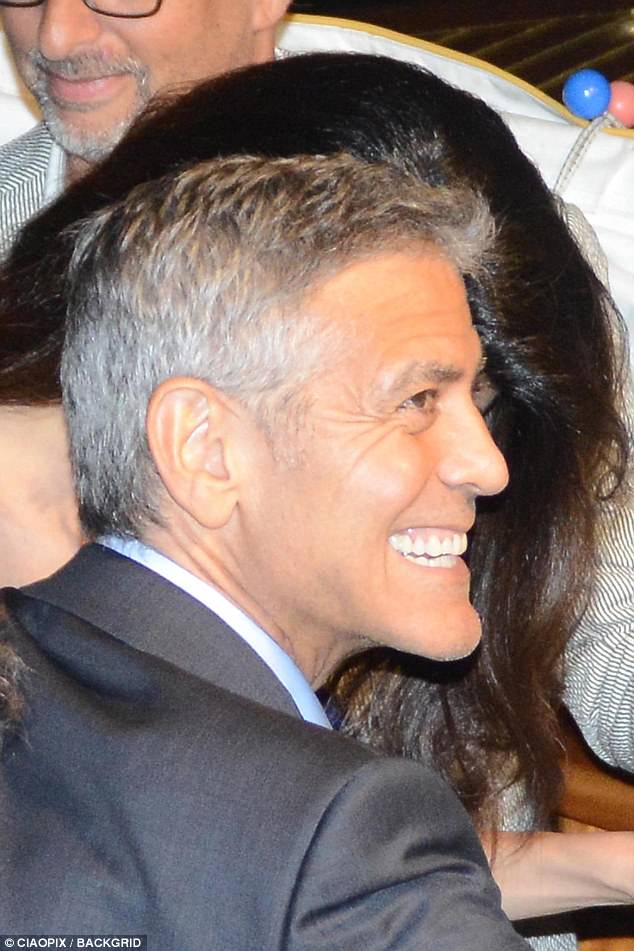 
High spirits! George was seen beaming from ear-to-ear as he took in the festivities with his wife by his side
'Suddenly, you're responsible for other people, which is terrifying,' he claimed, before crediting Amal for her skills as a mother, as he added: 'She's like an Olympic athlete, she's doing so beautifully.'
The Berkshire-based couple had welcomed their twins; daughter Ella and son Alexander in June, with Amal giving birth at London's Chelsea and Westminster Hospital.
Confirming the news in an official statement, a spokesperson for the couple announced: 'This morning Amal and George welcomed Ella and Alexander Clooney into their lives. Ella, Alexander and Amal are all healthy, happy and doing fine.'
The announcement ended with the quip: 'George is sedated and should recover in a few days.' 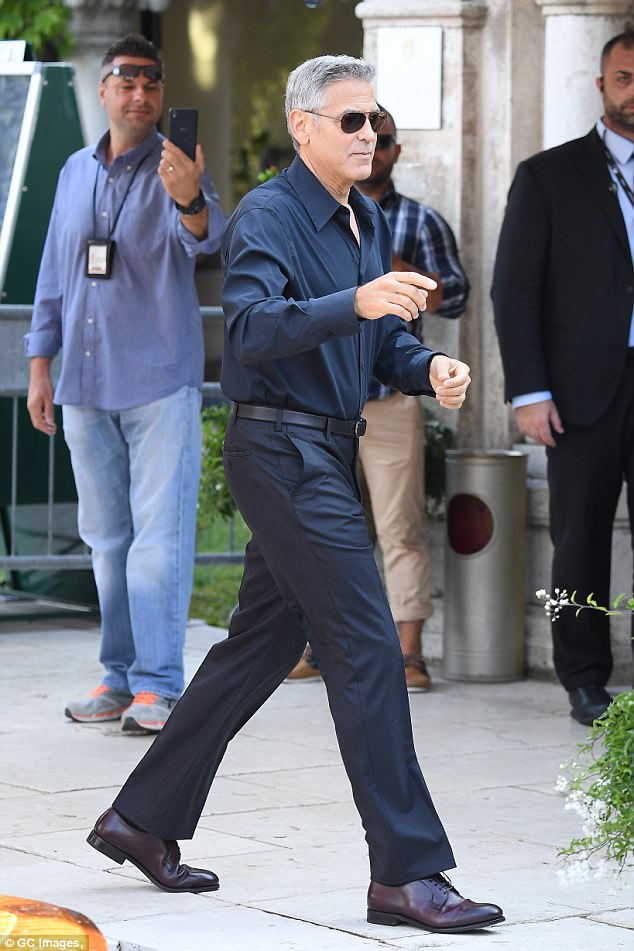 
Making his mark: The morning after his lavish dinner, George was seen turning heads as he attended the events of the 75th annual Venice Film Festival 
In demand: He was seen stopping for fans to sign autographs while arriving at the Excelsior Hotel on Saturday 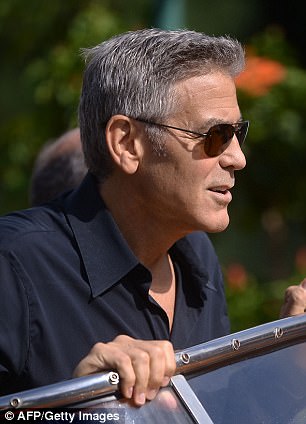 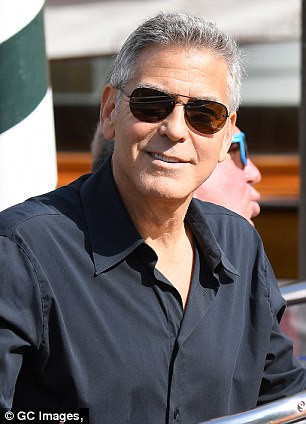 Arriving in style: The movie talent was seen heading to the hotel in a water taxi 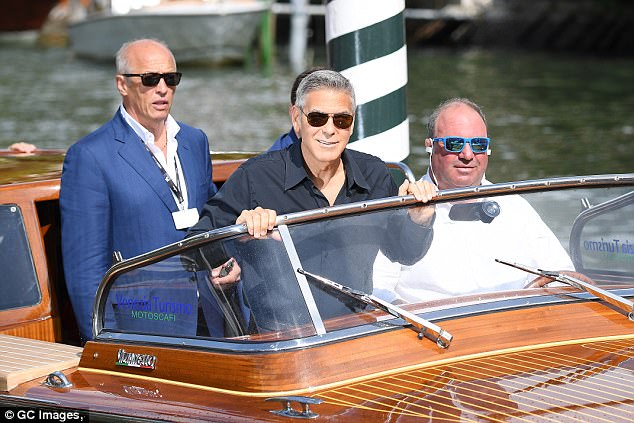 
Centre stage: He was without wife Amal as he headed out in Venice
George and Amal are believed to have paid up to £8,520 ($11,000) for a private suite in the Kensington Wing according to a Tuesday report from the Daily Mirror.
Nick Clooney, George's father, gushed to Entertainment Tonight following the twins' birth that his grandchildren were 'wonderful'.
He joked: 'I was explaining to George on this holiday thing, that Father's Day is pretty much of a minor league holiday and he is going to have to get used to that.
'As long as he didn't get the stretch marks, he doesn't get the adulation - Mother's Day is a big deal, Father's Day is just a supporting character.' 
A-lister outing: The married couple are currently taking a break from parenting duties during their trip to the Italian City, where they had wed three years ago 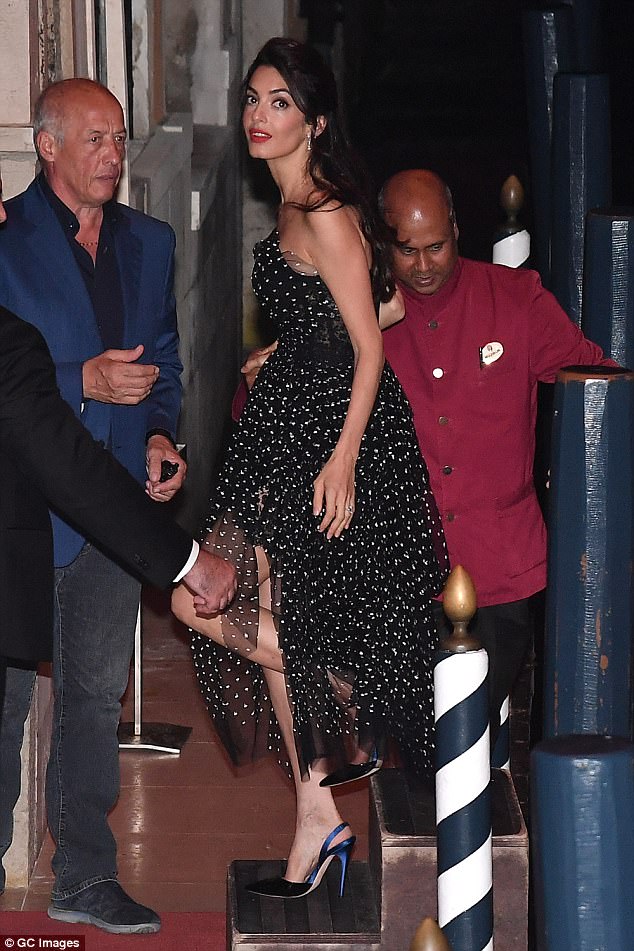 
Besotted: George has been speaking about his experience of fatherhood so far at the annual event and credited Amal's 'beautiful' skills as a mother, branding her an 'Olympic athlete'

Amal's mother, Baria Alamuddin, meanwhile, had told People that meeting her grandchildren for the first time had been a 'beautiful feeling'.
She recalled: 'Seeing these two angels, these stunningly beautiful babies…cuddled together, and seeing the joy on Amal and George’s faces, it’s one of those deeply felt beautiful feelings you can’t express in words.'
Baria, who was at the twins' delivery, added: 'Oh my god, Amal and George were so beautiful, they were so happy, so contented.' 
Proud parents: The Berkshire-based couple had welcomed their twins; daughter Ella and son Alexander in June, with Amal giving birth at London's Chelsea and Westminster Hospital


George had married Amal, née Alamuddin, back in September 2014, in Venice, after meeting at a charity fundraiser the previous year.
Prior to tying the knot with Amal, George had spent 1989 until 1993 married to actress Talia Balsam.
He has previously dated the likes of Lisa Snowdon, Italian actress Elisabetta Canalis, Renée Zellweger and Krista Allen. 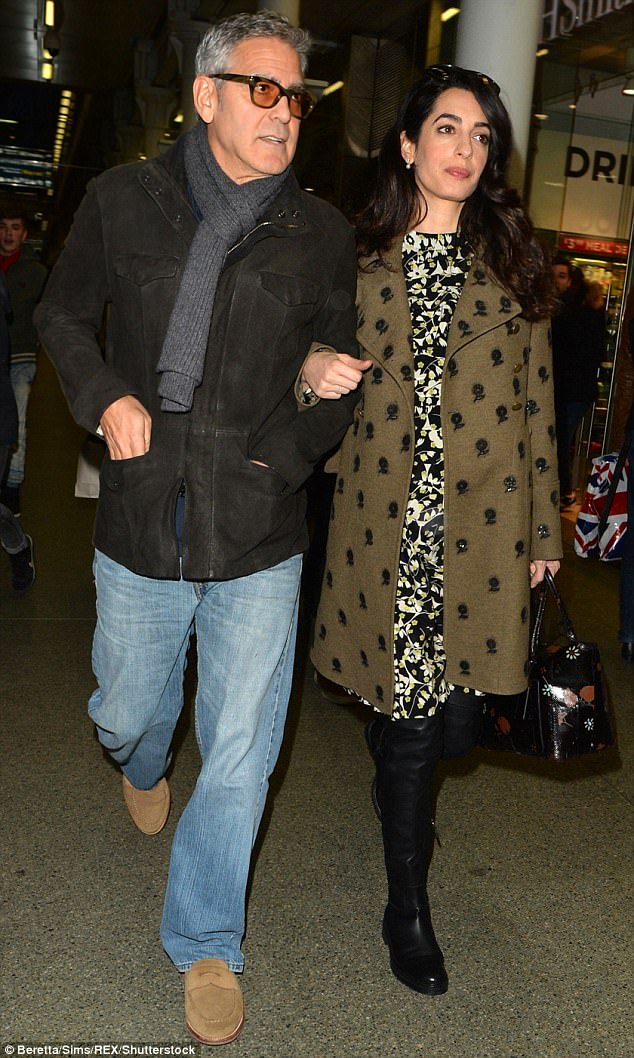 
In love: George had married Amal, née Alamuddin, back in September 2014, in Venice, after meeting at a charity fundraiser the previous year