What a really nice article.

Thanks PAN.  This was a super enjoyable read!

Thanks PAN,
something nice to read before I'm off to work. I'm just a bit confused about the upcoming movie they mentioned. They called it 'Rubicon' but wasn't it 'Suburbicon? Or did they change the title? Or is it another project? Or did they simply not check the facts?

And here's the article:

George Clooney opens up about his marriage to Amal 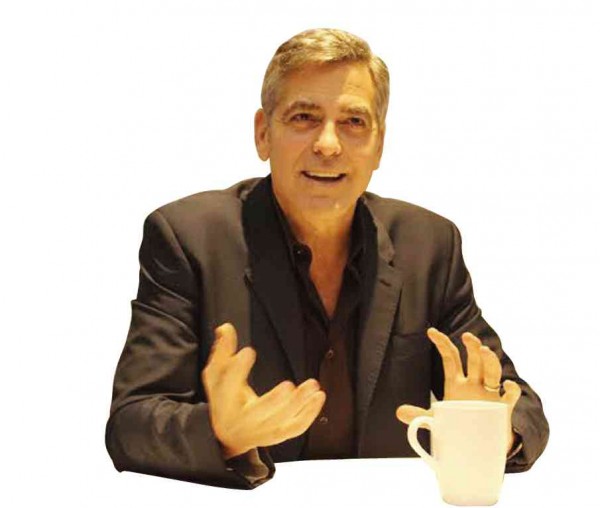 IN “HAIL, Caesar!,” George plays Baird Whitlock, an actor shooting one of those swords and sandals epics popular in the 1950s. RUBEN V. NEPALES

LOS ANGELES—“I am getting divorced now, am I?” George Clooney joked straight away about tabloids’ favorite headlines regarding him and his wife, Amal Clooney, these days. The actor was his usual fun, engaging self in our recent chat in LA. “And no, she’s not pregnant.”

George was touting his new film, “Hail, Caesar!”—Joel and Ethan Coen’s comedy set in 1950s Hollywood, so the talk veered toward old Tinseltown. George is the nephew of singer-actress Rosemary Clooney, who was married to actor Jose Ferrer, so he got to experience parties with them and other stars, including Gregory Peck.

Asked if he and Amal, a noted lawyer and human rights activist, throw similar star-studded bashes in their homes in LA, England and Italy, George answered, “No, not so much. It’s not with a lot of famous people. It ends up being with a lot of politicians.

“My wife just got (former Maldivian) President Mohamed Nasheed released from solitary confinement. He was jailed for political reasons. They released him (temporarily—for 30 days) for medical reasons. So, two nights ago at our house in England, we had President Nasheed over to say, ‘Hello.’ It’s less about stars and more about some of the people whom she and I are working with in other parts of our lives.”

The Oscar and Golden Globe winner, who married Amal in September 2014, said that he’s still an early morning riser. “I wake up around 7,” he said about his daily routine. “I make myself coffee. We are spending our lives in different places now. We spend a little time in LA, England and Italy.

“England is where I can do a lot of writing, work and focus on the humanitarian stuff I’m working on. I am about to direct a film (‘Rubicon,’ with Matt Damon, Josh Brolin and Julianne Moore) in Los Angeles; I can work on prep and do all that stuff, too.

“I am pretty regimented on how I do things. I like to get up in the morning and work out. There are certain things I like to do, and when they’re disrupted, I get a little off-kilter.  Amal finds it easier in some ways to work out of Los Angeles because when we’re in England, she has friends and family she has to visit. She can isolate herself more here.

On their house in the UK, which they bought after their wedding, George said, “The house we have in England was built in 1680, so it’s old.  And we decorate it accordingly.” He cracked, “We have a trapeze and all the important things you need in a house from 1680.”


Sorry, tabloids, George and Amal don’t seem to be splitting anytime soon. He credited one of the reasons for their successful union, so far: “For Amal and me, probably number one in our relationship is her sense of humor. She does serious things and works on very serious subjects. But she is also one of the funnier people you will ever meet. She has a great sense of humor.”

He stressed, “I don’t think anybody would want to have anyone who doesn’t have a sense of humor … If you don’t have a sense of humor and self-deprecation about how you are perceived, what your life is, all of the mistakes you have made, and the good things you’ve done, then you aren’t going to enjoy anything because you will be constantly guarding this thing that you’re so afraid might be exposed.

In “Hail, Caesar!,” George plays Baird Whitlock, an actor shooting one of those swords and sandals epics popular in the 1950s. He said Baird was inspired by the late actor, Victor Mature, and his perpetually “jet black hair,” who was also from Kentucky like George.

Teased about his one and only costume throughout the film-within-a-film—a toga that bares his nice legs—George, whose Roman soldier also sports curly hair, laughed and shot back, “It was a nice skirt, wasn’t it?”

On whether Amal, noted for her sartorial elegance, gives him fashion advice, George quipped, referring to his toga, “Yes, she told me to wear leather.  She said it’s ‘in’ in 2016.”

Then, he said, “I think Amal would proudly say she had nothing to do with my fashion sense in this film.

“It’s a funny thing when you get fitted for this outfit. I have had this a few times in my life where you are putting on an outfit and you go, this could be the one that actually finally ends my career. Joel and Ethan would come into the wardrobe fitting and just start laughing!” 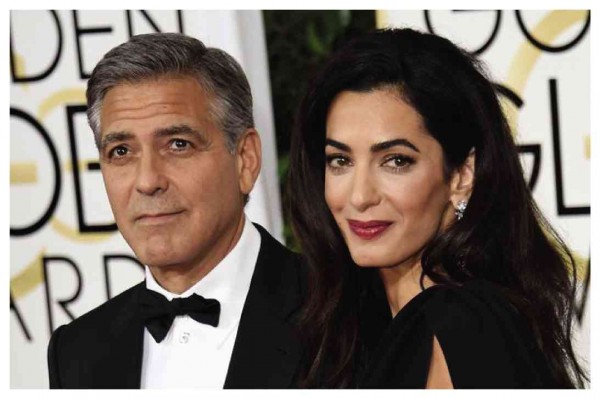 George repeated that his fashionista wife has not commented on his wardrobe. “She’s never said anything,” he said. “I would imagine that it will be horrifying that I am still wearing some of the suits that I have always worn. It’s a very difficult thing when you are a woman trying to get ready for a ceremony. It has to be a dress that nobody else has worn and one that you like. And you have to go through hair and makeup … while I am playing basketball for a half hour until we have to go.

“So, it’s not fair. Her sense of style is all her own. Happily, we don’t cross paths on that.”

On those Hollywood parties and stories that he got to experience when he moved from Kentucky to LA, George said with a grin, “Well, I know some really filthy stories from Jose Ferrer, which I won’t tell you.”

As for the parties, George recalled, “Mostly it was their (Rosemary and Jose’s) house on Roxbury Drive (Beverly Hills), which was party central. Also Gregory Peck’s house and other people who had the big parties, and everyone would go to visit.

“I used to go to Gregory Peck’s house to party with him and Veronique (Gregory’s wife) and Jack Lemmon playing on the piano and creating that very fun, exciting thing.

“My aunt Rosemary’s house was like that for a long time. She and Jose would throw those parties. It was all these great stars. My father (Nick, who was Rosemary’s brother), at 20 years old, moved to Hollywood to live with my aunt Rosemary.

“He spent the night drinking with Marlene Dietrich and that was a pretty fun story. That’s all the story I got out of it, but it was a great story.

“I romanticize it probably more than it needs be. But I like the idea of old Hollywood. I like it when pictures were pictures, and they were big. I like the glamour of it and how the simplicity of it looked, understanding all these other complexities, which I am not even addressing.

“But Rosemary’s experience in Hollywood was very different because she was a singer, primarily. So her experience was mostly through her husband at the time, Jose Ferrer.”

He offered an anecdote: “I remember the first play I did. Jose Ferrer’s son, Miguel Ferrer, directed it. That was my first acting gig. It was in Hollywood, and it was a play called ‘The Biz,’ which was about show business. Jose came to see it. He was an Oscar-winning actor.

“I went over to Jose and I was like, ‘Jose, what did you think?’ He said (imitates Jose), ‘I would say to you to keep the scenery out of your mouth. You don’t know where it’s been!’ I was like, ‘Oh, alright.’ He was hypercritical. I learned a lot of good lessons along the way.”

He added, “But those guys … it was probably a very fun time in Hollywood then. You had your Eddie Mannix (Brolin) studio fixer out there, which is a pretty amazing thing that that guy would get you (actors) out of trouble, too. We could use one of those now!”

Oh wow, that's one of the more interesting interviews I've read about him in a long time.  Love the stories about his days in Hollywood and what was going on at his aunt's house when he lived there.

Great interview! Wish it was longer...

I wish he would write a biography one day. That would be great!

Would love to hear some of those "filthy" stories.  Knowing Gregory Peck and Jack Lemmon.  So cool.  George has a lot of respect and admiration for Old Hollywood .... the  actors and the films that came out of that bygone era.

I love reading about his "routine" at home and his work. And his explanation of how Amal's sense of humor was key in his attraction to her. How important it is.  We know how self-deprecating he is and its nice to read that he feels it's a good trait for everyone to possess.

I would love for him to write an autobiography some day when he's really old.....  I don't think he will but I would love to read "his" version of his life and career.

It was a terrific interview!

I find it really interesting that it's often the case that sometimes the best interviews come out of something like a chat with the HFPA journalists (which this was) on a junket and then the other agencies pick out a snippet of it to embellish and use in interviews on another occasion.

Anyone else noticed that there's no mention of Einstein this time, even with the story of Nate out there..........?