George Clooney Is To Spend His First Wedding Anniversary Paying Tribute To His Late Friend Jerry Weintraub At The Producer's Upcoming Memorial Service.

The Hollywood veteran, who oversaw Clooney's Ocean's 11 films, died in July (15) aged 77, and on 27 September (15), Weintraub's closest friends and family will gather to remember the beloved moviemaker in a special ceremony.

Although Clooney and his human rights lawyer wife Amal will be celebrating the marriage milestone, one of the activities of the day will include attending Weintraub's memorial.

When asked what their big plans are for their anniversary, Clooney confessed to Entertainment Tonight, "Unfortunately, I have to speak at Jerry Weintraub's memorial," before joking, "This is his last producorial way of screwing me over, that on my anniversary, I have to go to his memorial."

Following the news of Weintraub's death, the Clooneys released a touching tribute to their friend in a statement which read: "In the coming days there will be tributes about our friend Jerry Weintraub. We'll laugh at his great stories, and applaud his accomplishments and in the years to come the stories and accomplishments will get better with age, just as Jerry would have wanted it. But not today. Today our friend died.

"To his family and friends, Amal and I send our love. And to those who didn't know him we send our deepest sympathy. You would have loved him." 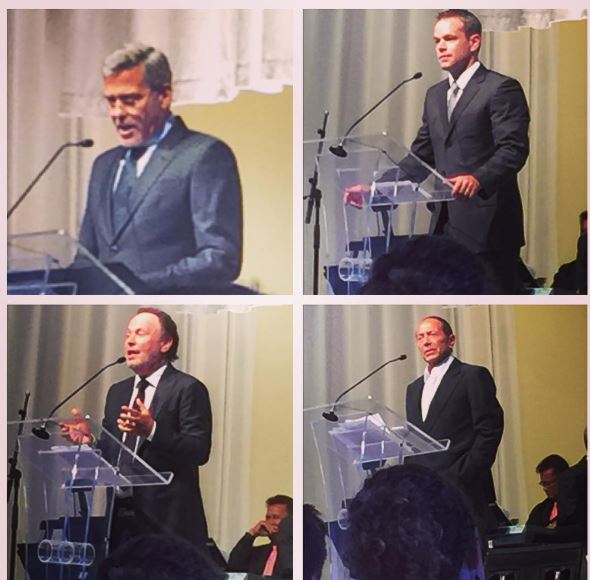 At tonight's memorial for Jerry Weintraub...George Clooney, Matt Damon, Billy Crystal & Paul Anka were among those remembering him with their talents. What a tribute to an extraordinary life. 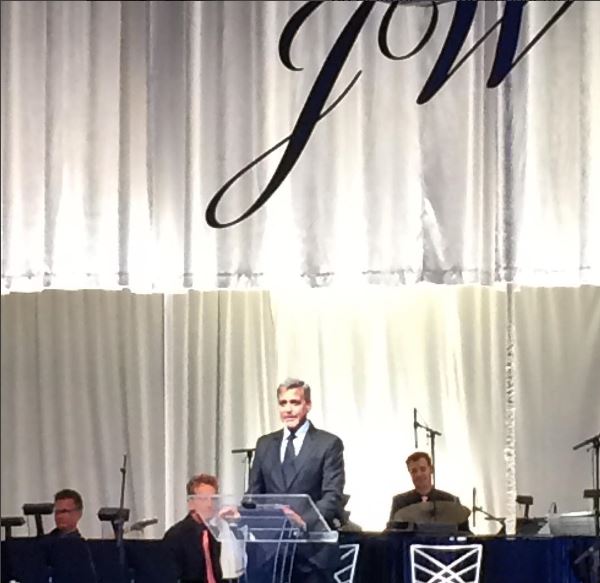 Sharon Stone, George Clooney, Matt Damon and Billy Crystal were among the bevy of attendees who arrived at Craig's restaurant in Los Angeles for a memorial dinner in honor of the late Hollywood mogul, who died in July. Among his prolific credits, Weintraub had produced Ocean's Thirteen, the Karate Kid remake and Behind the Candelabra.

Stone, who was one of the first to arrive, donned a formfitting black dress, her hair gently slicked back.

Once inside, the restaurant was transformed into an intimate setting with a cascade of white curtains and chandeliers. 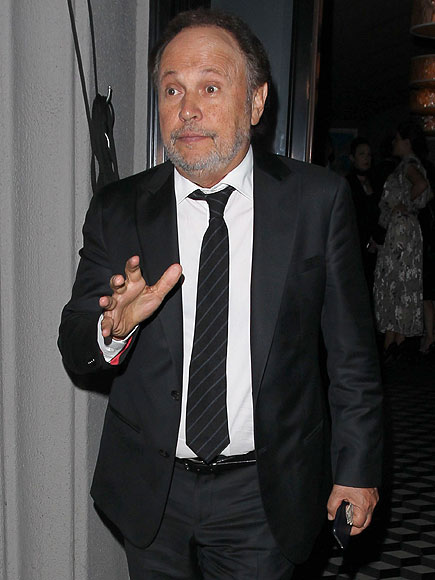 Billy Crystal
FameFlynet
Linda Thompson, a longtime friend of Weintraub's (and an ex-wife of Caitlyn Jenner), posted an Instagram photo showing off the elegantly decorated restaurant.


"Celebrating the incredible life and legacy of my long time friend and unofficial "godfather" Jerry Weintraub. Beautiful memorial," she captioned the video.

Weintraub's initials were featured around the venue as guests mingled and dined at tables covered in white tablecloths. 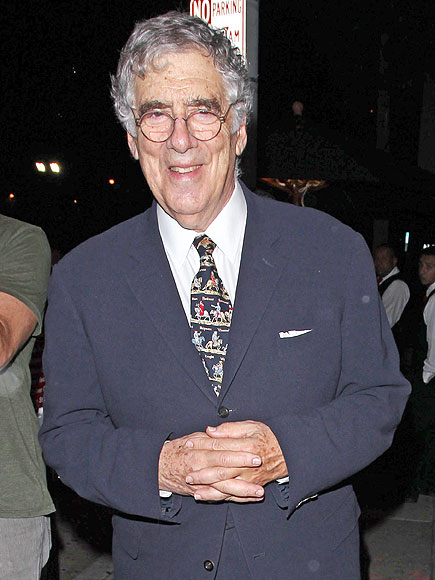 Elliott Gould
FameFlynet
Napkins printed with some of Weintraub's famous words were also placed around the restaurant: "I'm a guy who shakes your hand and will never let you down. I have a code of honor and I don't lie." 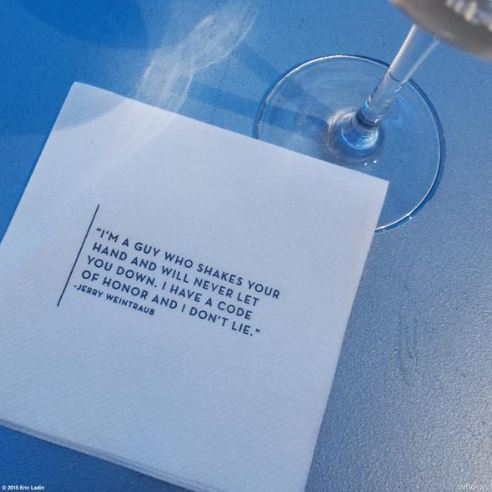 Later in the evening, some of Weintraub's closets friends and colleagues took the stage to share their memories of the talented producer.

Both Clooney and Damon – who worked with Weintraub on Ocean's Eleven – along with Crystal and Paul Anka spoke at the memorial.

"At tonight's memorial for Jerry Weintraub...George Clooney, Matt Damon, Billy Crystal & Paul Anka were among those remembering him with their talents. What a tribute to an extraordinary life," Thompson captioned a picture of the four men on stage.


The three-time Emmy winner and onetime head of United Artists studio died of a heart attack on July 6 at the age of 77. 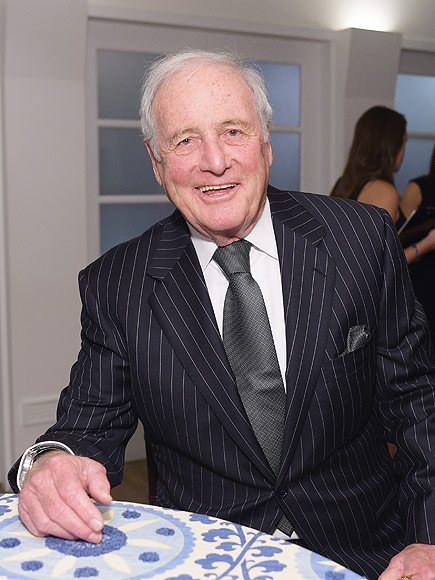 Video but George is not in it

So this was a dinner on September 27, 2015. George Clooney attended alone.... but with friends.  Other outlets are reporting it was a dinner and friends celebrated Jerry Weintraub's life until very late.

Then the other press release about dinner at Sunset Towers on same day is probably just another fake story by publicity teams with agendas. No photos?

So touching for all these people to commemorate their friend.


As George said in the past, Jerry Weintraub's Ocean's trilogy paid the bills.

The memorial and dinner were at two different places . George spoke at the memorial which was at the Ray Dolby ballroom. That is the picture we see of him speaking.

For anybody who has the latest Vanity Fair (December 2015, Bill Murray on the front), there are photos in the Fairground section - heading Around the World, One Party at a Time (love it!) - there are photos of all those at the Memorial including George and Amal

Have looked around, but only in magazine format at the mo I think....

PAN,
please don't forget us poor europeans if you find them somewhere

It's in my (UK) December copy of Vanity Fair, Carol. On all good news stands I'm sure!

Bill Murray's on the front in his Very Murray Christmas gear. Hope you find one!

Thanks PAN,
I thought you were talking about the US  Vanity Fair! So I'll try to get it in Germany. It's not so easy because I live in provincial backwater, and you usually find international magazines at airports and main stations in cities.

PAN, you can't take photos of the picture and post them on the site? Sorry to bother you.

The Vanity Fair photos of George and Amal at the event are now on the Amal Style site and their twitter page. In one they are talking to Caitlyn Jenner.

It's unclear (to me anyway!) whether they are scans, but thanks to them anyway. The Vanity Fair magazine also has a photo of George and the boys from the Oceans films...........

Thanks PAN,
I just checked Amal's styling site and found the pictures. Are there more pictures in the Vanity Fair? I still couldn't find it anywhere nearby, not even online up to now but guess it maybe available next week. It's always a bit tricky to get newspapers from other countries here. You usually have a good choice on main stations and airports, but I live a bit too far away...

Thanks pan for the info.