Don't speak Italian but something  about the police had to intervene.

And Amal's dress is a mini again.

Can't see the dress in that article but the pic is from the place in NYC.

.......and the neighbours thought they were being burgled so called 112

She likes mini dresses and she wear them , what has that got to do with the article are they discussing her dress. Can someone translate what has happened.

We need its me!

Well for all their effort the paps didn't even get any pics. Just the police.

"Paparazzi chasing Clooney are mistaken for thieves and trigger a small manhunt. It 'happened last night in Como area via Navedano, just before 23. A phone call alarmed, came to the police station, reported strange movements of two cars: the media, said a resident, were still travels back and forth a bifurcation dead-end street. It is an area full of terraced houses and residences, impossible so that the presence of the two vehicles to pass unnoticed. Within a few minutes they have received two police cars. After a first patrol agents have received a second warning: another resident, scared, said he heard a "loud thud" come from a hedge.

So the hunt is taken: the police have inspected every corner of the area looking for tracks or signs of a break-in windows and doors. Nothing done, until they noticed a man in a car. Reached, said to be a waiter at a famous restaurant in the area: "I just finished the service," he said. "By the way - he added - George Clooney is having dinner with us right now" (the Hollywood star, is known, runs every summer in Como since he bought the house at Laglio, on the lake).

So agents have reached the bodyguards of the actor and the little mystery of the nocturnal movements was unraveled. As always happens, explained the security guards, Clooney has just left home photographers - who, in search of exclusive shots, stationed permanently outside the villa of the actor - have launched pursuit.

And 'Just a quick stroll around in a patch of woods near the restaurant to track paparazzi lurking. Once achieved and identified confirmed that they have traveled the road by car several times in search of the divine. No offense and the case closed: the agents that there was nothing to do but to reassure the residents and get back to work."

Thank you  Melbert, for the translation.

Thanks, Mel! Too bad they couldn't arrest the guy for something - maybe lurking with intent?

If the paps do this all the time it's no wonder George is concerned  about disrupting his neighbors' lives. If they tried it here they'd probably get shot!

LIzzy definitely shot , it is crazy how the press act it's not like they haven's seen George out to diner a zillion times.

Sadly, Annemarie, that's not what it's about for them. It's about making a massive amount of money out of an exclusive shot they could sell to the highest bidder.

So for instance the Villa d'Este pix were bought at the highest price by in this case Yahoo, who then negotiated/leased it to programmes under their banner like Entertainment Tonight......and then gradually they went to E! and Just Jared (also owned by Yahoo? - I'm guessing), Tumblr, (which Yahoo own)

But they were probably also taken by some guy with a long lense in a tree or bush some where up a hill from Villa d'Este. And that person would have had someone else staking out possible routes where the car may go and on a wire to them

PAN, you know those pics that were taken of George and Amal in their blue outfits walking to the boat?  I would think those shots were taken in violation of the ordinance.  They just seemed too close to have been taken outside the perimeter set by the town mayor.

If the paparazzi are getting paid big bucks for anything George out and about maybe it's worth paying the fine to get those in demand pictures.  What do you think?

Thanks Pan, the pictures at dinner were so unclear the pap had to be a long way a way to take them. It seems the pictures that are being sold and bought aren't even good quality.

And 'Just a quick stroll around in a patch of woods near the restaurant to track paparazzi lurking. Once achieved and identified confirmed that they have traveled the road by car several times in search of the divine. No offense and the case closed: the agents that there was nothing to do but to reassure the residents and get back to work."
In search of the divine???????????????????

I think the shots of them in the blue with the Sagals could easily have been taken from on the lake but the required distance away. And that will happen if they use that way to travel around - obviously not bothered in this case.

As for the fines, well, that's down the Mayor of Laglio who decided to impose them whether he charges anyone or not.........a lot more police around in the summer....

I would think the police would have to catch them to fine them. If you look at those pictures on the dock the paps would have to have been in a boat in front of them. That dock is set against the wall of the estate.

@Donnamarie wrote:PAN, you know those pics that were taken of George and Amal in their blue outfits walking to the boat?  I would think those shots were taken in violation of the ordinance.  They just seemed too close to have been taken outside the perimeter set by the town mayor.

If the paparazzi are getting paid big bucks for anything George out and about maybe it's worth paying the fine to get those in demand pictures.  What do you think? 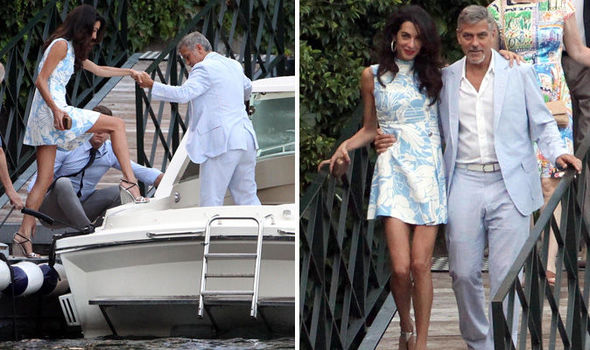 Donnamarie... this does not look like an invasion of privacy...IMO    they're smiling not scowling.  They're clearly aware there is a photographer shooting straight at them from a few feet away and with their approval. And enjoying  it.   Big deal. The point... they like the attention. IMO,  You've taken the stance that he's always being imposed on.  That's fine,and your opinion .  But please - he's aware of photographers. And could be rid of all of them with a wave of his hand if he so chose.
We all know if he wants to go stealth, he is quite good at it. And when he wants the cameras in his face, he knows how to order that up too.

George has said he is not bothered by the press when on the estate. George is not going to have them removed he knows that would look bad they aren't intruding and are not super close so why bother.

As for liking the attention I think George is used to it and Amal is getting used to it. That does not mean they like it in my opinion they can't stop every pap who wants a picture nor can they hide away from the world nor should they. They have found a balance I think, when they want stealth they do that when they are out with others and want to enjoy themselves they they do that as well. Life is too short to not enjoy it which they and their friends seem to be doing and good for them.

My question was more about the breaking of the ordinance in order to get pics worth big bucks.  I don't doubt George knows the paps are right there.  Last year in Como George was on the dock and photographers were obviously breaking the ordinance.  George was shaking his finger at them but you could tell he was taking it in stride. I think he usually does when he's being photographed.  He rarely complains.  At least publicly.

I don't agree that he and Amal like or invite the attention. I think they tolerate it.  George is so used to the intrusions.  He understands that his celebrity brings lots of attention.  Wanted and unwanted.  I think over the years he has handled it very well. As Annemarie said he and Amal have found a balance.

And yes he is stealth and with effort he can avoid photographers.  I think he tries to keep his life as normal as possible so when he wants to go out to dinner with friends or his wife he doesn't want to go to great lengths to avoid being seen.  He just wants to go out and have a good time.  And he deals with it.  Almost always in a good natured way.