Many rhanks to Frenchies 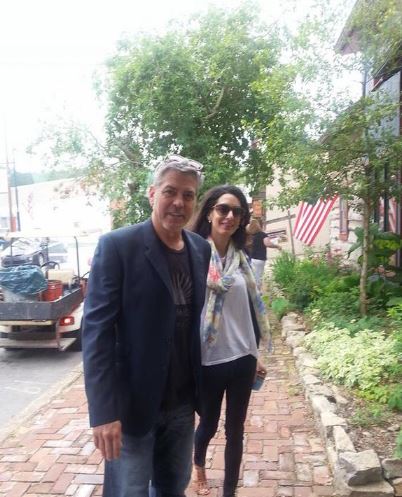 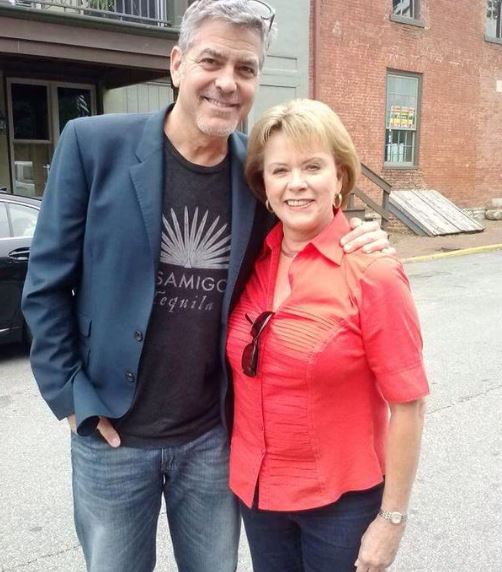 I feel bad for George he used to go home and it would be private now people post these moments for everyone to see.

We have social media to thank for that. A medium that George pretty much detests.

But he's cool.  What choice does he have?  He wants to be able to go out with friends and family and have a sense of normalcy to his life.  So he handles it in a good natured way.

I think His Nibs has come to terms with some of this stuff now - no choice but to engage on a red carpet - and since he's happier and more at ease with himself.

And I still think there's a degree of discretion in his home town.....you still don't hear that/if he has his own place down the road or that they slept over at his folks.........

LOL...agreed. Perhaps this is a "Clooneys y'all come" equivalent of the Alamuddin post-wedding reception. This may be the party planner's 'number one event' - and perhaps her last Clooney event...unless she's a relative. Must everything be lived out loud? On a positive note, I am glad to see that Amal saw fit for high-fashion couture to take a back seat to practical during this visit.

@SideEyeSally wrote:LOL...agreed.  Perhaps this is a "Clooneys y'all come" equivalent of the Alamuddin post-wedding reception.  This may be the party planner's 'number one event' - and perhaps her last Clooney event...unless she's a relative.  Must everything be lived out loud?  On a positive note, I am glad to see that Amal saw fit for high-fashion couture to take a back seat to practical during this visit.

I think the high-fashion thing was only while in New York.

The posting of the picture probably helped her business so I think George wouldn't mind that. Hopefully they can have some peace and privacy when there.

........the other thing to note is that this is part of an hotel business with rooms to book and entire houses to rent

And that Riverside Drive is very long, has an east and a west, and the Rosemary Clooney house as well

Basically their house could be anywhere around there.

Not sure if it's just me but in this pic George looks like he lost some weight. Or it his cloth which makes it look like.

After seeing him at the concert last weekend and out and about on the 31st I don't think he's lost weight.  Just might be the way his clothes are hanging on him.  But he's got something going on with his face.   Looks like a little goatee action.

Looks like he was out for lunch or dinner with his parents too. I can't get them bigger and I don't know how to find them on Facebook but fox19 repsoted them 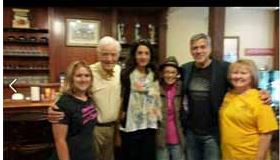 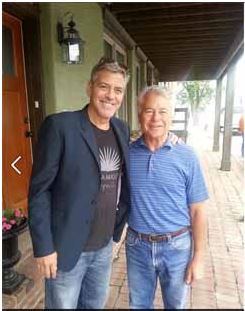 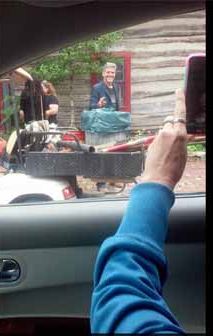 His home town reminds me a lot of Sonning, and it's obvious they're looking forward to moving in there.

And if - if - there should be a pregnancy, I think it very unlikely until they've settled there

That jacket must have been hanging in the closet of his old room at his parents' house since before he left home. Love him for not giving even half a damn.

Have we got this update?

george is looking good and happy. Kentucky is his home town and he is happiest with his family. bg

Moved the Posts to the correct thread 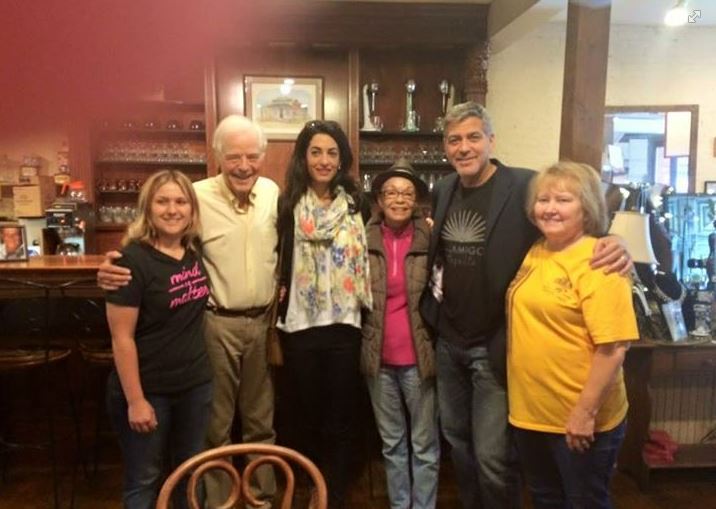 Nina in her pink sneakers cute.

I never realized Nina was so tiny! Next to the rest of them she looks like a little girl.

Commenter Damon Lewis said Nick is really showing his age. I hope George realizes that he may not have much more time left with his parents and spends as much time with them as he can. No one will ever be able to take their place once they're gone.

Wonder where Ad and the kids were.

Actor George Clooney's visit to Urban Artifact was about the band, not the beer George Clooney with friends at the Augusta Pub

Even in the midst of what she termed a "huge family reunion," Nina Clooney still found time to brighten my day.

I wanted to catch up with the former Mayor of Augusta, Ky., after the leading edge of that family gathering generated such a buzz last week. That was when Nina, husband Nick and daughter Ada were joined by Nina and Nick's youngest son George and his new wife Amal.

Amal's introduction to the Tri-State amounted to one community wide embrace, which she warmly returned. Both George's parents glowingly recounted how their new daughter-in-law seized the opportunity to "see where George was from."

Join WCPO Insider to find out more about why Clooney went to Urban Artifact brewery in Northside and more about his visit to the Tri-State.
http://www.wcpo.com/news/insider/actor-george-clooneys-visit-to-urban-artifact-was-about-the-band-not-the-beer

Now that I think of it, this was Amal's first visit to Kentucky but has George already been to the town where Amal grew up?

nice photo of our boy shooting pool, but having a hard time copy/paste article.

05 JUNE 2015
George Clooney took his wife Amal to sample the delights of the Kentucky town where he grew up this week. The famous couple enjoyed a relaxed trip to Augusta, where 54-year-old George was visiting family as part of his annual return to the state, stopping by the local eateries and pubs.

The Hollywood actor and his human rights lawyer love delighted locals throughout their stay by posing for a host of photos while they sampled some Southern hospitality. 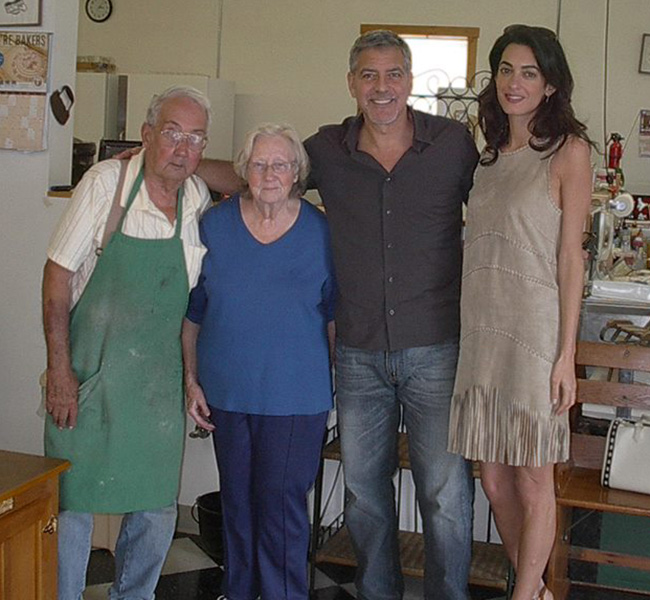 Magee's Bakery, whose custard tarts George was keen for Amal to try, joked about welcoming the famous shoppers on their Facebook page.

"This guy and his wife show up wanting to take pictures," the bakery posted next to two snapshots of George and Amal with a group of its workers. "This one time would not hurt. Fame, what can you do."

While George is obviously no stranger to Kentucky, his Lebanon-born wife of eight months certainly proved a hit with local residents.

"Amal is so friendly and nice!!

#amalclooney," an Instagram user captioned a photo of the 37-year-old.

The same account holder then posted a string of amusing snaps showing George with a group of pub-goers, pulling faces and laughing at the camera.

George, who was born in Lexington Kentucky in 1961, grew up in the area and attended elementary school in Fort Mitchell, Kentucky and Mason, Ohio.

When his parents Nick and Nina moved to Augusta, George attended Augusta High School and later tried out to play professional baseball with Ohio's Cincinnati Reds in 1977.

George later studied at Northern Kentucky University from 1979 to 1981 where he majored in broadcast journalism. George also briefly attended the University of Cincinnati but didn't graduate from either institution.

PAN I moved your post to the thread below