Yesterday at 19:53 by annemarie

» George Clooney in Worcester to direct film 'The Tender Bar 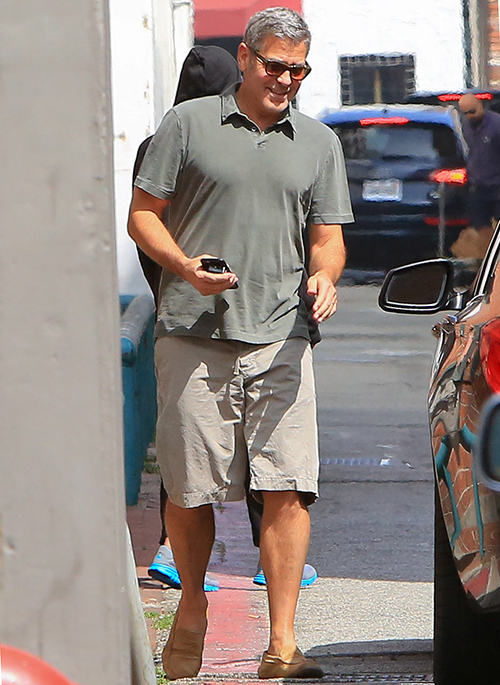 We love George Clooney, but apparently we're the only ones these days! While we haven't seem Tomorrowland, word on the street is that the star's latest film is a total flop. And that's putting it nicely!

In a recent article on the New York Post's website titled, "Face it, George Clooney sucks," they write, "Clooney isn’t even a movie star. He’s just a guy who keeps getting highly paid to make movies nobody wants to see." Um, wow!

Despite the terrible reviews, George pasted a smile on his face when we snapped him running errands yesterday in Beverly Hills. Wifey Amal Clooney was nowhere around, but we have a feeling they will be together sooner or later. After all the duo, who got married in November, reportedly made a pact that they won't spend more than a week apart. Of course, the couple have been plagued with divorce rumors for the last six months, so who knows what will happen? Tick tock...
Links: George Clooney

I don't care if Amal really is blowing through $2 million dollars of his money each month.  She's spending some of it on new clothes for him that actually fit, so God bless her. It's worth it. I'm not even sure I've seen him wear a polo shirt before.  A compromise to get him out of the dang T-shirts, already?

Oh Missa, I've got several pics of him in polo shirts.  So, yes, he's worn polo shirts before.


His moobs and his package look mighty fine!

It is nice to see him in something other than jeans and t shirt looking good George.

He does look good in the green polo.  And I've seen him polos before.  He just doesn't wear them often.  But this is a nice color combo.  And I'm liking the loafers too.  Well done George.  Those tanned legs look mighty fine too!

Ah nice pics. Thanks for posting.

I miss the summer. It is raining here. Now I see George in his summer outfit and want the same

Lo and behold, George is wearing loafers and a polo shirt! Does he have a stylist too now?!

Codexchick wrote:Lo and behold, George is wearing loafers and a polo shirt! Does he have a stylist too now?!

I believe that "Tomorrowland" opened at #1 last week?? So not understanding how it was a "bomb"? I saw it and really liked it!

They're just looking for a headline. Perhaps they're commenting based on expectation vs. actual and then cost to produce.

janieb - They're calling it a "bomb" because it cost $190 million to produce and has made much less than they anticipated since its opening weekend. The lousy reviews (IMO undeserved) haven't helped. Whatever the critics reasons, the bad reviews are keeping people away from the movie.

Bottom line: They don't think they'll make their money back.

Just a thought, does anyone know if George took his fee as the usual box office takings, and "bought" into the film? Just that if it's not doing as well as expected, will he make a personal loss and if so how much??

I don't think George was involved in the movie except as an actor. I'm guessing he just took a straight fee for his part, as Disney probably didn't need financing partners. Could be wrong, though. - Way2Old would probably know better.

Yep I would think the same Lizzy.  Don't think Disney would have had issues with financing.  Would think George got paid well for this part.   But Way2 would be the go-to on this question.

Don't know about being the go-to person, but I'd venture to say that George was 'just' a hired gun on this, with no backend except the standard on residuals and aftermarket distribution. That's the way Disney usually conducts its business. Plus, I don't recall George or Smokehouse listed in the production credits, which would happen if they shared in production financing.

Nope, this is all Disney. George showed up and did his job. Very well, I might add.

I wish his first project back after 'Monuments Men' was performing better, but I'm sure he's taking it in stride. You do your best, but once it's out there, you can't control the audience reaction.

Way2 you are the go-to person on the movie industry as far as I'm concerned.

I feel the same way.  Wish this movie had gotten better reviews and doing better at the box office for George's sake.  Almost all the reviews of G's performance were really positive.  He was just the right actor for this role.  But the movie's reviews are overshadowing his performance.  I assume G has a pretty healthy attitude towards the ups and downs in the unpredictable world of movie making.

Do actors ever see the finished product before it premieres?  Was wondering if George saw this coming at all.

Just a side note - I knew I'd seen that polo shirt somewhere, but didn't remember where. George wore it in "Burn After Reading", which I'm watching now (and which for some reason I keep thinking of as "Burn BEFORE Reading" - which I know makes absolutely no sense whatsoever!) I wonder if he kept the shirt as a souvenir or if it was his to begin with?

Some actors are afforded the opportunity to see the film before its release. George may or may not have been. He's not really in the Disney fold, and they are a very insular bunch when it comes to their intellectual property. But maybe Bird or Lindelof screened it for George as a friend-to-friend thing.

LizzyNY, 'Burn After Reading' is my example of why the Coens frustrate me. But George played dark comedy perfectly in that movie -- which is to say, he played it pretty straight.

Way2Old-  Just curious. What frustrates you about "Burn After Reading"? I came across it on tv this afternoon and , since Mother Nature has decided to take us back to November, I decided to kill a couple of hours while stuck in the house. I had forgotten how funny George was in this. The scene where he found Brad in the closet is priceless.

How much time do you have?

This is the wrong place for it, and I'm procrastinating on something with a looming deadline, so maybe I'll post in the appropriate thread tomorrow.

But for starters, after weaving these characters together in a way that they didn't even know they were linked -- funny, right? -- and then bringing each if them to their do-or-die moment, the Coens decide to end the story with two ancillary characters sitting in an office talking about what happened or should happen to the main characters. Talk about anti-climactic. End the damn story with the characters we've been watching for two hours, for fuck's sake. The Coens are great at building situations, but they can suck at paying them off.

@Way2Old4Dis wrote:Some actors are afforded the opportunity to see the film before its release. George may or may not have been. He's not really in the Disney fold, and they are a very insular bunch when it comes to their intellectual property. But maybe Bird or Lindelof screened it for George as a friend-to-friend thing.

George said himself he hasnt seen the film till its press screening May 8.

Glad to see george in his new summer outfit. green and beige and loafers. looking good george and happy to be out and about. bg