Wondered about this when the Gerbers said they were going.........

They were both there

I don't see a picture of George just someone saying they saw him there. I could post something like that and it not be true.

And that picture of Amal with the gal could have been taken anywhere too.

I agree. I've seen lots of things on Instagram with a hashtag #GeorgeClooney and the picture has nothing to do with George.

Also recently someone tweeted they were in Vancouver when they were over in Tokyo. Tweet was bogus.

You could be right. Was just going by the tweeter, who's a talent promotor in LA and Las Vegas casinos and Kiki is one of his flock. Record producer as well. If true, she must have been delighted to run into Amal......!

Yes they were there.
I saw a picture and George was singing along !

From a video, Jo? Sounds like a great concert - an impersonator got up and sang! 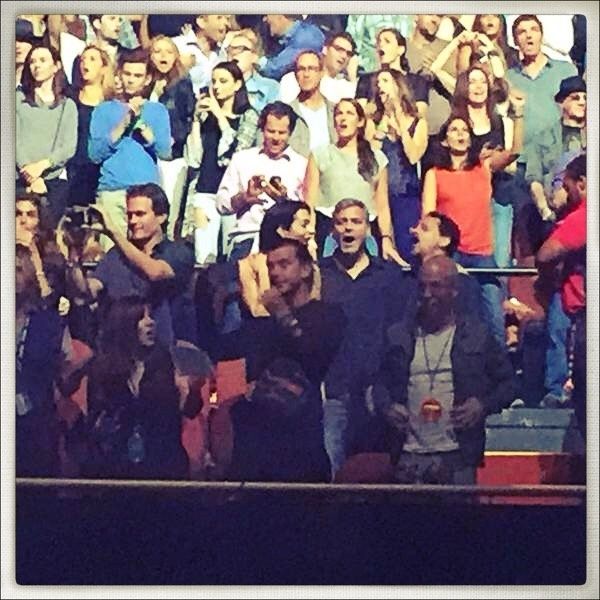 I take it back. Thanks for posting the photo!

George, Amal, Cindy, Rande were there and it Looks like Grant was there too??? 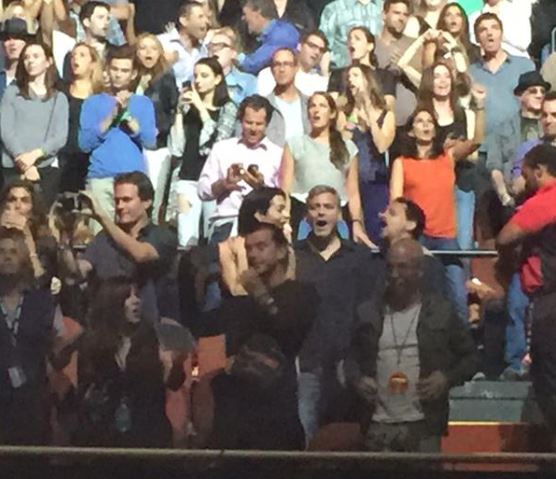 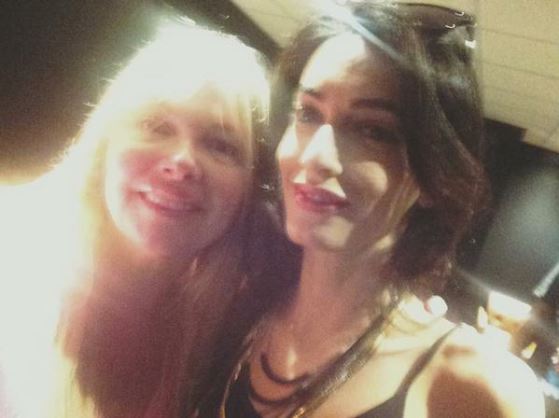 Merged threads and moved it to the news section, (didn't see we had it already). Thanks for the find

Initially it was thought that Amal only attended.  So it wasn't in George News.  Thanks for moving Nicky!

The guy standing next George is Grant?

I'm pleased that Bono was fit enough to sing again
after his bike accident.
Apparently he can't play the guitar at the moment
due to the injuries to his arm and hand.

Yes that is Grant, DougRoss.

Also, in front of them is Gavin Rossdale.

TMZ video of them all dancing to the final song

They look like they were having a great time.  I don't think I've ever seen a picture of George at a concert.  Nice to see him enjoying himself.

It looks like they all had a good time.

George leaving.........bodyguard at the top of the stairs

@party animal - not! wrote:TMZ video of them all dancing to the final song

Grant looks a bit lost by himself

Love that little video.  Think George is whispering to Amal "I have found what I'm looking for".

love the videos! they seem so happy and enjoy that evening!

John Mayer, left, and Irving Azoff attend the U2 concert at the Forum in Inglewood, CA on May 30, 2015.Paul A. Hebert for the Forum
It was also date night for several celebrity couples, including George and Amal Clooney, Ashton Kutcher and Mila Kunis, Cindy Crawford and Rande Gerber,Cameron Diaz and Benji Madden and Nicole Richie and Joel Madden. Jennifer Lawrence and Chris Martin were also spotted at the official U2 afterparty, held at the Chateau Marmont, while Charlize Theron and Sean Penn made the Forum rounds, albeit on different nights.

@party animal - not! wrote:TMZ video of them all dancing to the final song

Great insight into G&A's social life....rightly or wrongly...
I liked seeing them out with friends.

There are numerous videos on you tube of
the U2 concerts in LA if anyone is interested
in the music.

Oh PigPen if I were Amal I'd have my hand on his ass.  For sure!

@Donnamarie wrote:Oh PigPen if I were Amal I'd have my hand on his ass.  For sure!

Oh I think she does have her left hand on his ass !
I've noticed that Amal is very touchy feely when they're together.
And of course George loves to hug so I think they're very suited
in that department.

Long May It Last I say.

Why's it demeaning? He's got his arm wrapped right round - looks more like it's on her right hip and he's pulling her in towards him.

Anyway, nice to see him getting to do some 'normal' stuff and have fun with friends.

Demeaning , um no loving and very attached to his wife. They are affectionate and for me it is nice to see they are coming out of that every thing hidden and acting like what they are happy newlyweds. Amal is very touchy feely with George which is lovely to see. It reminds me of when they were first engaged and someone said amal looked like she wanted to hump george's leg lol.

Here's the full concert that George and Amal went to, at about 1:24:35 you can hear Bono dedicate the song "Every Breaking Wave" to them:

Obviously there was a dress code for the evening but Chelsea Handler didn't get the memo.

@annemarie wrote:Demeaning , um no loving and very attached to his wife. They are affectionate and for me it is nice to see they are coming out of that every thing hidden and acting like what they are happy newlyweds. Amal is very touchy feely with George which is lovely to see. It reminds me of when they were first engaged and someone said amal looked like she wanted to hump george's leg lol.

Ha. That was me, and Lord, do you have a good memory. I think that may have been way back among my first comments about the engagement.

I think G had much more fun at Toto.

And U2 song Bono dedicated had lyrics that are not romantic....

I like Who's Gonna Ride Your Wild Horses?
And some other classics.

Poor G looks like he's wasted drunk trying to escape a headlock or a smothering by the big intimidating hired 2nd wife. These photos are so obviously staged.
She doubles up as security like Stacy Kebler did.
Big gaunt women drown him  to feeble insignificance.

I think you all need to remember that George is on "old style" guy with manly intentions like the hand on ass, maybe even a little slap! who knows!! But if he feels comfortable or maybe as a married couple, you can't escape what your other half does to you! it's the Kentucky caveman syndrome coming to light! Some women love this others don't, let's see if Mrs C approves??

I think she definitely approves she reaches for him and hugs him. They are very affectionate with each other.

Oh dear. Claptrap from someone. So clearly not what happened at all.

George actually turned his back on the stage to face Amal and dance with her...........

Pa we both saw the same thing they were having fun dancing.

George and Amal are totally into each other.  They are very physically affectionate and comfortable in each other's presence.  They look like they enjoy being close.  I don't know how it can be seen any other way.

@annemarie wrote:Demeaning , um no loving and very attached to his wife. They are affectionate and for me it is nice to see they are coming out of that every thing hidden and acting like what they are happy newlyweds. Amal is very touchy feely with George which is lovely to see. It reminds me of when they were first engaged and someone said amal looked like she wanted to hump george's leg lol.

Everything hidden???:???? Short memory annemarie.  Go back to the engagement sites.  She's had her head on his shoulder, fed him from her plate  ( both at an Italian restaurant), kissed, etc etc etc.


And before you decide to take me out to the wood shed for disagreeing with you---- agree to disagree!

No wood shed pigpen,I remember those pictures they were all taken on the same night  at villa D'este. Those are pretty much the only pictures where they are showing affection.  The only other affection kind of pictures are when they are leaving a restaurant and they are standing in front of a window.