Couple receives well wishes from Hollywood stars, all living presidents and even the Pope as part of star-studded 70th anniversary present from their granddaughter

When one California couple celebrated their 70th wedding anniversary, the milestone was so impressive that Hollywood stars, every living U.S. president and even the Pope wanted to pass on their congratulations.

More than 150 celebrities, including George Clooney, Judi Dench, Dolly Parton and Heidi Klum, congratulated Richard and Mary Arambula of Bakersfield after their granddaughter asked hundreds of actors, musicians, politicians and strangers to write them notes.

The couple, who celebrated their 70th wedding anniversary last December, were stunned when their granddaughter, who lives in Germany, presented them with the letters during a visit last week.

'This girl here is something else,' Mary, 86, told the Bakersfield Californian, indicating her granddaughter, Belinda Bannister. 'She said she was going to throw us a party. It turned out to be a big party.' 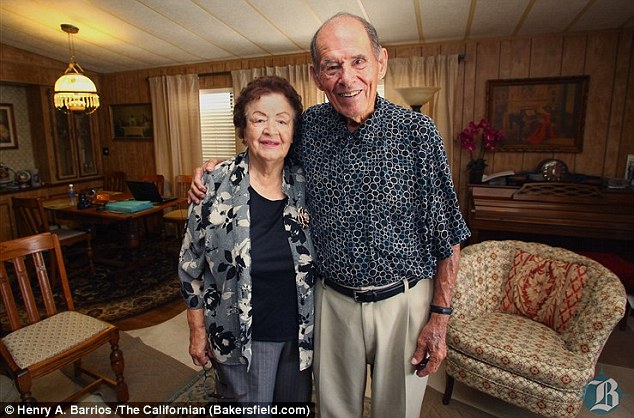 Celebration: More than 350 people from across the world, including Hollywood stars, musicians and politicians, have wished Richard and Mary Arambula of Bakersfield, California a happy 70th wedding anniversary 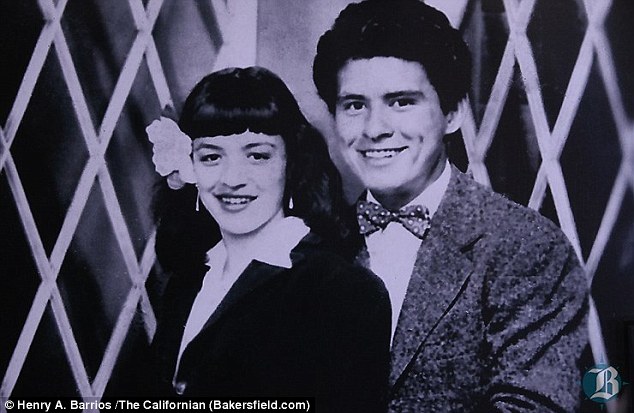 Younger years: The couple married when Mary was just 16 and Richard was 17 in 1944
Bannister said she was inspired to get as many notes from as many people as possible after her grandmother received a birthday greeting from the White House in 2012.

'Then we thought, "Who else?" It just went from there,' she said.

In March 2014, she set up a Facebook page asking people to send notes and starting writing to celebrities and officials.

First came notes from Sophia Loren and Judi Dench, then others started pouring in.

'I'm impressed with what you've done with your marriage all these years,' Regis Philbin wrote, while actor Tommy Chong added: 'Congratulations on being together seventy years and not killing each other.' 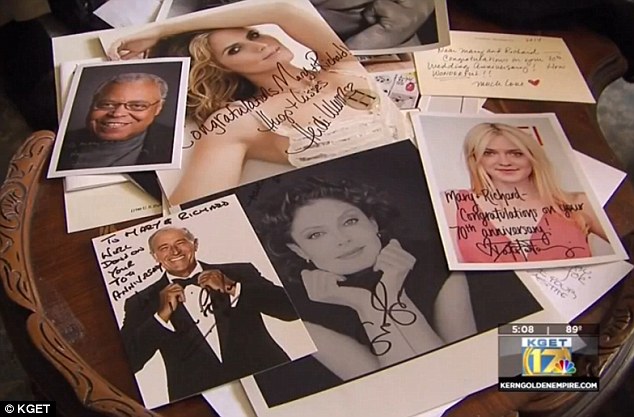 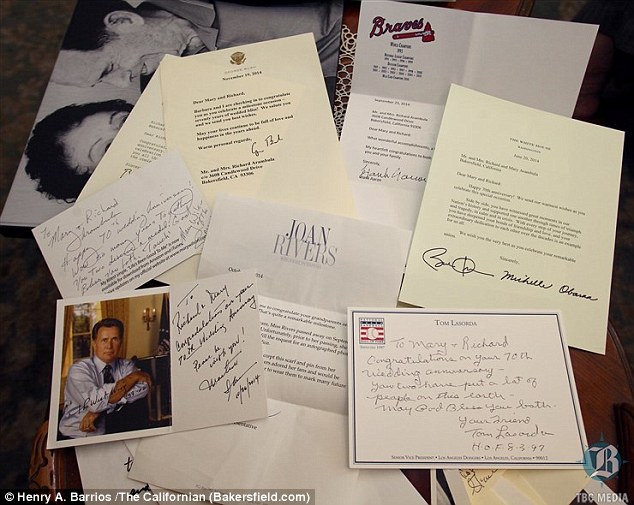 Among the well-wishers were Martin Sheen, the Atlanta Braves and Joan Rivers (before her death last year) 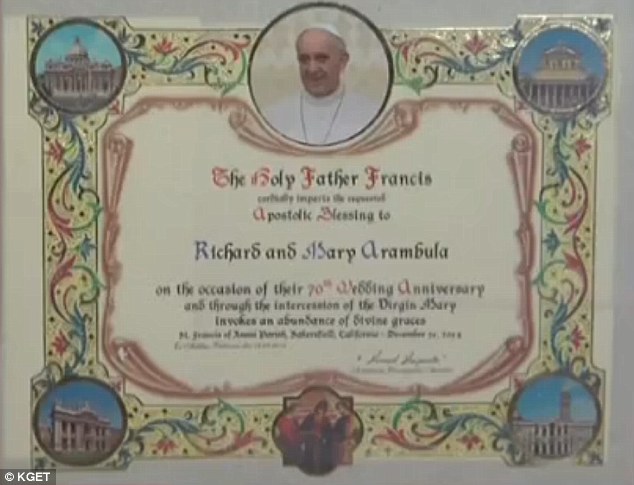 Meaningful: Among the couple's favorite items was an Apostle Blessing from Pope Francis, pictured 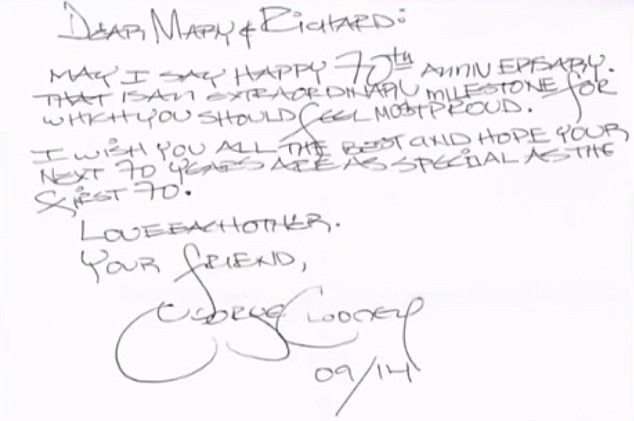 Kind words: George Clooney wrote this note for the couple telling them to 'love each other' 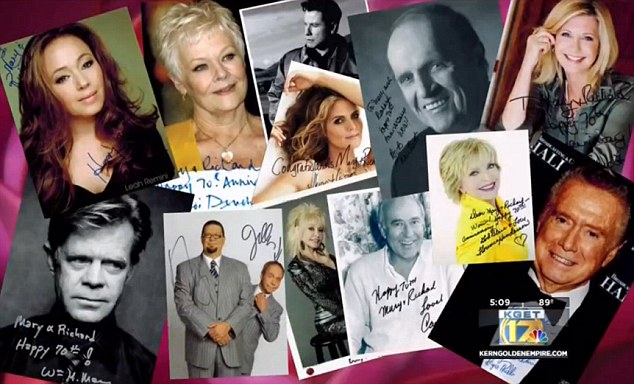 Rod Stewart, James Earl Jones and even Judge Judy got in touch.

'May I say happy 70th anniversary,' George Clooney added in a handwritten note. 'That is an extraordinary milestone for which you should feel most proud.'

He signed off: 'Love each other. Your friend, George Clooney.'

'Your extraordinary dedication to each other over decades is an example for us all,' Obama and his wife Michelle wrote.

Their favorite sports teams - the Dallas Cowboys, the Los Angeles Lakers and the Los Angeles Dodgers - also sent letters of congratulations, as well as sports legends including Shaquille O'Neil.

Local law enforcement and charities also sent their congratulations to the couple, who have lived in Bakersfield since the 1940s. 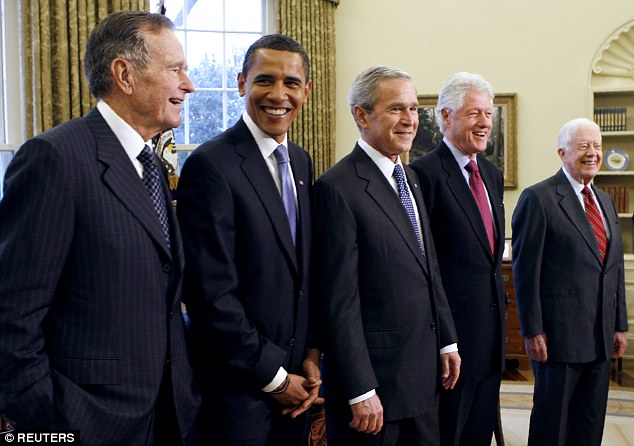 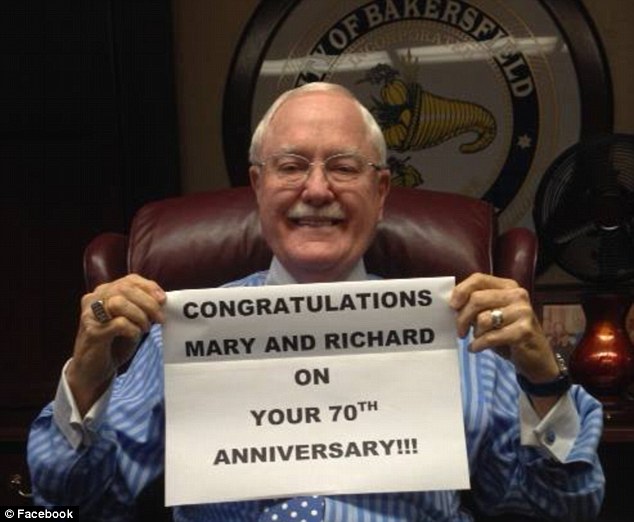 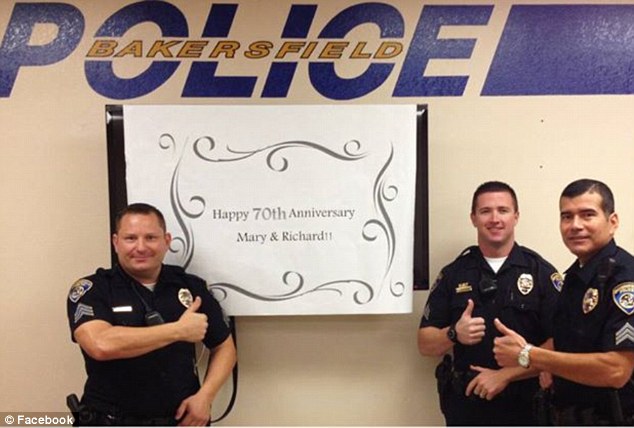 Thumbs up: Bakersfield police officers also congratulated the couple, who have lived in the city since the 40s

Among the most meaningful letters came from comedy great Joan Rivers, who passed away on September 4. She had told her staff she wanted to reach out to the couple but was unable to send a note before her death, so her staff sent one on her behalf. They also sent a scarf and a pin to Mary.

'I am touched that she would pay so much to send it to me because I'm just a nobody from Bakersfield,' Mary told ABC.

Pope Francis also sent an Apostolic blessing which the couple proudly showed off in a frame.

'That was real meaningful to me,' Richard, 87, told the Bakersfield Californian.

The couple, both originally from Texas, came to Bakersfield in the early 1940s and married when they were just 16 and 17 in 1944. 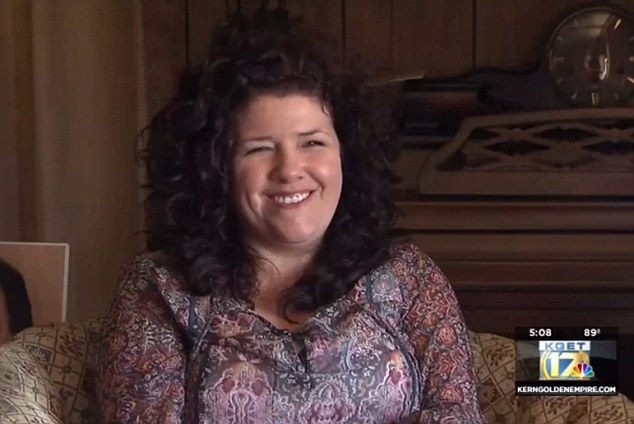 Great idea: The couple's granddaughter, Belinda Bannister, pictured, thought up the idea and started writing to celebrities and officials in March 2014. She was shocked by the number of responses, she said 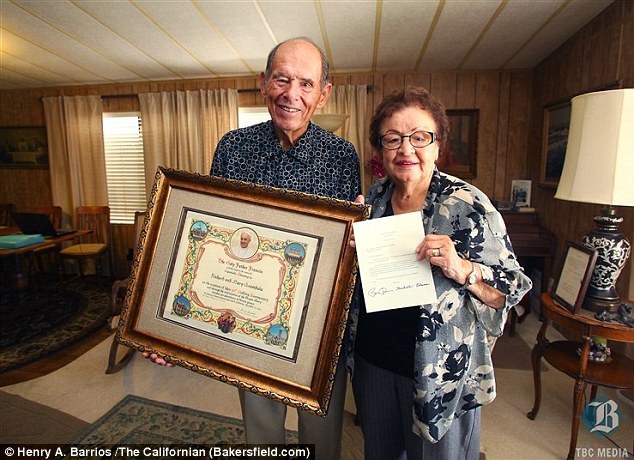 The couple were most honored by the blessing from Pope Francis. They framed his message to them 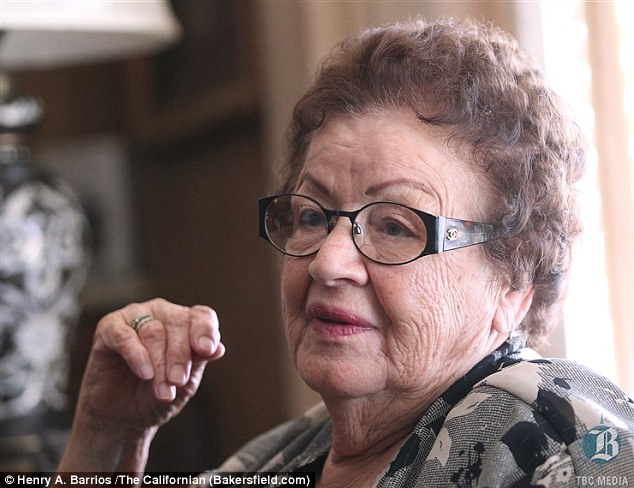 Marriage wasn't always easy: 'There was times that I wanted to get the gun, get out of my house,' she cracked


They said that it hasn't always been 'sweet rolling'.

'There was times that I wanted to get the gun, get out of my house,' Mary joked to KGET.

'These people are amazing,' Bannister said of her grandparents. 'They are just fabulous and I love them and I want everyone to know about it so they can know how amazing they are.'

That is so sweet.