So given this is a thread about George and Amal visiting the set with the dogs, did the dogs take a poop and more importantly, did anyone pick it up?

New article in their mouthpiece of choice:

George and Amal Clooney Take Manhattan: Inside Their New Life 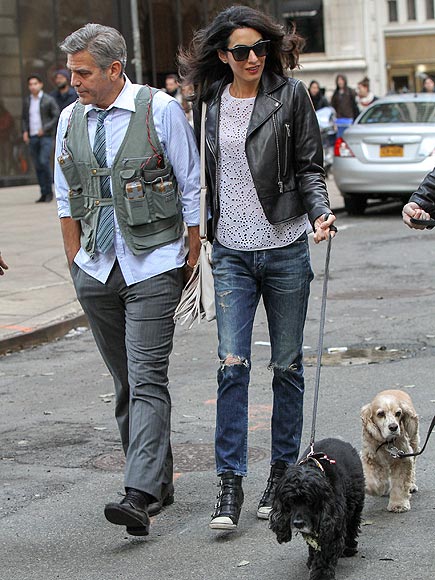 Since taking up residence in New York City earlier this year, Amal and George Clooney have navigated life in the Big Apple with glamorous aplomb. "They're having a great time in New York, both working really hard but also having fun together," a source who knows the couple tells PEOPLE in the magazine's new issue.

While Amal is busy as a visiting faculty member at Columbia Law School this spring, and George is shooting Money Monster, a Jodie Foster-directed thriller costarring Julia Roberts, the powerhouse newlyweds have found downtime to enjoy the city – and each other's company.

On Sunday, Amal, 37, and her brother Ziad Alameddine visited George, 53, on set as he filmed a scene involving "explosives" (thus the dangerous-looking vest). Amal watched the shoot on a monitor, and the couple were all smiles between takes as they held hands and walked their Cocker Spaniels, Einstein and Louie.

"Amal and George look happy and in love," says a source in their New York social circle. "They're spending time with other couples and friends who are bright and driven and interested in improving the world."

The duo, who tied the knot in September, have enjoyed romantic date nights (an onlooker who spotted them enjoying black truffles at Café Boulud recently says, "They were laughing and talking the whole time") and hit the town with an eclectic group of friends and family. On their social calendar in the last month alone: dinner at the home of Tina Brown and husband Sir Harold Evans, drinks with Justice Sonia Sotomayor at Cipriani and a fun-filled evening with George's mom, Nina, over pasta and salad at Patsy's Italian Restaurant.

"Amal's very much in love and extremely busy," says a source close to the lawyer, adding that she's "not thinking about babies" at the moment.

George, too, has a full slate. In fact, the star will soon bid a temporary farewell to New York when he heads overseas to promote Tomorrowland, his Disney sci-fi action film out on May 22.

@LornaDoone wrote:So given this is a thread about George and Amal visiting the set with the dogs, did the dogs take a poop and more importantly, did anyone pick it up?

What happnes when the dog poops in NY and the owner doesn't pick it up? Do you have to pay a fee?

Wonder if George trained his dog when to poop. They are not only house trained probably also "Movie Set" trained hehehehehe

@LornaDoone wrote:So given this is a thread about George and Amal visiting the set with the dogs, did the dogs take a poop and more importantly, did anyone pick it up?

What happnes when the dog poops in NY and the owner doesn't pick it up? Do you have to pay a fee?

Wonder if George trained his dog when to poop. They are not only house trained probably also "Movie Set" trained hehehehehe

Nicky you funny girl!  Lizzy might know what the poop laws are in NYC. I suspect there are city ordinances for that sort of thing.  The doggies looked very well behaved on set.

I remember when George was dating Elisabetta and she brought her dog to the set of The American.  Rumor had it that her dog left some messes  that didn't get cleaned up and the crew wasn't too pleased.  Don't know if that story was true.

i love it. Did you create that or does this wording really exist  hehehe

Yeah, it's a laugh riot when people don't pick up after their pups, and you step in it.  The late Joan Rivers got a citation for not picking up after her dog in a NY park.  She got angry at being told to scoop the poop, and of course.. it made the paper.  Think it was Page Six.

Yep! There are "pooper scooper" laws in NYC. You're supposed to pick up your dog's poop and dispose of it properly. If you don't, and you get caught, there is a fine. I don't have a dog so I don't know exactly how much the fine is, but I think it's somewhere around $200 - which, if you've ever stepped in dog doo while wearing brand new shoes, you know is nowhere near enough!

I live in a suburb and when I walk my dog I see a fair amount of poop that owners don't bother to pick up.  It infuriates me.  Not only can you end up stepping in it but if you're walking your dog sometimes they step in it or sniff it.  YUK!

before we get yelled at.... back on topic ladies.

but that doesn't mean you have to like it!

Here is a different picture of Amal with the dogs.

Einstein's getting a gray muzzle; I wonder how old he is.  It can be tough to know for sure with rescues. Maybe they got Louie to help keep him active and spry.

There's something very catty to be said in response to that...

Oh I like to hold Einstein too and cuddle him

I'm not sure if this was already posted but Louie is adopted too from LA's Camp Cocker Rescue as per the below paper. 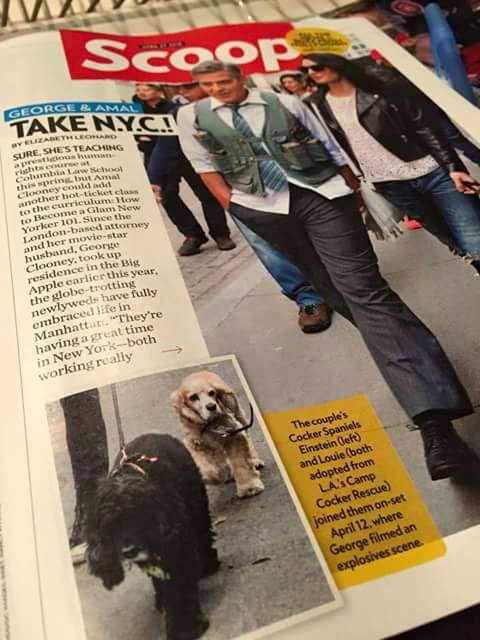 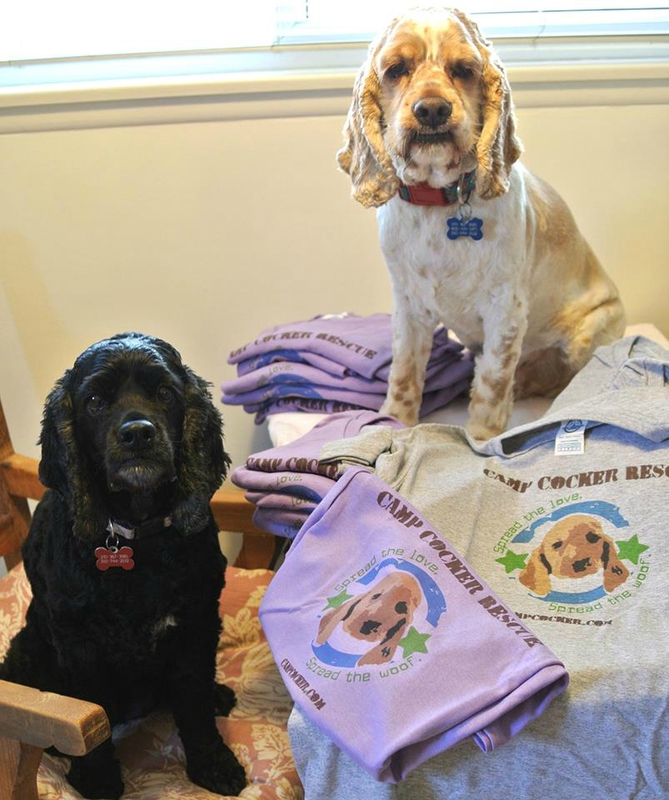 What a discreet bunch!

George-Clooney US have a few more shots: 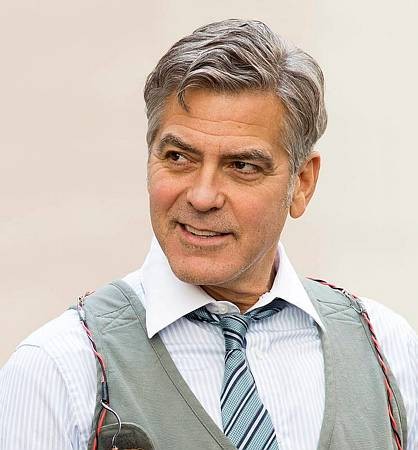 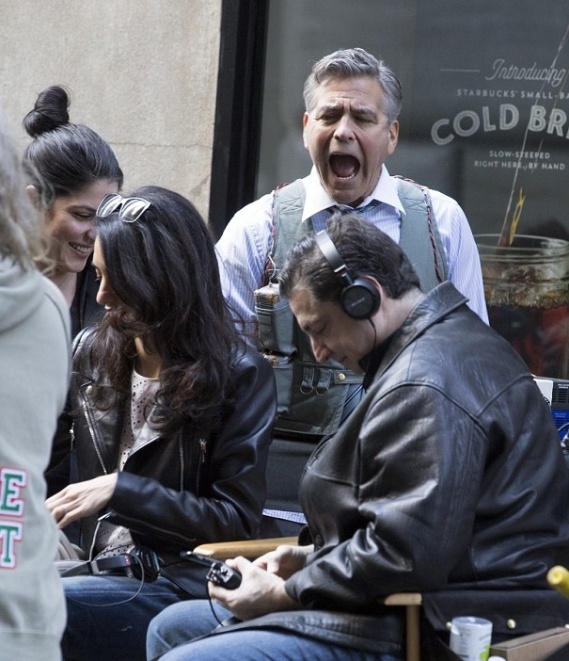 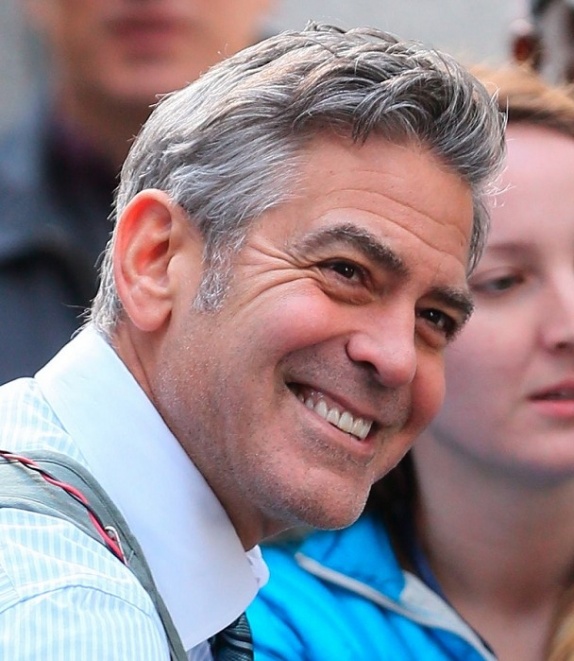 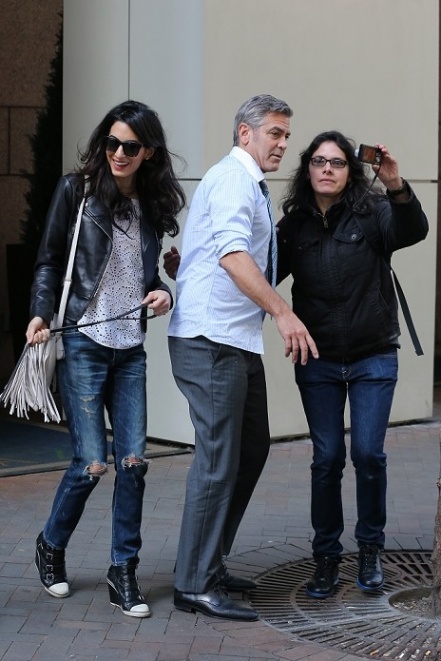 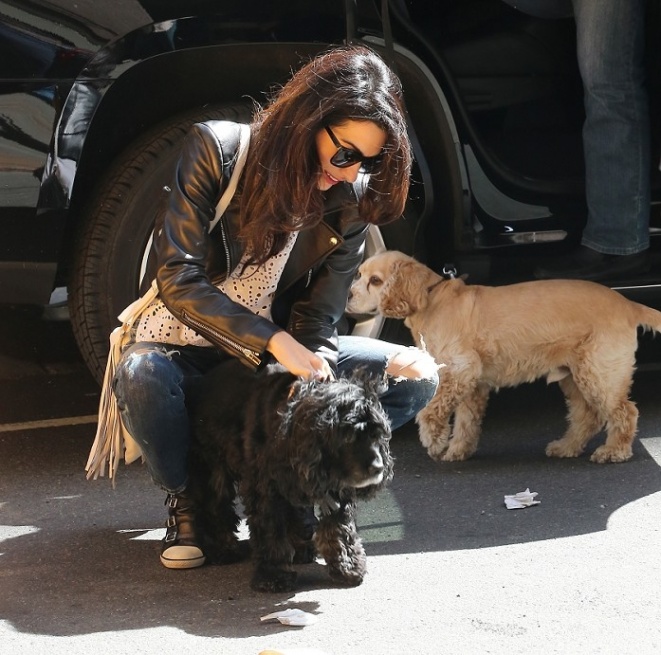 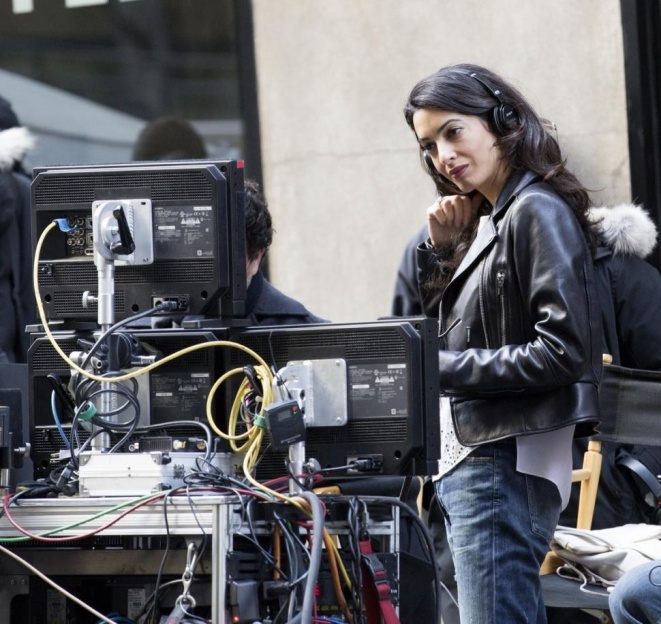 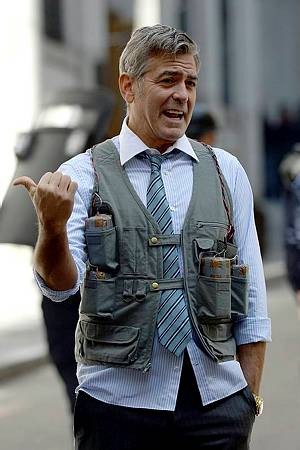 I can't imagine what you mean, Way2.

Einsteim has known a lot of other dogs in his life, but there's just something special about Louie. He's beautiful, and super smart. He doesn't care about Einstein's fame. All of Einstein's friends love him. Einstein has finally met his equal.

Here's a co-owner putting on his lead

@Way2Old4Dis wrote:There's something very catty to be said in response to that...

Maybe they got Louie to help keep him active and spry.

Missa filled in some blanks

Missa I think you nailed this doggy relationship that Einstein and Louie share quite brilliantly!

What a discreet bunch!

I guess it just depends when in 2013.......or whether he adopted again to keep Einstein company when he was away.

@party animal - not! wrote:George-Clooney US have a few more shots:

YES Mel and you can see the sparkle in his eyes.... i love close ups from him

I guess it just depends when in 2013.......or whether he adopted again to keep Einstein company when he was away.

Apparently Camp Cocker have an interview coming out soon with People
on Louie's story.
Should be a good read. There are some hints in the comments on their
Twitter page about them buying Scoop to have pictures of Einstein & Louie.
That's a lovely publicity photo of the two doggies !

..........and here's hoping His Nibs has negotiated that all the money goes to Camp Cocker