ON TUESDAY, the day before its first post-attack issue hits newsstands, the two-thirds of the Charlie Hebdo staff that is still alive and working gave an emotional news conference.

“We’ve been called dangerous, irresponsible troublemakers. But we’re above all cartoonists, just like kids who like to draw,” said artist Renald Luzier, who goes by the pen name “Luz,” during the press briefing in Paris, according to Bloomberg News.
Nearly a week after the offices of the French satirical weekly Charlie Hebdo were attacked by masked gunmen — who killed 12 people last Wednesday, including five cartoonists — staff members spoke about what they’re calling “the survivor’s issue,” which they said will be published in 16 languages (including English, Spanish and Arabic), as 3-million copies are distributed worldwide.

The cover, as revealed yesterday, features a caricature of the Islamic prophet Muhammad holding a sign that bears the global rallying cry: “Je suis Charlie” (“I am Charlie,” with a secondary meaning of “I follow Charlie”). The caption above his head reads, “Tout est pardonné” — “All is forgiven.”
“I am sorry we’ve drawn him again, but the Muhammad we’ve drawn is first of all a man who’s crying,” said cover artist Luz, reports Bloomberg News.
Wednesday’s issue will be about half the size of its typical 16 pages, and “won’t be a tribute issue,” according to Charlie Hebdo spokesman Richard Malka, reports France Info radio. Instead, the edition will be presented as if its slain staff members were still alive, including the veteran cartoonists who went by the pen names “Charb,” “Honore”, “Cabu,” “Wolinski” and “Tignous.” The issue will include anti-religious cartoons from the murdered artists.
The news conference offered moments of confirmation, as Luz first said that the cover image represented “just a little guy who’s crying,” before adding: “Yes, it is Muhammad,” reports CBS News.
The briefing also showcased statements of defiance, as Luz said: “It was not the front page the world wanted us to make, but it was the one that we wanted to make.”
And the comments in front of the media scrum even had moments of levity. “We’d like to thank all our new subscribers, including Arnold Schwarzenegger. … And thank you to [George] Clooney, he can subscribe, this way all the women at the paper will have his address,” joked editor-in-chief Gérard Biard, according to BuzzFeed.
The issue was pulled together “with joy as well as pain,” Biard — at the helm since Stephane Charbonnier’s murder last week — told the gathering at a cafe atop the offices of Libération, where the Charlie Hebdo journalists have worked, behind beefed-up security forces, since Friday.

Nice of them to thank George. Understand the magazine printed 3 million copies and they sold out? They usually only sell 30,000 an issue. I'm sure they would give anything to have their staff back alive and well and selling only 30,000 copies this week. So very sad. 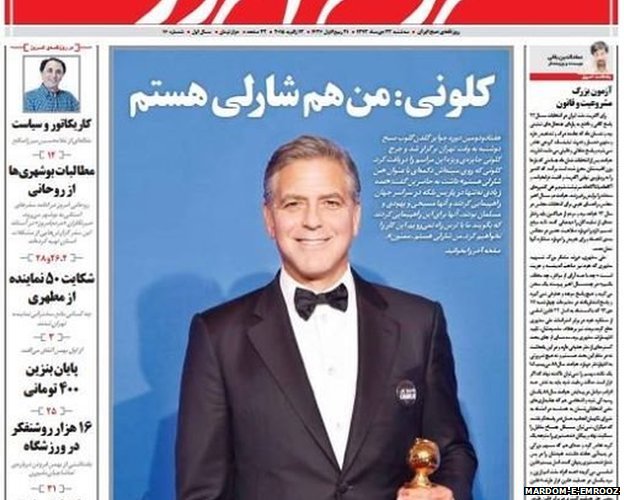 George Clooney, who is also popular in Iran, joined tributes to the victims of the French attacks by wearing a "Je Suis Charlie" badge

An Iranian court has ordered the closure of a newspaper that published a picture of George Clooney wearing a badge backing French magazine Charlie Hebdo, which was attacked last week.
The Mardom e-Emruz (Today's People) newspaper ran a picture of the actor headlined "I'm Charlie too".

But conservative elements in Teheran were incensed by a catchphrase they regard as "anti-Islamic", BBC Middle East analyst Alan Johnston says.

Judges said the headline was "obscene".

Charlie Hebdo has published cartoons of the Prophet Muhammad, which many Muslims see as an offensive act.

The cover of the magazine's latest edition, published after the attack in which 12 people were killed, featured a cartoon of the Prophet weeping while holding a sign saying "I am Charlie".

Seven million copies of the edition are being printed in view of extraordinary demand, distributors announced on Saturday.

"The court in charge of cultural affairs and the media imposed the ban on the newspaper for publishing a headline and a picture which it deemed insulting," Mardom-e Emrouz director Ahmad Sattari told the Irna news agency.

Ebrahim Khalili, a senior editor with BBC Persian, says the newspaper was only in its first month of publication, but that its political position was seen as close to that of Iran's President Hassan Rouhani.

He says the court's ruling is pending a final decision due later, but is unlikely to be overturned.

The fact that it was published at all is an interesting one........

This sounds like a perfect case for Amal - freedom of the press violated for a newspaper publishing her husband's picture. Somehow, though, I don't see her taking the case.

I say that as someone who feels there has been social media moment in history…..it has shone a light on the haves and have nots…..twitter France gave birth to "Je suis Charlie" at roughly the same time as 2500 + men women children and unborn babies suffered horrific deaths and were set a light by Boko Haram.

Somehow the world seems divided in two like never before.

One million people in Paris came together and marched for freedom of speech….. this was a first of it’s type….thats what grabbed our imaginations.…make no mistake IF Twitter and Facebook FR had existed at the time of Hitlers…..would things have turned out differently?…..He had the freedom to speak, and didn’t hold back on the offence.  Freedom with boundaries….is that bad?

As I say, I applaud freedom of speech…..I just don’t think it should ever be unkind…..and I’m not fooled into thinking Paris was so special.


Twitter and Facebook, have commentators not Newsmen.  It’s become almost impossible to find the important news, the men and women that delivered it to our door have become an endangered species.

Iranian authorities have shut down a newspaper and suspended its licence after it published a front page depicting George Clooney at the Golden Globes alongside the headline “I am Charlie, too”.

A media court in Tehran ordered the reformist daily Mardom-e-Emrooz, which was in its first month of publication, to be closed down at the weekend because it had shown solidarity with the French satirical magazine Charlie Hebdo following the deadly shootings at its offices.

Iran’s press watchdog, which operates under the country’s culture ministry and Islamic guidance, also suspended the newspaper’s licence on Monday, confirming its closure was due to the publication of the headline as well as Clooney’s picture showing him wearing a “Je Suis Charlie” badge, according to the state news agency Irna.

The Iranian government as well as a number of its senior clerics and officials have strongly condemned the Paris attacks that led to the killings of Charlie Hebdo journalists but at the same time have abhorred its publications of many cartoons showing Prophet Muhammad.

In the aftermath of the attacks, Iranian journalists who wanted to show solidarity with Charlie Hebdo were not allowed to hold rallies in Tehran.

The Iranian government, in particular, has condemned the latest cover of the Charlie Hebdo, which showed a weeping Prophet Muhammad holding up a sign reading “Je Suis Charlie”, saying it was provocative and insulting to Islam.

Mardom-e-Emrooz’s closure came after a number of conservative media outlets in Iran, including Kayhan daily, demanded it be shut down and MPs threatened to impeach the culture minister if no action was taken in response to the Clooney front page.

“If the culture minister does not firmly confront this newspaper, then he would be the subject of an impeachment,” MP Zohreh Tayebzadeh was quoted as saying by the semi-official Fars news agency.

“The closure also points to a wider problem: Rouhani’s failure to expand freedom of the press in Iran more generally. The move reveals enormous divisions within Iran’s political landscape,” it said.

“The battle over free expression has just begun in Iran, with Rouhani and his administration pitted against hardliners, who are deeply entrenched in both parliament and the judiciary. The closure of Mardom-e Emrooz is a reminder of how bitter the fight will be, and illustrates how much power hardliners command.”

My goodness, George Clooney got an Iranian newspaper shut down!

WHAT THEY DID BY CLOSING THE PAPER SO QUICKLY WAS MAKE THEMSELVES LOOK FOOLISH.  THAT THEY COULD LET ONE PERSON HAVE THAT MUCH POWER OVER THEIR ACTIONS.

THEY HAD TO HAVE MORE REASONS THAN JUST THAT ONE, I WOULD HOPE SO ANYWAY.

IT IS SCARY THAT A FEW CARTOONS GOOD, BAD OR INDIFFERENT COULD DO SO MUCH HARM.

WE HAVE ALWAYS HAD POLITICAL TYPE OF CARTOONS IT IS ONE PERSON EXPRESSING AN OPINION.