George Clooney beats British celebrities David Beckham and Daniel Craig to win Male Grooming Icon of 2014 (and even Simon Cowell gets a mention in the top 20!)


There can be no doubt that 2014 has been a stellar year for George Clooney, with the sworn bachelor finally tying the knot with international lawyer Amal Alamuddin.
And, now, topping off a triumphant 12 months, George's decades of unfaltering style have been acknowledged as he is crowned Male Grooming Icon of 2014.
Ever since setting hearts aflutter in ER in the Nineties, George has championed a suave, clean shaven look, setting the standard for silver foxes everywhere, which saw him claim an impressive third of the total votes. 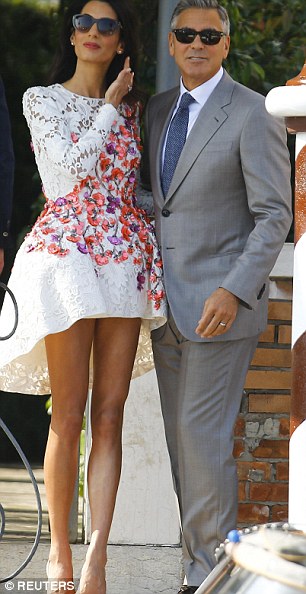 George Clooney has been awarded the title of Male Grooming Icon in this triumphant year for the star which saw him finally walk down the aisle with lawyer Amal Alamuddin
George even managed to topple David Beckham from his usual place atop all UK stylish men charts.
David, who sits at the number two position, who has long led the way when it comes to grooming, championing the hair quiff, fake tan and eyebrow threading over his career.

Other names included in the top ten include noted smoothies Michael Buble and Gary Barlow, at seven and nine respectively, with Sherlock star Benedict Cumberbatch closing the top ten.
Younger stars to make an high appearance on the list include Strictly star Mark Wright at number 15, Robert Pattinson at 19 and Brooklyn Beckham at 22. Romeo Beckham makes an appearance at number 26, showing that at 12 years old it's never too early to start making an effort.
David Cooke, head of men's grooming and personal care at Superdrug, which conducted the survey, said: 'Mr Clooney is a perfect example of modern male grooming, polished and sophisticated without compromising his masculinity.

'What's interesting about this list is that it's older male celebs that lead the charge, with the youngest in our top ten being Prince Harry and Olly Murs both aged 30, and George the oldest at 52. In fact the combined age of our top ten in 399 years old, which perhaps substantiates the old adage about men getting better with age.'
Dave Cooke added: 'Male grooming has really taken off in the last few years, with UK seeing a predicted increase in sales of men's products of more than £20million in the last two years.
'We're predicting 2015 to be the Year of the Man as more and more male shoppers wake up to the long term benefits of looking after their skin and hair. Who wouldn't want to look like George Clooney at his age?'

Introducing the Male Grooming Icons of 2014

Well now there's even more to celebrate in Cabo tonight. Waldo gets some credit too. Actually we all know how little George spends fussing with himself and yet .... If George gets wind of this latest award bestowed on him be and boys will have a good laugh. I would think.

Is the DM fawning over George
a little too much now ?

Just looked at the list without reading the article. Some of these names I don't recognize, but how the f**k does Johnny Depp get on a list that has both words 'best' and 'grooming' in it?

Really good point Way2. Depp seems to be the antithesis of male "grooming". (No offense to Depp fans here). Maybe DM is sucking up a bit to GC. I think his wedding may have contributed to his hitting #1. He was in the spotlight a lot and looked pretty damn dapper in his many suits and shades.

Cucumber thinks George has bad skin and look squidgy up close. Or is he joking?