Here's a sentence we never thought we'd say: Marriage seems to suit George Clooney.
The former notorious bachelor, who wed British barrister Amal Clooney in Venice in September, enjoyed a date night on Wednesday with his stunning wife in Los Angeles, where the couple couldn't help but flaunt their affection for each other.
The good-looking duo, along with another couple, dined at Asanebo Sushi in Studio City and remained at the restaurant for two and a half hours after arriving around 8:30 p.m. Amal looked stunning in a trendy pair of pants teamed with a black jacket and matching booties, while her man looked handsome as always in a navy button-down and jeans.

"George and Amal looked great," an eyewitness tells E! News. "They still have that newlywed glow about them. Amal didn't stop smiling the entire time."
The eyewitness says that the entire group was drinking wine and they even stayed at the restaurant past closing time before the owner walked them out with a giant smile.

"It was a relaxing and comfortable night," the source shares. "It was a group of friends enjoying a night out together and having lots of laughs.
"George is charming and friendly with everyone," the eyewitness adds, noting that it was a "very casual night."

The couple's low-key outing comes on the heels of Clooney's rep denying speculation that the human right's lawyer is expecting. "Amal Clooney is not pregnant," a rep for the Oscar winner told E! News.

Meanwhile, the 53-year-old actor has been busy filming the forthcoming flick Hail, Caesar!, and just last week, he was spotted on set in Los Angeles dressed in a hilarious gladiator costume complete with a Caesar haircut.

Did he put some weight on or does it only look like because of the Shirt he wears.....

They look happy & relaxed in those pictures.
I wonder who the other couple were ?

Did he put some weight on or does it only look like because of the Shirt he wears.....

I think it's a combination of the cut of the shirt and his posture.

On the other hand, Amal seems to be dressing to de-emphasize the thinness of her frame -- the ruffled dress the other day, and now this shirt and the camouflage-patterned pants. She's probably tired of me calling her "skeletal."

But, hey, Amal, you know what works better than clothing? Actual meat on the bones.

A couple more pix from Wednesday night in the Mailonline

Amal Clooney shows off her slender figure in skinny jeans on a date with husband George... after denying pregnancy rumours


She recently denied pregnancy rumours after reports speculated she was sporting a growing bump.
And Amal Clooney put any further claims of her pending motherhood to bed as she displayed her lean physique during a dinner date with her A-list husband George Clooney on Thursday.
The 36-year-old showed off her slender waist and long legs in a pair of chic camouflage print skinny jeans while grabbing sushi in Studio City. 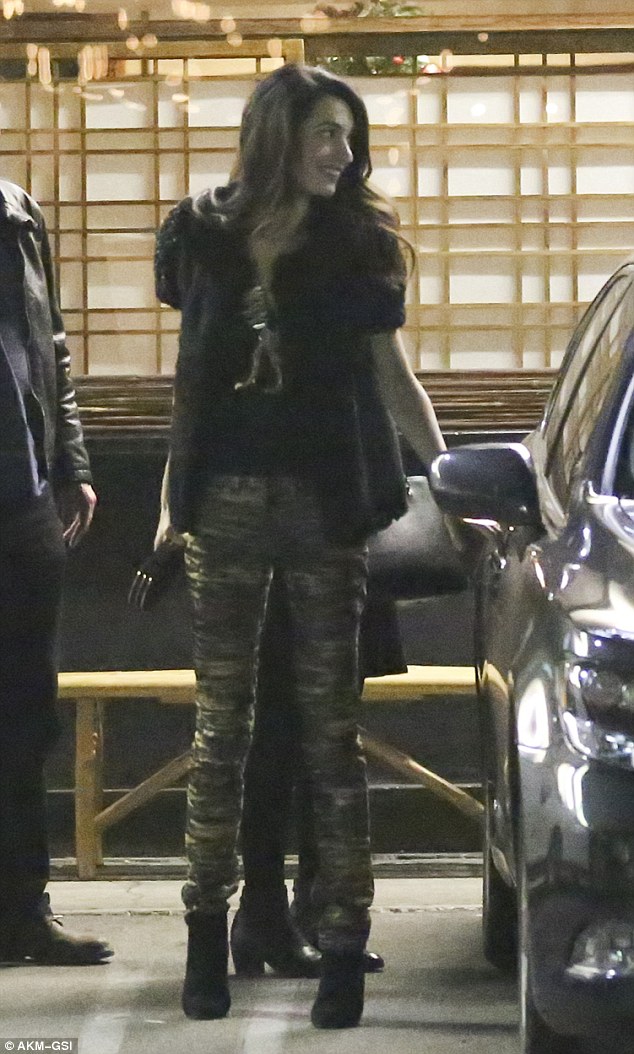 Slender: Amal Clooney put any further claims of her pending motherhood to bed as she displayed her lean physique in a a pair of skinny jeans on Thursday
Amal teamed the casual look with a black jacket, matching black leather booties and a small black clutch.
She wore her raven locks flowing down past her shoulders with a huge smile and accessorized with a giant shiny charm necklace.
Her 53-year-old husband kept it ever-so casual in a navy button down shirt, jeans and leather lace-ups. 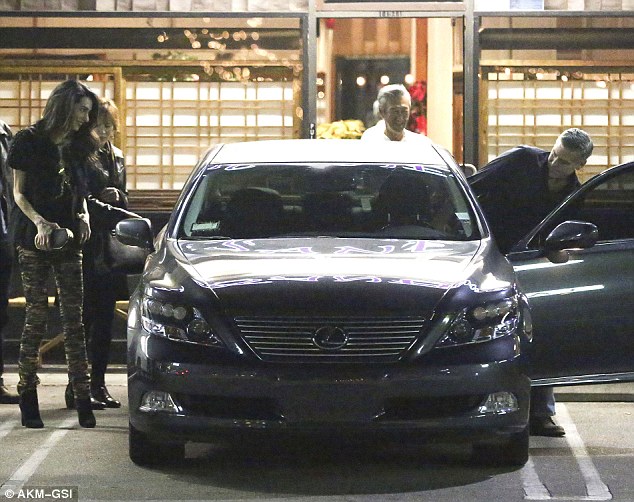 Copy link to paste in your message

Newlyweds: The 36-year-old showed off her slender waist during a dinner date with her A-list husband George Clooney


According to E!Online, the newlyweds were joined by another couple, with the entire group imbibing on wine, reported an eyewitness.
Their romantic double date comes after the couple denied pregnancy rumours by having their spokesperson issue a statement saying: 'Amal Clooney is not pregnant.'
Social media was alive with speculation that Amal was pregnant after pictures surfaced of her at an LA hotspot with what looked like a growing bump. 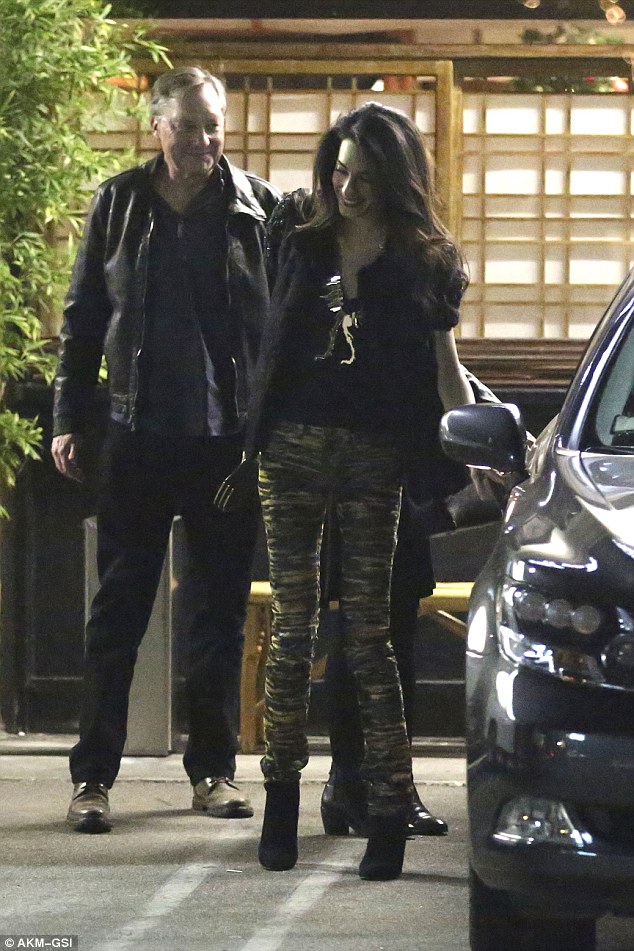 Always stylish: She teamed the casual look with a black jacket, matching black leather booties and a small black clutch 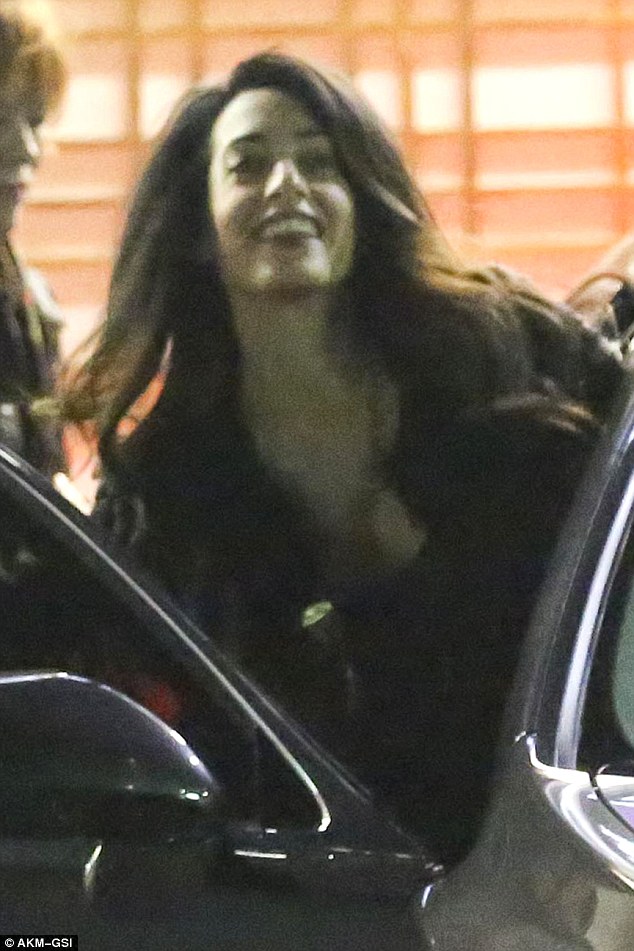 Great spirits: The human rights lawyer wore her raven locks flowing down past her shoulders with a huge smile
With fatherhood not currently in the cards, George is keeping busy filming his latest movie Hail, Caesar!
The Coen Brothers directed comedy deals with a 1950s Hollywood fixer who is trying to uncover the details behind the disappearance of an actor working on a Roman-era period piece.
Set to be released in 2016, the film co-stars Josh Brolin, Channing Tatum and Tilda Swinton.

Looks like the other couple are David and McNally Sagal, parents of Norah who sang at the wedding and in Monuments Men

Wow PAN how did you figure that out? I was wondering who they were. Looks like they both rode in George's car.

I remembered his face from a Norah Sagal youtube clip. She has an amazing voice. He plays saxaphone on some of her gigs

Also happens to be a Harvard graduate and an attorney at Warner Bros.,.... and his wife and sister are actresses on tv I think

And look what I just found on youtube, released two weeks ago. George and Amal's wedding songs:

They're lovely.....she has a great mature
sounding voice.....very relaxing too.