As it's my bed time here in UK I'd like to
wish everyone across the pond....or wherever
you are tomorrow......
A Very Happy and Peaceful Thanksgiving

Hey, happy Thanksgiving everyone who's celebrating! And happy Thursday to everyone else.

The Week 5 hrs ago theweek.co.uk

The first human trial of an experimental Ebola vaccine has delivered promising results, according to the US National Institute of Health (NIH).

"On safety and on the ability to produce an appropriate immune response we can call this trial an unqualified success," Dr Anthony Fauci of the NIH told the BBC.

However, he stressed that this was only the early part of the first phase of the trial and much more testing was required to establish the vaccine's long-term safety and efficacy.

There is currently no vaccine or cure for Ebola and the unprecedented scale of the current outbreak in West Africa has prompted pharmaceutical companies and health organisations to fast track the development of safe and effective treatments.

The vaccine has been jointly produced by the NIH and the British pharmaceutical company GlaxoSmithKline (GSK) and is one of three currently in development.

In the first phase of the trial, all 20 American volunteers who received the vaccine developed antibodies to the virus and none suffered any major side effects. However, some patients did develop a fever in response to the drug, but it "resolved within one day", according to scientists.

GSK has reportedly made a request for an indemnity agreement to protect itself against unforeseen side effects that could develop in the future.

"It's important to remember that these data are the first piece in the jigsaw and we're continuing to gather other important information," Dr Moncef Slaoui, chairman of global vaccines at GSK told The Guardian.

If the results of the following phases of the trial are positive, thousands of volunteers, including healthcare workers, will receive the vaccine in West Africa in early 2015, he said.

Almost 5,700 people are known to have died from the disease and almost 15,000 have been infected across the region, though actual figures are believed to be much higher. ·

Qu'est-ce que s'up? to everyone else.

I'm headed out for a walk to pre-burn some calories.

Quiet on here today. I guess you're all in a turkey coma?

Can you describe your desert???? Just to make sure if I really want to come

Is it true that you eat your Turkey with Cranberry Sauce????

Definitely cranberry sauce.  To omit it would cause a riot.

@Katiedot wrote:Quiet on here today.  I guess you're all in a turkey coma?

I know I am.  Ate WAY too much yesterday.  But it was all good!

A wee while ago I looked outside and was surprised to see that the house across the street had Christmas decorations in the upstairs and downstairs windows..... Santa, a snowman and flashing coloured lights. I'd have thought they could have at least waited a couple of days until is December.

Oh Christmas lights everywhere....I like to see the news as they Show sometimes how craszy the americans get with they Christmas lights. There are houses completley covered with lights and the garden too.....Crazy funny 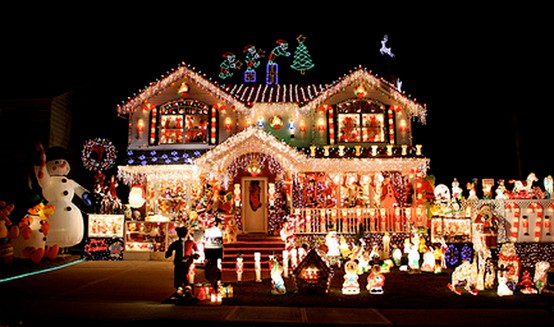 I got a flu

Poor Nicky. Do you have an Irish flu?

Nicky, that stinks! Stay nice and warm, drink lots of tea and eat lots of chicken soup (it really works!). Maybe one of George's movies will help? Hope you get better soon.

Get well soon Nicky.....have you seen a doctor in case you need antibiotics ?

As to the holiday decorations, many people put them up over the Thanksgiving weekend because it's a long weekend for most .  (Not retail of course, but many other companies close on Friday also to give their employees the long four day weekend).

Which of course, many use to travel to see family.  Too bad it was snowing so much the day before Thanksgiving!

thanks guys... after 2 litre of hot tea I will take my hot water bottle and tissues and go to bed and cuddle my pillow.

Lizzy, I bought chicken soupd today. Will be my meal for tomorrow

you need a Hot Toddy, that will get rid of all the horrible flu bugs

Rose hips tea would be good .

Nicky80 I hope you're on the mend and feeling better

@Donnamarie wrote:Nicky80 I hope you're on the mend and feeling better

Thank you yes i do. Which surprised me. Last night I was caughing a lot but today i felt much better and my nose is only blocked on one side and not both sides anymore

Today I bought a lot of apples.....My plan to eat one apple a day. And in the morning i continue to drink a half pressed Lemon and Piece of Ingwer with hot water. And I bought healthy granola for my morning breakfast AND a healthy Protein Snack during the day.

Nicky,
Glad you're feeling better.
Go to the drug store and get some normal saline nose spray ( also called ocean water). You  can get it over the counter ( no prescription needed) The doctors around here swear by it. It's cheap, and it works like a charm.  Good luck.

by the way...what I always wanted to say to the Americans. I realy love that you Name a pharmacy a drug store.

When I learned English I learned that the word drug referes only to the bad drugs like heroin and cokes and other bad drugs. So always when I hear "drug store" It makes me laugh....it sounds like all Americans are drugs addicted.

Like the dutch People when they go to the "coffee shop"

Well Nicky sounds like you're doing all the right things to get back on your feet. The nose spray does work well but I do think a shot of whiskey, like Silje recommended, couldn't hurt. And The Good Wife will keep your mind off how terrible you feel. Sounds like you're getting caught up with the show. There wasn't a new show on Sunday and it may not be on this Sunday either. I really miss it when it's not on.

Did season 6 already started in the US or are you still at season 5? Just to check how much I have to catch up hehe

And yes Whiskey sounds great...For Christmas we got lot's of Christmas chocolate with alcohol in it. I'm sure I find some with Whiskey

I'm sure that counts hehe

Nicky I believe this is the 6th season that is currently on TV. I could be wrong. I lose count and sometimes confuse it with Downton and it seasons on air. Someone else here who watches it's might know for sure.

Yea some chocolate with that whiskey would be da bomb!!!