Juliette Lewis. George Clooney. What else needs saying? Thanks to Henway for the link

The badass star of films like Cape Fear and Natural Born Killers opens up about her memorable roles, new film Kelly & Cal, and her Scientology conspiracy theories.

“Isn’t that nutty?” says a chuckling Lewis. “It’s in the vein of True Detective, about two cops solving a murder case over the course of 10 episodes.”

It’s one of several upcoming projects for the refreshingly unique actress who, in recent years, had been focusing a bit more on her musical efforts (first, as front woman of Juliette and the Licks, and then a solo artist) over acting. There’s also her role alongside Aaron Paul in the indie flick Hellion, the anticipated Jem and the Holograms film, and her turn in the upcoming Fox TV series Wayward Pines, also featuring Matt Dillon, Melissa Leo, and Terrence Howard, which Lewis says is “very Twin Peaks-y.”

But first comes her excellent turn in Kelly & Cal, opening in theaters Sept. 19. Directed by Jen McGowan, the film stars Lewis as Kelly—former singer for the punk group Wetnap who experiences an “existential crisis” when she gives birth to a child. Fearful of her transition to boring suburban mom/wife, she strikes up a strange relationship with Cal (Jonny Weston), her 16-year-old neighbor in a wheelchair.

Lewis candidly discussed her career, the legacy of Natural Born Killers, why the mainstream media will never give Scientology a fair shake, and much more.

There seems to be a lot of you in the character of Kelly.

Well, I guess Jen McGowan and the writer, Amy Lowe Starbin, said that they had me in mind, but they don’t know my pain, and they don’t know my inner struggles. Even though I’m not a new mother like Kelly is, I was going through a similar existential crisis. It’s gotten better, but I guess I’m still going through it—where you question all the things that drove you when you were younger and how those things aren’t going to sustain you in mid-life, and you find yourself reflecting, and feeling lost.

What were you struggling with?

I think the big thing, for me, is facing my parents’ mortality. That is horrifying, and I’m still dealing with it. There’s just so much wrapped up in it. My Dad is older and has Alzheimer’s and Parkinson’s, and it’s taken me seven years to accept it—and I still haven’t accepted it. I was going through that, and with my band, I’d been playing music for six years, but I realized that I still loved acting, storytelling, and characters, so that was doing my head in because I didn’t know how to balance both. I was struggling to strike a balance.

Hollywood can be unwelcoming to women as they age. Did that very unfortunate reality factor in to your struggle?

With age, there’s definitely that stuff. But I don’t think so, because I’ve tried to stay pretty disengaged from the politics of Hollywoodism. I’ve always been an outsider. I’ve always been attracted to roles that would challenge me, and that wouldn’t come around very often. I sort of got lucky in that I was able to carve a niche for myself. I haven’t made a career off my looks, thank God, but hopefully how I’ve moved people emotionally, the directors I’ve been able to work with, and the stories I’ve been a part of.

There is a great in-joke in the film where your character is pleasuring herself to George Clooney’s Rolling Stone cover, and of course you two starred in From Dusk Till Dawn together.

You probably don’t get enough credit for this, but you’re a Cassandra of sorts when it comes to starring in movies with future A-list hunks on the cusp of superstardom. There’s Brad Pitt in Kalifornia, Johnny Depp in What’s Eating Gilbert Grape, Leonardo DiCaprio in The Basketball Diaries, George Clooney in From Dusk Till Dawn…

Yeah, this is now part of my history that I can say we all came up together—Brad, Leo, Johnny Depp, George Clooney. It’s so funny. I try not to be cynical about Hollywood, but I remember that George’s first lead was From Dusk Till Dawn and, since he was coming from television, the studio was questioning, “Well, can he be the lead in a movie?” And you’re thinking, “Dude! Are you kidding? Have an imagination!” It’s amazing to think that it was even a question.

You’re a Scientologist. What do you think are the biggest misconceptions about Scientology?

I’ll get all conspiratorial on you, and I’m just going to throw this out: The mainstream media is funded by pharmaceutical companies, so when you have the biggest movie star in the world at the time—Tom Cruise—coming out against anti-depressants and Ritalin and just saying, “Hey, why don’t you put a warning label on there?” The thing about Scientology is it is anti-drug in that you’re seeking relationship or communication tools—simple basics on how to live better. So, when Tom came out about that, I’ve never seen someone get torn down so hard, and they still brutalize him with Scientology pieces to this day. It’s a religious philosophy and self-help movement. And you’ll never see a truthful word written about it in mainstream media.

Now, many of your films have aged really well, which I think is the true barometer for success.

Although you did cover some PJ Harvey songs in Strange Days.

How amazing is that? It was Kathryn Bigelow who directed that, and she is who hipped me to PJ Harvey. I didn’t know about her until Kathryn introduced me.

Your first big splash was in Cape Fear, and that auditorium scene between you and De Niro is beyond creepy to this day.

It is creepy. I remember watching it with an audience and someone from behind me was going, “She’s so dumb!” They were so upset at the character for standing there and chatting.

I read that you developed a crush on De Niro during the making of Cape Fear?

Well… look at him. He’s beautiful. All sun-kissed from the Florida sunshine… But I think it was more of a creative crush. I had someone who was treating me as an equal, and I cannot tell you enough how important it was working with De Niro and Marty. They validated my instincts and I was all instinct—because I didn’t go to any acting school. That was just fuckin’ magic.

Looking back on Natural Born Killers, there aren’t too many female protagonists like Mallory Knox. She’s just a pure badass who is every bit Mickey’s equal.

I think she’s more “weird” than “badass.” I wanted to fill her with pain and primal rage, which was really fun for me. I love talking about that movie—especially in hindsight, because I didn’t appreciate it enough at the time.

It was pretty shrouded in controversy, with a bunch of “copycat” murders having been blamed on the film. Then, the victims’ families sued the makers of the film which was backed by author John Grisham, who said, “The artist should be required to share responsibility along with the nutcase who pulled the trigger.” Thankfully, the case was thrown out.

That is a lawyer’s wet dream. If you could place blame on entertainment for all the crimes people commit, you’d be in court all the livelong day. With Fatal Attraction, you could say, “Oh, this girl got stalkerish because she saw this movie.” We were all lumped into the same club, along with Marilyn Manson, and the annoying thing about it was that they were missing the layers of that film and really walking into exactly what Oliver [Stone] was saying: “Look at what the media does—it makes mythical front-page stories of the killers, not the victims.”

I love that movie. I got to do street fighting and shoot all these guns before I got the part, and I’d never shot a gun before. Now, people think I’m all violent when I’m quite the opposite. Oliver was so funny. He didn’t tell me for months that I’d gotten the part and he’d call me into his office and say, “I want to see you do pull-ups,” and he’d put a pull-up bar in his doorway. I want to say I got to about 10 pull-ups… but I probably only got to seven!

Did she play the young girl in FDTD ?

Thanks Katie.....she had a certain "worldly look"
about her then, as I remember.
She's certainly got an interesting face now,
IMO of course.

Yes, interesting Joanna.  This was her and Brad at an Oscars, I think. 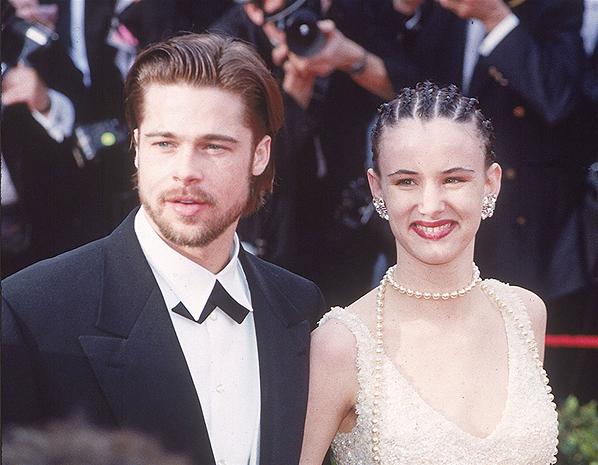 Juliette is an interesting actress. I forgot a lot of her earlier work, like Gilbert Grape, Kalifornia, From Dusk Till Dawn, Cape Fear, Strange Days. Haven't seen those films for a real long time so I didn't remember she was in them.  I didn't remember her singing in Strange Days either.  The one film I will always remember her in is Natural Born Killers. I love her and Woody Harrelson as Mickey and Mallory Knox.

I didn't know she dated Brad Pitt. Juliette Lewis, Gwyneth Paltrow, Jennifer Aniston and Angelina Jolie; Brad sure has dated quite a few famous actresses. Interesting that fellow A -lister GC has avoided that completely except for Renee Zellweger.