Hoping any COHers in Nor Cal are okay.

The earthquake hit at about 3:30 a.m. near Napa which is North of San Francisco

(CNN) -- A 6.0-magnitude earthquake struck Northern California early Sunday, the U.S. Geological Survey said.
It was the strongest to hit the Bay Area since 1989, when a quake struck during the World Series.


Sunday's earthquake struck 4 miles northwest of American Canyon, 6 miles southwest of Napa, and 9 miles southeast of Sonoma, according to the USGS.


"I've got a lot of broken wine, being here in Napa," said Emily Massimi, who was woken up by the quake. "We tend to collect wine, so I have wine all over my kitchen, and glass, and pictures off the wall and books off of bookshelves," she told CNN.


There were no immediate reports of injuries, but 15,000 customers in and around Sonoma, Napa, and Santa Rosa lost power, according to Pacific Gas and Electric Company 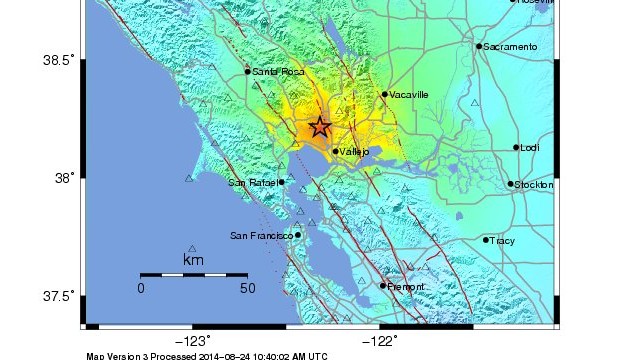 "The refrigerator flew open and all the food fell out," said Karen Lynch, who lives in downtown Napa.


"Everyone is outside. Everyone is checking on neighbors. This is a close community, everyone wants to help."
CNN affiliate KTVU reported a church in Vallejo was heavily damaged and lost its bell tower.

"It was not like other quakes we have felt," Lynch told CNN. "This was a violent quake, jolting us to and fro."

There have been two aftershocks so far, according to the USGS, one registering at 2.5 and the other a 3.6 magnitude.

A dispatcher for the Napa County Sheriff's Office said there was some water damage.

Just saw that in the news....lot of big damages really scary.....

now everyone talks about the "big one" again....

If the "big one" ever happens will that go through whole California or only in the San Francisco area?

It will depend on where it actually happens.  There are numerous earthquake faults that run up and down California so a "big one" could happen anywhere.  6.0 is a pretty substantial earthquake.

I think if it had hit in a more populated area, like the middle of San Fransisco or downtown Los Angeles, it would have major ramifications.

I was here during the Northridge earthquake which was 6.7 magnitude.  I live about 30 miles away from that area and I remember actually getting a feeling of seasickness because the ground was moving so much.  It was like being on a boat in our area.  But near the epicenter I heard it was violent shaking.

So damage depends on where it's centered, how many people / businesses are located in the area and also how old the building are and whether they've been earthquake retrofit or not.

After I heard about the earthquake this morning I went out and bought cases of bottled water and canned foods as it was a good reminder that you just never know when one will hit.

But I'd rather be here in California than somewhere in the midwest where they have tornadoes.  The fact that we have had earthquakes before and we have stricter building codes now - plus personnel who train constantly for earthquake preparedness = I just feel better about being here than in tornado alley or even in places that have frequent hurricanes.

Lorna - I'm glad you weren't in the quake zone. Hope all your friends and family are ok.

We had a very small earthquake here about a year ago - the first I ever remember - and it only lasted a minute or two, but it was kinda scary and a very strange sensation. I love California, but I wouldn't want to live with the threat of earthquakes on top of the other problems you guys have (drought, mudslides, fires). Seems there's a price for living in paradise.

I have some friends in N. Cal but they don't live near Napa so they probably felt it but should be okay.

We have little quakes every day all over S. Cal but that doesn't' mean I feel them.

Except for the drought, living here is very nice. It's been a bit hot this year but for the most part it's a dry heat so not so unbearable as if we had humid weather.

I guess the nice weather is worth any risks from earthquakes.

LornaDoone wrote:So damage depends on where it's centered, how many people / businesses are located in the area and also how old the building are and whether they've been earthquake retrofit or not.

Lorna is your home earthquake retrofit???

How does it work when you look for a home in California which is earthquake retrofit....Do they need to show you a license as proof????