But Melbert he also has said he never thought about getting married again. People change. However there is nothing wrong with NOT wanting children. I lean to the belief George got snipped.

Totally agree with you Melbert.  However, he is not the only one in this relationship.  I think it will be depend on whether she wants kids--lots of men give in if the woman is desperate to be a mom.

I think that none of them wants children

Considering how much they both have invested in their careers, I think Doug Ross may be right. What's the point in having children if you're BOTH going to be absentee parents?

For me, it's a right and wise choice to not have children, comsidering how much they love their jobs.

@theminis wrote:Sometimes you have to hide the salami a few times before theres a tada!!!

Tada, traslate for me, thanks

may have been caught, then you think that Amal and her family are from the east, perfumes, incense, belly dancing and the pea toh George goes haywire

@theminis wrote:Sometimes you have to hide the salami a few times before theres a tada!!!

Tada, traslate for me, thanks

@lelacorb wrote:may have been caught, then you think that Amal and her family are from the east, perfumes, incense, belly dancing and the pea toh George goes haywire

Little confused here lela. To whom are you responding? I must say you do bring up an interesting visual but I'm confused since it seems you're responding to someone else's comment but I can't figure which one.

Amal Alamuddin Is Not Pregnant—Sorry, No Baby on the Way for George Clooney and Fiancée

George Clooney and Amal Alamuddin are busy preparing for their wedding...
And that's it.
Alamuddin is not pregnant, Clooney's rep tells E! News.
So there you have it, all you bump-watchers out there who never met a woman in a maxidress that didn't make you wonder. Clooney and his fiancée have been the subject of tons of are-they-expecting speculation and more than a few magazine covers —seemingly just based on a few pics of the wind blowing through Alamuddin's dress!
In fact, the so-called evidence seemed to have disappeared by the time she visited Clooney on the set of the Nespresso commercial he was shooting in Italy a week ago. (Memo to the bride: She might just want to stand up a bit straighter, perhaps to avoid this rigmarole the next time around.)

Meanwhile, it's not as if the happy couple don't have enough on their plates in the meantime.
A source told E! News this week that Clooney has been "very hands-on" with planning their  "small and intimate" wedding , which is expected to take place relatively soon in Lake Como, where the Oscar winner has long kept a home, Villa Oleandra. A portion of the celebration will also be in London, a two-locale destination wedding being so chic among the celeb set these days.

"George has always loved Como, he finds it very peaceful and relaxing and now Amal has fallen in love with the area as well," an insider told us. "They want to start their married life there with the beautiful lake as a backdrop. George's home on the lake is like a very well-oiled machine. He has the local mayor fully on his side and the locals, too, and he can ensure that press and paparazzi are kept away." 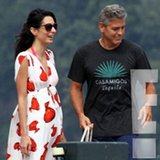 "(Memo to the bride: She might just want to stand up a bit straighter, perhaps to avoid this rigmarole the next time around.)"

Come on ladies.....lets get UNITED against this
unbelievable rubbishy instruction from a nobody !

She DOES slump which makes her belly protrude. At face value, it is constructive criticism..

That's as may be. Would that we could see the posture of the writer!

And I don't think her other half gives a *!

I'm really quite naive/dumb/ignorant about gossip
writings/magazines etc etc.....but every now and again I come across a headline online or on the cover of a waiting room magazine that has always puzzled me.

Can anyone give me a rational explanation for the obsession of declaring...."So and so is pregnant !"
whenever there's a new coupling of a celebrity or celebrity wannabe or who ever.

Is it because they can't/won't print the headline....
"So and so is fucking so and so ?"

So by declaring a pregnancy they're just  announcing that a couple are doing what couples do when in love.

Nah, I think it's more wishful thinking.  If they post the headline and then it becomes true they can say they had it first.

Hell, then I guess I could make up a headline -George and Amal adopt a baby from Sudan.

Total bullshit of course, but if they then adopt a child (even if not from Sudan) I could say I had it first.

And of course making that declaration does sell more rags for them!

For me, all of the projects George is lining up is proof Amal is pregnant. I can't imagine him filling up 2015 with work if he was going to be a dad.

There are times when George looks like he couldn't even pick up a baby. No running around with the kid, no playing on the floor... what's he gonna do, teach a toddler to scout locations and do storyboards?

These are two very busy people - at least, George is; I have yet to see evidence of it with Amal - who wouldn't be doing themselves or a baby any justice.

Anyway, it's still my guess that George took the clippers to his man-tubes. If Monika or some other famegrabber didn't nail him with paternity, there's no powder in his bullets.

Way2Old - Much as I would love to see a slew of little Clooneys running around, I tend to agree with you. If he hasn't been snipped, he's been VERY, VERY lucky! 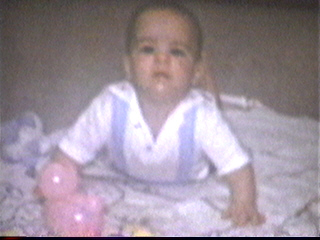