Thanks for posting the family picture. They look nice together. I think it is great to see him and his sister together

I can't see the photo

Hi Doug, the photo has been removed at the request of the person who originally posted it

@theminis wrote:Hi Doug, the photo has been removed at the request of the person who originally posted it

Oh, and could you tell me where I can see it?
I'm curious now

55 minutes ago
Had a great weekend in Augusta during Art in the Garden with George Clooney making an appearance at the Rosemary Clooney Museum & lots of shoppers at Rose Hill Boutique! Btw... Look how tall my daughter is getting!... So crazy!#kygirl #kyproud #rosemaryclooney#georgeclooney #augusta 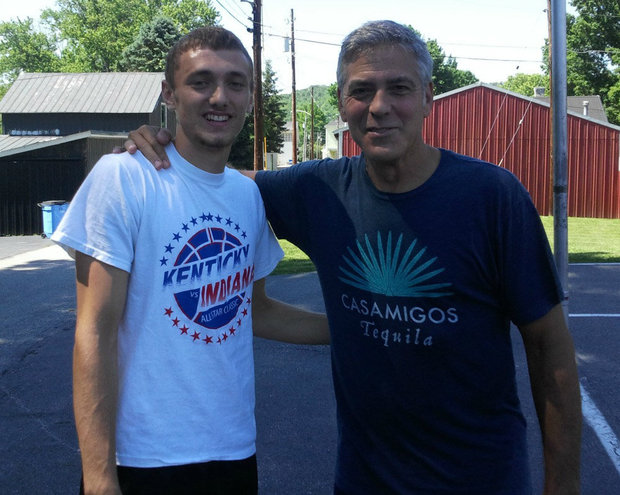 
Clooney was in Augusta for a family reunion and wandered over to the basketball court behind St. Augustine Catholic Church and school where Bach and some buddies were playing.


Clooney went to high school with Brent's parents — Mike and Laura Bach — so he knows the family. He chatted with Brent about Augusta knocking off Mason County in the district semifinals for the second year in a row. "He told me he was proud of me and everything we did for the school and the town we represented," Bach said.


Bach, who will play college basketball at Bellarmine, didn't challenge Clooney to a game of one-on-one, but he did get a chance to size up the movie star's game. "He's got an all right jump shot, and he's in shape," Bach said.


Clooney kidded Bach about which of them is Augusta's No. 1 basketball alum.
"He tells me he's still No. 1, and I'm not going to argue," Bach said with a laugh. "He's a really good guy."


Clooney, for the record, averaged six points his senior season 35 years ago, and Augusta went 1-26.
Bach averaged 31 points this season and led the Panthers to a 20-12 record.

I got next, George.

great place they have to play!!

George Clooney Is "Still the Same Old George," Plays Basketball With His Prom Date's Son—All the Details!
by BRUNA NESSIF and Senta Scarborough Mon., Jun. 16, 2014 2:13 PM PDT
Not only is George Clooney handsome, talented and intelligent—he's also humble and has tons of school spirit (cue pom-pom shakes for Georgie!).
The 53-year-old A-list actor was spotted shooting hoops recently in his hometown of Augusta, Ky., and was joined on the court by Brent Bach, a recent graduate and career-leading scorer at Augusta High School, who also just so happens to be the son of Clooney's prom date!
"Guess who just called me and ask if Brent could come to St. Augustine school and play basketball? My old friend George Clooney," Laurie Laycock Bach wrote on Facebook with a photo of the duo.
"He said he had kept up with Brent's basketball and was very proud of him and wanted to play him a game. Still the same old George!! It was nice that he called to say hello and to talk about Brent. He said he was going to keep up with his college games too."

The 18-year-old point guard will be going to college at Bellarmine University in Louisville to play basketball in the fall, and tells E! News that Clooney wanted to tell him how proud he was for leading his alma mater to back-to-back district championships.
"He said, 'Let's get a photo,' and so we did. He told me he was proud of everything that I had done [for the basketball team]," Bach tells us. "I did a lot of great things for the team. I led our basketball program to back-to-back district championships. I'm the all-time leading scorer in the history of the school. I knew what he meant when he said that to me."
Brent added that Clooney and his father have kept in touch via email, and that the celeb was keeping track of his basketball career that way. "He said he was proud of me and everything I had done with basketball and told me to keep trying to do everything well and keep chasing my dreams," he said. "He patted me on the back and then ran up the road."
Clooney was in town for a family reunion, and while the "jokester"—as Brent describes him—is very successful and famous, it's his down-to-earth attitude that encourages Bach.
"I've always looked up to him. I would love to live his lifestyle. He is a really good role model. He has all of this success and he gives back and I think that is a very good thing and I would like to be like that. I like the things he does around the world. I want a lot of success and money and I want to give back and help people when I can. He just didn't do this all on his own," Bach tells E! News.
"He is really down-to-earth and he is really nice. Being a big movie star, when he comes back to the town where he grew up, he treats us all the same and we treat him like he is just an ordinary guy and I think that is what he likes about coming here," he adds. "Even though we don't get to talk as much, he is a good guy and he tries to keep in touch whenever he is in town. He is a regular guy and I'm really thankful that I got to meet him."
http://www.eonline.com/news/551586/george-clooney-is-still-the-same-old-george-plays-basketball-with-his-prom-date-s-son-all-the-details

I love that people who know him since childhood or young age tell that he is still the same,

Down to Earth.
It´s one of the things that I love most about him. Humility.

I post the pictures here as well which were also posted in a different thread as it is the same event. But two different topics that why those threads will not be merged. 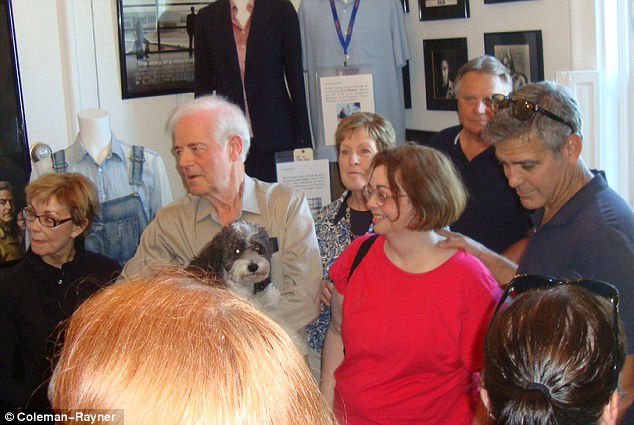 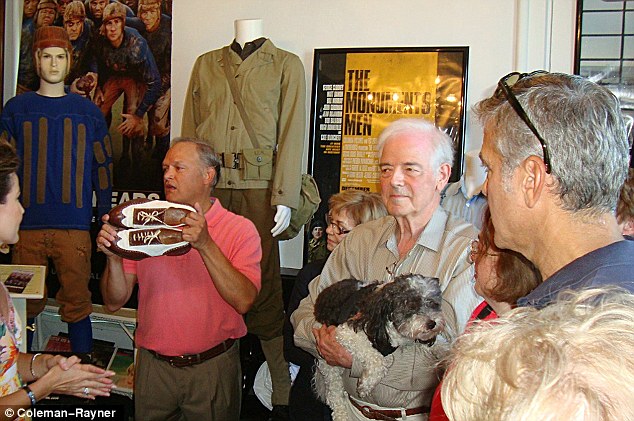 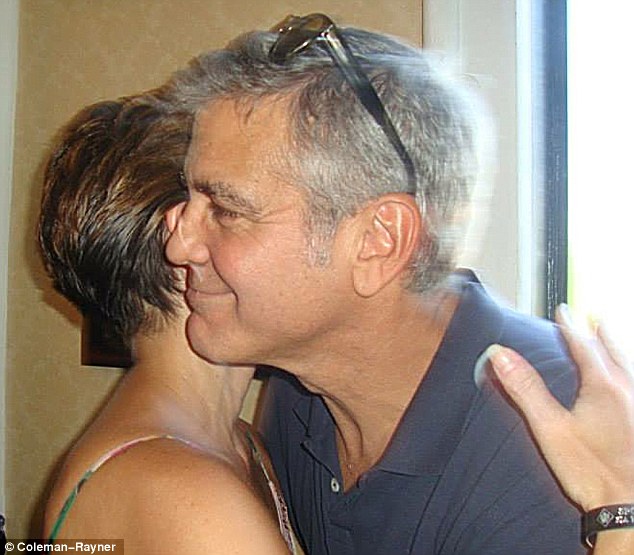 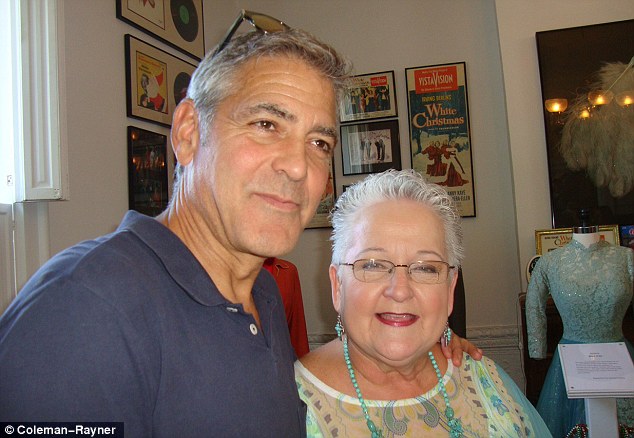 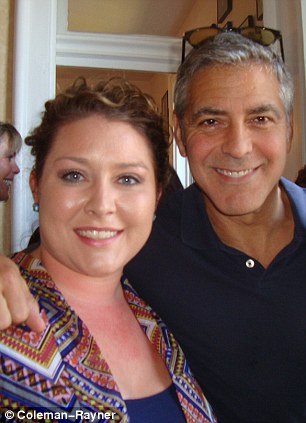 I think my medication needs to be adjusted... more mental confusion.  George is at the Rosemary  C Museum- donating stuff from his movies?  Why?

Second thought- though not sure where to slap this puppy.  Stanley is falling behind the switch- no new Phase II info, making the press resort to running old stories ( Migel's opinion of wedding, etc), things that happened ages ago.  If Stan doesn't get on the stick, the public is going to lose interest in this wedding long before it happens.  Opinions, thoughts, grumbles...

Those two pictures of George and his immediate family are lovely and they portray their closeness.
I'm pleased to see the doggy is included too.

I don't think the public is interested in George's wedding....just his fans.
Oh and the journos of course....in order to make money.

But of course, to state the obvious, a wedding only really means something to the bride & groom, their family and close friends, no matter who they are.

Yes I love that dog .

Kentucky trip a couple of months ago 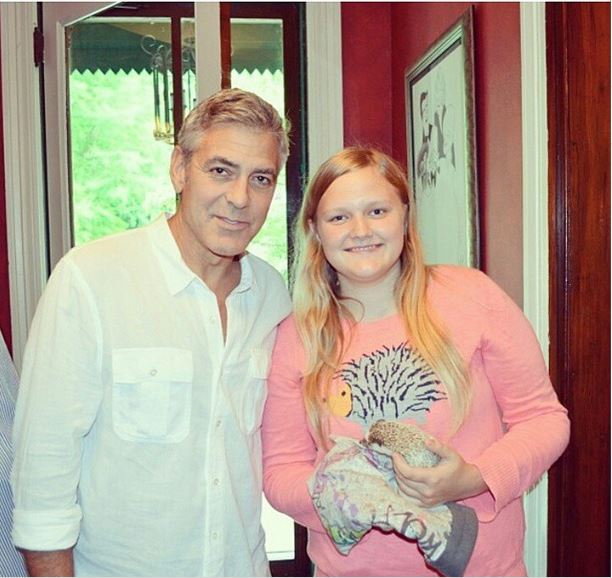 Love that Party A! and she was holding a hedgehog too!!! They're both so sweet, with little feet, slightly prickly with big brown eyes!!!!!  Ahhhhhh!!!

@fluffy wrote:Love that Party A! and she was holding a hedgehog too!!! They're both so sweet, with little feet, slightly prickly with big brown eyes!!!!!  Ahhhhhh!!!

Are you referring to George and the hedgehog "having prickly feet
and big brown eyes" fluffy ??

Hmm...interesting analysis of our man.

As this belongs to the family reunion trip and we have already different fan meeting occasion in this thread I merged it together. Hope it is ok.

Great find  by the way