Just found that one. I only copy the picture with george but if you click on the link you see many other pictures with other stars he met 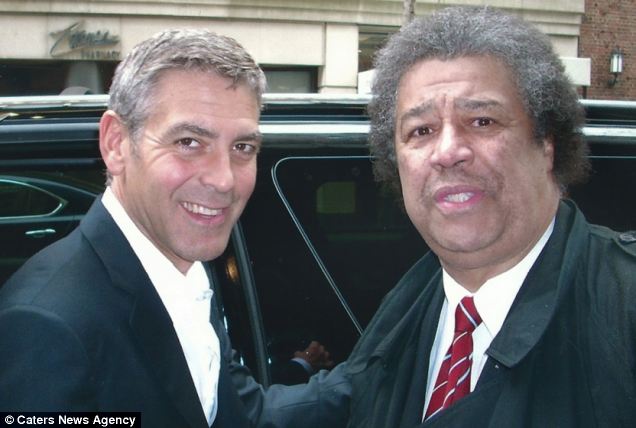 'George Clooney, Muhammad Ali and Grace Kelly...now I just want a picture with Obama': Meet the world's biggest star spotter who has been photographed with 5,000 famous faces

Meet the world’s biggest celeb spotter who has had his photo taken with over 5,000 famous faces.
Over the last 50 years, celebrity hunter Gary Watson, 67, has trawled the globe in search of the world’s biggest A listers and has been photographed with everyone from John Lennon to Nelson Mandela.

The former policeman, who refers to himself as ‘The World famous Gary G Watson’ was first inspired to become a celeb spotter after meeting the late Martin Luther King Jr in New York City when he was 20-years-old.
Mr Watson did not have a camera with him on the day he met Mr King and vowed that he would always carry one in future to capture those historic moments.

He talked his way into every star-studded event he could and spent hours waiting outside hotels and conventions in his search for famous faces.

At first his unusual hobby was met with looks of bemusement from paparazzi and news reporters alike. But it soon earnt him some friends in high-places and it wasn’t long before he was getting tip offs and event tickets with access to the hottest names in showbiz.

Mr Watson now has a collection of over 5000 photographs of himself with celebrities including the likes of Muhammad Ali, Al Pacino, Robert De Niro, Michael Jackson, Bill Clinton and George Clooney amongst thousands of others.


He said: 'When I first started taking my picture with celebrities, the paparazzi thought I was crazy, but I showed them a different way of doing things.

'Some of them noticed that I had a way of stopping celebs in the street, so they would let me through the crowds as they knew they would be able to get their picture if I got a chance to speak to them.'

'They were all there in the hope of taking a picture they could sell but I wanted something truly unique, something that would set myself apart from all the photographers and that I could call my own.

'Many of their photographs were missing an important human element that you just can’t reproduce, my pictures really capture the happiness of the moment.'

Mr Watson puts his success with the stars down to his open, friendly and most importantly polite nature. He says he always dresses in a suit for his celeb encounters as a sign of respect.

From his humble beginnings, Mr Watson has managed to talk his way into some of the most exclusive celebrity events on the planet including the 1978 Academy awards, the Night of 100 Stars on three separate occasions, the TONY awards 11 times and was even given tickets to the 1985 Grammy Awards by iconic crooner, Frank Sinatra.

His obsession with the rich and famous first began as a child growing up in New York City and used the local movie theatre as a way of escaping the domestic violence he would encounter at home.

It’s fair to say that it wasn’t long before Mr Watson fell in love with some of the classiest and coolest characters the silver screen had to offer and even emulates his own appearance on the UK’s slickest super spy, James Bond.

However, rubbing shoulders with the stars doesn’t come easy, and Gary has spent hundreds of hours waiting outside various hotels and conventions for that once in a lifetime opportunity, not to mention the thousands spent in travelling costs.


But despite Mr Watson’s astonishing super star line up, he admits there’s a few big names missing, such as President Barack Obama, actor Christopher Lee and actress Sandra Bullock who he vows to one day meet to complete his phenomenal portfolio.

He said 'I have met a lot of people in my time who have had thousands of pictures with celebrities but I have never seen or known of anyone that can compete with my collection.

'What makes my collection so unique, is its diversity, I have met some of the most iconic people on the planet from all walks of life, some of which some are sadly no longer with us.

'I want to prove to people that many celebrities are just genuinely great people who are more than happy to talk to their fans, but it is all about how you approach them.

'If they can see you are a genuine fan of their work and you are friendly and polite and come looking smart and respectful that holds a lot of weight, first impressions count.

'I will talk and hold a conversation with anyone from, I am never intimidated by their fame as I believe it’s fans like me that have helped shape their careers.

'Sure there is a lot of time waiting outside hotels and at conventions and sometimes I even walk away empty handed but I just think ‘I’ve got to try just once’ otherwise it’s an opportunity I might never get again.'

He added: 'I feel lucky in that I’ve connected with something that I have genuine passion for, I come alive when I talk about my hobby and as people pass away my photographs remind me how special these moments were and how lucky I was to meet people who were at the top of their chosen field.

'I’ll carry on having my picture taken with extraordinary people for as long as I possibly can, it keeps me feeling young.

'There are still a few who have slipped through the net over the years, I think I’d most like to meet President Barack Obama, he’s the top guy on my list.'

Watson, who lives in Philadelphia, is writing a book outlining his success.