» Nina and Nick Clooney out for lunch in Augusta

» Interview and video with George in Laglio about the floods

+3
silly girl
it's me
Joanna
7 posters

Lots of lovely pictures at link.....he looks like his Grand father, Prince Charles,
when he was a baby !

Prince George took his first major royal engagement entirely in his stride, or in his crawl, to be precise, as he joined 10 other babies at the world’s most exclusive playgroup.
The eight-month-old showed that he has become mobile a full month earlier than his father did, as he crawled around a plush carpet littered with toys.

The playgroup was organised by The Royal New Zealand Plunket Society, or Plunket for short, which provides free parental support services to more than nine in ten babies.
In years to come the future king will look back on this laughter-filled event as the moment his life’s work began. There will be many thousands more public engagements to come, but few will be as relaxed and laughter-filled.

The Duchess, wearing a Tory Burch dress, carried Prince George on her hip as she chatted and giggled with other parents about their shared experiences of bringing up babies.
And where fashion-watchers are usually obsessed with the Duchess’s outfit, it was Prince George’s smart navy blue dungarees that were attracting more interest on Twitter.
The Prince wore a £75 pair of “sailboat smocked dungarees” by the British designer Rachel Riley over a white T-shirt, with soft blue pre-walking shoes.
The babies chosen as George’s playmates were as politically-correct a collection as New Zealand could muster.
They included the daughter of two gay fathers and children of Maori, Samoan, Polish and Oriental descent.
All were born within days of Prince George, but most were dwarfed by him, apart from Levi Birch, known as “superman” because of his prodigious strength and size.
Prince George had no fear in pulling himself up towards the other children – and stealing their toys.
His mother watched on protectively, occasionally wiping some dribble from his chin, as the Duke chatted to some of the other parents.

I don't think Our Kate has ever had a Welcome like this one before ! 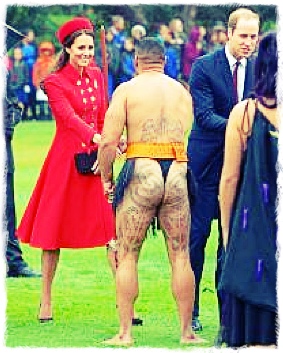 Prince George is adorable, he was to spend some time today with lots of babies his own age who were carefully chosen to have a playdate with him -

What a cute baby!

I love this couple: william and Kate, they were made for each other

I agree Catwoman . I love her coat and hat .

Yes, I saw these pics before. The Little Prince is adorable.

Actually, I'm happy Joanna posted this link (even though it is not linked to GC), because I wanted to comment something.

I watched the video of Kate, William and George's arrival. Kate was walking down the stairs, exiting the plane..I am so impressed how she managed to walk in such high heels down the stairs, carrying the baby in her arms, with such light step and confidence! I think this is amazing!

I am still trying to walk in high heels but it's difficult because you lack stability.

Wouldn't it be great if George Clooney and Prince George meet?