Research firm Wealth-X determined which past Academy Award recipients have the highest net worth.


Sandra Bullock may be poised to make at least $70 million from her Oscar-nominated role in Gravity, but she's already the youngest Oscar winner with a net worth of more than $150 million, according to research by high-net-worth firm Wealth-X.

Bullock is tied with Robin Williams in 10th place on Wealth-X's list of Oscar-winning actors with the highest net worth. They each have an estimated net worth of $150 million. She's also only the second woman on the firm's top 10 list. Barbra Streisand is tied with Robert De Nirofor third place with $310 million each.

The Oscar winner with the highest net worth is Jack Nicholson, who has $390 million and three Oscars to his name, most recently nabbing the best actor prize for his role in 1997's As Good as It Gets.

Wealth-X's list is based on its proprietary valuation model, which it used to assess all asset holdings, including privately and publicly held businesses and investible assets.

Wow, I think I read a couple years ago that George's net worth is around 150 million.

Last year his net worth was $180 million according to Forbes. I wonder if the new figure includes his money from "Gravity". 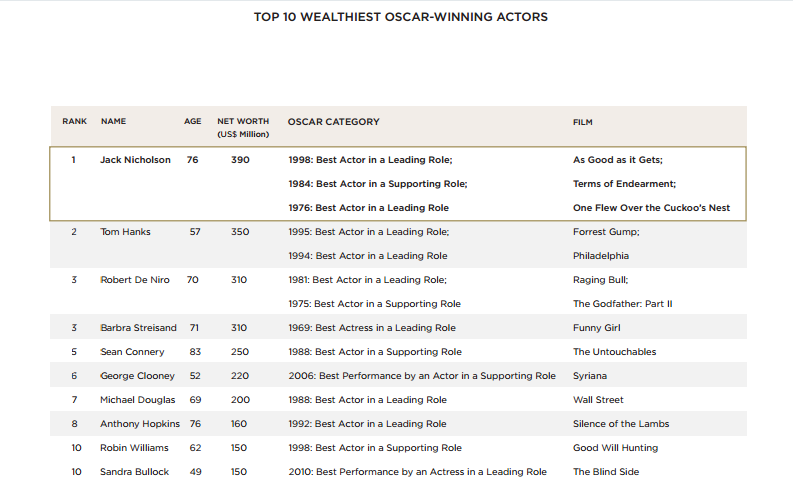 LizzyNY wrote:Last year his net worth was $180 million according to Forbes. I wonder if the new figure includes his money from "Gravity".

I don't think he earned that much from "Gravity"...maybe they include the upfront pay from "Tomorrowland"? That would make sense.

@Sevens - There's a $40million difference from last year. I don't think the up-front from "Tomorrowland" could be that much. I'm guessing the new amount includes "Gravity", "Tomorrowland", money from commercials and ads and profits from Casamigos - if they got their info from his tax returns it would include everything. He must get a HUGE deduction for charitable contributions!

Does the "net worth" on that list include property etc etc or just liquid assets ?

at the bottom of the link it says:

Wealth-X Research uses a proprietary valuation model to assess all asset holdings including privately and publicly held businesses and
investible assets to develop our Net Worth Valuation.

Did it answer your question? Not sure....

right
how can they know all of their income etc?

George is only worth $220 million?  I would have thought it was higher.

Heck, if I won one of these lotteries that have been hitting $600+ million I would be worth more than George!!  Imagine that.

Yea, and my winning the lottery has higher odds than George marrying again.  Can't take either to the bank!  HA!

But this does answer the burning question: Why the f*&K would anyone want to bang Jack Nicholson?

@It's Me - They might have access to his income tax records, or they may follow the public records of all the business transactions he makes - movie payments, ad revenue, business investments, real estate -I think most of that information can be traced publically. Or - it may just be an estimate of what he's worth. - They're not telling how they know.