Amy Poehler was on the new Late Night with Seth Meyers....he brings up the prank war:

Ever since dropping that amazing joke about George Clooney during their opening monologue at the Golden Globes, Tina Fey and Amy Poehler have been feeling the Oscar-winner's wrath in what has snowballed into an all-out Hollywood prank war. Now, it appears Poehler has finally had enough.

"I want to say something to George Clooney that no woman has ever said: 'George, please stop,'" said the comedian during an appearance on Seth Meyers' late-night debut on Monday.

And hey, I know how she feels, because when I was in a prank war with George Clooney it......oh, ok fine, I was never in a prank war with George Clooney. That being said, I am absolutely, totally, 100% down for it. So how about it, George? Prank war? You know, as long as it doesn't cost too much money? And also as long as we can be friends after, and I can hang out at your house and stuff?

I moved it from the news section to this one. Hope it's ok.

You are right Joanna, she must be scared but she was still funny

About George at 2:10 minutes 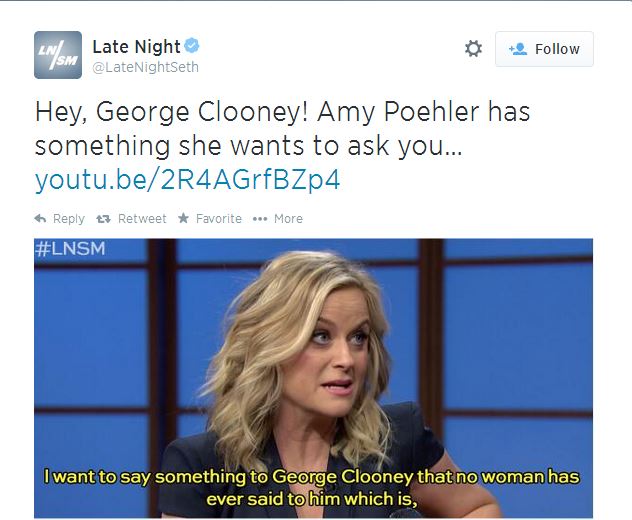 Merged thread, saw too late that we got it already LOL