Just embedding the YouTube link. Currently looks like three hours to go. I'll be at work. Hopefully, there will be some video afterward. Thanks for the link!

Thanks It's me and Lorna for the link!

I don't understand. When I click the link it starts counting backwards, so it seems like it is 1,5 hours to go. But - on this Twitter pic, George is already on the red carpet!

What do you think? Is this the right link?

I am clicking the link .

I can't watch the link due to restriction rights in my country. That sucks

thanks for the links

Aparently 'RTL' is a french radio, on the comments below he says something like "a little taste of "LVT", tomorrow at 9h.
Another pic of Dujardin

Georges and I. #WhatElse? #RTL pic.twitter.com/kBeQ052obp

Thanks PAN, I opened a new thread so it doesn't get mixed up with the premier.

I am just watching it.....George is Absolutely Beautiful

Somebody knows when does this tour end? Is Paris the last city?

Maybe he will be in Ghent ? Who knows ?

Again I missed it....was able to rewind some....thanks for posting everyone!

@Atalante wrote:Maybe he will be in Ghent ? Who knows ?

Totally agree, Butterfly. He looks happy and relaxed and joyful.

Lovely the link has the full video recorded! Yipee!

Yeah I can now watch the recorded version too. He was in a really good mood. And it was raining a lot ...oh boy....

Here is the link it's me

I could not watch it direct from the link due to restriction in my region. If you got the same problem got to www.hidemyass.com and enter the link in the search option and then you can watch it. That's how I did it.

now I know I saw him from the beginning !!!

Those eyes, that smile - thanks a lot ladies

George with a glass and doing a strip !

I agree with Butterfly & mosaic too.
He looks much more at ease in Paris. Perfectly dressed at Premiere too.
Maybe because promotional tour is wrapping soon & he can unwind.
Or was preoccupied by other issues in London.
Like maybe media coverage about his comment re: repatriation of sculptures.
Or other matters... He looked tired, bored, irritable at times. Smiled & polite though.
It was brutally cold there too.

Said he was sharing rooms with Bill Murray, so probably got to hang out & have a few drinks after the premiere.

Whirlwind tour. One town after the other.
Like a rock band.  All boys. The Monuments Men.

Boris Johnson, Mayor of London, politician, journalist and historian with European ancestry has waded in now:

That Greek reporter really opened up a hornet's nest! The return of the Elgin marbles is a valid topic for discussion, especially as Greece is trying to reassemble as much as possible of the Parthenon, but I wish George had not been dragged into the discussion. Its been going on for years and will probably go on forever. - The only upside to his being involved is that they're asking him about the marbles and not who he's sleeping with! LOL

Found another one on youtube, love it when they scream "look up"

@party animal - not! wrote:There's also a Youtube video now of the cast leaving the tv studios after recording Vivement Dimanche.......

Thanks PAN, opened a new thread and posted the videos

Clooney voiced his opinion quite clearly about the artefacts taken from the frieze, at the Belrlinale.
Even when he slightly defensively backed his statement in London by saying he didn't know too much about it, he put himself in a spot because it basically compromises his origninal statement. Then Matt Damon backed him jokingly, " what does he know? He's just an American."   Bringing lightness to the defensive British journalists.

Boris Johnson, mayor of London, would vehemently contest the Elgin Marbles returning to the Parthenon. It's in British Museum's interest to keep their collection. Might open up new repatriation cases.  His ridiculous statement  that Hermann Goering would have returned them to Athens, hence Clooney is sympathizing with the Nazis makes Boris Johnson sound like a total simpleton.

However, the Elgin Marbles (or more correctly the Ancient Greek Parthenon sculptures) were taken from where they belonged in an opportunistic act of pillage, permitted by an invading country authority.
So, George Clooney, Bill Murray & Matt Damon see the that there are similar injustice looting parallels to what the Monuments Men tried to preserve.

And it sure generated an avalanche of publicity.

@LizzyNY wrote:That Greek reporter really opened up a hornet's nest! The return of the Elgin marbles is a valid topic for discussion....

Me too on this forum; before her.

After seeing clips of press conferences, premiares here and there one thing surprised me. It was good that they all have been there, incredible support group for him of course,
but...

I got an impression (could be wrong) that they were somehow unprepared for the event. What became inevitable was that Clooney outshone them all. They are good actors and stars themselves, but in the same room with Clooney something happens. And there he is all humble and appreciative, trying to remind the press that there are other people here... you know.

After seeing it I don´t think people should go to press conferences with him expecting to draw much attention or journalists to be interested in them any more than, let´s say, someone would go to Alabama expecting French-Thai fusion cuisine. There is just not such opportunity. This MM tour serves as a proof for it.

Some questions showed that the topic went way over some journalist´s heads. Yep and one loaded, old, worn out question about marbles... god damn it, other mongorians are copying and reporting it too! Nice.
Just my 2 kopecks.

Despite the blitz of Qs, one controversial stood out & created furor.
Yet, the film was partly filmed in the beautiful English countryside.
You'd think the press conference in London would have concentrated on that.
After all, it promotes the country & filming there too. Duxford in Cambridgeshire, Hastings, Rother in East Essex, Bramely in Hampshire, Fingest Village in Buckinghampshire (doubled as French farmhouse), etc

@Carla97 - Damon is on a par with Clooney in terms of A-list status, I think. Plus he's a huge box office drawcard.
It's just that this film is more attributed to Clooney.
-Director, actor, writer.
So maybe that's why he had more Qs addressed to him.
But I agree. Would have loved more participation by others involved.
The cast is amazing.

he was great in telling ppl there was not only him !!!

Not sure if these posted:
George Clooney & Matt Damon bring Monuments Men to Paris. 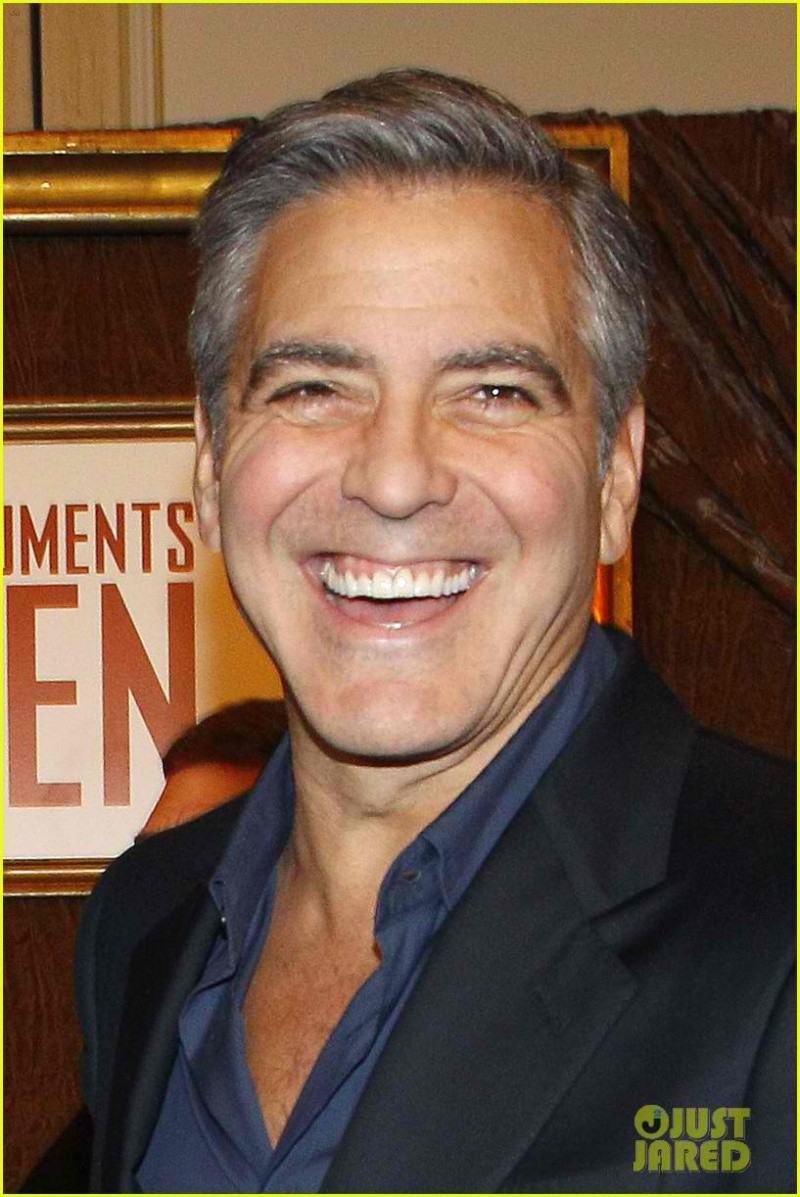 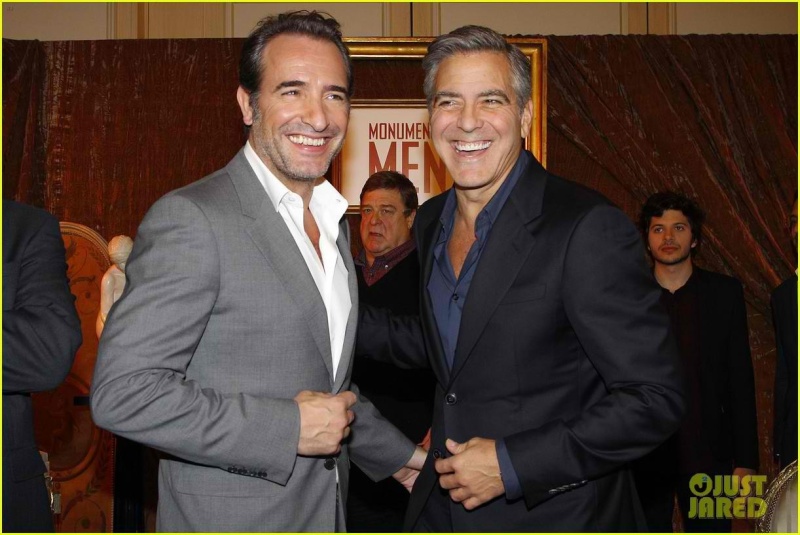