Below is the article and below that I copied the description from Wikipedia what the Nebra sky disk is. If somebody is interested. 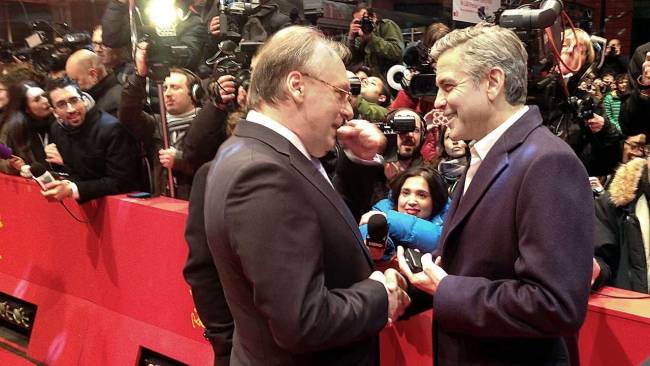 The case with the 10-Euro coin brought Reiner Haseloff (59, CDU) for George Clooney (52)

The "Berlinale Palace" at Potsdamer Platz on Saturday. Shortly after 18.30 clock Reiner Haseloff hits (59, CDU) with Clooney on the red carpet.

"How do you DO. . Nice to see you "Saxony-Anhalt's Prime Minister has a case for the director of" Monuments Men "here - and his wife on the side. Gabriele Haseloff (58) snaps eagerly with the mobile phone while her husband handed over to the star of the premiere evening the gift: the 10-euro silver coin of the Sky Disc of Nebra.

A hint, hint. "I thought that it would be interested as a film material," says Haseloff later told Bild. And, indeed. Clooney is interested, George listened to the short explanation about the crime to the 3600 years old treasure. 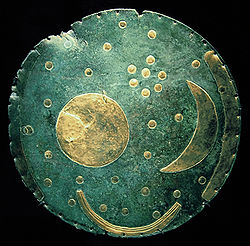 The Nebra sky disk is a bronze disk of around 30 cm diameter and a weight of 2.2 kg, with a blue-green patina and inlaid with gold symbols. These are interpreted generally as a sun or full moon, a lunar crescent, and stars (including a cluster interpreted as the Pleiades). Two golden arcs along the sides, marking the angle between the solstices, were added later. A final addition was another arc at the bottom surrounded with multiple strokes (of uncertain meaning, variously interpreted as a Solar Barge with numerous oars, as the Milky Way, or as a rainbow).

The disk is attributed to a site near Nebra, Saxony-Anhalt in Germany, and associatively dated to c. 1600 BC. It has been associated with the Bronze Age Unetice culture. The disk is unlike any known artistic style from the period, and had initially been suspected of being a forgery, but is now widely accepted as authentic. In June 2013 the Nebra sky disk was included in the UNESCO's Memory of the World Register.[1]

Did you read the rest about its history?  It, too, was looted.

wikipedia wrote:   The disk, two bronze swords, two hatchets, a chisel and fragments of spiral bracelets were discovered by Henry Westphal and Mario Renner while treasure hunting with a metal detector in 1999. Archaeological artifacts are the property of the state in Saxony-Anhalt and the hunters were operating without a license and knew their activities constituted looting. They damaged the disk with their spade and destroyed parts of the site. Already the next day, Westphal and Renner sold the entire hoard for 31,000 DM to a dealer in Cologne. The hoard exchanged hands throughout Germany over the next two years, being sold for up to a million DM. By 2001 knowledge of its existence became public. In February 2002 the state archaeologist Harald Meller acquired the disk in a police-led sting operation in Basel from a couple who had put it on the black market for 700,000 DM.[2] The looters were eventually traced back. In a plea bargain, they led police and archaeologists to the discovery site. Archaeologists have opened a dig at the site and have uncovered evidence that support the looters' claim in the form of traces of bronze artefacts in the ground, as well as matching earth samples found sticking to the artifacts. The disk and its accompanying finds are now in Halle in the State Museum of Prehistory. The two looters received a four months and a ten months sentence by a Naumburg court in September 2003. They went into appeal, but the appeal court raised their sentence to six and twelve months, respectively.

The discovery site is a prehistoric enclosure encircling the top of a 252 metres (827 ft) elevation in the Ziegelroda Forest, known as Mittelberg ("central hill"), some 60 km west of Leipzig. The surrounding area is known to have been settled since the Neolithic, and Ziegelroda Forest is said to contain around 1,000 barrows.

The enclosure is oriented in such a way that the sun seems to set every solstice behind the Brocken, the highest peak of the Harz mountains, some 80 km to the north-west. It was claimed by the treasure-hunters that the artefacts were discovered within a pit inside the bank-and-ditch enclosure.

It is a gorgeous piece. I would love to know what the ancients had in mind when they crafted it.

I'm a little exhausted today....so they gave him an artifact? It is beautiful but not sure I understand what the story is about.....

It looks like it, and probably because it was found in the Harz Mountains where the Monuments Men was shot.

Wonder if he'll loan or donate it to a museum

Thanks IM. I was also wondering why they'd give such a precious treasure to George Clooney for! A commemorative coin makes much more sense!