Live link on now. Swamped by photographers and long lenses practically falling in their laps!

So far all I can see on the live stream is the back of a LOT of journalists and then a line of what looks like photographers on the stage? Can't see any of the actors in the film.

And now Stan and a woman I don't recognize. George and Grant just entered.

They're asking the photographers to sit down. Someone is signing (not very well by the way - think it may be Bill Murray).

They're introducing the panel. Everyone just nods, Bill Murray stood up!

what is the pin he is wearing?

Statement from one gal was funny. She said that George was helping the mental health of many women in the world including her.

@silly girl wrote:what is the pin he is wearing?

The pin looks like the bear logo that's in the background.

I wish they would ask others some others questions...

Bill Murray just asked the moderator "Jenny?" if she had a question for Hugh Bonneville.

So she asked him if he's have a glass of champagne with her outside.

Get the feeling she's a HUGE Hugh fan and Bill was trying to get her to admit it!

I know.  Huge stars in their own countries on that panel and not one question for them. George did make the comment though that there were other people on the panel. And he did try to deflect some of the questions to others to answer.

But then again, the reality is that this IS George's film. Wrote, produced, directed, acted. (Yes Grant was a big part too but Grant is not a huge international star like George).

So I guess the focus would be on George for the different media representatives that basically only get the one question and everyone is aware that THE quote from George is the one that gets the attention.

I mean, how many in people know who Jean Dujardin is? I'm afraid probably not many. But then as the gal from Chinese media states, George is known in China so his is the quote that they're going to be looking for - George Clooney said to ME or to OUR reporter... makes it more news worthy.

Thank you, Berlinale for a great link.....the media scrum really is that!

Shame the Greek reporter didn't address a question to the Greek actor!

It happens always with him, he can't help it really, I noticed that Grant is doing a lot of the interviews now too, but it wont be noticed as the ones with Clooney, and they know it..

I think they should make a point of telling the reporters to mix it up a bit....

Oh and I knew the question from Greece would open a can of worms:

All in all nice to see the press conference even if we already knew most of the answers.

Himself mispresented again in the tweet headline. What he said, when asked, was that he thought it would be a good idea

No wonder the photographers took so long - they were doing a conga!

I missed the red carpet/press conf. this afternoon. Somebody knows where is the video recording of this? I was looking for it on the website of Berlinale but couldn't find it.

some photos from francis100 links above 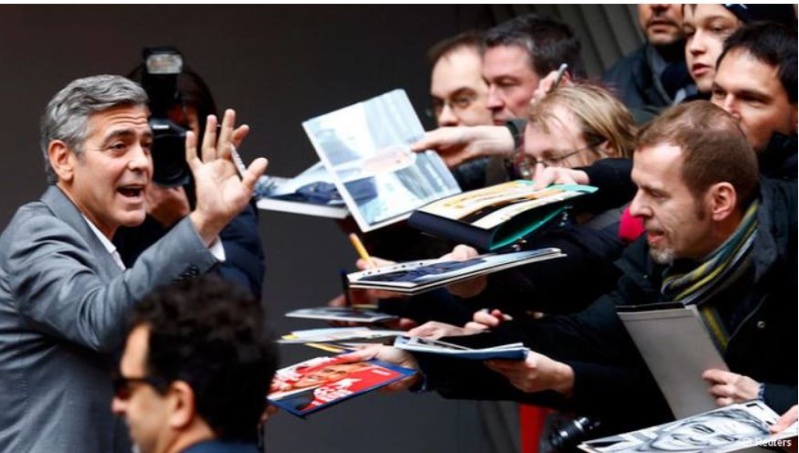 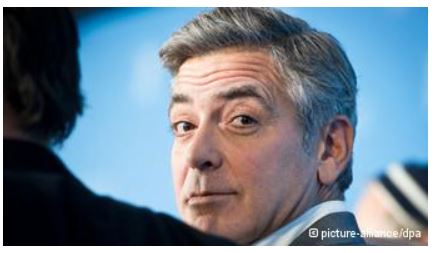 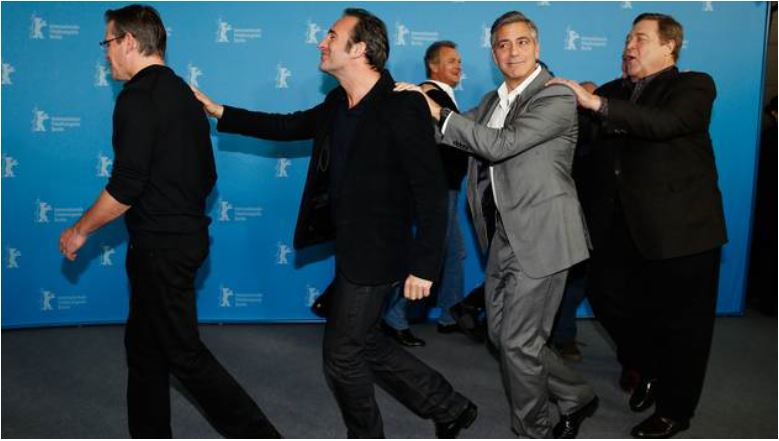 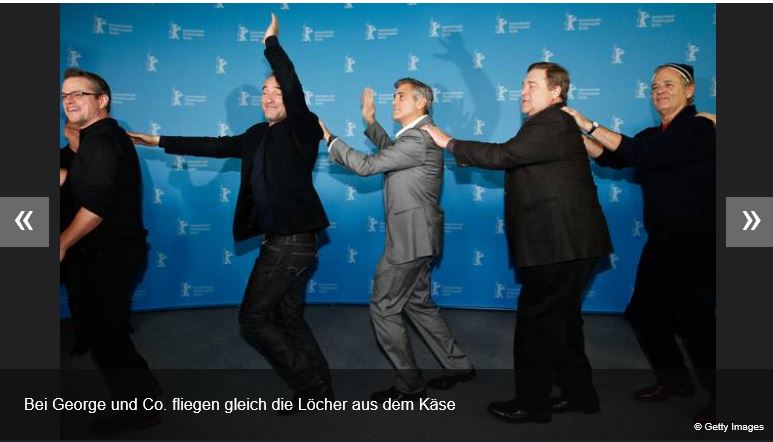 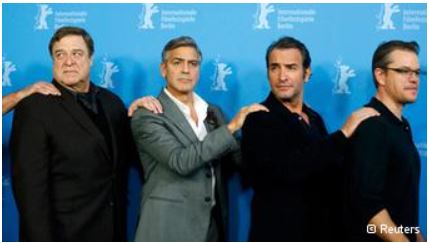 Thanks for the video Atalante.

Thanks Atalante....was hoping we could watch again...

By the way, the press conference was really weird. We had a live screen and watched it and everyone was asking so stupid questions. And there was this one girl, not sure if you saw that (I'm too tired to check on you tube) but she looked like a prostitute and talked very "vulgar" starting with bill Murray how he and the rest look so good after drinking last night so much Champagne and she still has an hangover. And Bill said something like "this is no issue which belongs here" and she responded something " it is an issue for me".  That was really weird for everyone....

Yep, saw the press conference - not sure which media outlet she was from!?

Thanks from me too!

The girl was from "Bild Zeitung" a former "It-girl" ... classy E-category starlet. Known for being extreeeeemly stupid, so a perfect match for that newspaper. I'm quite sure she was trying HARD to get their attention the night before, what probably didn't work out. I can't even remember her name, even if she was molesting the german public with her existence for quite some time.
In general, this press conference was clearly embarassing for all the reporters putting out their stupid questions. Maybe it was caused by a casual brain disfunction that goes along with meeting George Clooney.

Well I saw a glimpse of it last night on italian speaking channel. What I could understand they talked about Elgin marbles. Greece wanting them back from Britain. It has nothing to do with nazi looted art. It happened 200 hundred years ago, during Ottoman empire...

Legally, there is no basis for return. Greece or any other country for the matter, wouldn't be able to get any of the looted art back under any convention such as UNESCO's 1970. Out of free will is an another thing...

Then they went on comparing it with Sion Treasure from Turkey, which happens to be in Washington D.C. now (and rest of it in Antalay Turkey). And Nefertiti bust which still remains the ambassador of Egypt in Berlin... I guess list goes on and on. The Westerners had looted the world in last 4 centuries and have been looting this one too.
Slightly difference is that this one uses financial tools. To sort all that out would be a one never ending press conference LOL

So yes, if it was like that the whole press conference, reporters with stupid questions, I guess it gave them an oppurtunity to push their own MM agenda on as they wished. Harder to do with sharp reporters.

I like the little gold bear on the microphone.

Singing at the press conference:

Look, the Euronews released one part of the same conference :http://www.euronews.com/2014/02/09/george-clooney-talks-marbles-elgin-marbles-at-berlinale/

Do we have a full video conference somewhere?

@Butterfly wrote:Look, the Euronews released one part of the same conference :http://www.euronews.com/2014/02/09/george-clooney-talks-marbles-elgin-marbles-at-berlinale/

Do we have a full video conference somewhere?

Um at the video at the top of this thread...

Oh wait you said FULL video. Sorry. So far I haven't found anything not to say it's not out there though.

Might be be fault, Lorna. Put a few links in the Berllinale thread - not sure of they're complete conference, but the live link for it all is there

Yes, I have found the full length video here: http://www.berlinale.de/en/im_fokus/videostreaming/2014/long_versions/20147918_pk.html

I recommend watching it. It's different when you see the whole event, compared to short excerpts. I noticed that every journalist had a question for George Clooney. Perhaps one or two for Matt Damon. I had a feeling that other actors felt neglected, because nobody asked them anything. George noticed this, so he told journalists something like: there are other people than me here...But, they continued to communicate just with him.

Also, it's interesting to see the colorful characters asking questions...

By the way, dear mods....is it possible maybe to separate this thread in two one for the conference and one for the red carpet premier? Just a suggestion. Makes it maybe easier....If not then it is ok too. Just a thought.

Maybe the post from the conference can be moved here

Have moved Nicky, will check again to see if there are more posts

@silly girl wrote:---his agreement about returning the Elgin Marbles to Greece made me want to read more about the argument.  It is only the Marbles that Greece wants returned...I knew about it previously but had forgotten the details.  I remember when I first heard about it I felt bad they wanted it back...dare I say with age does grow wisdom and now I have changed my mind....it would be a great goodwill gesture and might help Greece's economy.

“I think you have a very good case to make about your artifacts and I think it wouldn’t be a bad thing if they were returned. I think that’s a good idea,” said Clooney but what about proposals on how to achieve that enquired the reporter.

Lord Elgin removed the sculptures from Athens when he was serving as British ambassador after he obtained permission by the Ottoman Empire. (Greece was under Ottoman rule then.)  Circa early 1800s, then he sold them to the British government who placed them in the British Museum.
The arguments are multifold. Greek conservators, backed by the actress Melina Mercouri's Foundation, who strongly advocated their return, further claim that the sculptures were irrevocably damaged by poor preservation cleaning methods.  The British argue they legally acquired them.
Others state that they were protected during Greece's war of Independence against the Ottomans, a few years after Lord Elgin took them. Also, during other wars that followed like Italian invasion in WW2 & then the Nazis...  Plus they were protected from acid rain and pollution.

Greeks have contested their return for 200 years as they're iconic ancient sculptures intrinsic to their national heritage & identity. Symbols of their culture. Much like what is argued in Monuments Men.

It won't boost their economy much, silly girl. Tourism sector is already amongst highest in the world due to islands. A new modern archeological museum was built for them a few years ago.  But it would spike tourism more.
It's a complicated matter.

Moved all the conference post from the thread below

to this existing thread 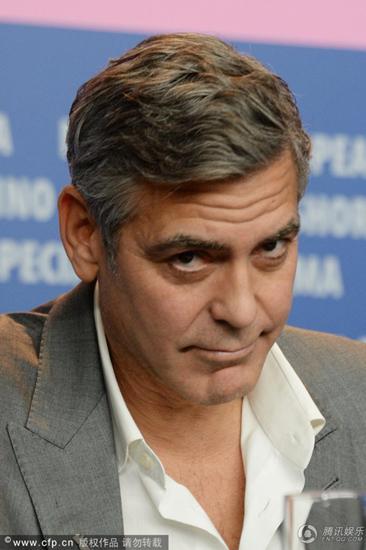