@nischelleturner I want to know why George Clooney gave you so many kisses! #themonumentsmen #nyc pic.twitter.com/xoo6WEMXGd 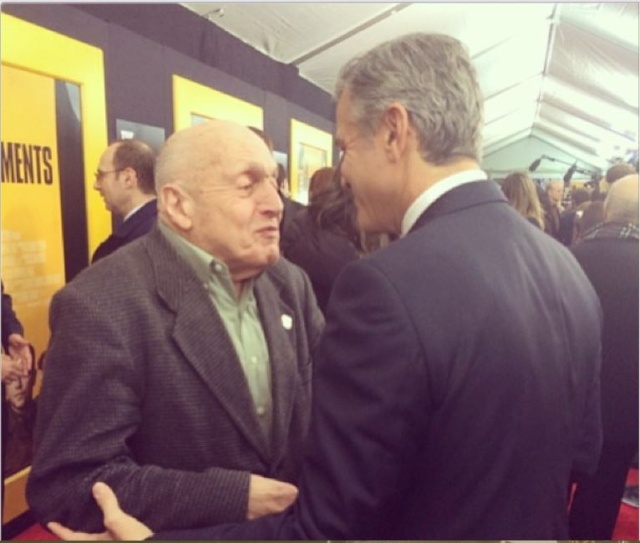 He's 88 years old living in a retirement village in New Jersey, so thankfully he didn't have too far to travel to attend.

That's wonderful he could make it. Love to hear his comments on the movie....and behind the scenes stuff that you never get to hear about....

Hopefully film is applauded to a standing ovation.

caityh436
31 minutes ago
George Clooney on the #MonumentsMen red carpet premiere in #nyc. The sweetest guy to interview! 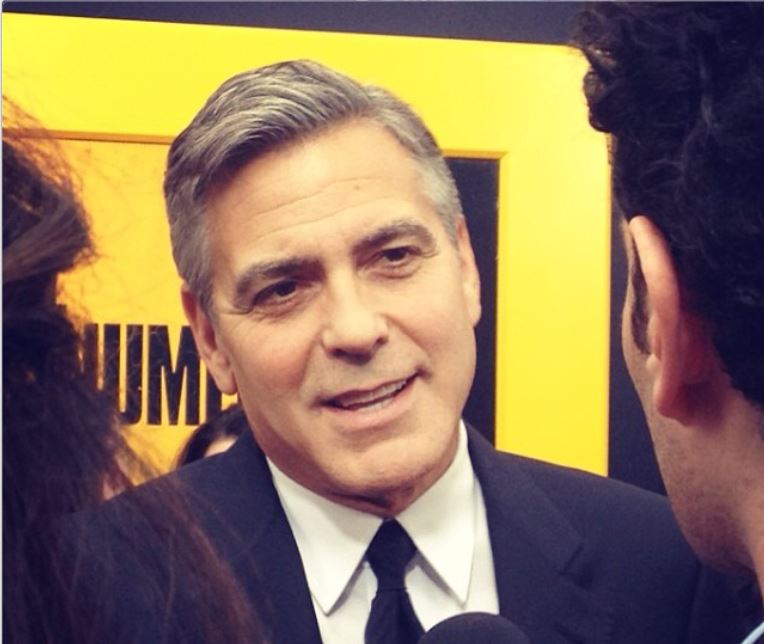 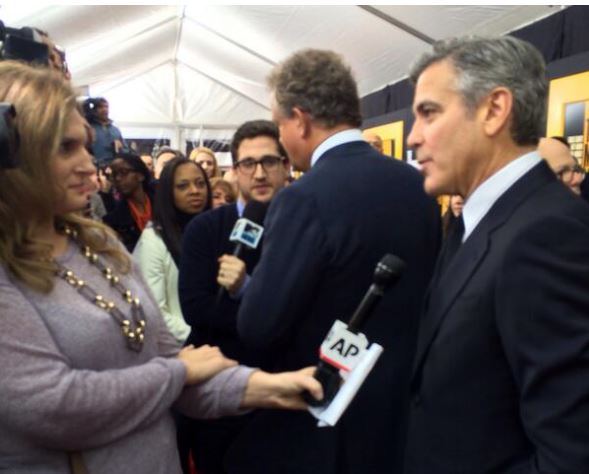 A few pix on Getty Images. Our Hero with John Goodman, Jean and Victoria with Stan.

Just got home from the MM premiere. Thanks to the NY subway system my 45 min. trip took over an hour, so I didn't see George arrive, but I did get a really good look at him (through plastic) from about 8 feet away. He is definitely the handsomest man alive! He was laughing and talking with the photographers on the red carpet (who were lined up between him and the street - the fans were behind a barricade on the other side of the street, where they could see absolutely nothing but the security men and the police. I stayed on the sidewalk outside the red carpet talking to the police and security guards for over an hour, so they didn't chase me away and I had a closer view, but getting pictures was impossible because the press was in the way.
Anyway, he looks wonderful - happy and rested. I hope he's still smiling after the movie. The reviews haven't been great. Also caught a brief glimpse of Matt Damon and a good look at John Goodman (who I love). Later Kate Blanchett arrived, wearing a black beaded dress. She is absolutely stunning. A man standing nearby said she didn't look real - she looked more like a Renaissance painting.
Towards the end also saw Oprah's BFF Gayle King and the designer, Vera Wang (who is the skinniest woman I've ever seen!)
One woman I met had come from seeing George on the Letterman show. She only got the tickets LAST WEEK! When I went on the site they said there was a 6 month wait. Phooey! She said it might be possible to see the movie tonight as they were looking for "fillers" for some seats, so to anyone who is going to any of the other premieres, it might be worth a try to get in to see the film on the night of the premiere.
Got home and found IOM is on tv, so of course I turned it on, then Letterman later. I'm having a George orgy tonight! WWHS, thanks for the encouragement. I wasn't sure I would go because the weather is so crummy, but I'm glad I did. It was fun, and I got to see George live and in person - probably for the only time in my life. YAY! Good luck to everyone else going to the other premieres.

Congrats Lizzy and thanks for the commentary! And thanks to everyone else for the wonderful pics!

Glad you had fun Lizzy....thanks for the eyewitness report!

Thanks for the updates, everyone!

He looks great, as usual!

Lizzy thanks so much for such a detailed report!

I hope somebody will put the Letterman show on You tube so that people without American channels on TV can see it too.

GC looks great at usual. I like Nick Clooney very much.

Just looking at the shots on Wire Image (thanks Silly Girl) and Getty - It was interesting to see that Ellen Barkin, Richard Kind and Alfonso Quaron were there (I didn't see them). - Talking to one of the photographers after the red carpet - He said the media really only wants pictures of the women - he can't "sell" the men. I told him if he's selling George, I'm buying.

Thanks everyone for the pictures. George looks great like always

and Lizzy thanks for the report. Very interesting

@LizzyNy Fabulous, not you average Tuesday night!
So glad you went and experienced "Clooney-Dom"
Great report!...x

He gave autographs at the premier

Video found on twitter, interview on the red carpet

Don't know how to copy the video in here

Thanks for ALL the pictures, videos and report from
our Roving Reporter !
Our man looks good.....I bet he was nervous.

Thanks so much, Joanna. The "Just Jared" photos are amazing! It's such a miserable morning here, those pictures were a gift to brighten up a truly dismal day .

Page Six has his quotes at the premiere about PSH:

George Clooney paid tribute to tragic Philip Seymour Hoffman at the premiere of his own movie “The Monuments Men” on Tuesday night.
Clooney started his introduction for the film at Ziegfeld Theater remembering the actor.
“I wanted to start by saying it’s very odd to be here in New York, particularly a couple of days after a good friend of ours has passed away. It makes it difficult, and I think it’s the elephant in the room for a lot of us here. It’s senseless and it’s sad, but he will be greatly missed. Phil will be greatly missed. It’s hard to be here tonight with that . . . weighing over us, but I wanted to say that.”
Clooney had earlier told red- carpet reporters that he’s struggling to come to terms with Hoffman’s “senseless” drug-overdose death.
Clooney said, “Phil is a good friend to a lot of us in the community. And it makes it very difficult to be here 48 hours in this town after he died . . . everybody’s here kind of putting on a brave face to get through this because it’s a pretty traumatic thing. We’re going to miss him a lot and it’s senseless in a lot of ways . . . We miss him.”

Thanks SG, nice words he said

In some of the pictures he looked strained or cold,
so maybe it was getting to him, plus being nervous about his film's reception.
Hope he had a relaxing time with his parents afterwards.

He looked great on Letterman with Victoria and Jean .

He looked great on the red carpet, too - laughing and joking with photographers - very relaxed.

Do we have this?

Video: red carpet interview in this link. Can't copy the video but it is a nice video

Amazing selection of videos and pics, I enjoyed them all! Thank you all for posting!

Thanks everyone for the pics and the videos

I have entertainment for hours!

Funny vid LOL I mean this last one. Seems like the night was success and now I just want to see the movie

Loads of new pix on Wireimage of today's press conference at Sirius in NYC.......have no idea about copyright

Thanks PAN, here is the link

thanks all for the links

I wanted to be there, but I worked yesterday. I hope I'll see him someday. I loved all videos thanks all for the links. I bought our tickets for this Friday. I am going to see this great movie in two days. We waited this movie for 15 months. I am sure I will see a unforgettable movie.

I don't mean to be a party pooper! but it seems as though the winner only got a few mins with George and in the after party, he seems to be separated from them by something, like a VIP area? I know it was only $10 but still I thought it was a "walk me down the isle" red carpet?!! Am I missing some photos/footage to the contrary?

Did you see the GMA Lara Soencer special?

I've seen quite a few instances where George has been with "his quests" both on the red carpet and before.
I'm sure they wouldn't have been sidelined.