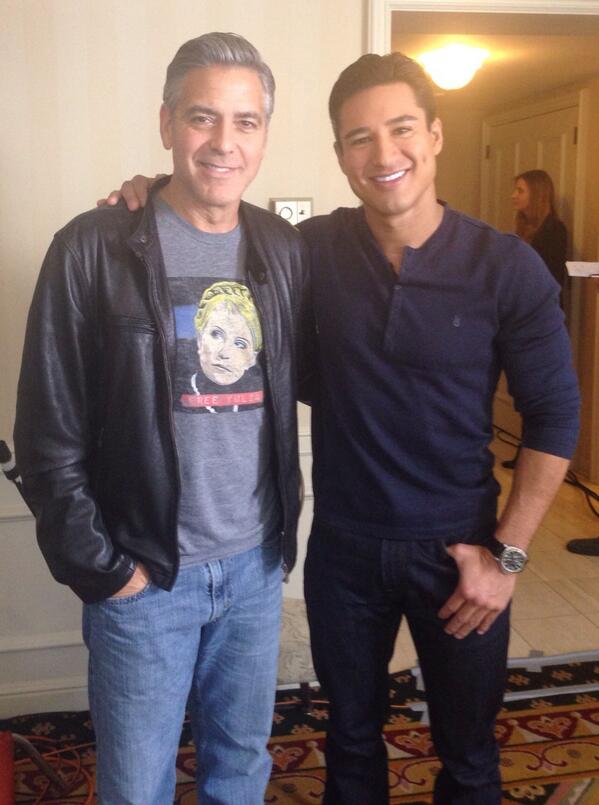 Lots of video....so funny how the different shows are talking about the same things....Tina Fey joke....Matt's pants....the "in memory of" joke on his Dad....same questions same answers. Here is Access Hollywood:

He never seems to amaze me. Who is the girl on the shirt?

@ktsue2002 wrote:He never seems to amaze me. Who is the girl on the shirt?

Your right Miss Sunshine it is Yulia Tymoshenko. Glad he is still showing his support.

Thanks for all the updates!

They all look really nice!

What is that shirt he is wearing??? What is he trying to say? To support... what?
May I ask.

I mean, she’s not exactly a model of democracy, human rights or liberal management, is she?

More like classic kleptocrat of the Yeltsin era. And she comes from Ukraine, barbaric banana republic, I mean a parliamentary republic, sorry. Her brief time abusing her position, country was left only about $ 2 billion short. (Some sources say $1.3) Not bad, but not furthering Ukraine either.

What is Ukraine? It is a country (correct me if I´m wrong) that has a rapidly declining birth rate, a mortality rate higher than most underdeveloped and impoverished African countries, the highest alcoholism and HIV/AIDS rate in Europe, and a torrential rate of emigration...

I can´t form an educated opinion whether Ukraine should join EU or Trans Caucasus. But economic reality of the country looks kind of very weak (again if I´m wrong, please correct).

Orange Revolution (you guys remember that, and don´t confuse it with Netherland´s orange festival

Disaster capitalism, economic rape of the country after Soviet collapsed (privatization of natural resources). Politics is a tool to get power and your hands on these resources. Corruption, local oligarchies, off-shore safe heavens, money laundering (not a strange concept to her as she was closely associated with Pavlo Lazarenko, who was found guilty in US for, what else, money laundering).

And we know these people love west. They walk to the bank to open an account saying they will make a transaction. How much? person at the desk asks. " A billion". Ok, just a second, let me get our advisory team here, welcome to our bank Mr/Mrs/Miss Zxhcszersc!" That is how the cash is introduced into the international financial system....then some heavy layering...

So now, she is serving her 7 years sentence. Then she is free to go, murder charges against her were dropped. Initially she was offered to return some money, odd figure (can´t be even, you know, they are superstitious people) like 123 million or 127, to avoid prison. She chose to sit in there...

What makes this case unique is that it is very rare to see a woman committing these (financial) crimes. If they free her they should free Madoff too. He got what? 150 years for $18 billion? US is worse than Ukraine in that respect. Look, 7 years for 1.3 billion, 150 for 18 billion. So?

EU politicians saying Ukraine should free her (because it is selective punishment and wrong as it is) are on the other hand in very good terms with Putin, eating from his hand. So I´m not sure she can cajole them with bottle blond braid. Maybe they are in a quandary because official sources have been quite meticulous about the case leaving everyone wonder if she is actually culpable.

Depending on who wins next election she will either stay in prison or will be released. This visible campaign is not helping her, because it would be a visible victory to an enemy for current president (who has Putin behind him). That´s my take on this. Maybe she just got too greedy, stepped on a wrong toes.

Well it has absolutely nothing to do with MM, or EU for the matter, so what I wonder is why he wore that shirt???

Got paid for it, I hope so.

Hi, Carla. Doesn't the t-shirt tie in with His Nibs' youtube message hoping that Ukraine becomes a democracy in the EU and breaks its ties (as far as it can) with Russia? Or at the very least become what the population wants it to become.

I see it as just evidence of Our Hero's broader principles in life, and expressing them as only he can. His friends in the Human Rights world are giving him more and more understanding - and therefore leverage no matter how small - in broader areas of concern, I think. And he never was one to sit back and do nothing!

Aside from politics, MM cast taped their episode with Jimmy Kimmel which will be aired 6/2 according to couple tweets..

Bill Murray wrote that in his Redditt thing he did too Boshkash.

Yeah, I've been avoiding the clips and detailed interviews because I don't want to be spoiled, thank God it's coming soon..

I read the book so I know the basic story.

Here is Entertainment Tonights video and story....pretty much the same stuff only a longer piece. I had trouble with the share and copy button.

Well I watched the interview...I´m impatient....

Yes Playful, I think that was the idea of the video (which was good).

I put a couple of articles together in the Cause... thread about the humanitarian issues on Yulia.

I'll make some time to read it! 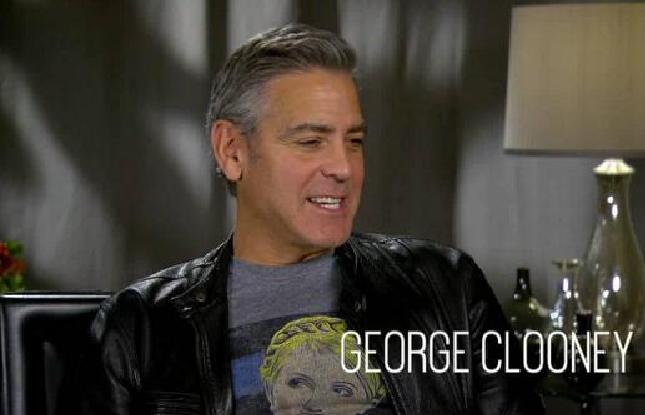 Guess who George Clooney is rocking on his t-shirt? No other than @YuliaTymoshenko! #euromaidan pic.twitter.com/GsS4ixWg7a

@silly girl wrote:I read the book so I know the basic story.

Here is Entertainment Tonights video and story....pretty much the same stuff only a longer piece.  I had trouble with the share and copy button.

Thanks SG for the videos.

Now in this video he says at the end that his dad is coming to the premier. Now does George mean the premier in Berlin on the 7th or NY on the 4th? I get confused now. I think the one in NY is just a screening but maybe I got it wrong.

Rocking on his t-shirt? Yes he is rocking but not because of the shirt. Damn.
Why not marilyn or...or... or Kate Moss? It was her birthday that day! (I know, because we shere it 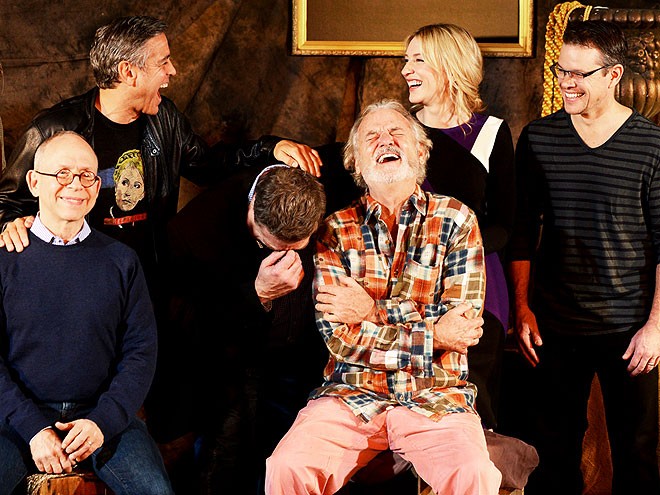 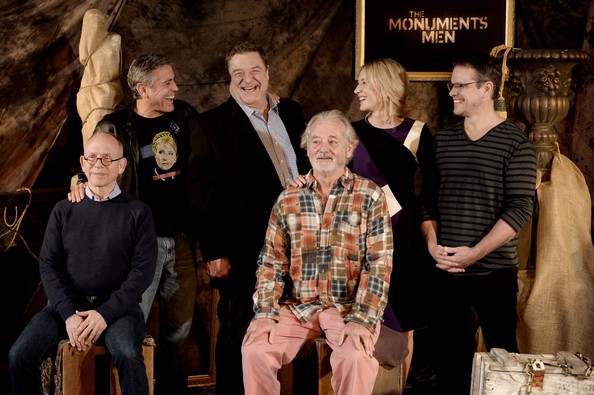 what was so funny ?

Found on les frenchies. His arrival to the four seasons 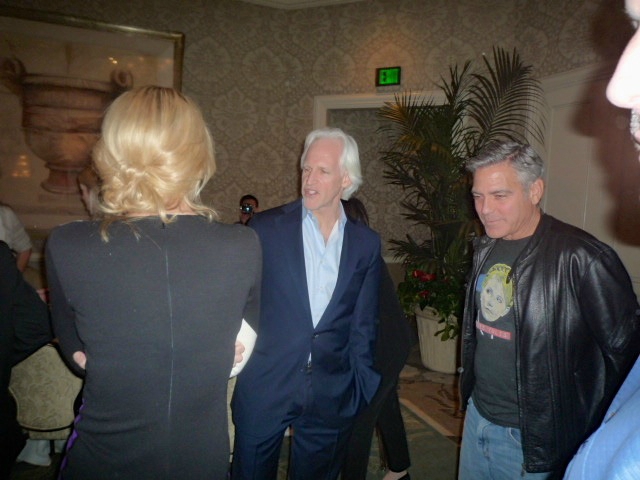 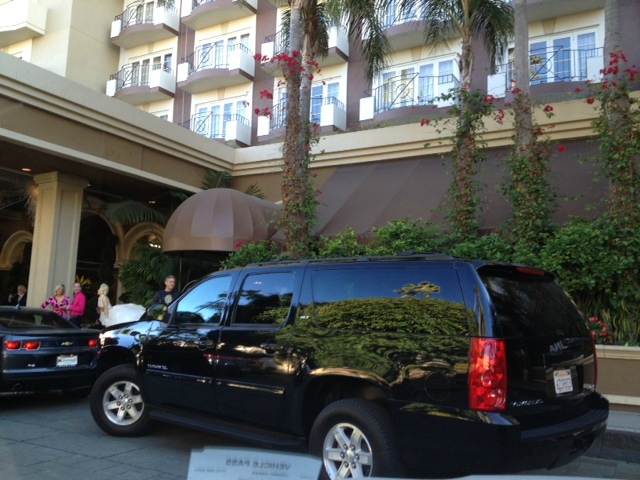 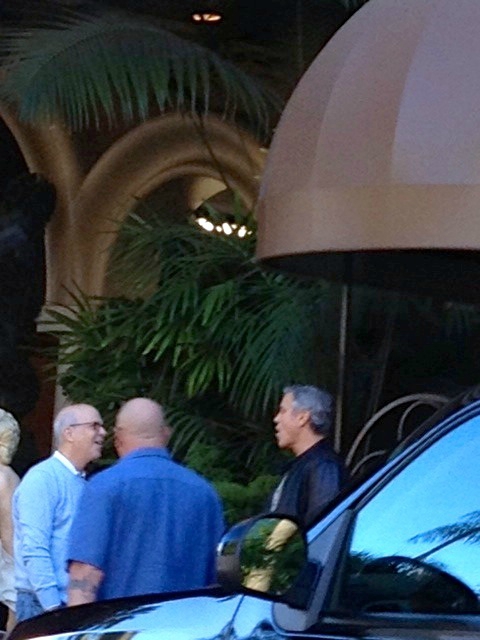 Oh Stanley is there!

Who made those pictures ?

@Atalante wrote:Who made those pictures ?

It looks like it might have come from someone in the group - you can see one of the shots was taken from inside a car with 'security pass' on the windscreen.


It's often been noted that George Clooney only seems to work with the same people over and over again. This is especially apparent while watching the opening credits of Clooney's upcoming Monuments Men—Matt Damon, Cate Blanchett, John Goodman all appear in the movie, and all have worked with Clooney (sometimes on multiple occasions) in the past.

But as Clooney recently explained to ET Canada's Sangita Patel, there's a good reason for hiring actors you have a history with: Working with your friends can be a lot of fun.

"John Goodman and Bill Murray would come to the set even when they weren't working and hang out," said Clooney. "It was a really great place to be so it made it easy to shoot."

Monument Men was originally scheduled for release in November 2013, but when it became apparent that the special effects wouldn't be ready in time, the film was pushed back to February 2014—a move which disqualified it from this year's Oscar race. But Clooney isn't one to complain. The 52-year-old actor already has two movies in the Oscar race—Gravity and August: Osage County (which he produced). In both cases, however, it's Clooney's female collaborations who seem to have the edge over him Oscar-wise.

"I've been friends with Julia [Roberts] for a long long time, I've gotten to know Meryl [Streep] over the years and I love her. And I'm happy for Sandy Bullock and for Cate who is in this movie," Clooney said of his female collaborators. "So it's a lot of wonderful, really talented women doing really well."

If Monuments Men—the only movie that Clooney has scheduled for release in 2014—isn't enough to satisfy your appetite for the actor, good news: For less than the price of a movie ticket (i.e. $10), you can win a chance to go out on a date with him.

"You and a friend will go with me to do the Letterman show," Clooney explained. "We'll go to the premier at the Zigfield in New York which is great. We'll walk down the red carpet, take some pictures, sit in the area with all of us, the actors, then go to the after party."

All proceeds will go to the Satellite Sentinel Project.

But just be sure to pay in American money—Clooney finds the new Canadian dollar bills strange and confusing.

"Here's the thing about these Canadian dollars, I was just in Vancouver, I'm surprised you can even get this thing to fold, they don't fold. And they're so clear you can see through them."

thanks for all the updates. He looks amazing!

@Atalante wrote:Who made those pictures ?

The question wazzzzzzzzzzzz: who MADE them !

Well, I could go over to LesFrenchies and search and investigate for you, but I do believe that you are capable of doing that yourself.

More from Extra...says he going to take a break after filming and promotion...

sorry don't have time to embed need to shovel....

Thanks for everything silly girl...as always you're amazing!

Thanks SG for the find....Thanks for posting the video Melbert.

Nice to watch. Good to hear he wants to take a break after all that

@party animal - not! wrote:Thank you both.

......Summer in Laglio too ? He'll be needing a good long R&R.....except he'll
most likely be working on his next project.

Yep, Jo. His idea of a break may not be everyone else's. Loves his work. Adding South Sudan to my list, tho that may have been put back a bit......such a shame with all those potential coffee plans

Great banner headline on the front page of the Daily Telegraph today:

From Blue Jasmine to The Monuments Men'

Cate Blanchett was brilliant in Blue Jasmine (saw it accidentally on a flight last Nov & liked her acting so much that I watched again on big screen). If she wins an Academy Award, (plus all her recent awards) it's additional publicity for MM, as more would like to see her next movies.

Though MM has a stellar cast & will be acclaimed in its own right as quality film with great topical & cinematographic content.

For some reason I can't get on her site..my computer freezes up....are these different than we have seen? thanks

I can see them
thanks

Sorry SG, it happened to me yesterday. I didn't post them because of the watermark, I think I can't. They're some portraits, nothing new but George looking great as usual!