This woman tweeted this --- looks like what he wore when he arrived in London:

Me and george clooney!! pic.twitter.com/7Idy7bvJH1

surreal.. 20 of us did 15 mins of recorded whistling with George Clooney only metres away laughing his head off. Another day in the office!

Hi Lakin, as far as I understand there is only one pic with the lady above. Not sure if you can see it so I post it again below. Or are you refering to a different picture???? 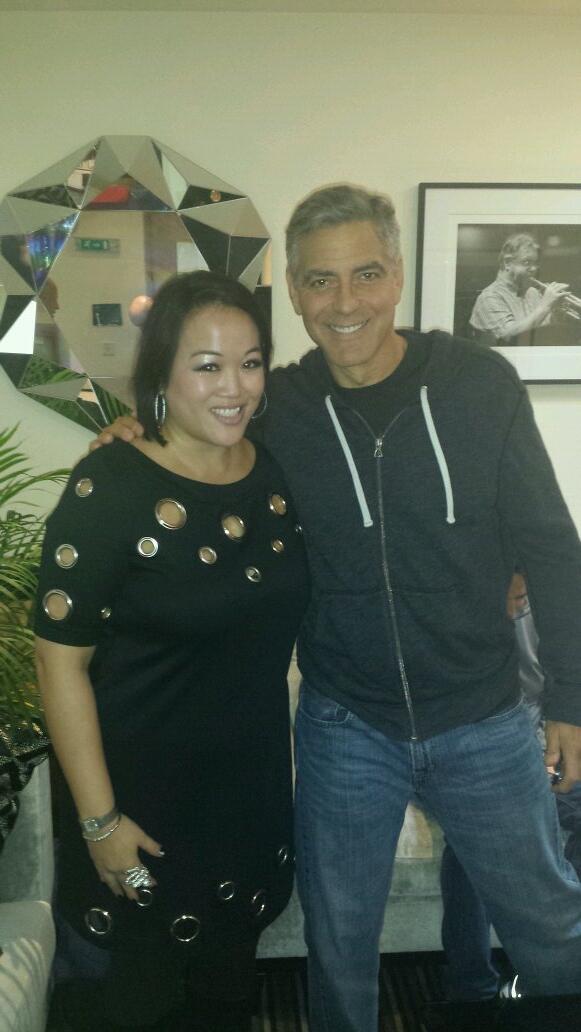 Thanks SG for this find really nice. And thanks Nicky for posting larger.

Another twitter photo with another musician...he even wrote a book:

Oh and instead of seeing him in Casamigos shirts we now just have he one sweater....he really needs a new wardrobe.... (just kidding)

The moment when you ask for someone's picture and autograph? Just happened to George Clooney- gave him my book too http://t.co/je4At3yPKp

Someone else tweeted a photo with Alexander Desplat saying he "had finished" recording...there was also another blurry twitter photo of the session but I couldn't tell if GC was in it or not. Seems they are winding down.

Thanks SG, great find. Just copy the pic again below in case someone can't see it like the first pic.

I think this pic was done on the same day the first pic with the lady was done. He has the same wardrobe on. On the first pic the Tshirt looks maybe darker but I think it is the light. I'm sure it is the same shirt. Maybe the guy just posted it later. Just my guess.

But yes I agree. He needs to go shopping hehe 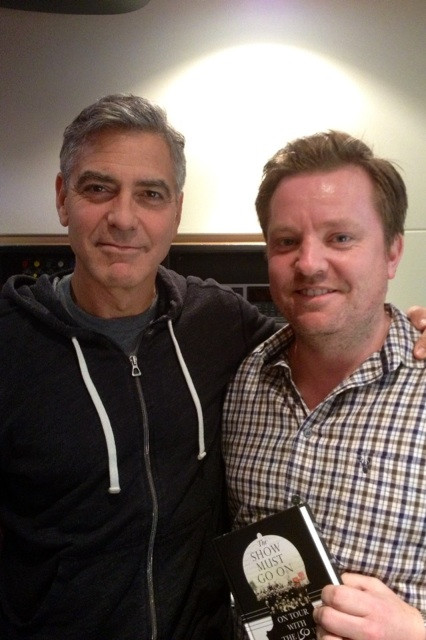 Looks a little tired. Must be very involved in soundtrack.

I'm wondering if it's an original score composition or orchestral recording of classical music.
Either way, looking forward to it.

I wouldn't worry about his clothes and he looks charming anyway.

Yes true ginga. There is always the possibility to take off his cloth hahahahahahahaha

Formal attire for red carpet.
Casual on a daily basis.

Money talks
But it can't sing and dance
And it can't walk
And long as I can have you
Here with me, I'd much rather be
Forever in blue jeans, babe

nice
is it a song?

You can see the video at the link below.

Thanks to Les Frenchies

In my excitement it's blurred! Haha thanking desplat and george clooney for a job well done! pic.twitter.com/eQdQhIRhma

Just finished the score to George Clooney's latest pic The Monuments Men with the ever debonair Alexandre Desplat. pic.twitter.com/j5xDDiyH76

I got this email (and apologies for the delay in posting this - I've been travelling) about the picture, which I hope she won't mind my sharing with everyone here:

Maxine Kwok Adams wrote:A friend linked me to this on twitter. I was in the photo with GC at abbey rd. I can confirm we were recording the soundtrack to "monuments men" and GC was at every session and v involved in how it all sounded. I think he would have been in london for at least a week. He seemed lovely, funny and charming.

He did wear the same hoodie every day!

I am in the london symphony orchestra

Such a great letter...thanks for sharing. She seemed sweet in the photo....

I swear Our Hero buys half a dozen of everything!

Oh of course he has many hoodies . Comfy .

He needs a shooping voucher

...GC was at every session and v involved in how it all sounded.

So, he even really participated in the film's music by overseeing the score.

As for hoodies, well, they're outerwear, so he may have a couple similar ones, like his jeans.

But I get the impression he tried to keep a low profile  in London to focus on the soundtrack. By wearing same style clothes everyday, paparazzi photographers would be dissuaded from pursuing him.

damn
you are right!

I went to see a movie last night ... it was soo good and the music really, really made it !!!

At the end I was interested to see who composed it...Alexandre Desplat !

George, makes such good choices, if he was dark chocolate I'd eat him

I noticed that people who met in person GC are all saying the same things: he is lovely, charming, nice to people...

I mean, we only know his public profile. He might be different privately. But - he is not.

I was missing fresh news about him...thank you all for sharing news.

Same hoodie everyday, Zut alors! Funny and it looks good
both do, the hoodie and G

Well a hoodie is like a sweater....I see nothing weird about wearing the same one everyday. When I worked in an office I kept a sweater at my desk....some days it seemed like I wore the same thing everyday. Oh and now I work part time at a clothing store where I need to wear their clothes....I can't afford them so I wear a t-shirt under the one jacket/hoodie I did buy. Although I wish I could afford to buy more because I am getting bored with it.

Back to the subject....I don't find it unusual that he is so involved. Too bad he can't get a music credit...then he could go for an Oscar nomination and add to his record....

He needs a shooping voucher

We know George wears the same styles continuously. If is hard to date some photos because of this. How many stripe shirts he must have to go with Gray Suit he wore to VFF several times. I'm sure it's right that he buys 1/2 dozen of the same thing when he likes something maybe even more. If nothing he is predictable with things that he likes.

Why is it no one has assumed that the lady in the pic is his new romantic interest????

So....his dinner out after work in Vancouver pictured with fans warranted snarky remarks, but this does not. Hmmm. I think he and a violin player would make a lovely pair.

@bamboochacha wrote:So....his dinner out after work in Vancouver pictured with fans warranted snarky remarks, but this does not.  Hmmm.  I think he and a violin player would make a lovely pair.

Hi bamboochacha we're making an effort to keep these threads on topic. Please stick to the topic and if you've got comments in that vein and want to discuss please start a thread in the Party in the Kitchen.

Lorna, that would 'vain'.

I didnt think that Bamboochacha said anything wrong. She merely asked a question. Many threads deviate a little from time to time

"In that vein" = along those lines
"In vain" = without success.

For the record, I don't give a damn about anyone's spelling ability on this site and think that people who want to correct other posters' spelling mistakes can go elsewhere to be bitchy.

We could all wear hoodies . Georgie's hoodie girls .

The first Video is old and I think it was posted somehwere here but i can't find it now that's why I repost it. And the second Video is new and came out in March this year. Thanks to frenchies